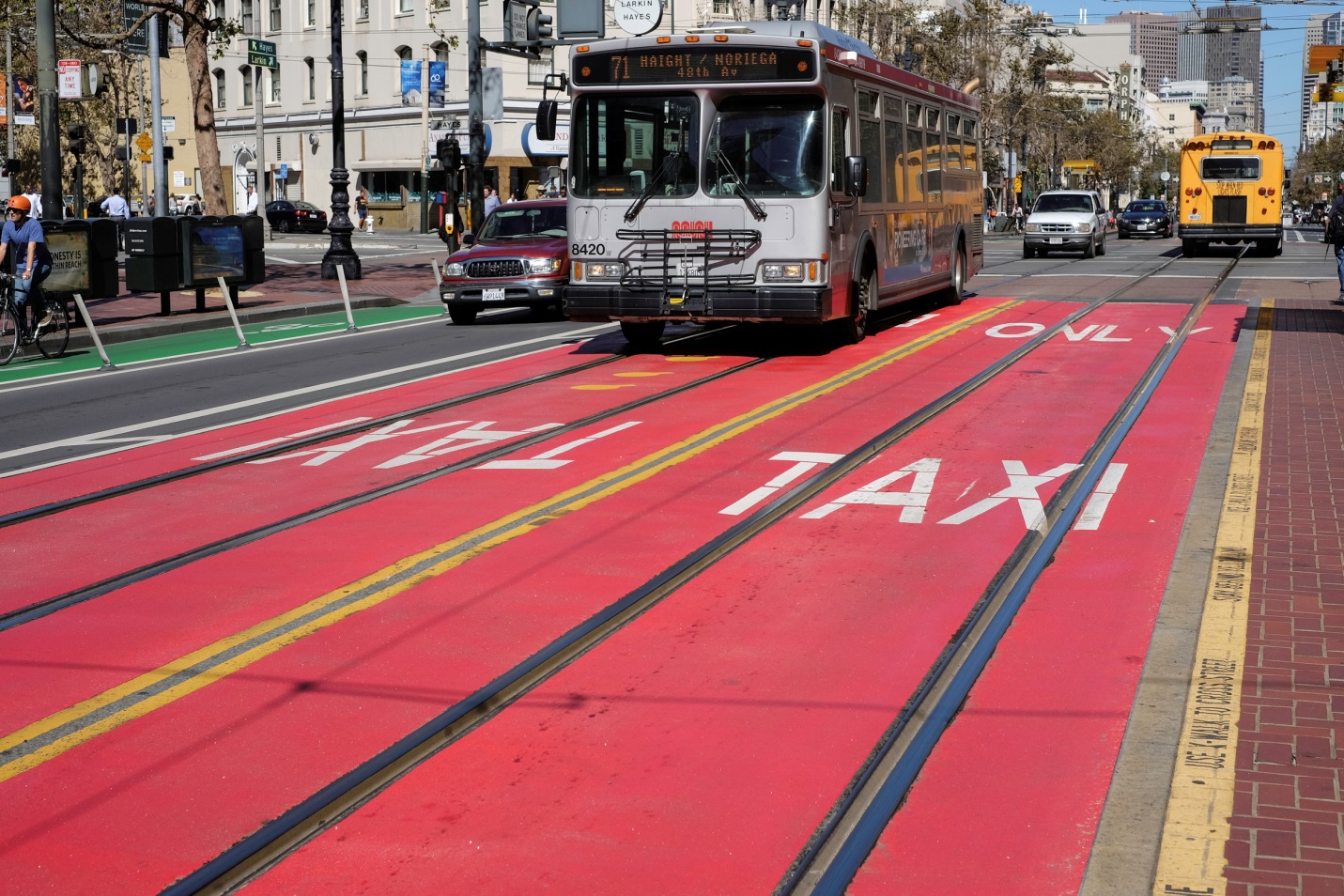 Red transit-only lanes like these will be extended down Market Street and combined with other safety measures, including turn restrictions for private vehicles on a five-block stretch. (SFMTA Photo)

More than 160 people were injured in traffic collisions on Market Street between 3rd and 8th streets during a recent two-year period. Most of the victims were people walking and biking who were struck by automobiles.

Starting Aug. 11, we’re implementing major safety improvements on this stretch of San Francisco’s signature boulevard to help make our streets safer for everyone.

Thanks to our Safer Market Street project, there will be fewer turning vehicles and much-improved safety on the five-block stretch of Market from 3rd to 8th streets. Next Tuesday, drivers of private automobiles won’t be allowed to turn onto Market Street along much of this stretch, which is heavily used by people walking and biking. Instead, those driving private cars will proceed straight across Market.

That will remove the hazard posed by drivers trying to turn through pedestrian-filled crosswalks. It will improve safety for everyone and help prevent bottlenecks at intersections where vehicles are stuck behind a car waiting to turn through a crosswalk filled with people.

Safer Market Street is one of the 24 high-priority safety projects the city has promised to complete by February 2016 as part of Vision Zero, San Francisco’s commitment to end all traffic deaths by 2024.

Market Street is the city’s premier civic and commercial corridor, hosting hundreds of thousands of people a day arriving by transit, foot, bike or car.

It also has one of the highest rates of traffic collisions involving people walking and biking.

Considering the major role Market Street has in civic life, shouldn’t it be safer?

On June 16, our Board said “yes, it should” when they unanimously approved the Safer Market Street project.

Safer Market Street is a series of traffic engineering solutions designed to reduce conflicts and improve safety conditions for all users, including turn restrictions, the extension of existing transit-only lanes, and new loading and painted safety zones.

The advantage of these solutions is that they can quickly improve safety conditions without major construction. About a month after approval of the Safer Market Street project, paint crews had completed their work at the intersections of 8th, 5th and 3rd streets. On July 31, crews began painting the new transit only lanes on Market Street. Sign installation will begin this week.

The project is scheduled to wrap up in January with the completion of the transit-only lanes.

The turn restrictions will take effect Aug. 11. During the first week of implementation, parking control officers will be at every intersection between 3rd and 8th streets safely guiding motorists in accordance with the new turn restrictions. Please follow their directions as not doing so could get you a ticket. Muni, paratransit, commercial and emergency vehicles, as well as bicycles, are exempt from the restrictions. All vehicles will still be able to cross Market Street.

A map of the new turn restrictions is below:

The red arrows indicate the turn restrictions on Market Street that go into effect Tuesday, Aug. 11. (The purple arrow shows the existing required turn off of Market Street onto 6th Street. There's also one at 10th.)

Here’s an example from the 3rd and Market intersection of what the turn restriction street signs will look like as you approach Market Street: 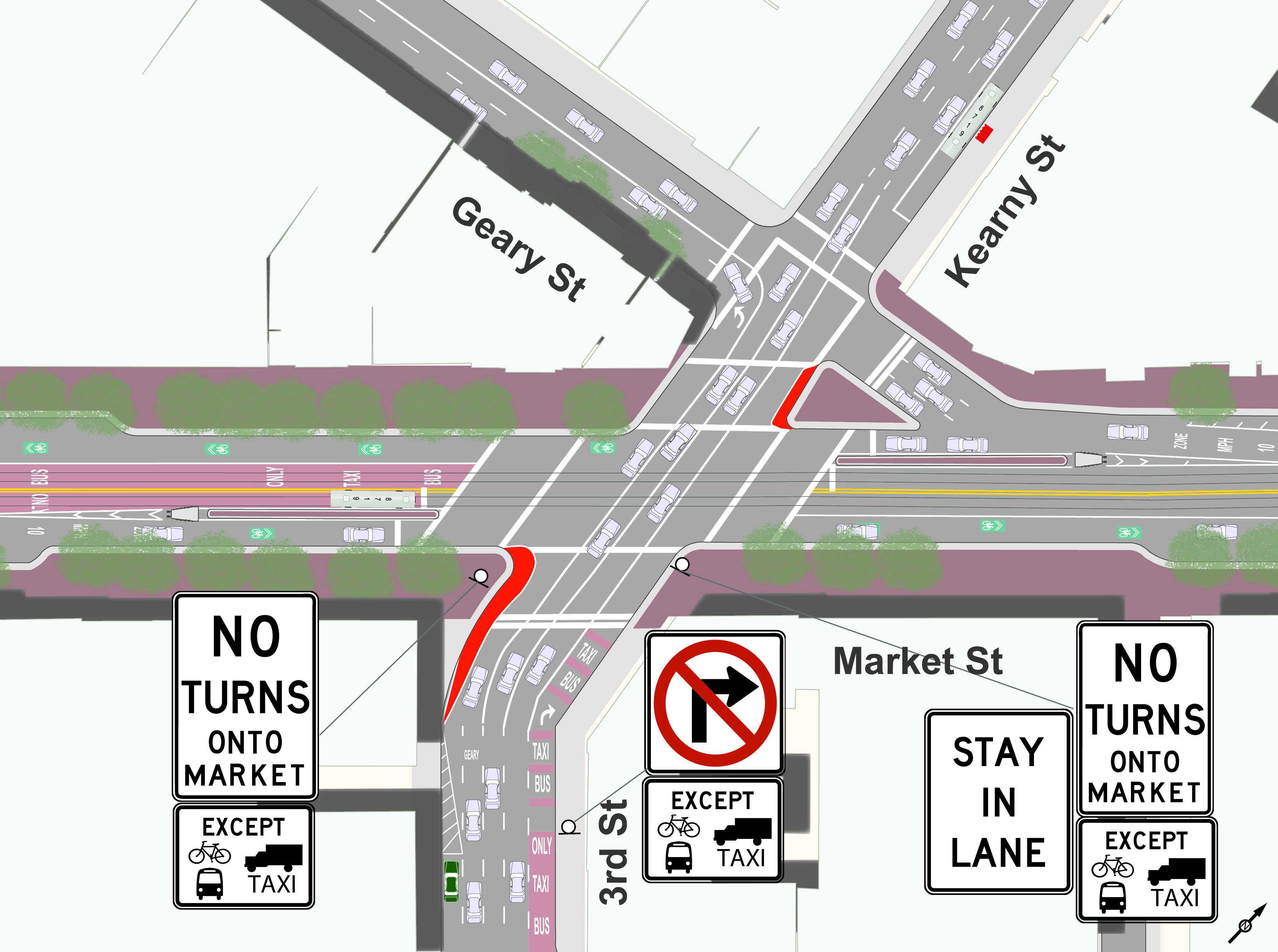