Of the thousands of negatives we have in our historic photo collections, night shots are among the rarest and every one is something special to look at. The long exposures necessary to make an image often create interesting scenes of darkened skies, blurred movements and sparkling streets lit up by artificial light sources.

Staying out late and hauling his massive 8x10" camera may not have been photographer George Fanning's idea of a night out on the town, but we're sure glad he made the effort to shoot this stunning photo! 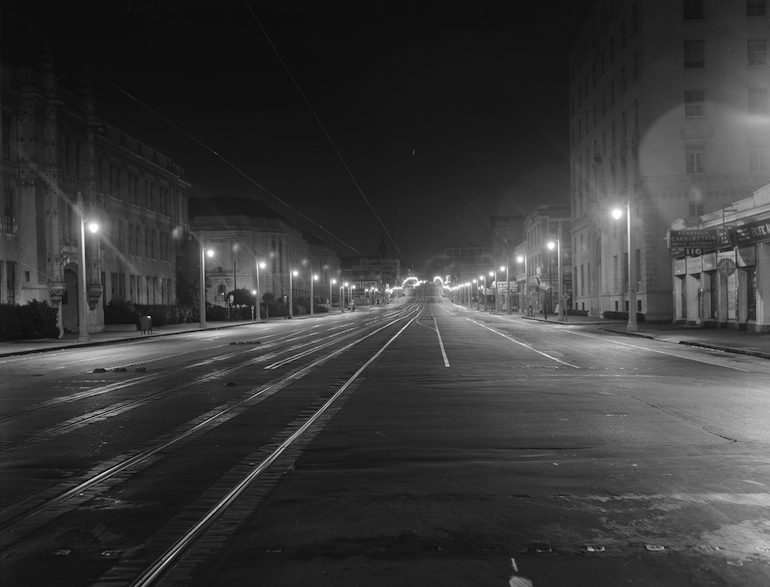 This shot was taken to show the street lighting on Van Ness, which bathed the great thoroughfare in a wash of electric illumination. Many of these ornate lampposts remain today, holding up overhead power lines for Muni and lighting the way along one of our busiest corridors.

Aside from some of the buildings seen at left and the light poles, this scene is a far cry from what one would see today. Not only is the street now divided with a tree-filled median and the tracks long gone, but it's probably safe to say that Van Ness is never this vacant, even at the latest (or earliest) hours of the night. It's remarkable that there are almost no vehicles or pedestrians in this shot, just a small streak of distant headlights in the far background and the wide, open street.

In the not too distant future, Van Ness may look slightly closer to this 1937 shot once the transit improvements of the Van Ness BRT Project are completed.  While the street will retain many of its modern-day features, the planned dedicated bus-only lanes will mimic the streetcar tracks of 1937 and improve the speed of transit on the corridor.