The streams of people riding on popular biking corridors like the Embarcadero and Fell, Oak and Valencia streets look larger as well.

Now we have the numbers to go with those observations. Biking in San Francisco is growing.

As part of an ongoing initiative to understand the role and growth of bicycling in the city, today we published our annual San Francisco Bicycle Count Report for the year 2015. 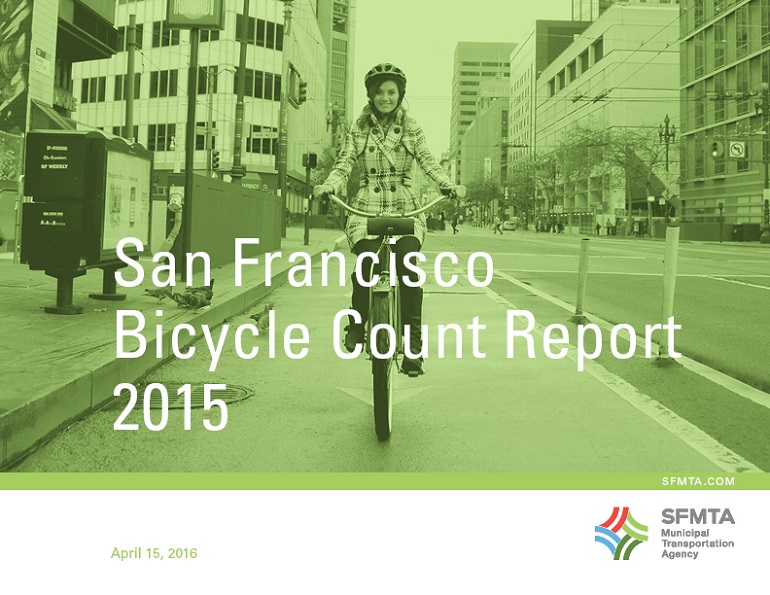 The annual bike count report has been produced by the SFMTA since 2006. It highlights where bike traffic is the highest, where there are opportunities for improvement, and how our programs and projects are affecting travel behavior.

You can read the report in detail online, but here are some of the key facts I took away this year:

Biking is San Francisco’s fastest growing means of transportation because the SFMTA is making it easier, safer and more convenient to get around town by bike. And it’s imperative that we continue to improve our streets for biking.

Today, San Francisco has 434 miles of bikeways, including:

San Francisco’s bike share system is also expanding, which will make biking more accessible and convenient for more of our city’s residents, workers and visitors. After a successful two-year pilot in San Francisco and the Peninsula, the Bay Area has committed to bike share as a new, affordable way to get around. Over the course of a two-year roll out in San Francisco, San Jose, and the East Bay, the Bay Area Bike Share system will grow from 700 bikes to 7,000 bikes, with 4,500 bikes coming to San Francisco. We’ll have one of the largest and densest bike-share systems in North America!

With more people, housing and jobs coming to San Francisco, we need more sustainable ways to get around town. We’ll have gridlock if everyone arrives with a car. Increasing bicycle ridership not only eases congestion on our streets, it also ties into our city’s Climate Action Strategy to reduce greenhouse gas emissions. After all, bikes are the original zero-emission vehicle, and they’re a pretty darn fun way to get around.

In everyday terms, each person on a bike is one less person in your traffic jam or fighting for a parking spot.

I think we can all agree that’s a pedal in the right direction.

Tom Maguire is the director of the SFMTA's Sustainable Streets Division. He joined the agency in 2014 after serving as Assistant Commissioner at the New York City Department of Transportation, where he oversaw New York’s Bus Rapid Transit, Freight Mobility, Peak Rate Parking (PARK Smart), and Alternative Fuels programs, and directed the effort to implement congestion pricing in Manhattan in 2007-2008.  Tom has also worked in the private sector at the engineering and design firm Arup. He holds a Master’s degree in City and Regional Planning from UC Berkeley and a B.A. from Rutgers.