Northbound Valencia, from Duncan to Cesar Chavez Street. Note: Only khaki-colored paint will be added to the “load” area. Green and yellow paint will not be added.

While it will be finished in November, you can ride the bike lane now in its interim state (the final design will be a bit different). During construction, everyone on the street should keep in mind to use extra caution and expect that the bike lane may be closed for work for a couple of days.

But first, we’ll explain a bit about what a raised, parking-protected bike lane is - and what makes this short stretch a “first” in the city.

This bike lane combines two main physical design features aimed at making streets safer and more comfortable for people to bike on. They help provide a clearer sense of separation between people walking, biking or driving and organize the street into a more predictable pattern.

Raised bike lanes are a relatively new but simple idea - they’re raised up from the roadway by a curb. This is the second one to be built after the demonstration installed on Market Street near Valencia’s north end this year, with which we’re evaluating different types of designs.

San Francisco also has a few parking-protected bike lanes in Golden Gate Park and on sections of 13th Street, Bay Street in the Marina and the southern end of Polk Street near Market. With this design, the bike lane runs curbside, and the parking lane is placed between the bike lane and the traffic lane. 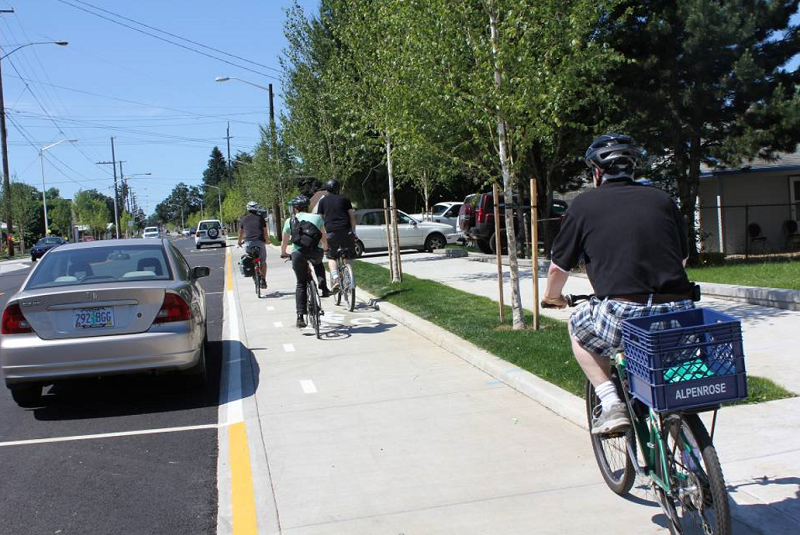 This raised, parking-protected bike lane in Portland, Oregon is similar to the one coming to Valencia. Photo via Portland State University.

These types of street design features are becoming increasingly common in San Francisco and other American cities like Portland, Oregon (pictured above). And San Francisco will start to see more as we build out a new generation of bikeways geared towards being friendly enough for anyone to use, whether you’re eight years old or 80.

The bike lane we’re building now is the city’s first to combine both of these features. Located on Valencia, it runs from the intersection with Duncan Street and Tiffany Avenue to Cesar Chavez Street.

In the interim construction period, the bike lane is 11 feet wide, and the adjacent lane is designated for vehicle traffic. Under the final configuration starting next month, the bike lane will be six feet wide and a buffer area (five feet wide) will be placed between the bike lane and parking lane for people to load and cross the bike lane. The existing parking meters will remain on the sidewalk.

This new bike lane is part of the Mission Valencia Green Gateway Project, an effort led by the SF Public Utilities Commission that will also bring a new plaza, greenery and stormwater collection features on Valencia near Mission Street. The entire project is expected to finish in January.