Skip to main content
ATTN: The OB 91 Owl will reroute around @UnionSquareSF until further notice. OB 91 Reroute: Via Sutter to Mason to https://t.co/d8Kie32yhl (More: 10 in last 24 hours)
Subscribe

Streets for All: Reimagining Van Ness

Our 2016-2017 Annual Report, Streets for All, highlights our collection of recent achievements and goals. The stories captured in the Fiscal Year 2016-2017 SFMTA Annual Report demonstrate the role transportation plays in living out those values—chief among them the city’s Transit First Policy. Throughout the year, we will be featuring excerpts from Streets for All on Moving SF to give our readers better insight on what we have achieved thus far, and what we look forward to bringing to the people of San Francisco.

Reimagining Van Ness (page 12 of Streets For All)

In its prime, Van Ness was a grand avenue, and the backbone of San Francisco. Parades were held here and rebuilding efforts launched Van Ness after the 1906 earthquake. Now a different sort of rebuilding is in the works to restore Van Ness Avenue to its former glory–and propel it into the future. The Van Ness Improvement Project will create state-of-the-art transit, increase pedestrian safety and beautify the landscape along a 2-mile corridor of Van Ness Avenue between Mission and Lombard streets. Specific improvements will include: 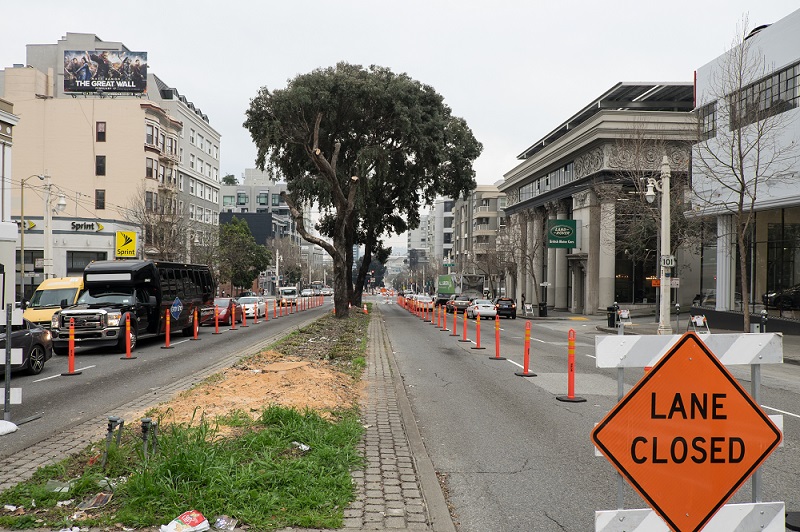 We have a variety of video resources on our Youtube page, including renderings of the project upon completion. We also have highlights from the groundbreaking press conference:

Make sure to check out the Protect Status for the Van Ness Improvement Project on our website: www.sfmta.com/projects/-van-ness-improvement-project