Summertime in the City

After the handful of hot summer days we've experience the past week or so, it seems appropriate to bring out a little piece of summer fun from long ago. Nothing says "summertime" like a trip to the ocean to soak up some sun and enjoy the surf. This shot from around 1898 shows a car full of San Franciscans doing just that. 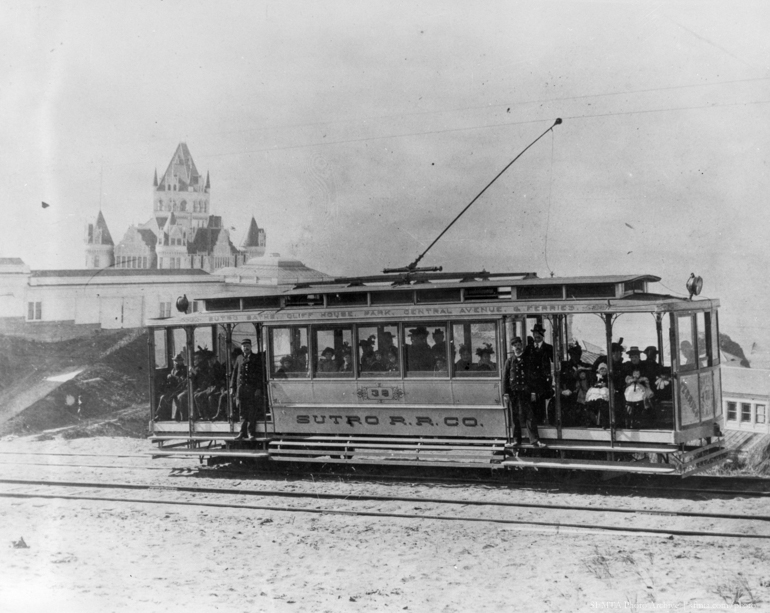 Sutro Railroad Co. Car 38 Above Sutro Baths with Cliff House in Background | Circa 1898

Here we see Sutro Railroad Company Car #38 chocked full of passengers riding along the cliff above Sutro Bathhouse and the "Gingerbread" Cliff House.  Adolph Sutro, millionaire philanthropist and Mayor of our fine city from 1895-97, developed much of the Land's End area with attractions to draw city dwellers of all incomes out to what was then almost completely undeveloped natural land. In addition to the spectacular Victorian-style cliff house (which burned in 1907) and Sutro Baths, the gardens surrounding his residence at the top of the hill were also open to the public at low to no cost.

To get people out to Land's End to enjoy the ocean and get a break from the bustle of the city, he built an electric railway to directly compete with the preexisting Ferries and Cliff steam line, which was then owned by the Market Street Railway Company and charged double what Sutro thought appropriate for citizens to pay. A more scenic, cleaner and cheaper route than the steam train, Sutro's Railroad was a success, as can be seen by this car full of what appear to be mostly women and children, out for a day's excursion to the oceanfront attractions.

While the days of the Victorian Cliff House, expansive baths and Sutro's elaborately gardened estate on Sutro Heights are long gone, Sutro's dream to provide the public with low cost access to one of our city's most beautiful areas lives on. Today, Sutro Heights, Bathhouse ruins and the Cliff House are part of the Golden Gate National Recreation Area and all are open to the public at no cost (save the meals at the Cliff House restaurants). To get there, Muni's 38 Geary and 38R Geary Rapid drop visitors off at the entrance of Sutro Height Park for a mere $2.25, more than Sutro's 5-cent fare but far cheaper than many other transportation options.

So next time the suns burns through the fog and the temps climb into the upper 70s and 80s, take a trip back in time and ride on out to Land's End for a sunny summer excursion Sutro Style.