Then and Now: Keeping the Cable Cars on the Move

When Andrew Hallidie’s first cable car climbed Nob Hill on Clay Street in August 1873, the cars were a brand-new technology to replace the horse-drawn streetcars used at the time. Little did he know that 148 years later, cable cars would still be scaling the steep slopes of Nob Hill.

Many of the methods used to maintain and operate the cars to this day harken back to the golden era of cable cars in the late 1800s. As we ramp up for the return of revenue service on San Francisco’s beloved cable cars, check out the images below for a look at just some of the behind-the-scenes work keeping the system running, both then and now.

Keeping up the Cars
Maintaining the cars on a regular basis is vital to keeping them safe, operable and looking good for the tens of thousands of people who ride them. At the Cable Car Division shops, mechanics, carpenters and painters perform routine maintenance, make repairs and brighten up worn out paint to keep the cars in shape. 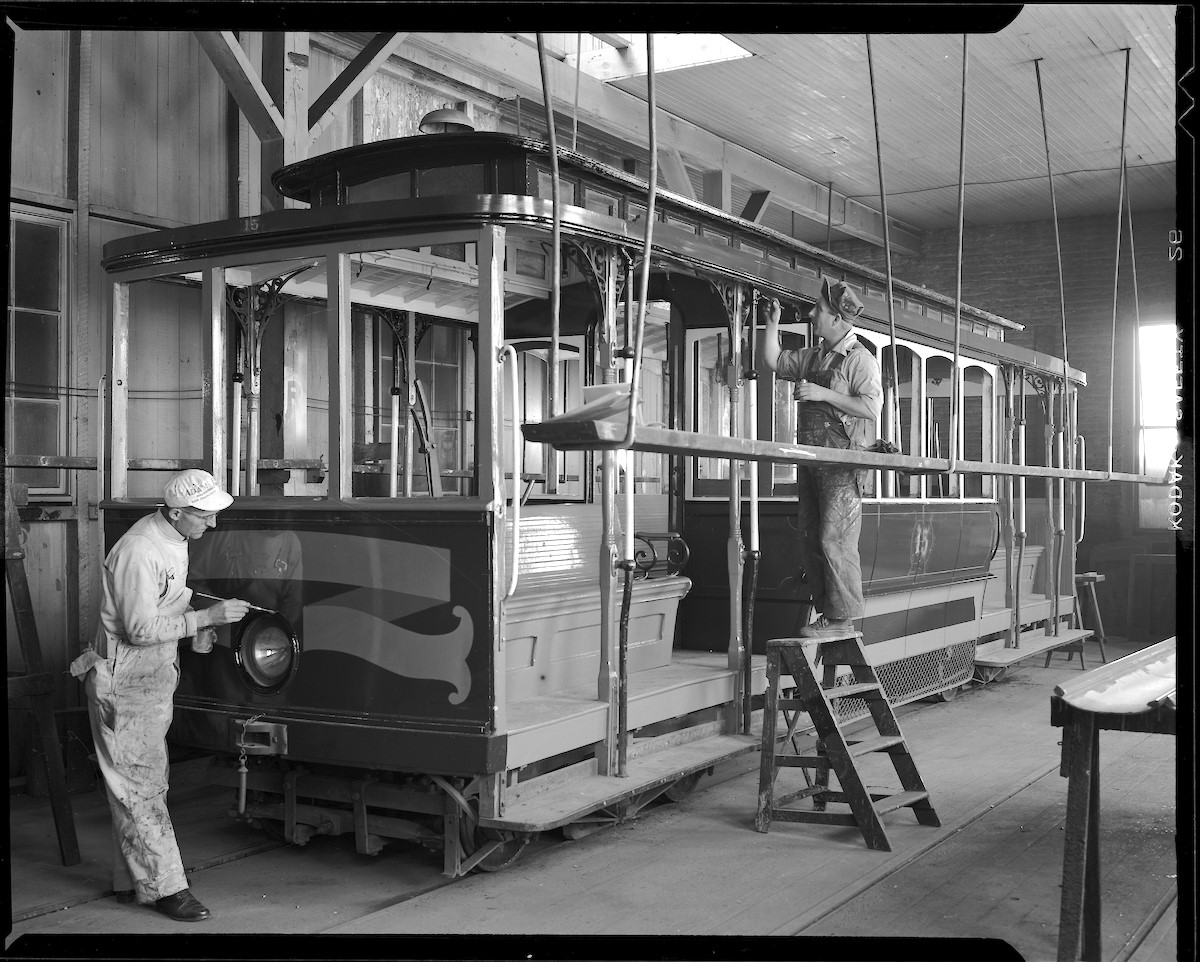 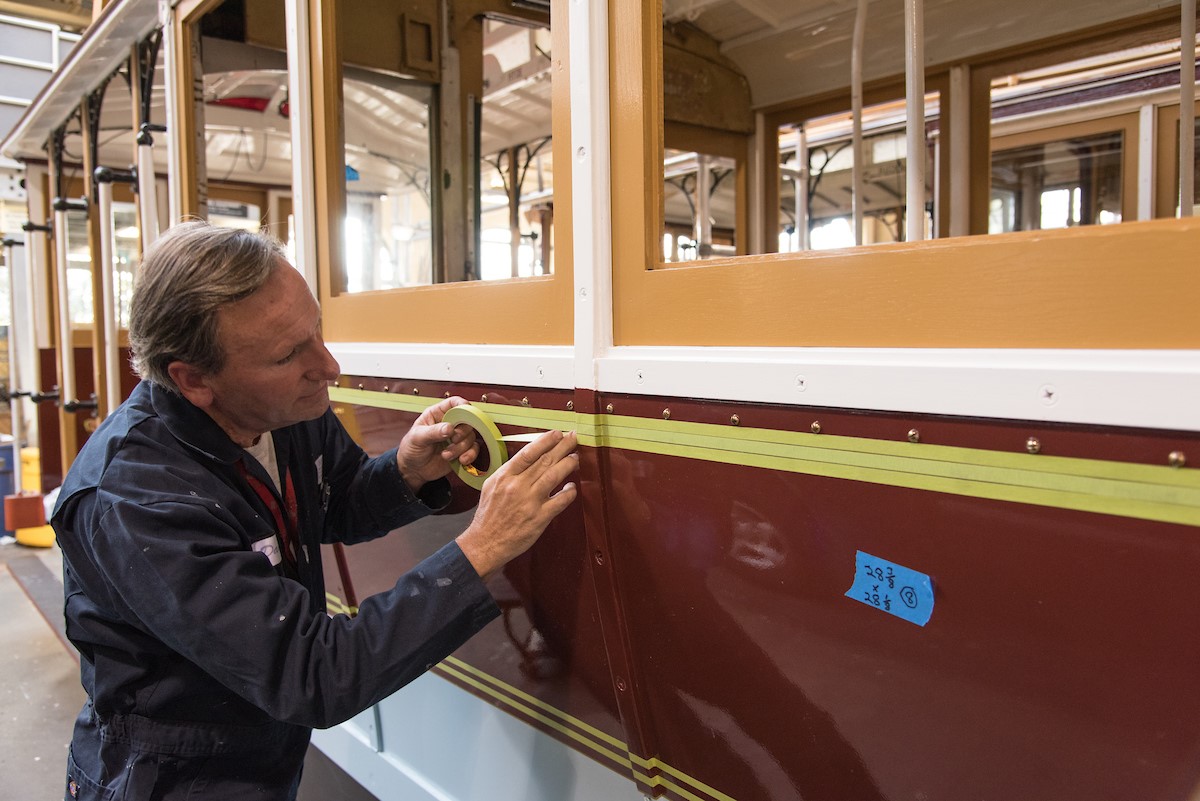 Now: A painter lays down masking tape to paint striping on the side of Powell St. Cable Car 22, which was rebuilt in 2017.

Minding the Cable
Without cables and the machinery used to move them, there would be no cable cars. Today the age-old work of cable splicing, a method of attaching one end of the cable to the other, is done by hand, the same as it has been done for over 100 years. Another critical job is maintaining the winding machinery used to move the cable and cars through the streets. 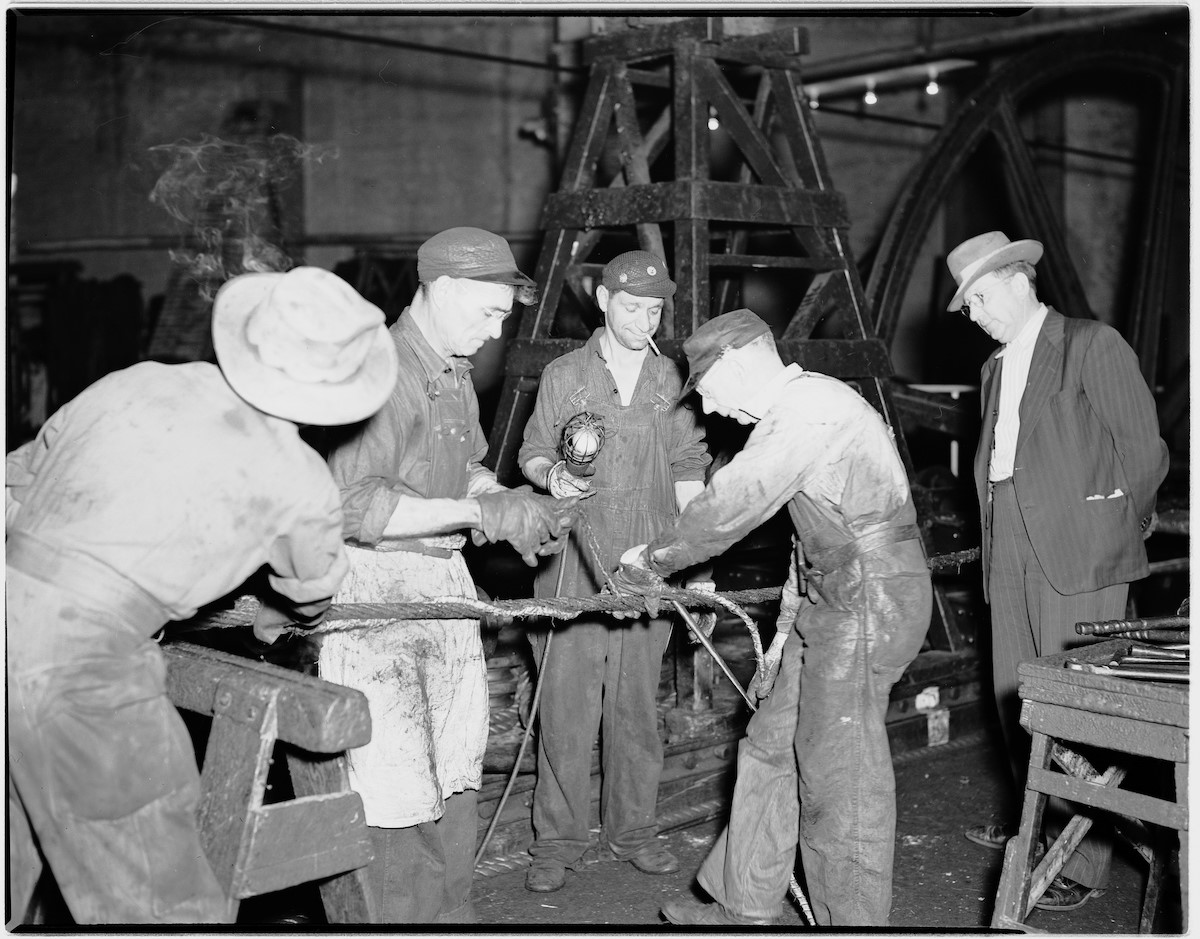 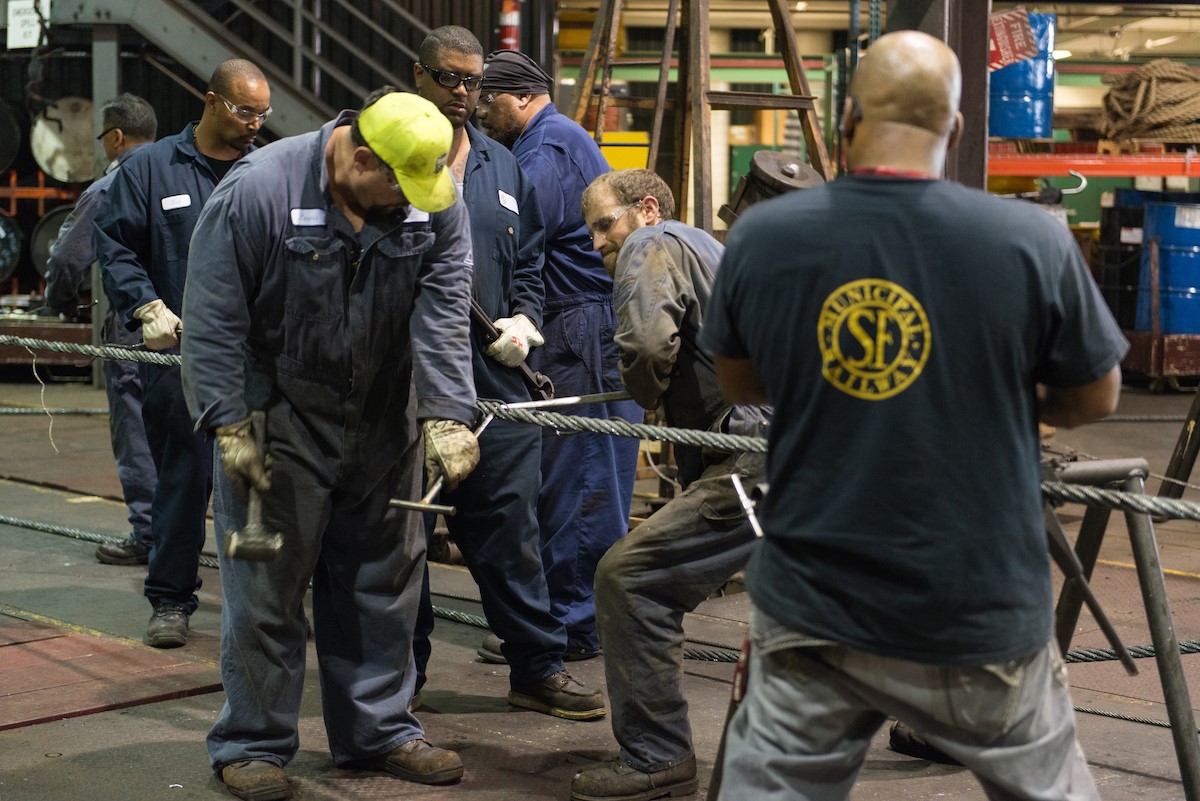 Now: This 2014 shot looks about the same as its 1947 counterpart, minus the hats and cigarettes!

Major Overhauls
When a car is too old or damaged to operate safely, it is rebuilt by teams of skilled craftspeople. The metalworkers in our Special Machine shop are responsible for building new metal parts used throughout the vehicle – from heavy wheel and suspension assemblies to decorative parts of the passenger grab bars. Carpenters rebuild the entire car, while painters and mechanics finish getting the car looking its best and ready to roll. 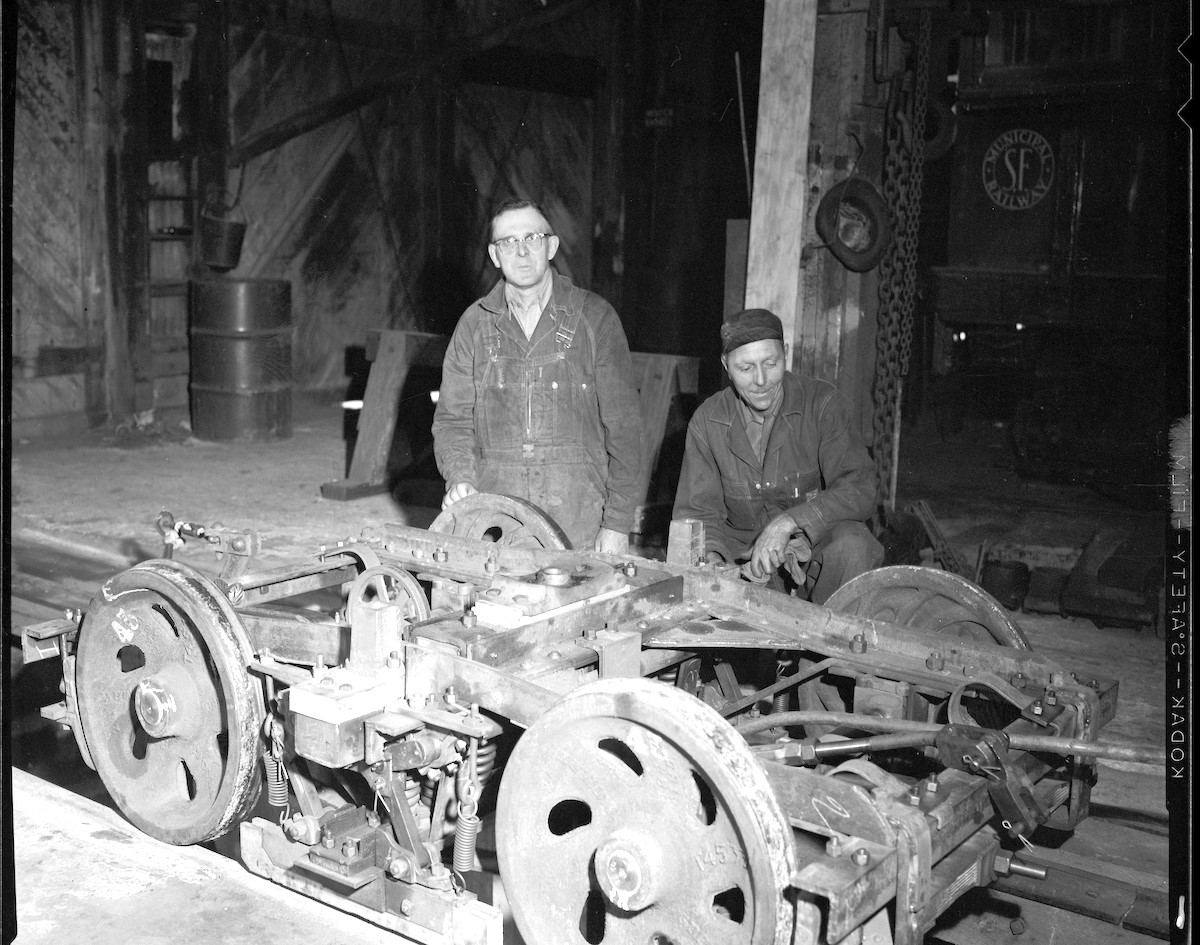 Then: Two mechanics stop for a photo in 1958 with an overhauled cable car truck in the heavy repair shops once located on Ocean and San Jose avenues (present day location of Muni’s Green Division). 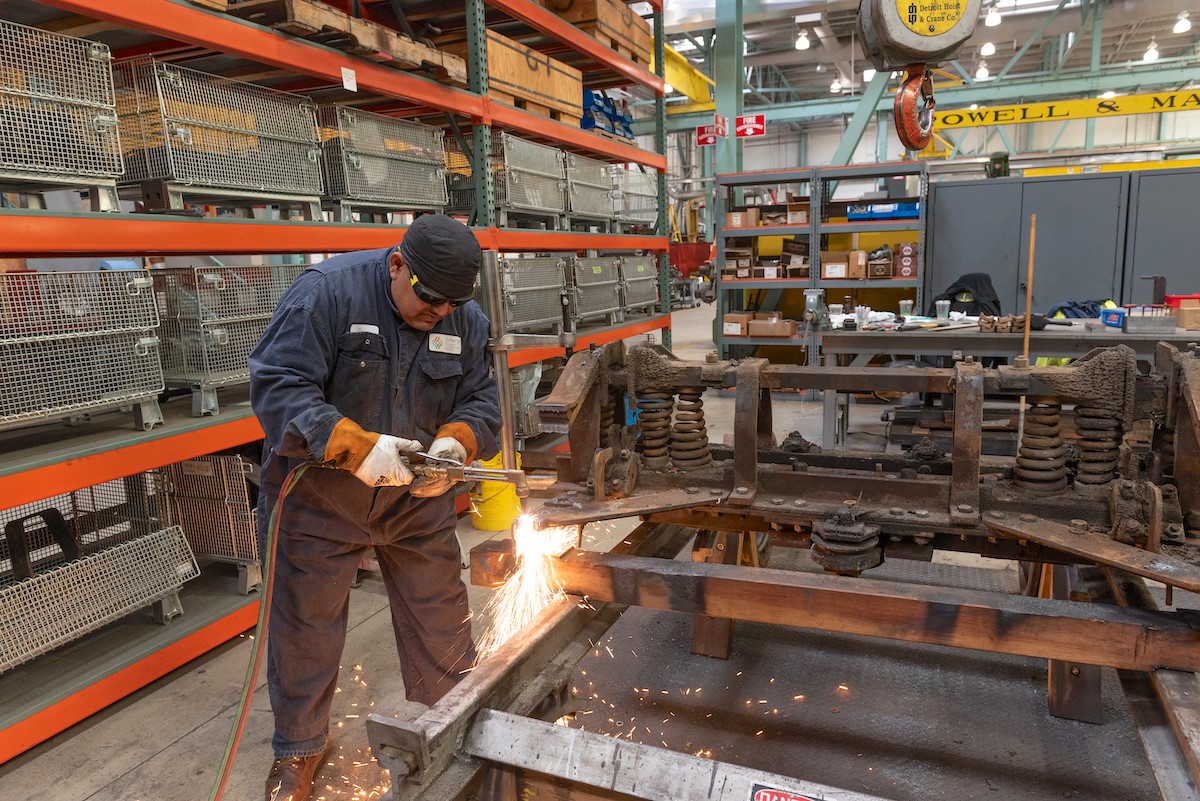 Now: A welder cuts up an old cable car truck using a torch at the Special Machine Shop, which handles building brand new trucks from scratch. In addition to using traditional methods, the shop is truly a 21st century operation with computer-controlled machines that can make parts from technical drawings that were painstakingly uploaded into modern machining software.

Tracks to Run On
Today, as throughout the past 100+ years, track crews are responsible for keeping the track system up and running. Unlike regular rails used in our streetcar and subway systems, the cable car rails include complex pieces to not only guide the cars but also move the cable up and over hills and around bends. 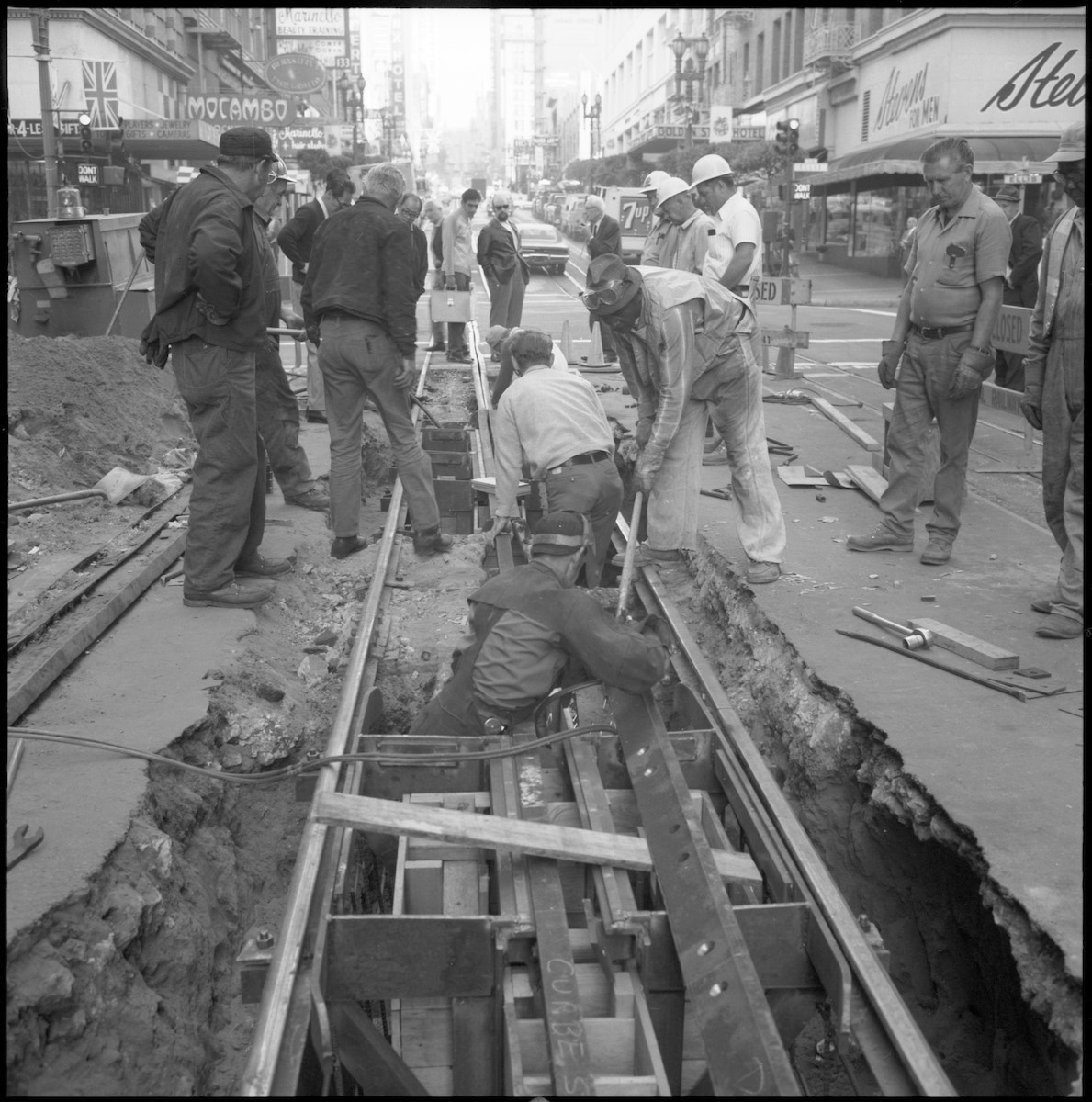 Then: A track crew works to replace a depression beam and bumper bar on Powell Street in this 1971 photo. 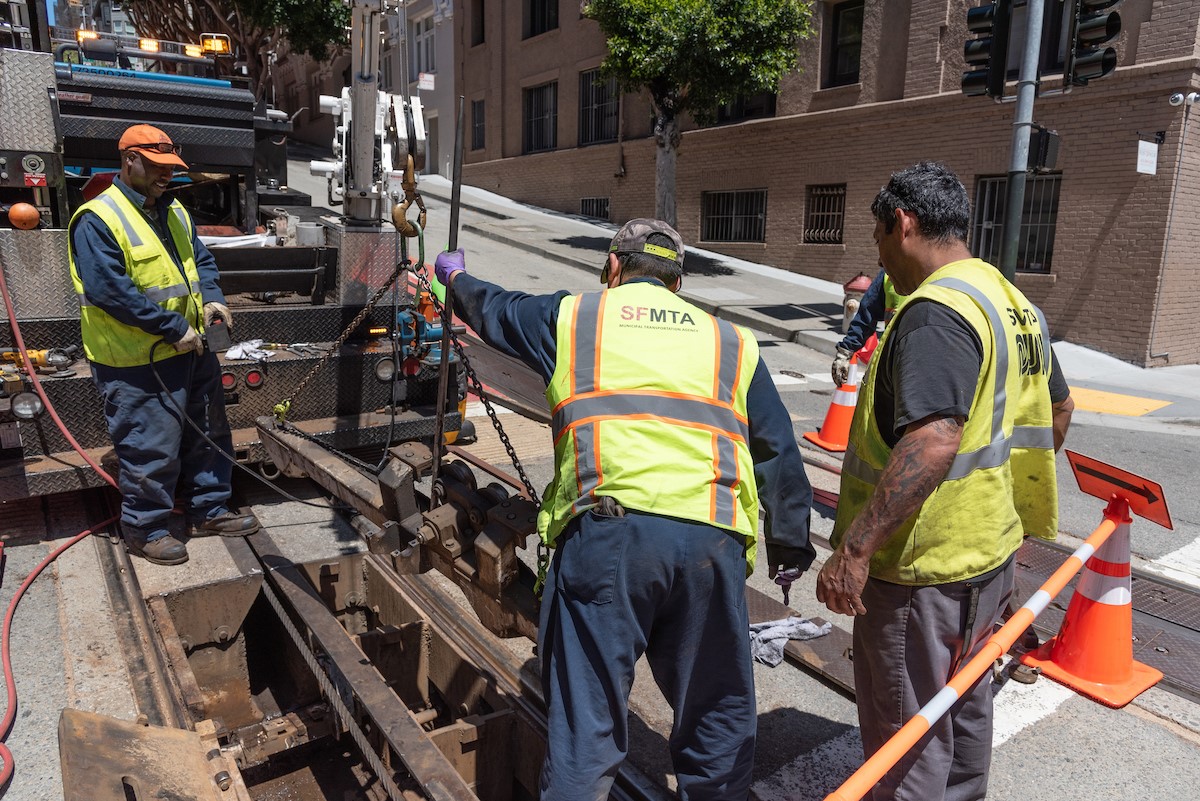 Now: In this 2019 shot, a track crew replaces an old depression beam just blocks from the 1971 photo. Depression beams are used to push against the cable to keep it from hitting the channel in which it runs wherever the road dips.

The maintenance and restoration efforts of SFMTA's cable car barn staff speak to their unparalleled background skills and their mastery of age-old trades that help keep our very own national landmark on the move.

Catch a ride on the cable cars for free throughout the month of August and look for them to return to revenue service in September.