In Los Angeles this week, public transportation professionals form all over the country have gathered for the annual meeting of the American Public Transportation Association. As part of the conference, APTA announced that one of their most noteworthy honors — Outstanding Public Transportation Board Member Award — was bestowed upon our own Tom Nolan, who has been the chairman of the SFMTA Board of Directors for 10 years. The full text of our press release is below.

Nolan's most public component of his role as Chairman is leading the bi-monthly SFMTA Board meetings. He is quick to offer support of employees, especially those who work directly with customers, and he's pushed the agency to do more to provide more equitable service to San Francisco. We could not be prouder. 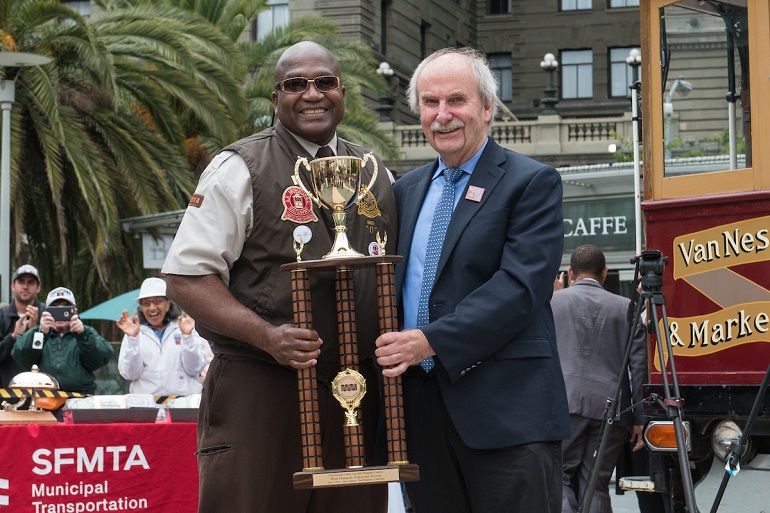 The San Francisco Municipal Transportation Agency (SFMTA) is pleased to announce today that Tom Nolan, the agency’s board chairman, was named this year’s recipient of the prestigious American Public Transit Association (APTA) Outstanding Public Transportation Board Member Award, which is the highest honor awarded to a transit board member in North America. It is presented annually to the board member who is judged to have made the greatest contribution to their local transit system and the industry in general.

“Over his decades of service, Tom Nolan’s stamp of leadership has been imprinted on almost every single transit project in San Francisco and the Bay Area,” said Congresswoman Nancy Pelosi. “His public service has ensured that all people and communities can safely, efficiently and affordably be transported from work, school and home.”

Chairman Tom Nolan joined the SFMTA Board of Directors in 2006. He also currently serves as the SFMTA’s representative on the Caltrain Joint Powers Board. Under Nolan’s leadership as a board member, the agency’s numerous accomplishments included:

“Near the conclusion of my over 30-year tenure as a board member/commissioner on four different transportation agencies in the SF Bay Area, I am truly thrilled to receive this award from my national colleagues at APTA,” said Nolan. “I am proud of my service in this most important aspect of our common life, and the award will always be a treasured capstone of that time for me.”

Nolan served two full terms as a member of the San Mateo County Board of Supervisors and is a former member of the Metropolitan Transportation Commission, and the SamTrans Board prior to joining SFMTA. Shirley Harris, public board member of SamTrans, was also named APTA’s Outstanding Public Transportation Board Member.