A Public Hearing for the below proposed changes on segments of the 19 Polk and 27 Bryant corridor and additional transportation code amendments for segments of Folsom, Powell, Sansome, and Judah Streets will be held online on Tuesday, January 18, 2022 at 1 p.m. as a part of the SFMTA Board of Directors' regular meeting.

If you would like to comment on this proposed change, you may attend the SFMTA Public Hearing:

If you plan to provide public comment, for the best experience join the online session and use your telephone for audio by using the phone number above. When prompted online, select “Don’t join audio.” When public comment is open press “1” and then “0” on your phone to join the queue of people who would like to speak.

You can also file your comments in writing or by phone before the hearing by 5 p.m. on Monday, January 17:

All comments will be reviewed by project staff and will be entered into the public record. Comments will be considered by the SFMTA Board before a decision is made.

The proposed modifications would make the existing temporary bus and taxi only lane and right turn requirement installed beginning in October 2020 permanent. These modifications are proposed under the authority granted to the SFMTA under California Vehicle Code Section 21655.1 (designation of lanes for use by public transit buses) and Section 21655.5 (designation of lanes for exclusive or preferential use by high occupancy vehicles).  In addition, the Transportation Code must be amended to make the temporary transit-only lanes permanent.

A.   ESTABLISH - BUS AND TAXI ONLY LANE - Folsom Street, eastbound, between 10th and Mabini streets. (This transit-only area restriction was approved by the SFMTA Board of Directors on June 18, 2019 by Resolution 190618-075.)

In order to ensure that the Transportation Code accurately reflects approved transit-only lane changes, SFMTA staff recommend that the SFMTA Board also approve these amendments to the Transportation Code.  The above modifications are proposed under the authority granted to the SFMTA under California Vehicle Code Section 21655.1 (designation of lanes for use by public transit buses) and Section 21655.5 (designation of lanes for exclusive or preferential use by high occupancy vehicles).

The proposed action is the Approval Action as defined by Chapter 31 of the San Francisco Administrative Code. The Planning Department has issued a CEQA exemption determination, which may be viewed online at the Planning Department's website. Following approval of the item by the SFMTA Board, the CEQA determination is subject to appeal within the time frame specified in S.F. Administrative Code Section 31.16 which is typically within 30 calendar days. For information on filing a CEQA appeal, contact the Clerk of the Board of Supervisors at City Hall, 1 Dr. Carlton B. Goodlett Place, Room 244, San Francisco, CA 94102, or call (415) 554-5184. Under CEQA, in a later court challenge, a litigant may be limited to raising only those issues previously raised at a hearing on the project or submitted in writing to the City prior to or at such hearing, or as part of the appeal hearing process on the CEQA decision. 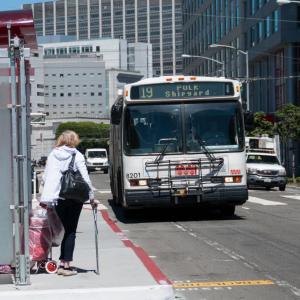