San Francisco Unveils One of a Kind Mural in Asphalt 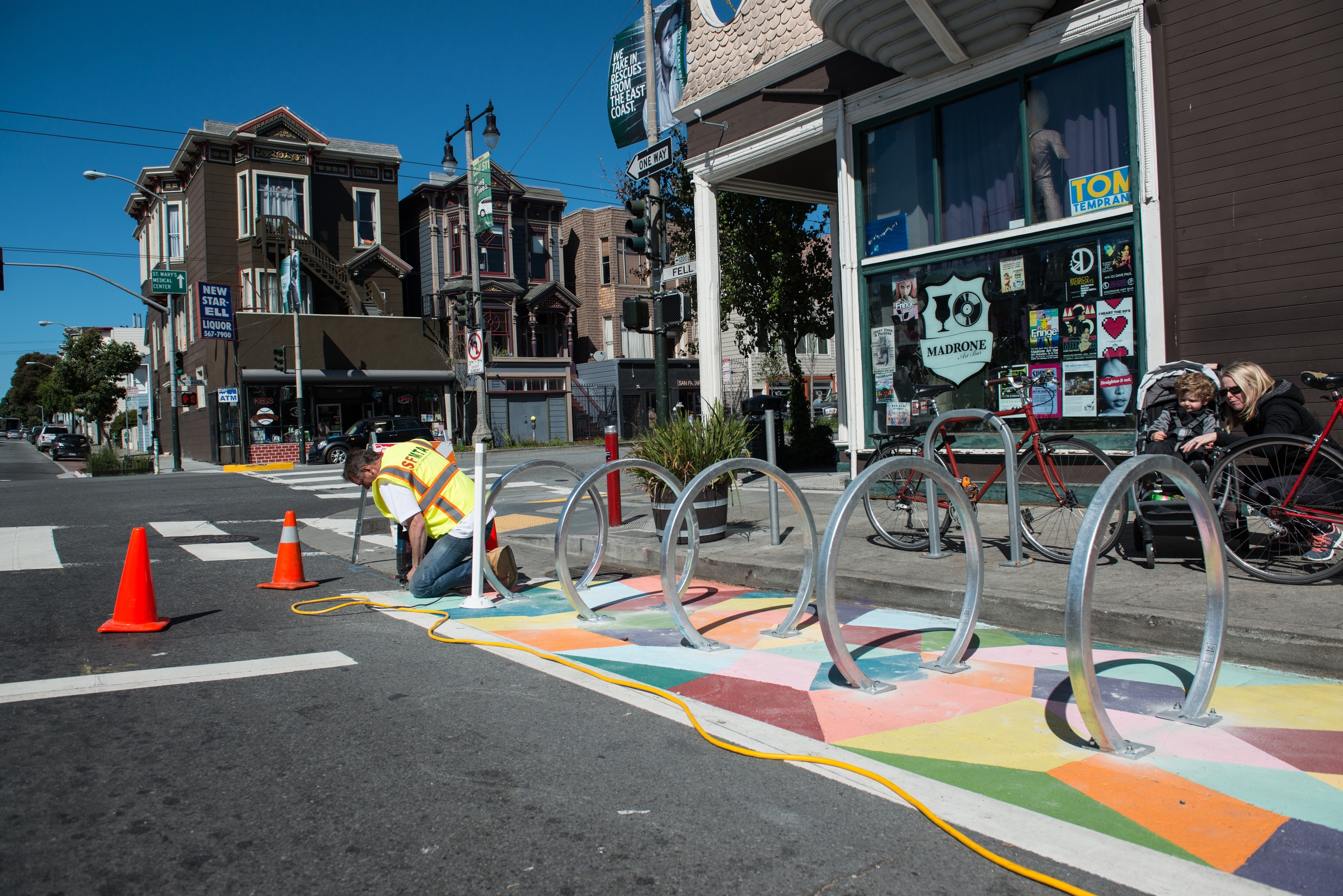 In support of local business and local art, the San Francisco Municipal Transportation Agency today announced the completion of the city’s first on-street mural. A privately-funded mural at the corner of Fell and Divisadero streets was made possible by repurposing a single vehicle parking space into a functional art piece. Now, up to 12 bikes can be parked on six racks installed on top of the mural.

“City initiatives like these bring out the creative side of our communities,” said London Breed, President of the Board of Supervisors, and District 5 Supervisor. “I’m excited to see a District 5 business like Madrone Art Bar using public space to promote both local art and sustainable transportation. I hope other businesses in the city will consider doing the same.”

The idea for the mural stemmed from SFMTA staff after receiving a request for an on-street bicycle parking space outside of Madrone Art Bar at 1190 Fell Street. Also known as a “bike corral,” the SFMTA works with requesting businesses and property owners to install corrals when sidewalk bike racks are filled to capacity. 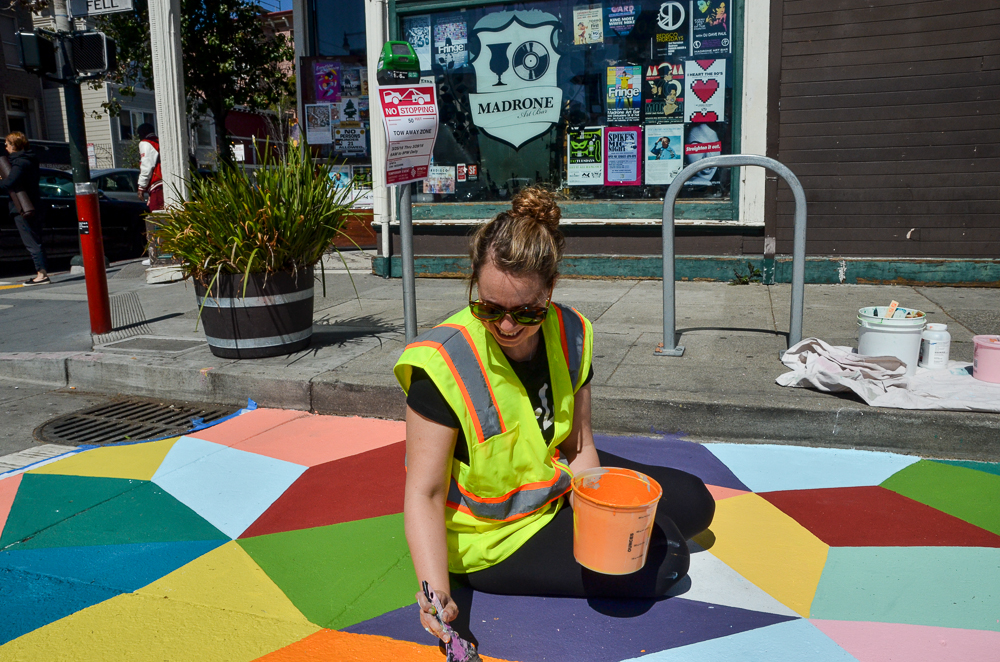 With the goal of supporting local business and art, as well as encouraging more people to get around by bike, the SFMTA proposed the idea of painting a mural in the requested corral fronting the art bar. Owner Michael Krouse not only supported the idea, he funded the mural and commissioned local artist, Kristin Farr, whose colorful, painted geometric designs have been painted on many different surfaces in thematically selected palettes, using contrasting colors to create structure and dimension. Farr’s recognizable work can be found in public spaces throughout San Francisco and worldwide.

“We are proud to launch this unique initiative with the SFMTA,” said Madrone Art Bar owner, Michael Krouse. “Having the city’s first on-street mural outside our art bar in a bike corral isn’t just fitting; it highlights the nexus between local business, art and transportation.” 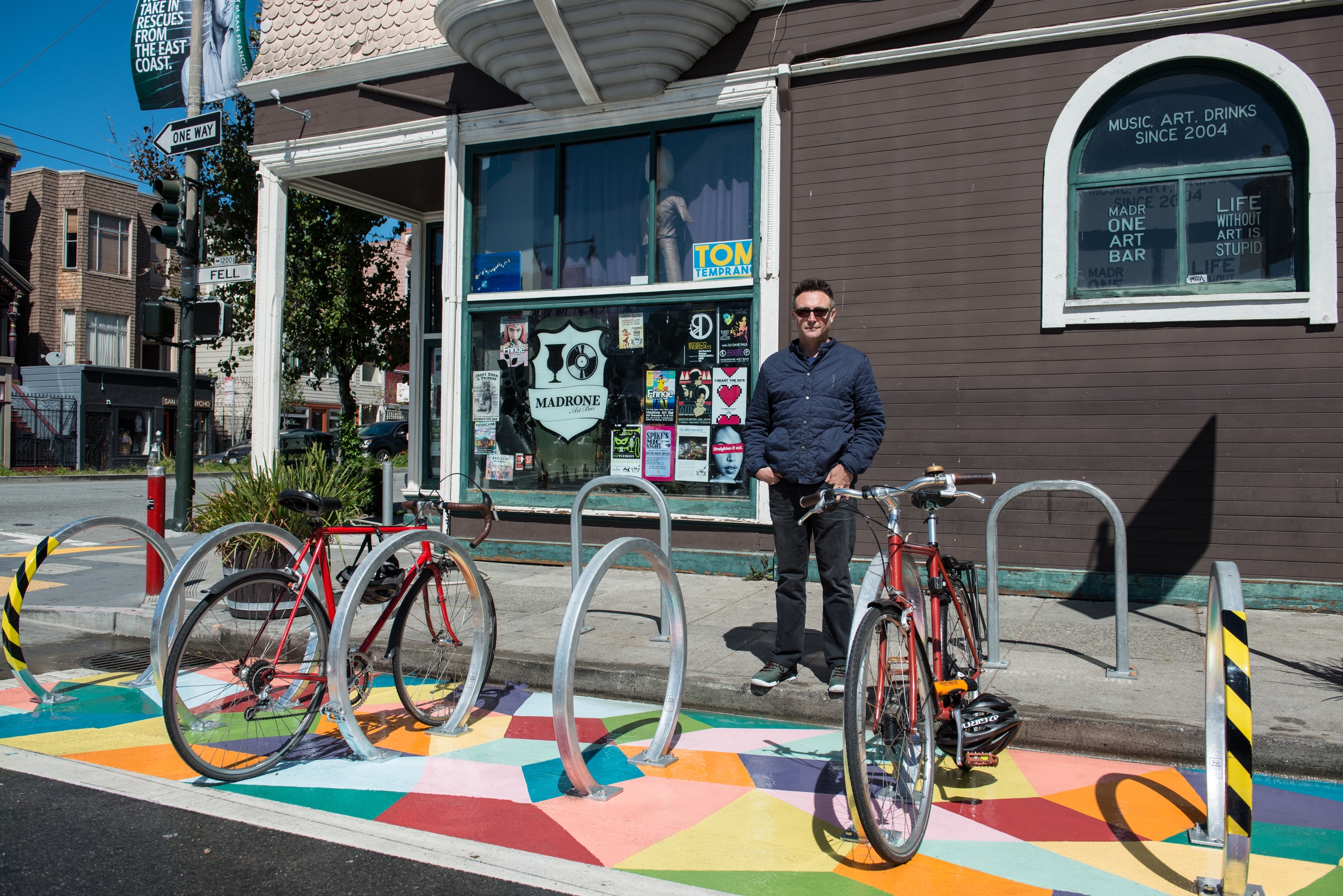 “Streets, buses and parking facilities don’t just help people get where they need to go; they can also be canvases for our vibrant communities,” said Ed Reiskin, SFMTA Director of Transportation. “We wanted to demonstrate how a simple bike parking space could be more than just that with creativity and the support of local business. While this was our first pilot, we’re eager to work with all those interested in marrying bike parking and public art near their front doors.”

This initiative was the SFMTA’s first as part of the agency’s ongoing bicycle parking program. To date, the agency has implemented almost 4,000 sidewalk racks and nearly 70 on-street bike corrals throughout the city. Moving forward, parties interested in installing and commissioning a bike corral and mural can work with the SFMTA and get more information at: https://www.sfmta.com/services/streets-sidewalks/installation-requests/bicycle-racks-corrals.

May
24
CANCELLED - Policy and Governance Committee meeting, May 24, 2022 The SFMTA Policy and Governance Committee meeting scheduled for Tuesday, May 24, 2022, has...
May
25
San Francisco County Transportation Authority Special Citizens Advisory Committee SFCTA Community Advisory Committee May 25, 2022 at 06:00 PM Agenda item 8:...
May
26
ISCOTT Meeting 1524, May 26, 2022 The Interdepartmental Staff Committee on Traffic and Transportation (ISCOTT) hearing on Thursday,...