The San Francisco Municipal Transportation Agency (SFMTA), which manages all transportation in the city, including the Municipal Railway (Muni), continues its Muni Forward efforts by creating a more direct transit route for 10 Townsend and 12 Folsom/Pacific riders. The more direct routes will save riders up to three minutes headed towards Market Street making their Muni ride faster and more reliable.

In order to implement the improvements, Sansome Street’s existing southbound lane has been extended three blocks, which required one of the northbound traffic lanes to be converted to a southbound lane between Washington Street to Broadway. This lane will provide access to transit and commercial vehicles between the hours of 6 a.m. and 8 p.m.

The previous alignment on this corridor had an indirect route that prolonged trips during heavy congestion.

“This Muni Forward initiative means faster, simpler, and more reliable service for riders travelling to and from the heart of the city’s Financial District,” said SFMTA Board Chairman, Tom Nolan.

These improvements will be implemented on Saturday, August 13.

“This Muni Forward infrastructure improvement was funded by Prop A, which was passed by San Francisco voters in 2014. We have listened to our riders and look forward to reducing travel times and increasing reliability in a rapidly growing city,” said SFMTA Director of Transportation, Ed Reiskin.

The traffic configuration and rules on this stretch of Sansome remain the same as those already in place (south of Washington). Between the hours of 6 a.m. to 8 p.m. daily, the southbound lane will be restricted to buses, taxis, commercial vehicles, and emergency vehicles. All other vehicles will be allowed outside of these hours.

New stops will be added at Broadway at Sansome Street and Sansome at Jackson streets to accommodate the new, more direct route.

The outbound 10 Townsend and 12 Folsom/Pacific routes will no longer run southbound on Battery between Broadway and Washington streets to provide a more direct connection for this transit corridor.

The outbound 10 and 12 routes will no longer serve the following stops: 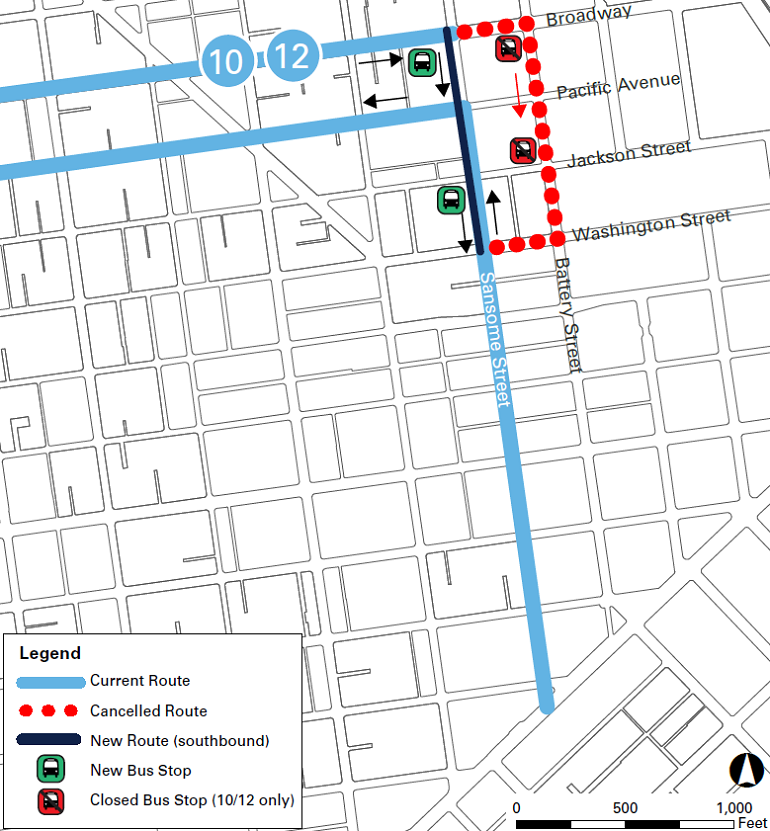 Muni’s 10 Townsend and 12 Folsom/Pacific routes will be re-aligned to use the new southbound lane on Sansome.

More information about Muni Forward and Transit Priority Projects can be found at www.sfmta.com/muniforward.