On January 18, 2022, the SFMTA Board of Directors unanimously approved making 1 California Temporary Emergency Transit Lanes permanent, with the exception of Clay Street between Stockton and Grant, which will remain as a temporary transit lane while we continue to evaluate and collect community feedback.

During and prior to the January 18 public hearing, we heard 47 public comments about whether to make the project permanent via email or phone. Of those comments, 35 were positive about maintaining the transit lanes, 7 were neutral, and 5 were unsupportive. Some common themes we heard were:

Next steps: Implementing the recommended changes to the project

Two of the staff-recommended changes to the project are planned to be implemented in early February. This includes:

These changes will expand parking availability in the afternoon peak for three hours on three blocks of Sacramento, and for two hours on one block of Clay.

The remaining project revisions in response to evaluation will be implemented later in 2022.

Jan
18
Board of Directors meeting, January 18, 2022 Due to the COVID-19 health emergency and to protect our Board Members, SFMTA staff, and members of... 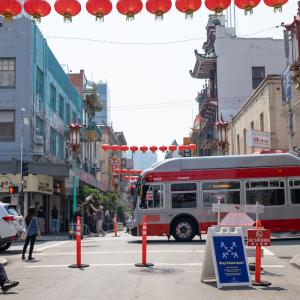