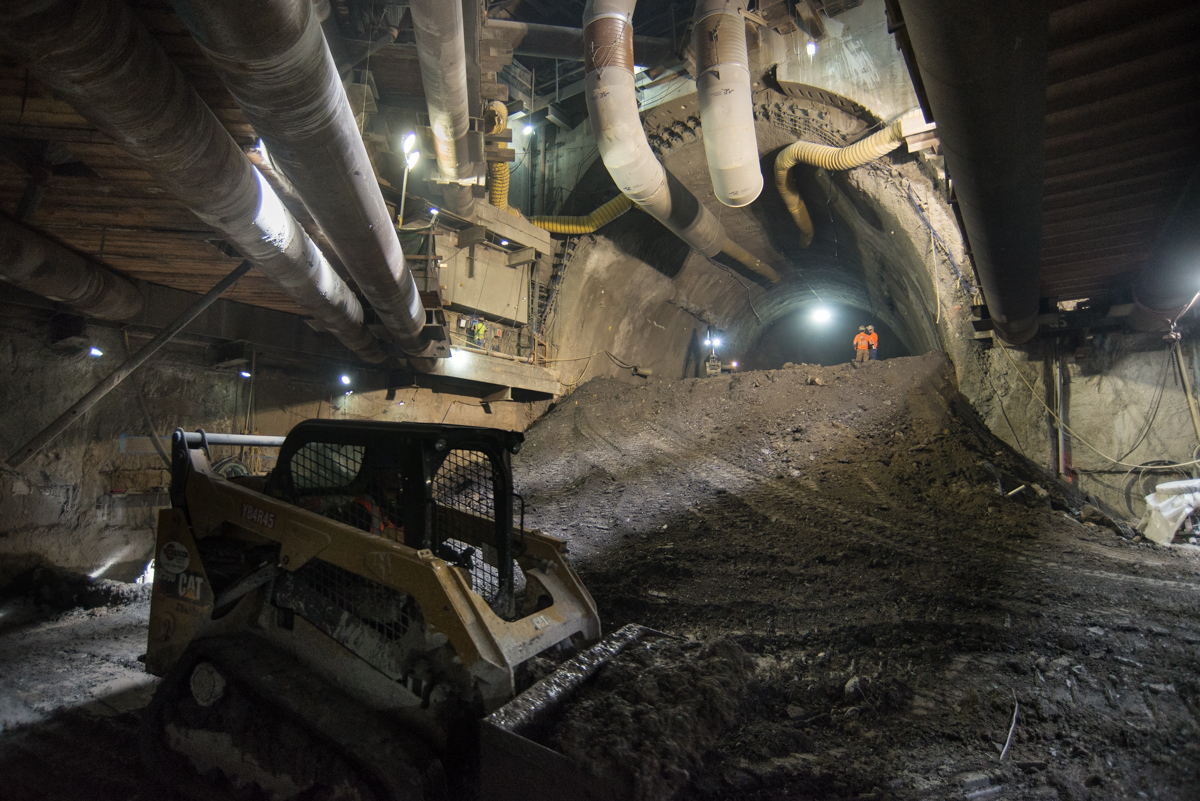 With the reinforced shotcrete dividers now removed, workers have backfilled half of the cross-cut cavern.  Once a ramp is built up, heavy machinery can be moved in. Central Subway | Project Advancement 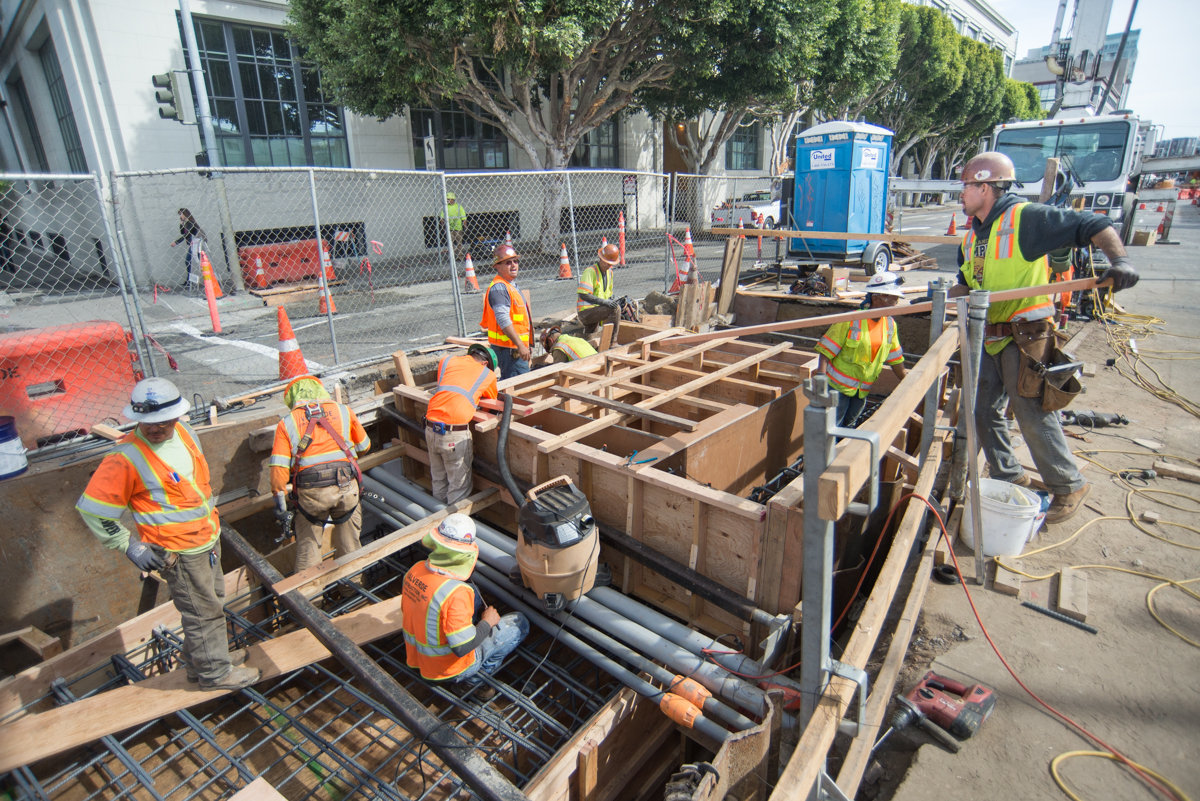 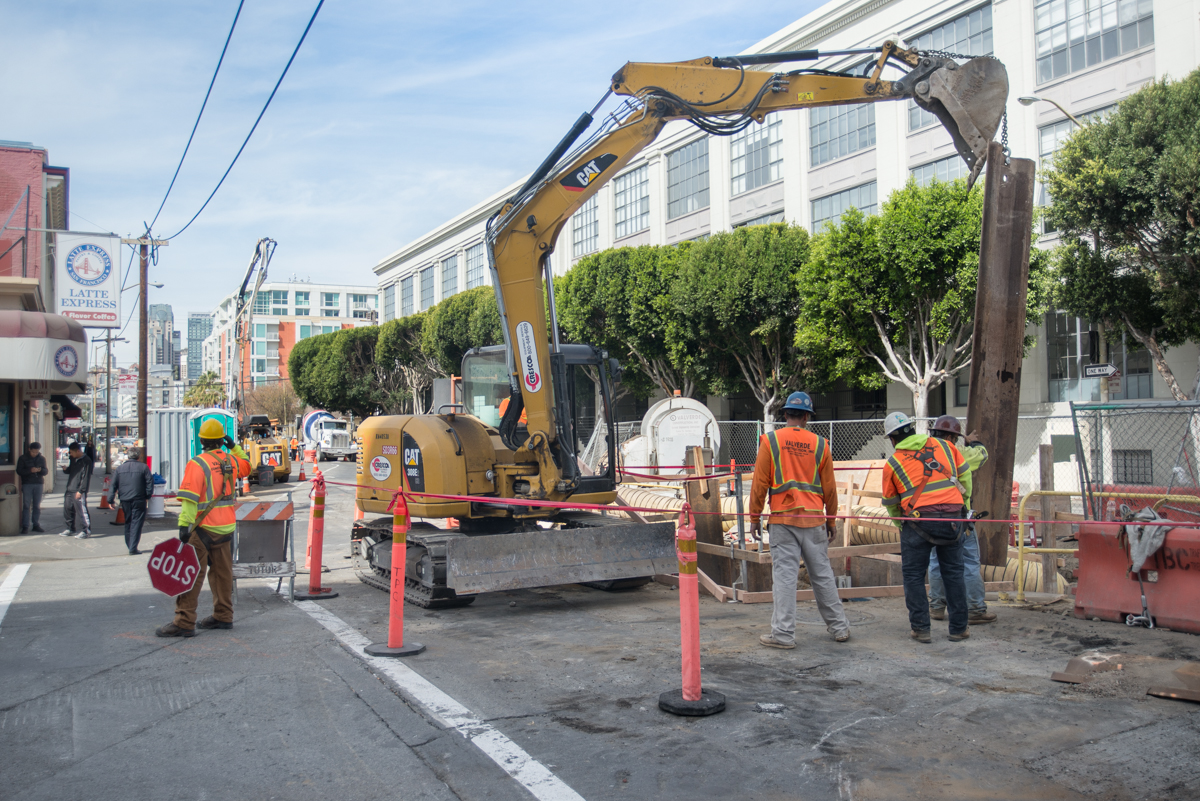 Steel sheet piles are lowered into place to reinforce an excavation site at 4th and Bluxome. 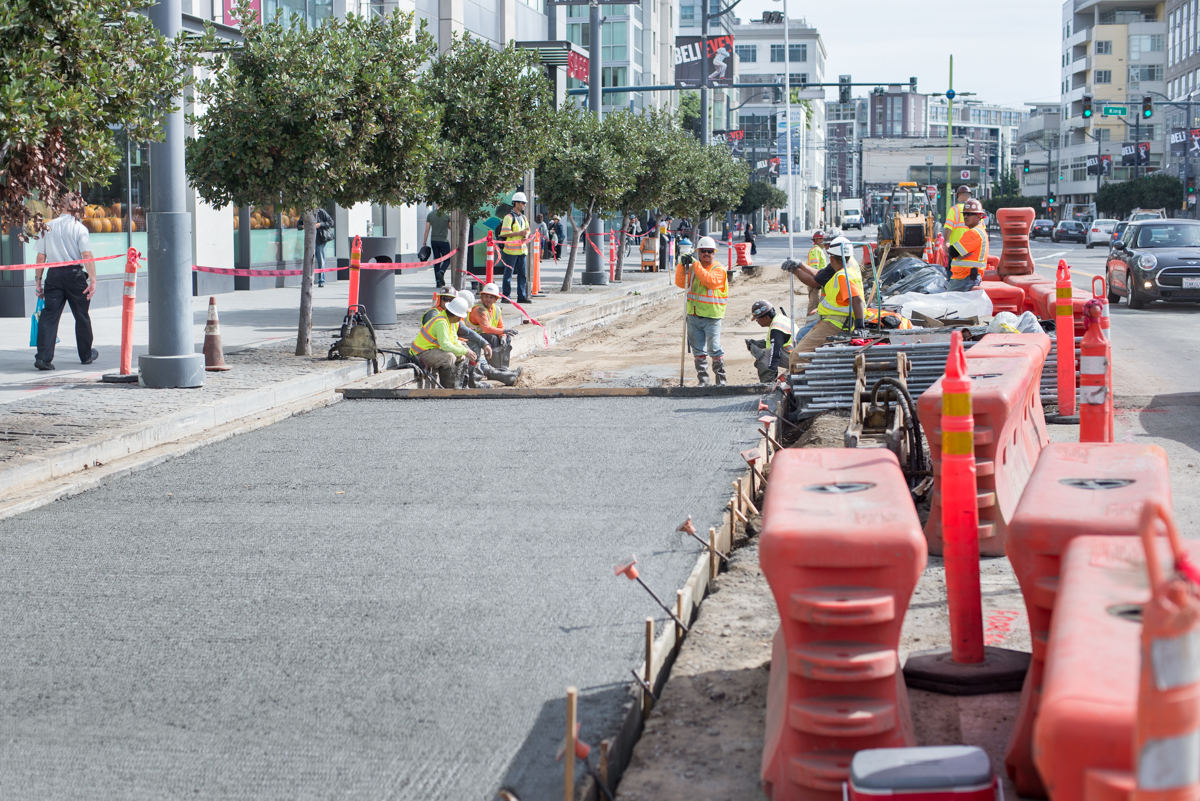 Workers have begun constructing a new road slab on the east side of 4th between King and Townsend. Overview 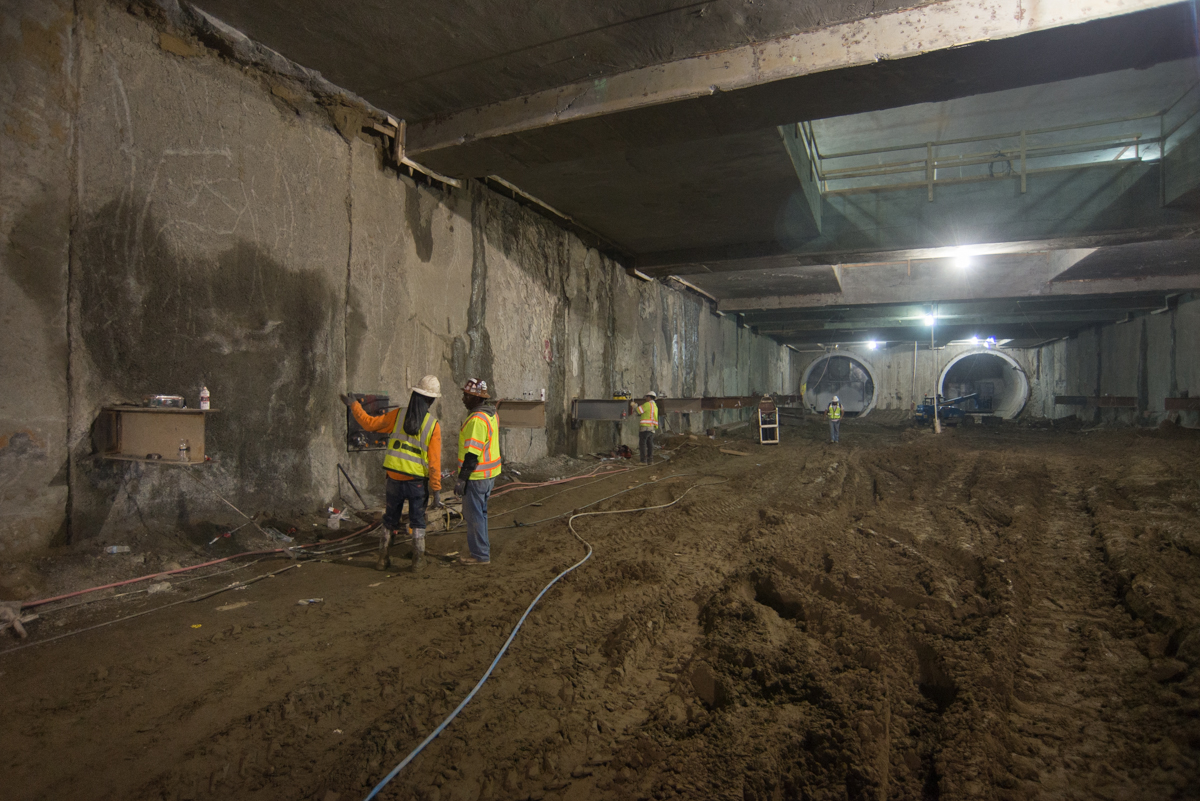 Steel brackets are being welded to the exterior slurry walls, which will carry the weight of temporary reinforcing beams. Yerba Buena | Moscone Station

Roadway excavation on the east side of 4th Street south of Howard began on Monday, October 10th, and will last several days.  Excavation of the Yerba Buena/Moscone Station underneath 4th Street between Folsom and Clementina continues.  The installation of utilities on 4th near Howard is ongoing. The current traffic configuration from north of the station to Howard Street will remain.  Excavation continues below mezzanine level. 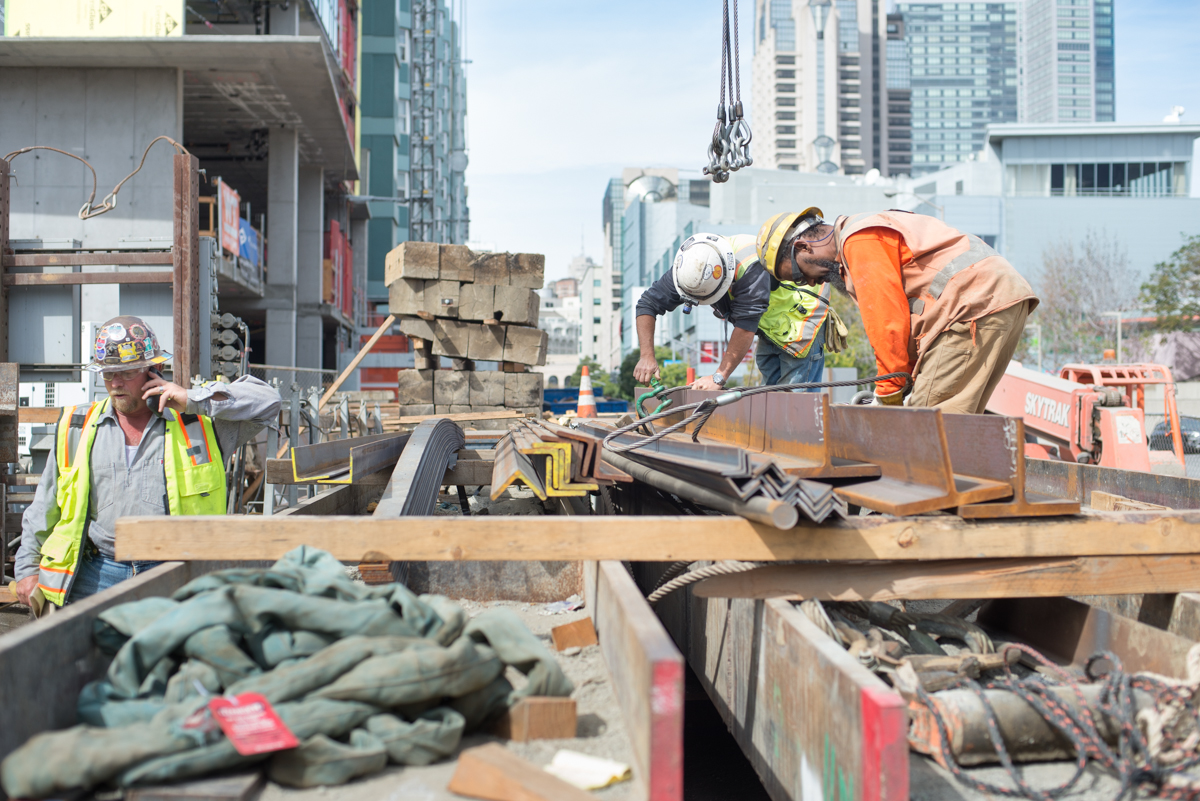 A bundle of reinforcing steel is prepared to be lifted by crane at the staging area on the west side of 4th. 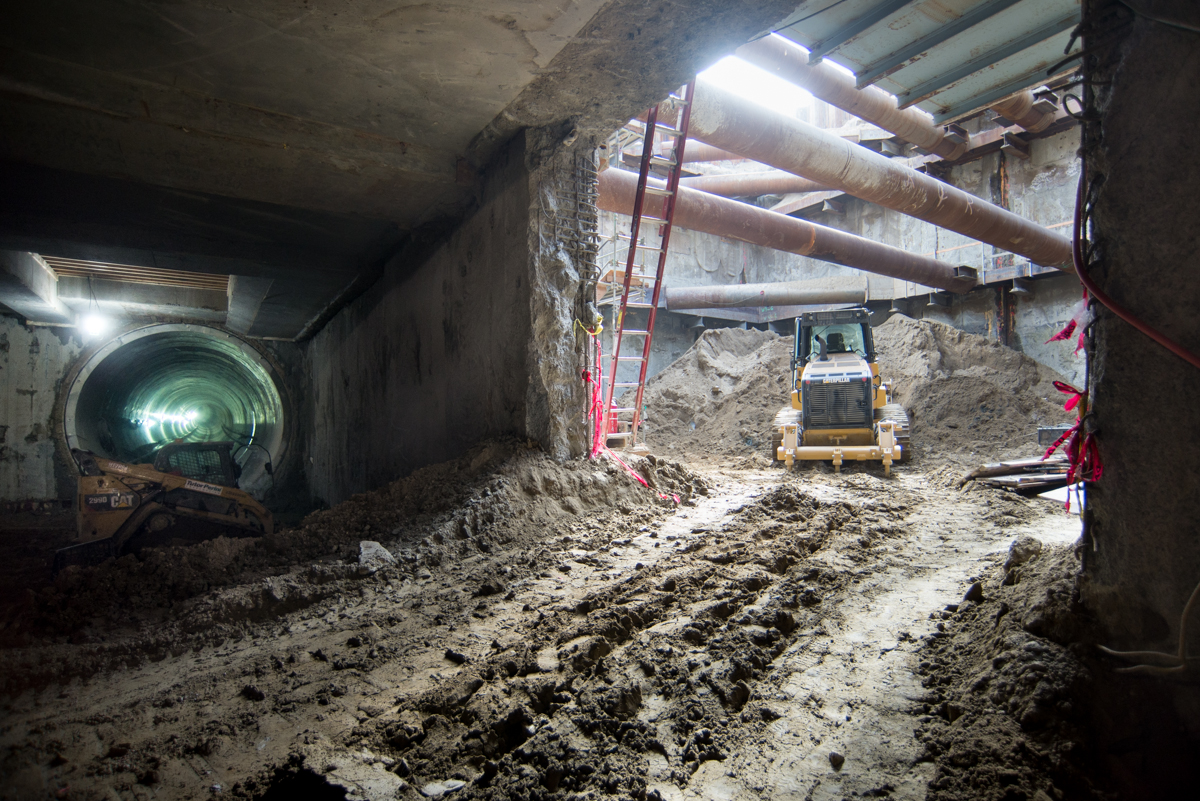 Light pours in the platform level access portal, used to carry out excavated soil and bring in materials and supplies. Overview

What: Roadway excavation for utility work
Time:  7a.m - 3:30p.m.
When: Monday to Friday
Where: East side of 4th Street south of Howard

What: Water line replacement and sewer installation
Time:  7a.m.- 4p.m.
When: Monday to Friday
Where: 4th Street between Howard Street and Folsom Street What to expect 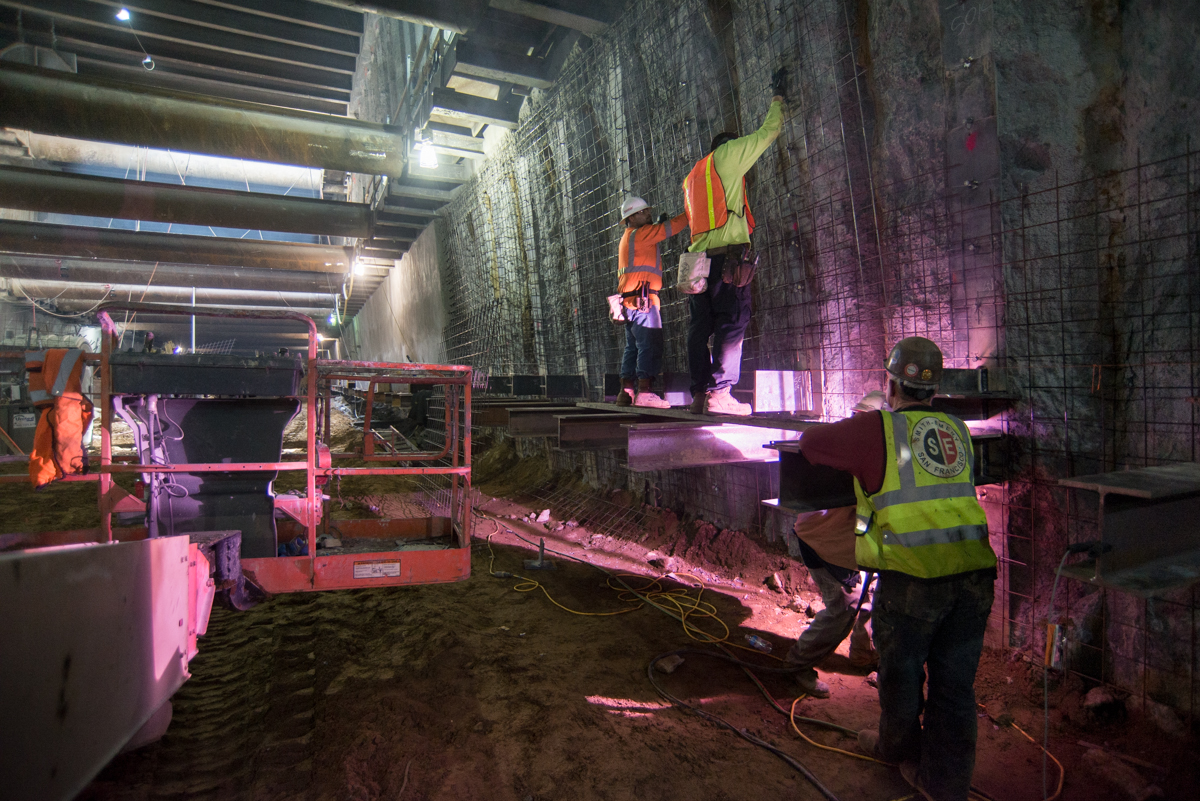 Brackets are welded to the station's exterior walls while steel mesh is installed above, to reinforce shotcrete ahead of waterproofing. Union Square | Market Street Station 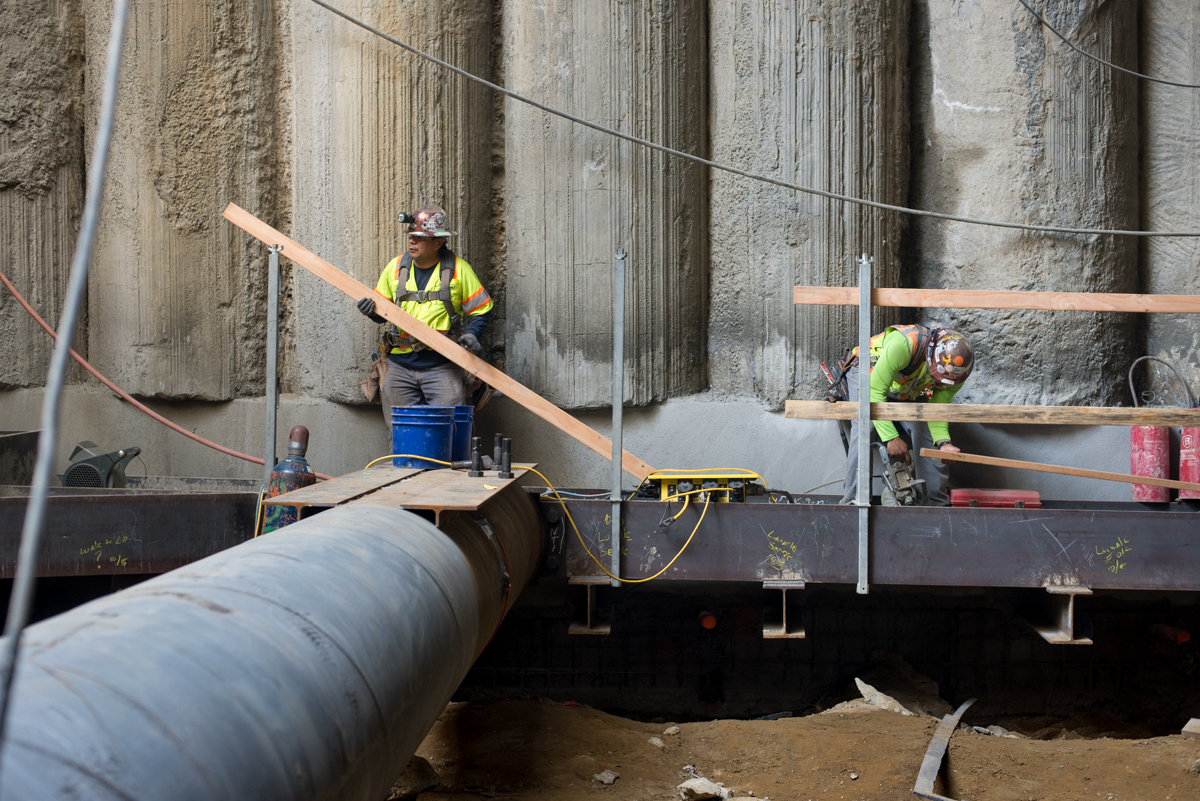 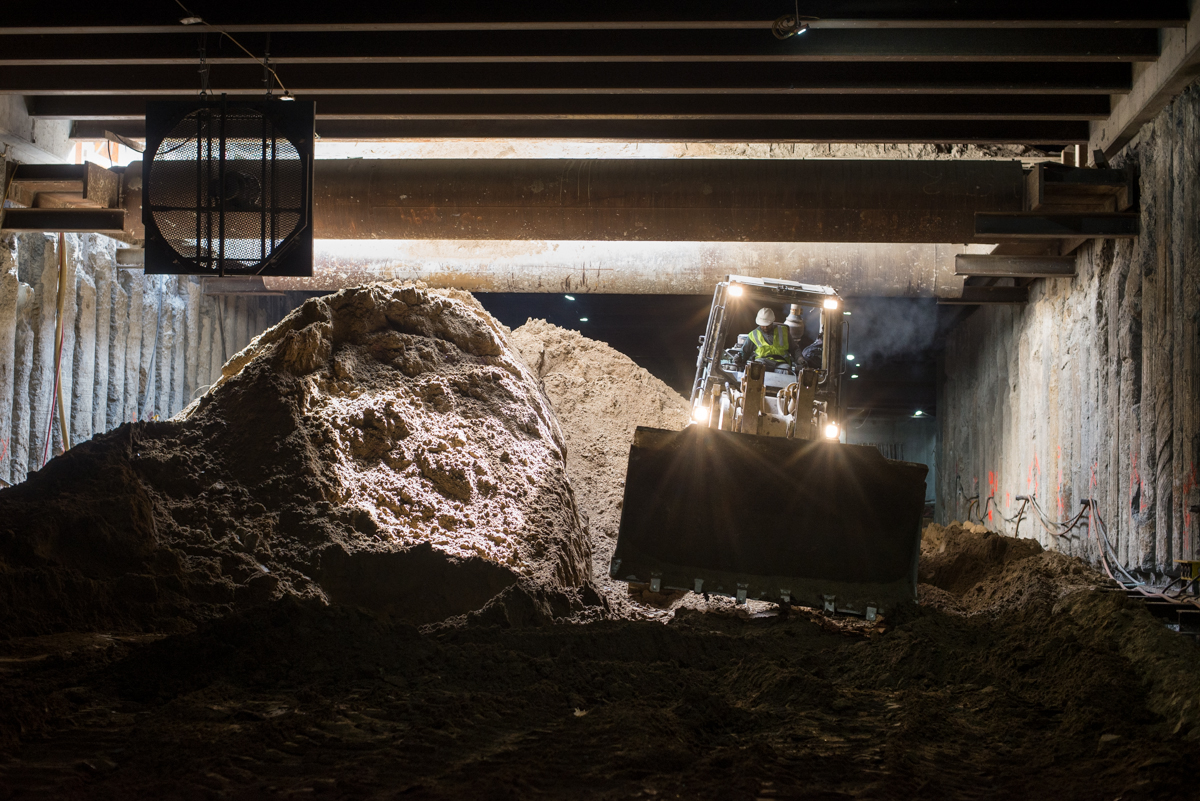 A bulldozer driver shuttles excavated material back and forth from the station box to a collection area just north of Ellis. Overview 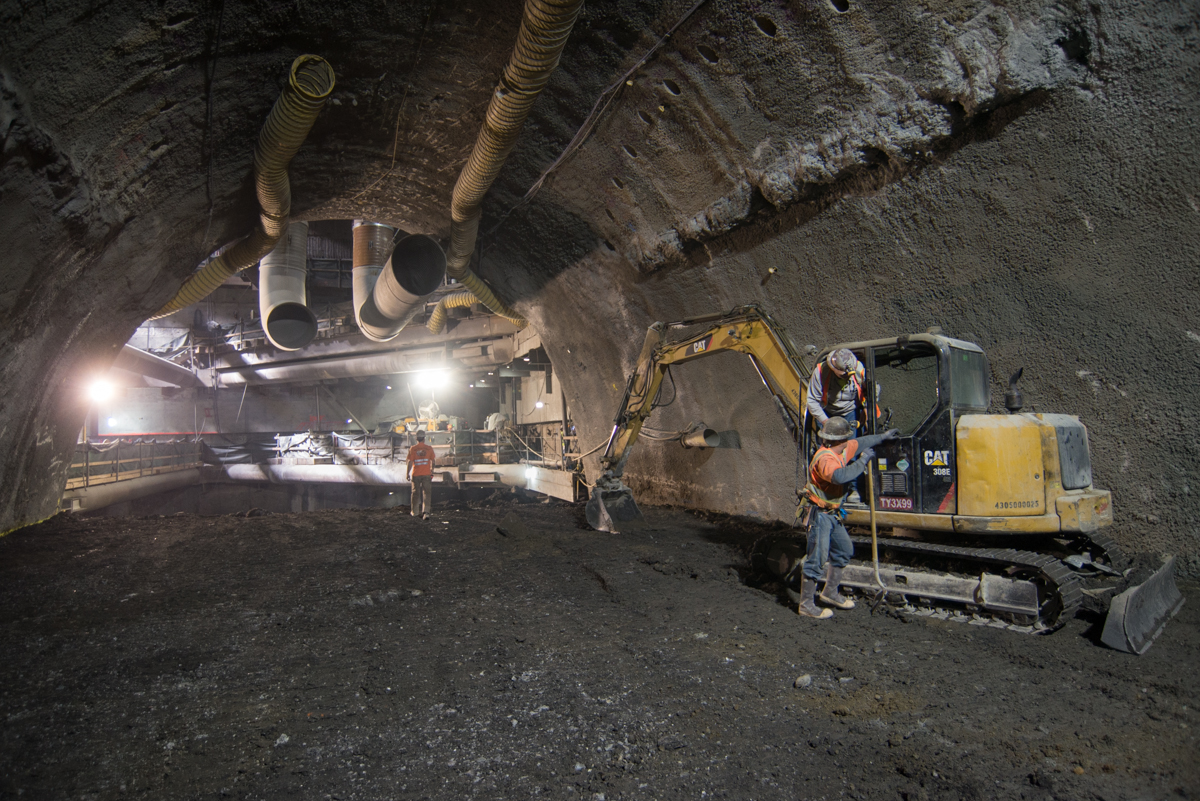 The cross-cut cavern under the Stockton and Washington intersection has now been opened up and backfilled to prepare for drilling work. Chinatown Station The construction of an underground Chinatown Station uses the sequential excavation method (SEM) along Washington Street and Stockton Street. The SEM provides a high degree of flexibility during construction and makes it possible to control virtually all kinds of ground conditions, thereby greatly reducing the risks of construction. This method of tunnel construction is used worldwide for small to large openings in a variety of ground types ranging from rock to soil. 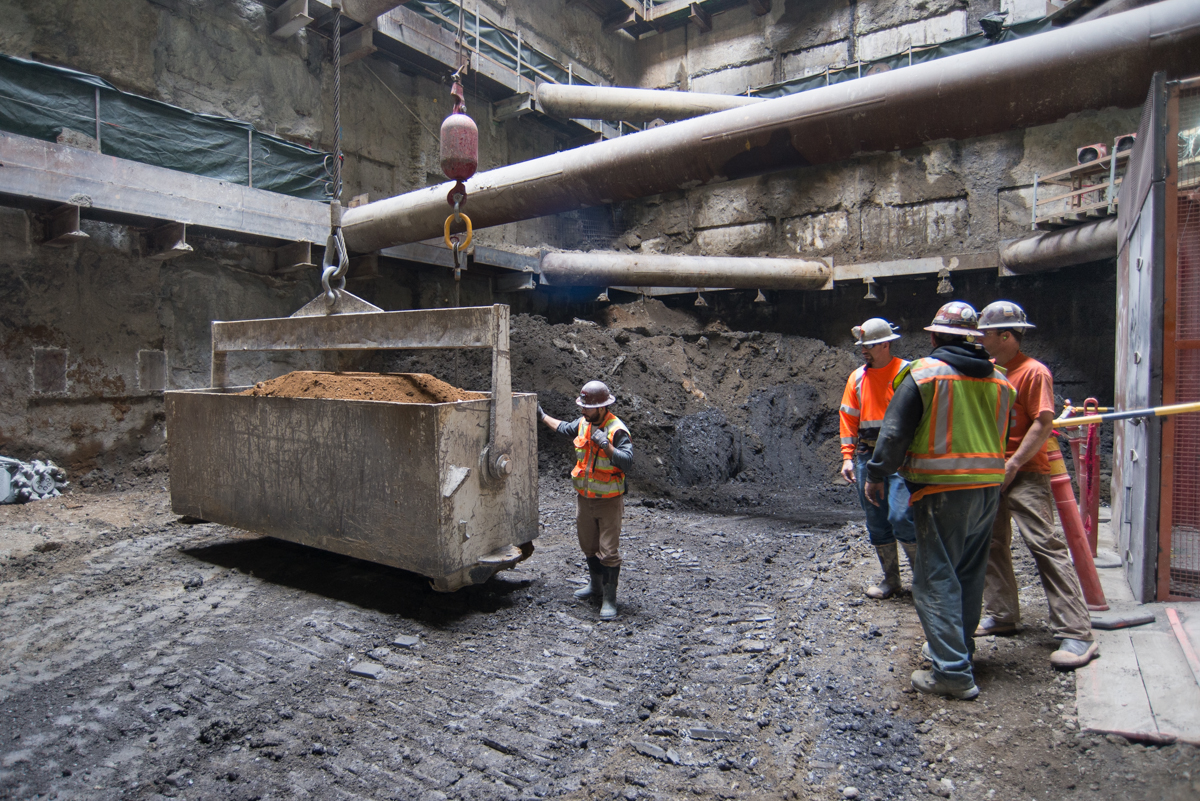 Soil is lowered from the surface to be used in temporary backfilling work inside the station headhouse. 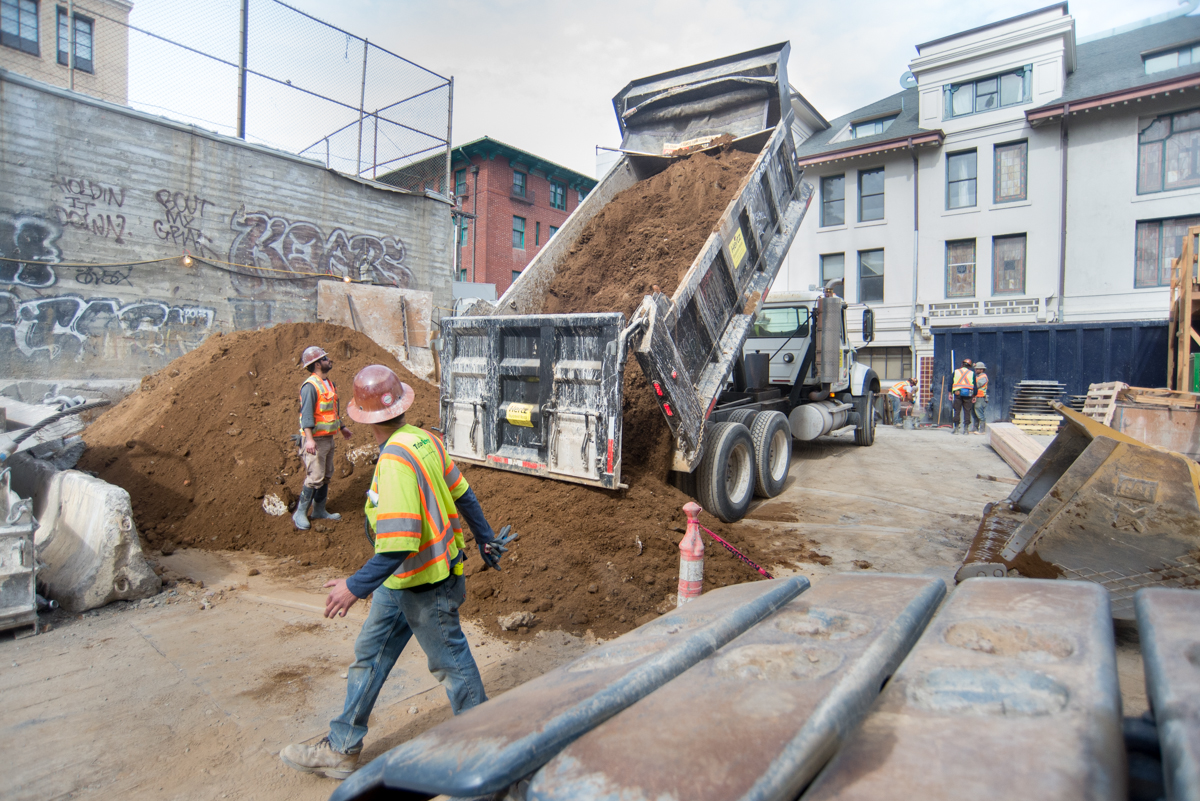 A dump truck delivers soil which will be used to backfill a portion of the cross-cut cavern. Overview