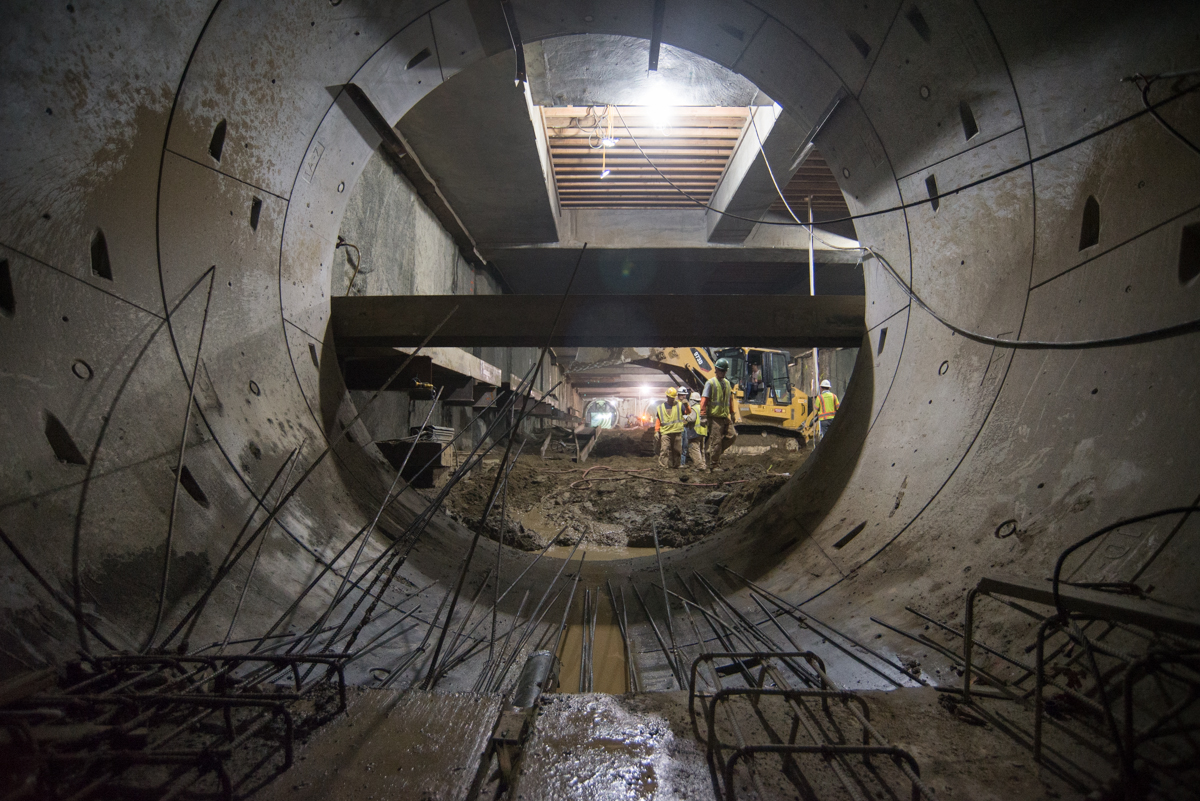 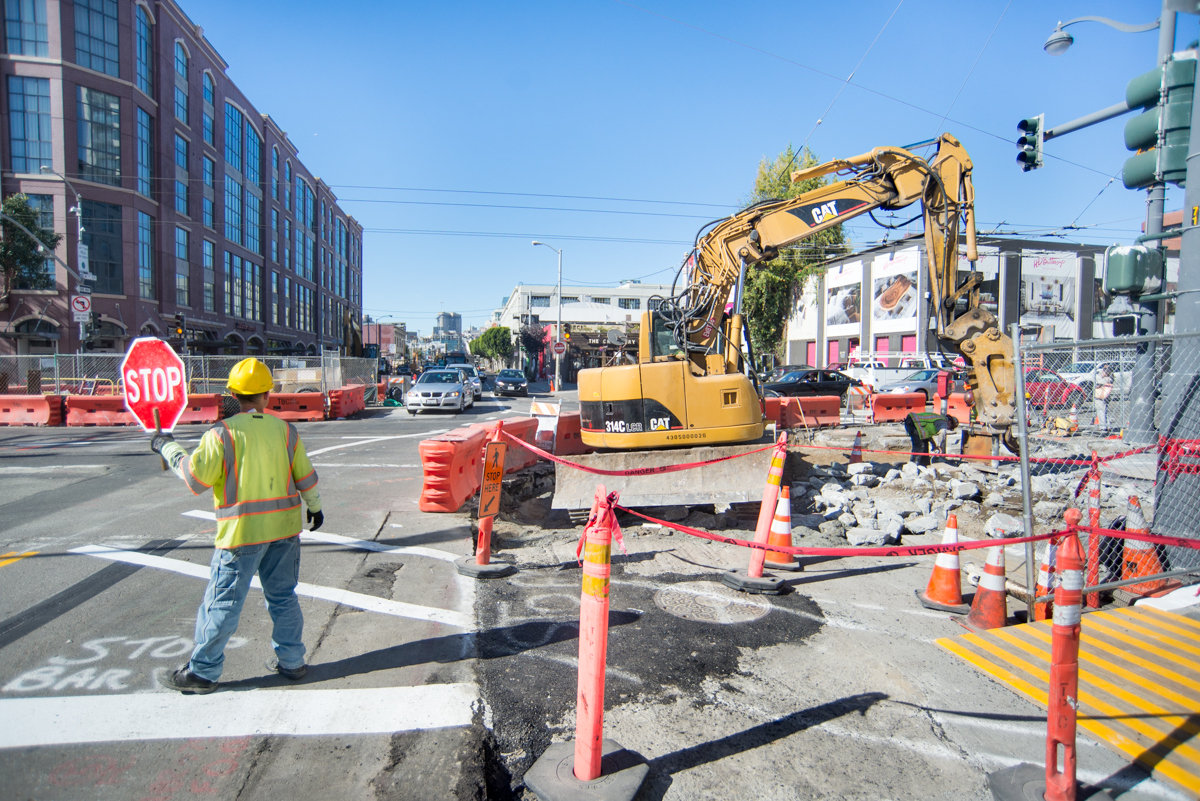 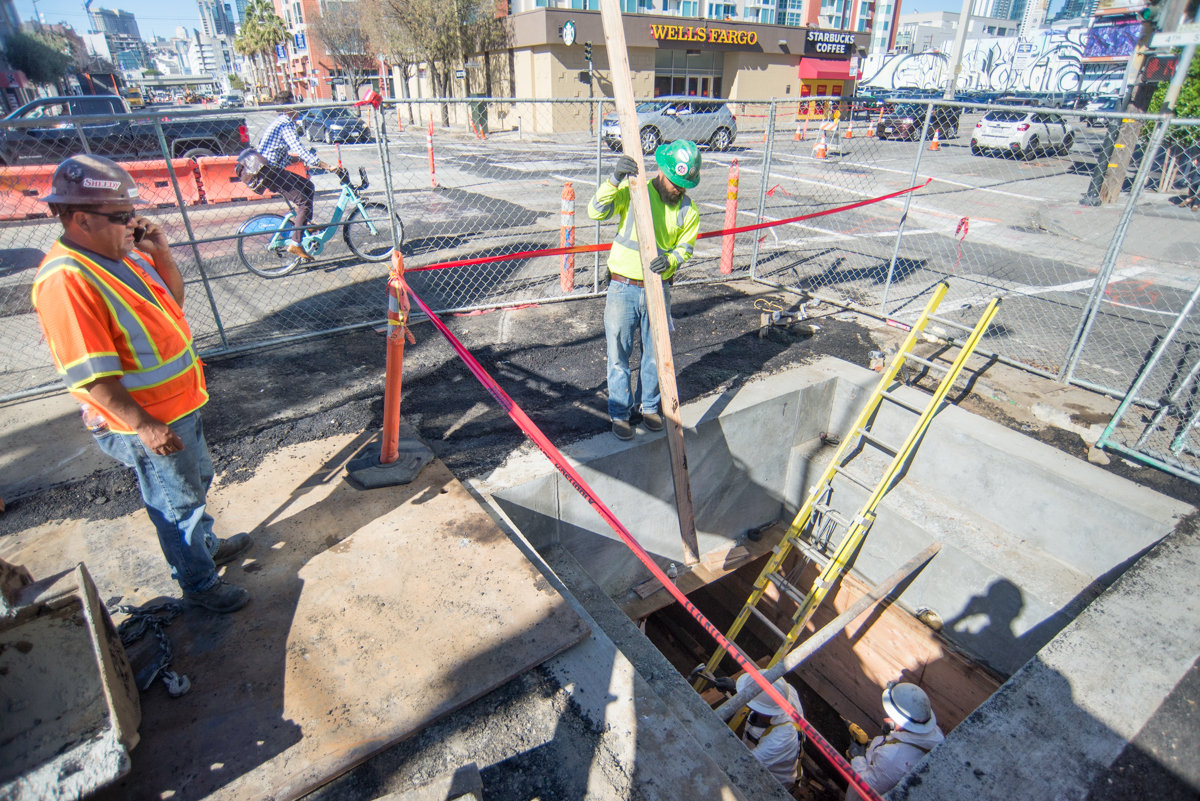 At 4th and Brannan, wood used in concrete forms is removed following the construction of a new sewer roof. 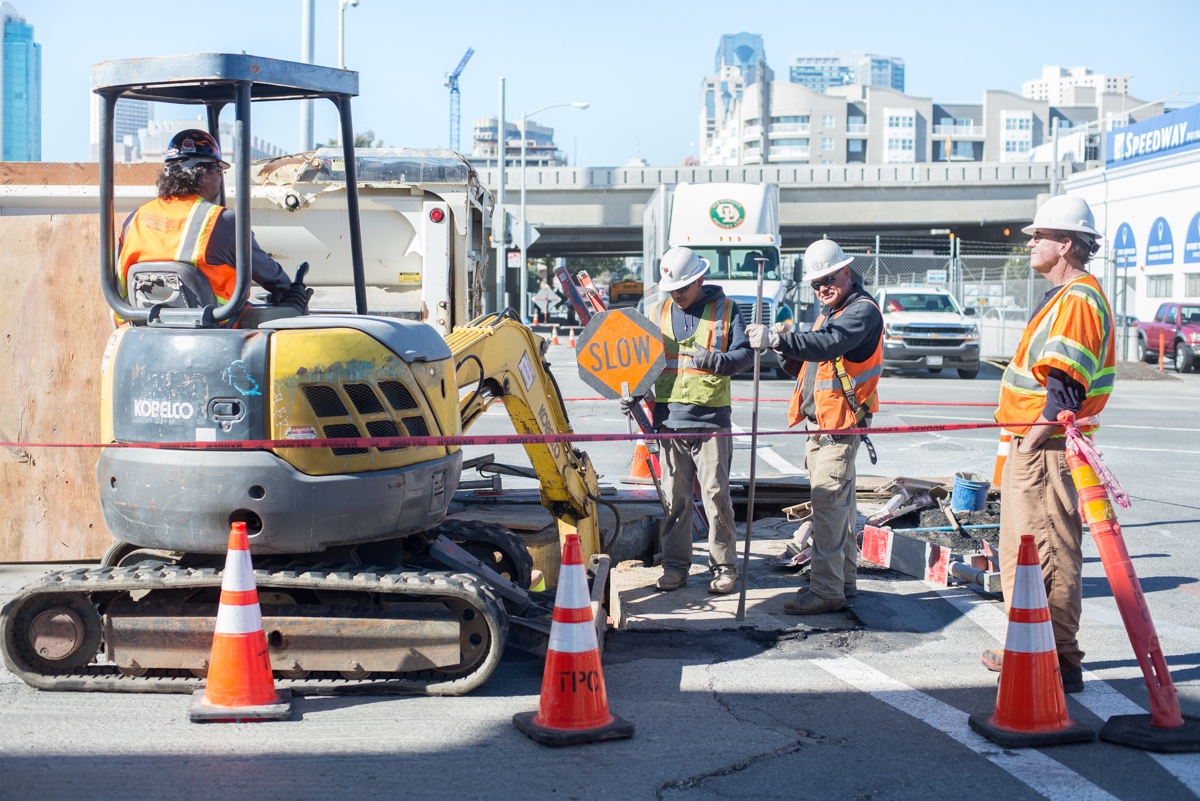 A trench is dug at 4th and Bryant to upgrade utilities. Overview 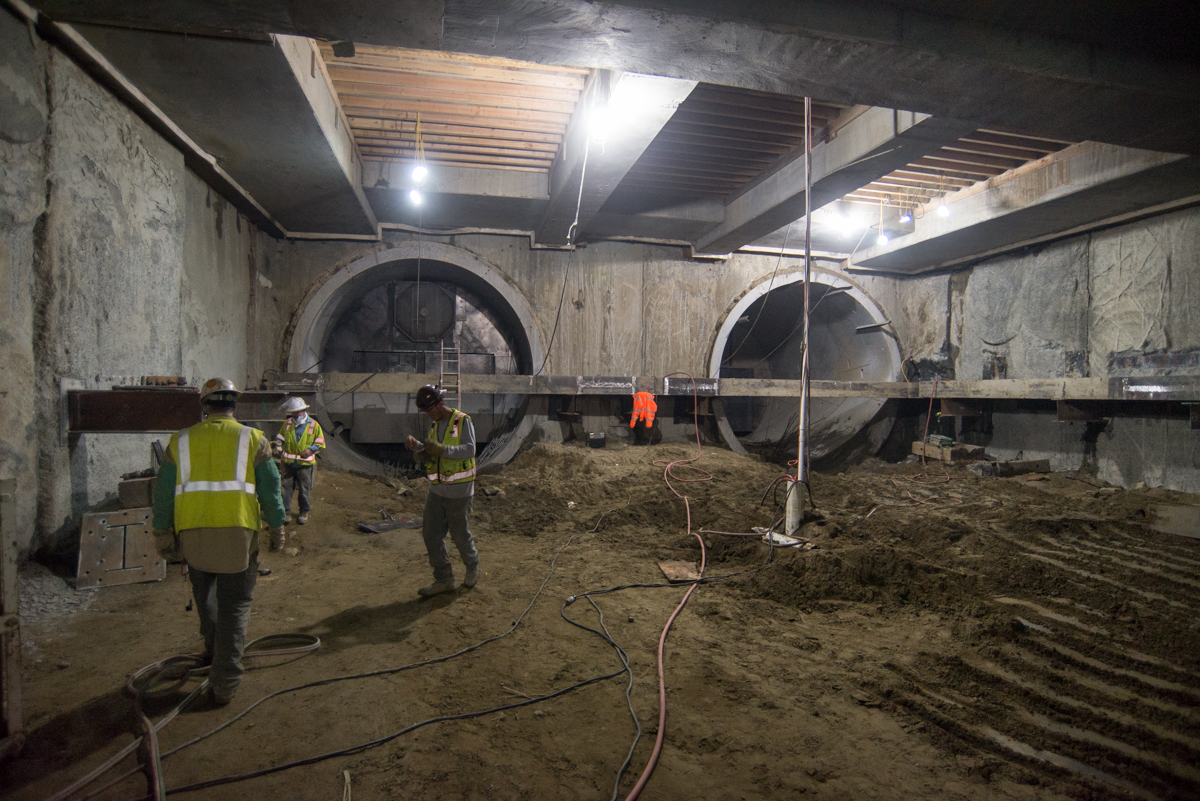 Large steel beams called "walers" are being installed as temporary bracing before workers begin the next phase of excavation inside the station box. Yerba Buena | Moscone Station

Roadway excavation on the east side of 4th Street south of Howard began on Monday, October 10th, and will last several days.  Excavation of the Yerba Buena/Moscone Station underneath 4th Street between Folsom and Clementina continues.  The installation of utilities on 4th near Howard is ongoing. The current traffic configuration from north of the station to Howard Street will remain.  Excavation continues below mezzanine level. 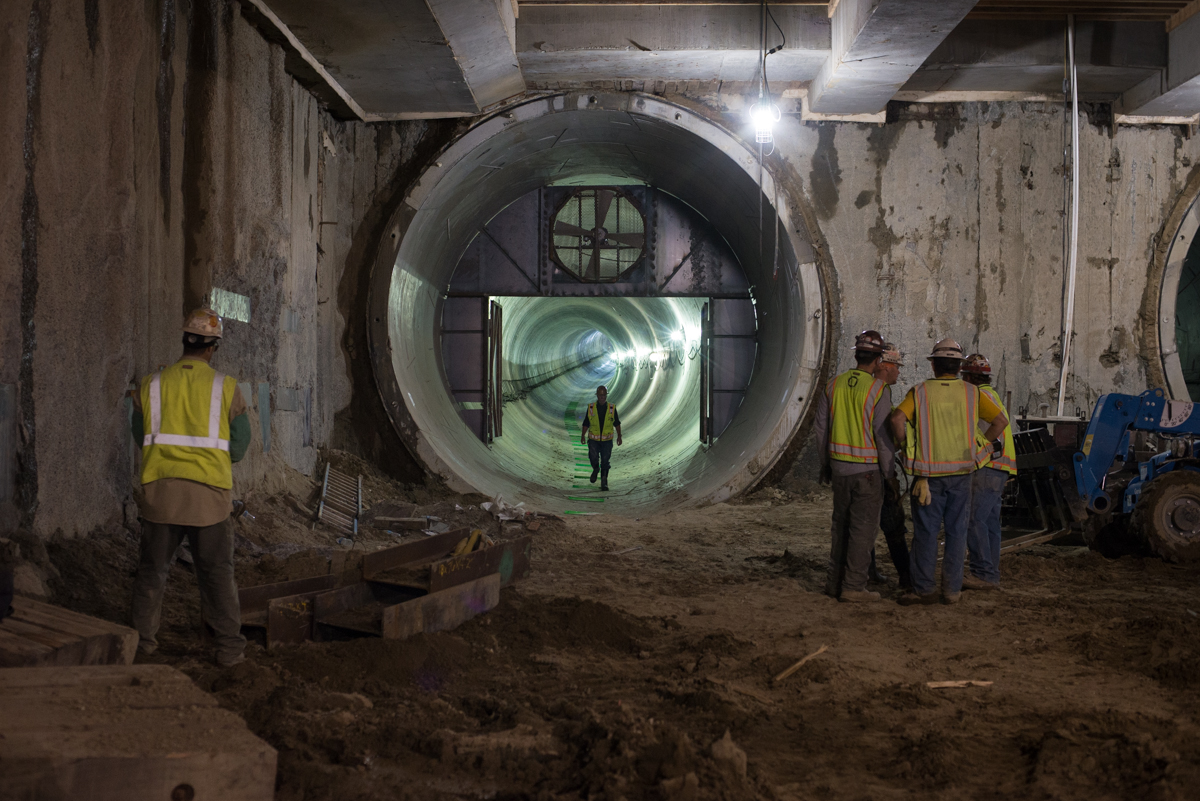 A crew discusses operations near the portal to the northbound tunnel inside the station box. 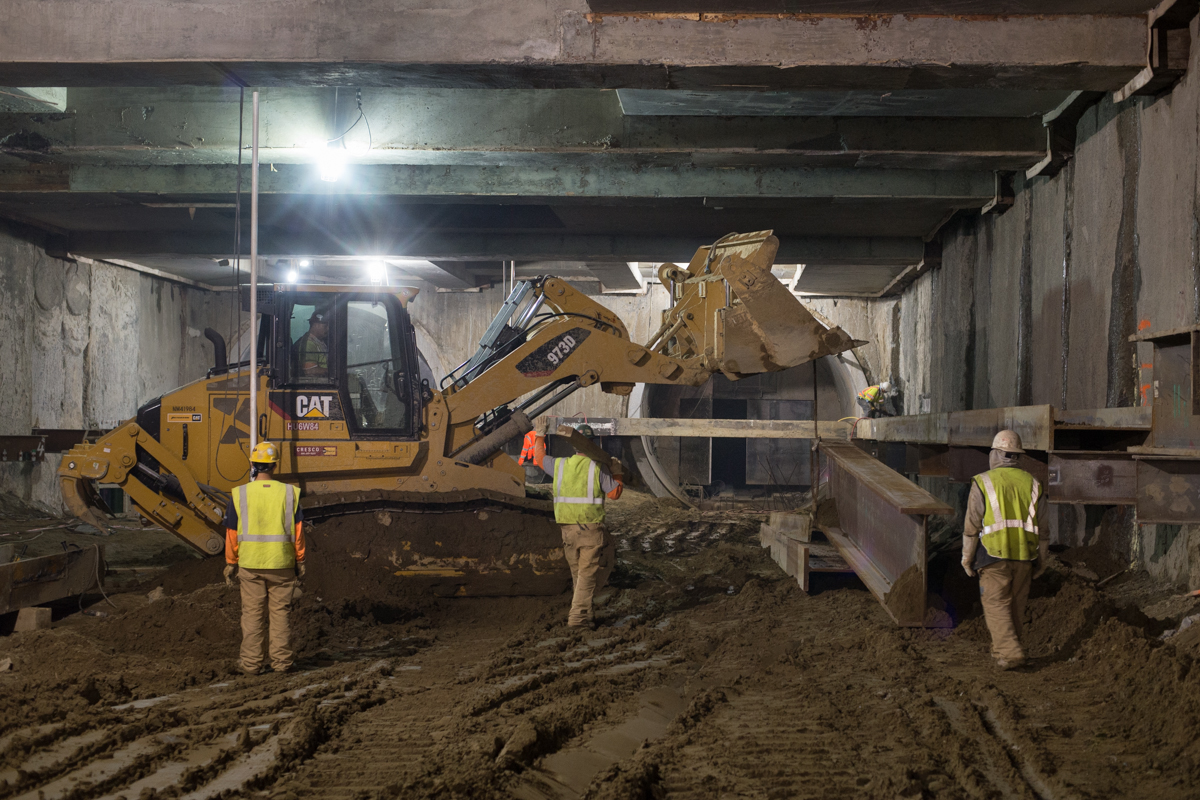 Large steel beams used in temporary bracing inside the station box are moved into place along the east wall. Overview

What: Roadway excavation for utility work
Time:  7a.m - 3:30p.m.
When: Monday to Friday
Where: East side of 4th Street south of Howard

What: Water line replacement and sewer installation
Time:  7a.m.- 4p.m.
When: Monday to Friday
Where: 4th Street between Howard Street and Folsom Street What to expect 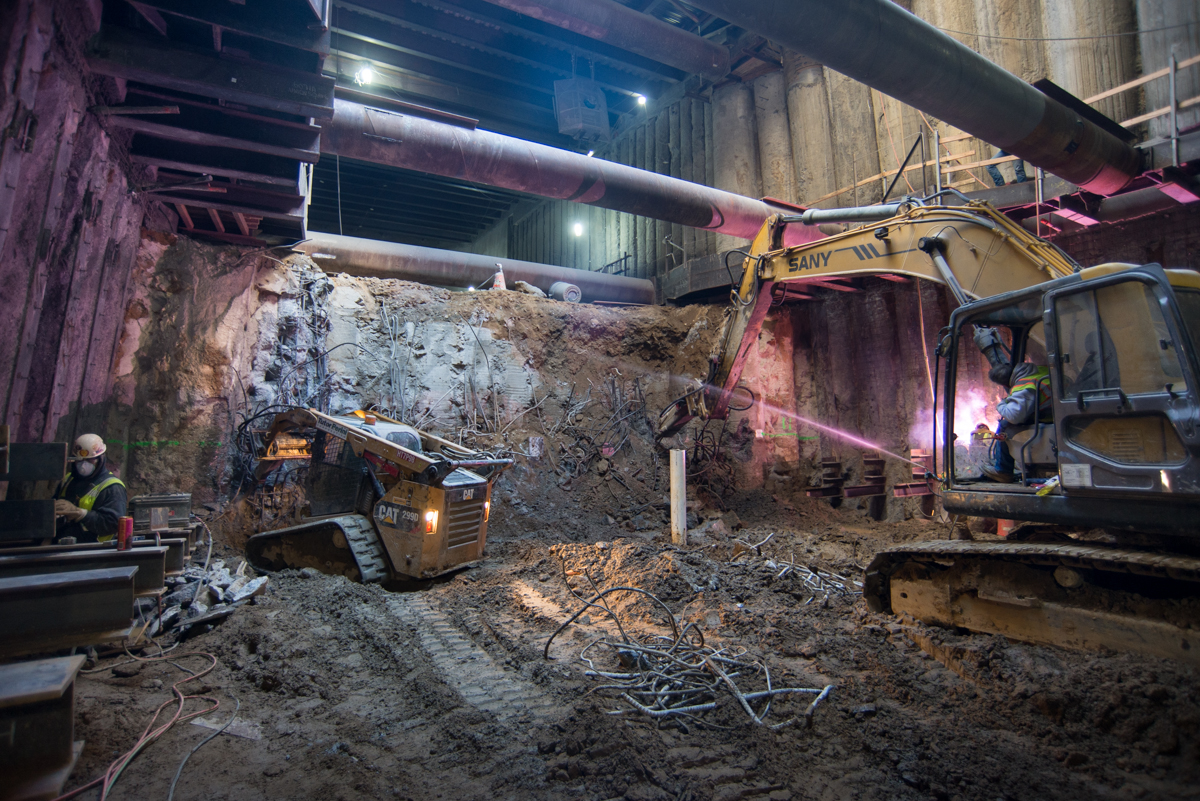 Heavy excavation equipment fitted with jackhammers work to chip away at a concrete wall inside the station box, near Geary. Union Square | Market Street Station 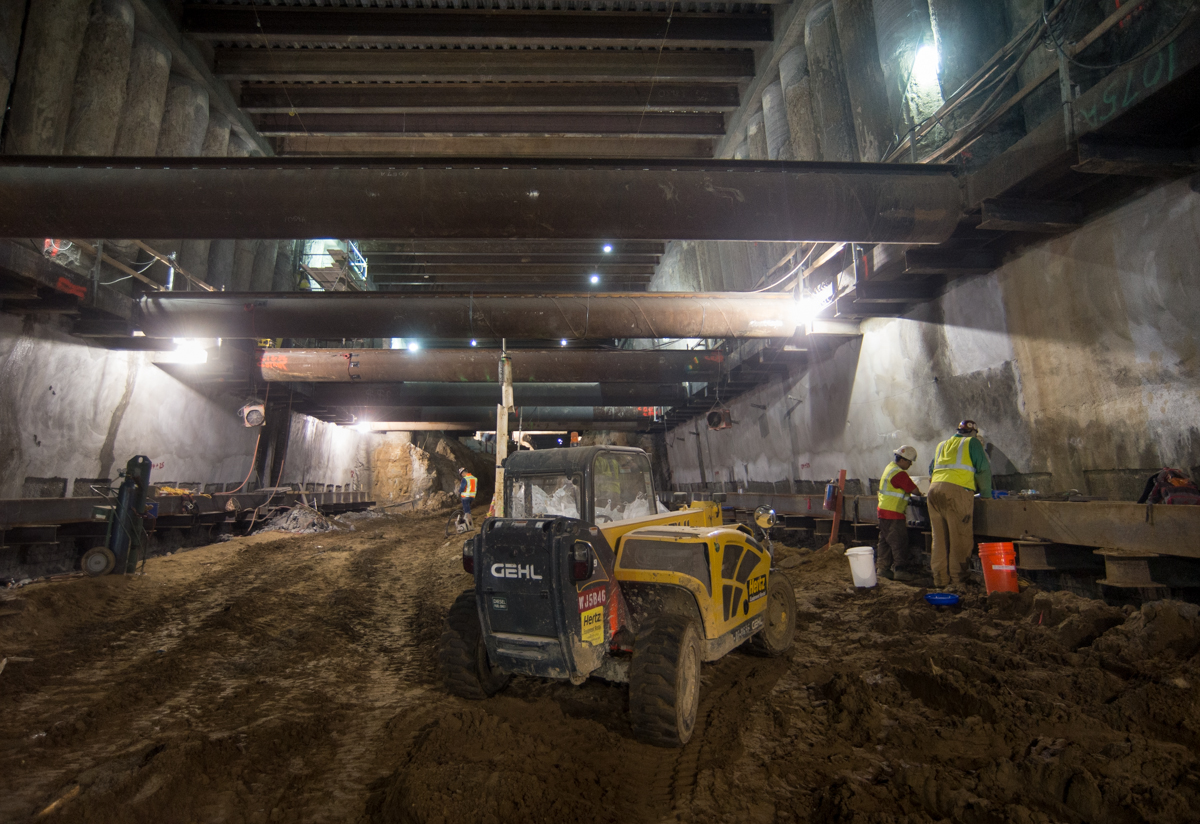 Steel brackets are installed on the west wall inside the station box. 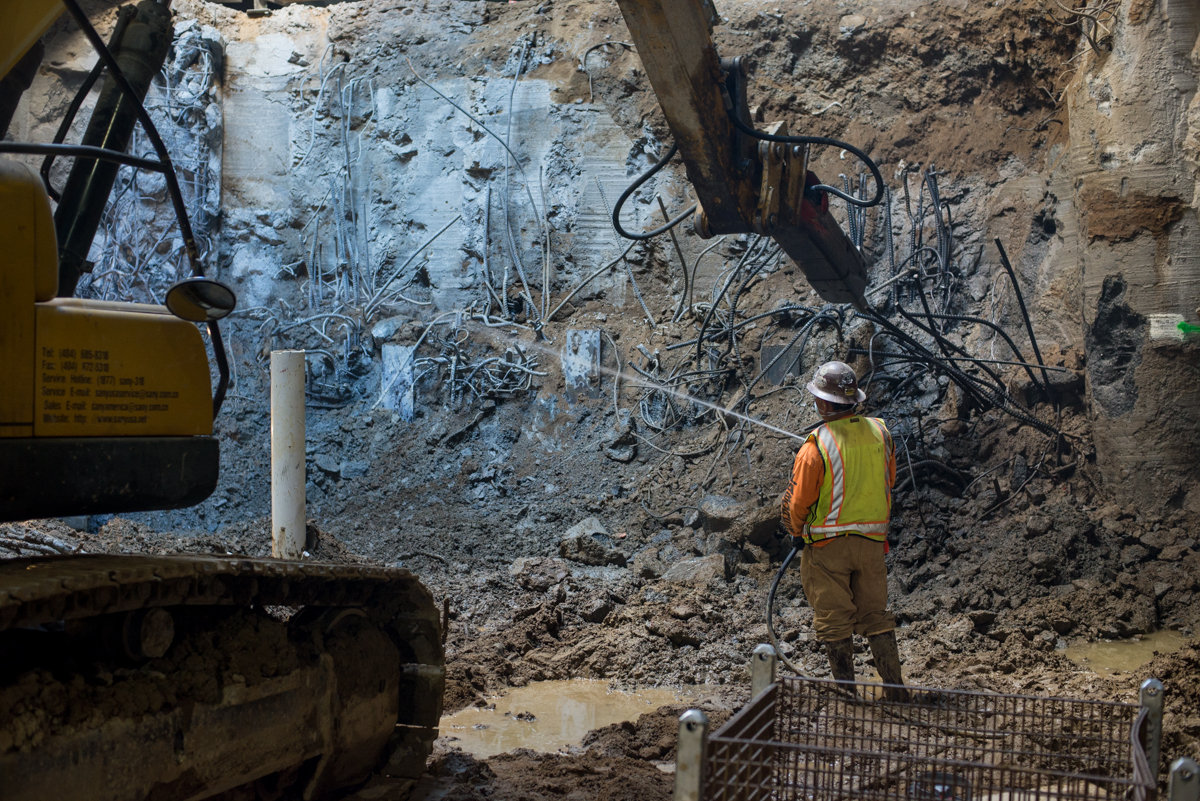 Water is sprayed to keep dust down when jackhammers are used. Overview 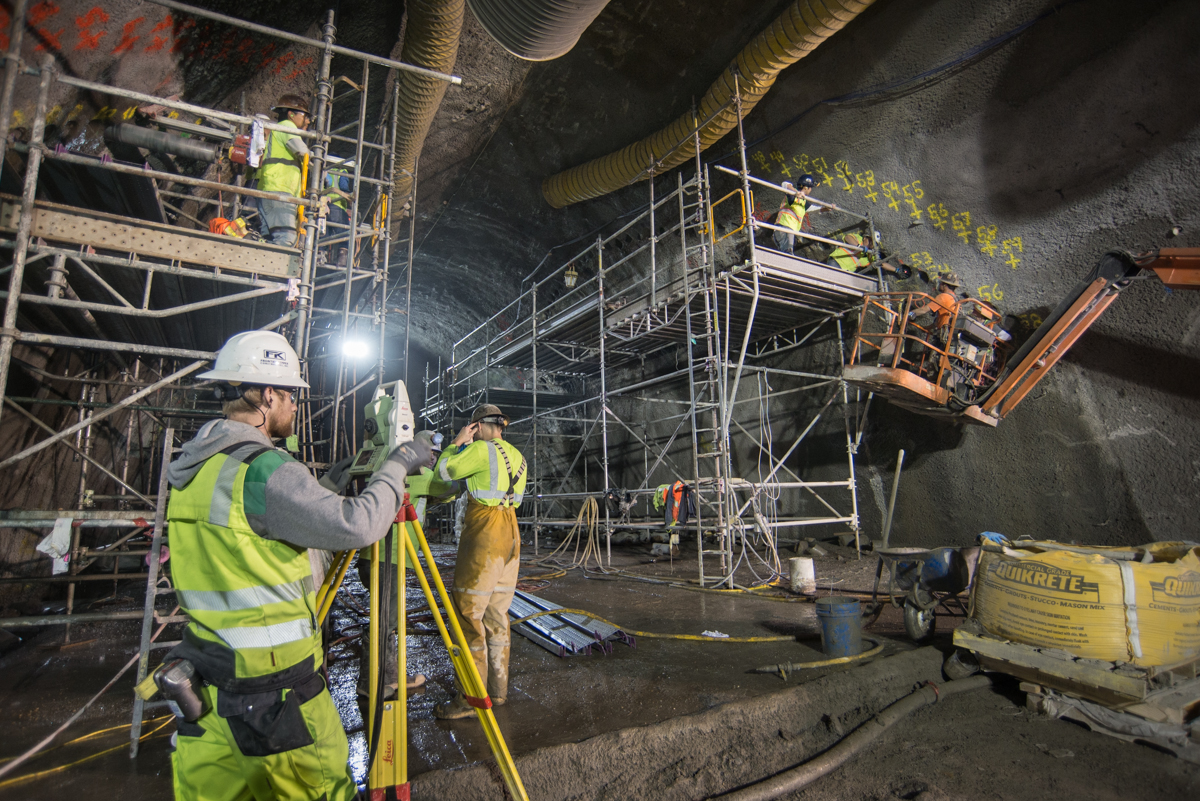 Scaffolding has been installed inside the cross-cut cavern to aid drilling work. Chinatown Station The construction of an underground Chinatown Station uses the sequential excavation method (SEM) along Washington Street and Stockton Street. The SEM provides a high degree of flexibility during construction and makes it possible to control virtually all kinds of ground conditions, thereby greatly reducing the risks of construction. This method of tunnel construction is used worldwide for small to large openings in a variety of ground types ranging from rock to soil. 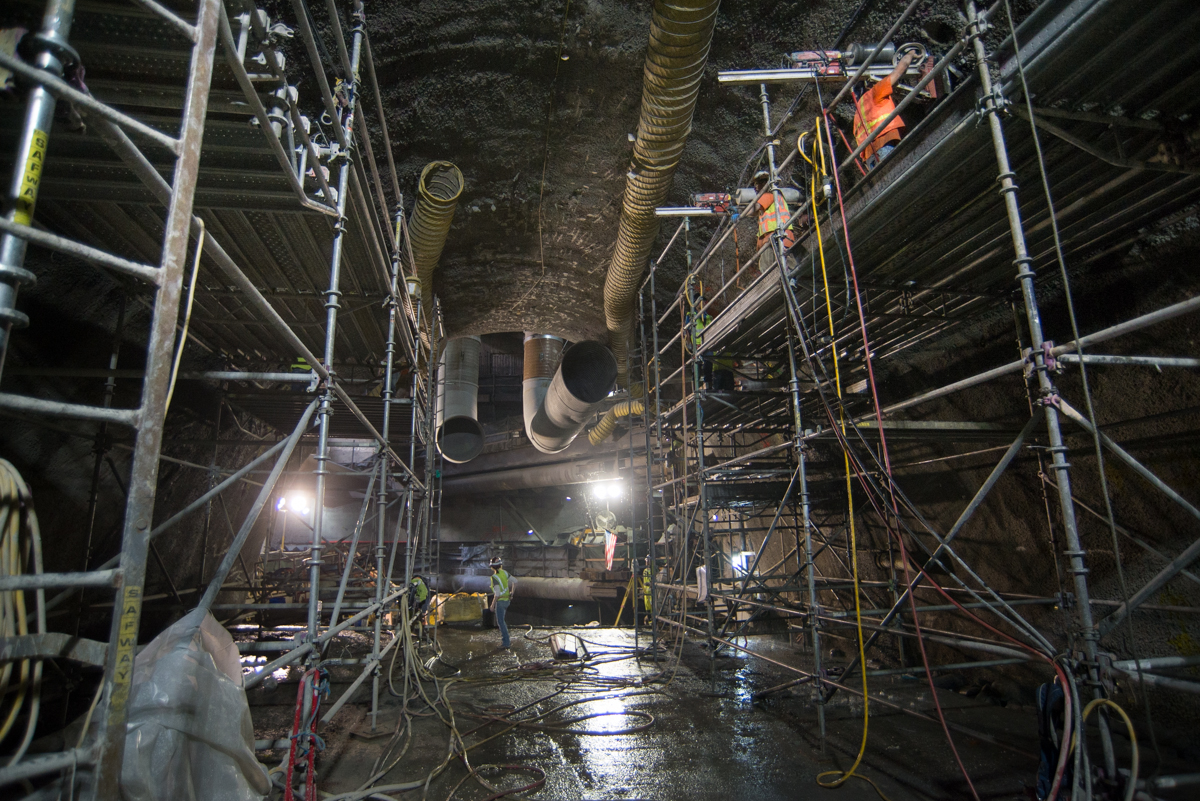 Pilot holes for future soil grouting work are being drilled atop scaffolding inside the cross-cut cavern. 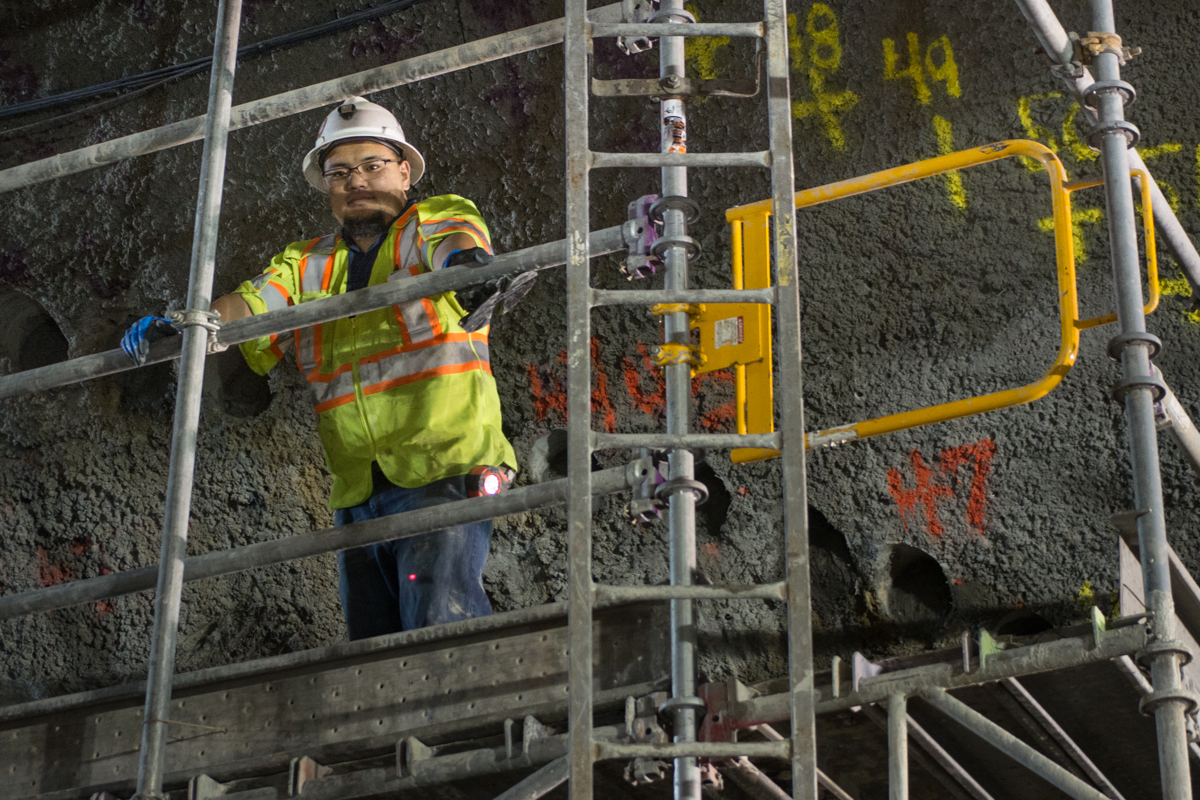 A project engineer looks over operations inside the cross-cut cavern. Overview