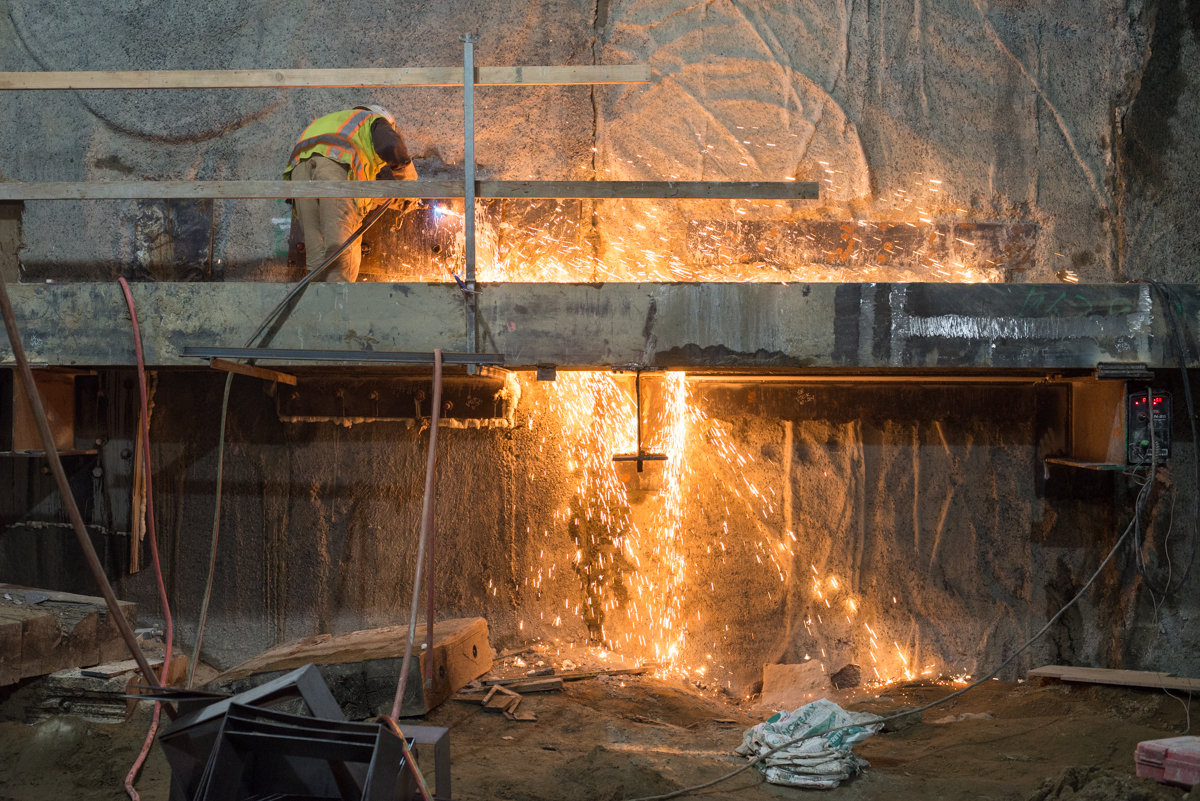 A shower of sparks fly as a worker adjusts the length of bolts inside the Yerba Buena/Moscone station box. Central Subway | Project Advancement 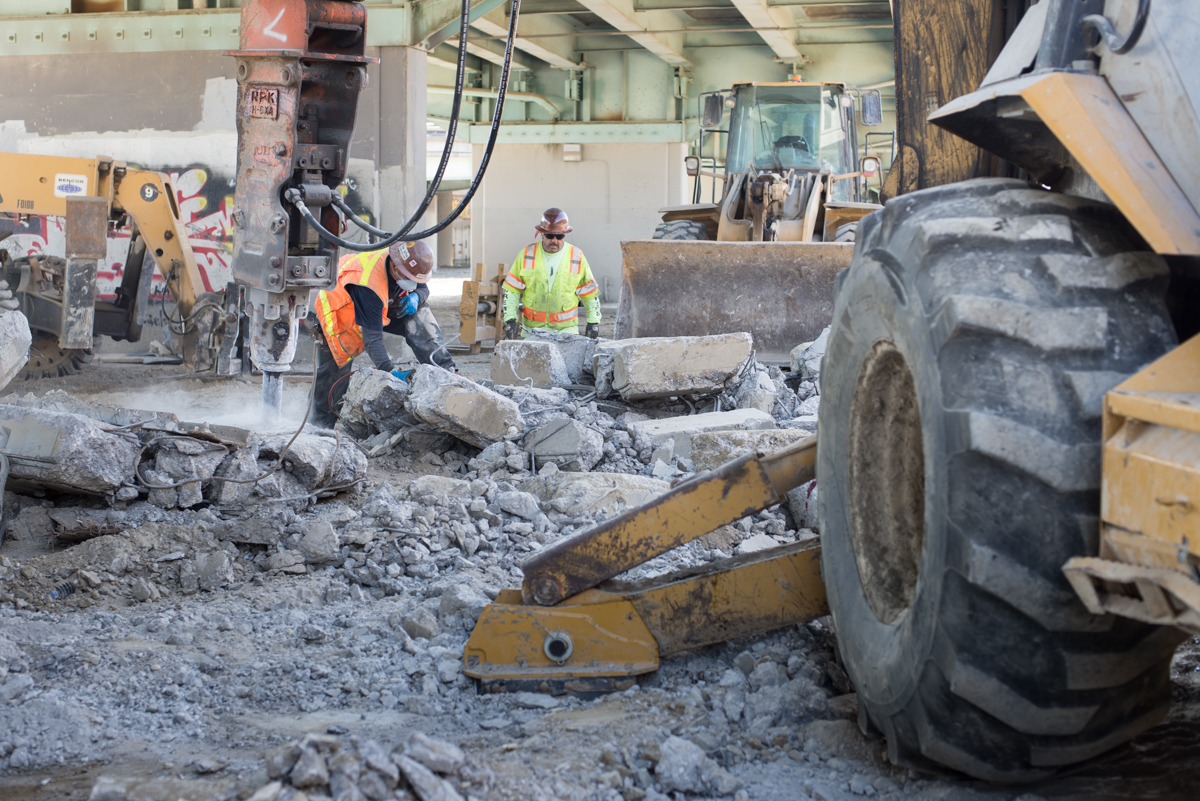 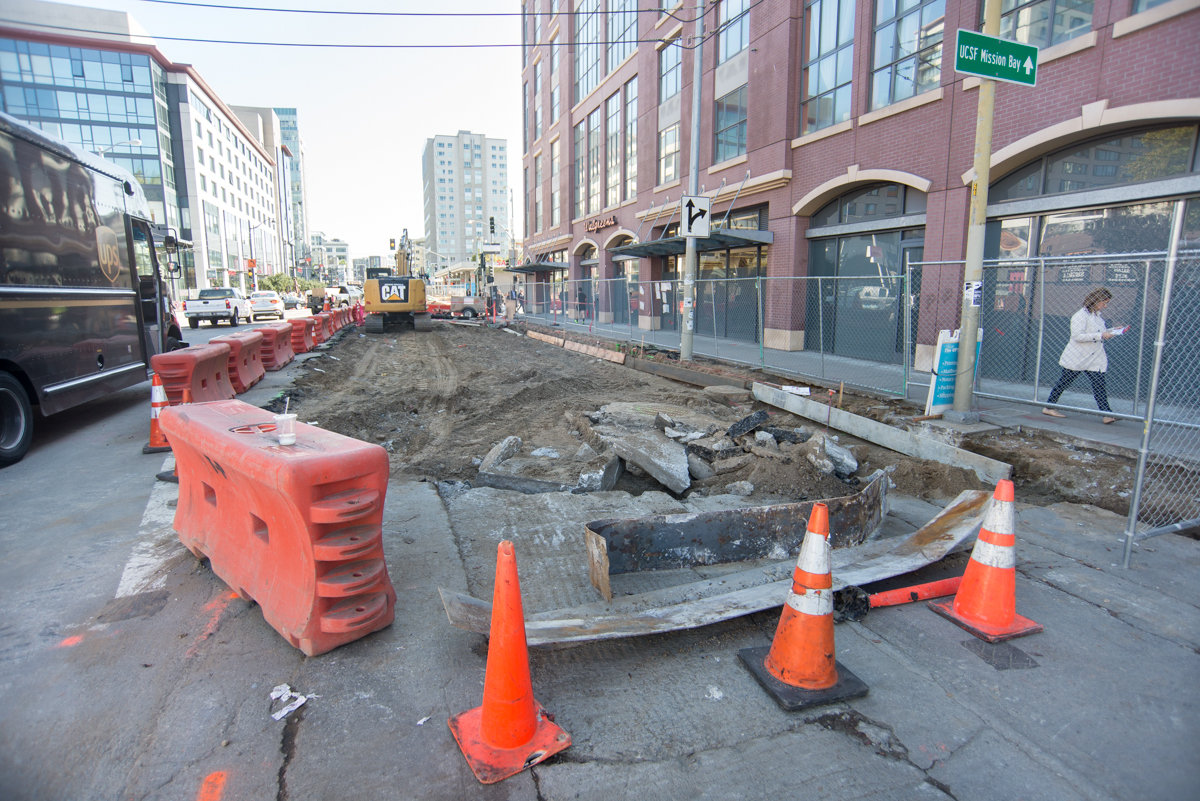 A new section of roadway is being constructed on the west side of 4th north of Townsend. 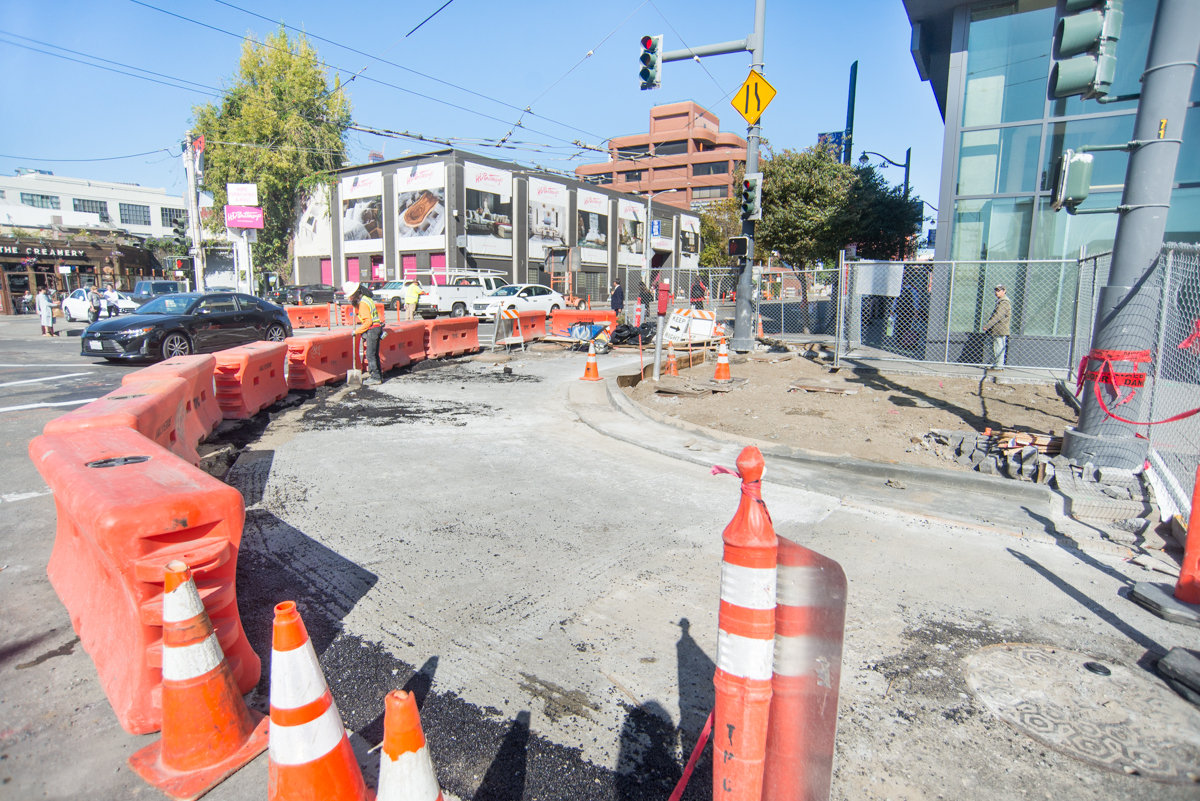 A new road slab and curb are being constructed at 4th and Townsend. Overview

What: Pavement renovation
Time: 7 a.m. - 5:30 p.m.
When: Monday to Saturday
Where: 4th Street between King and Bluxome 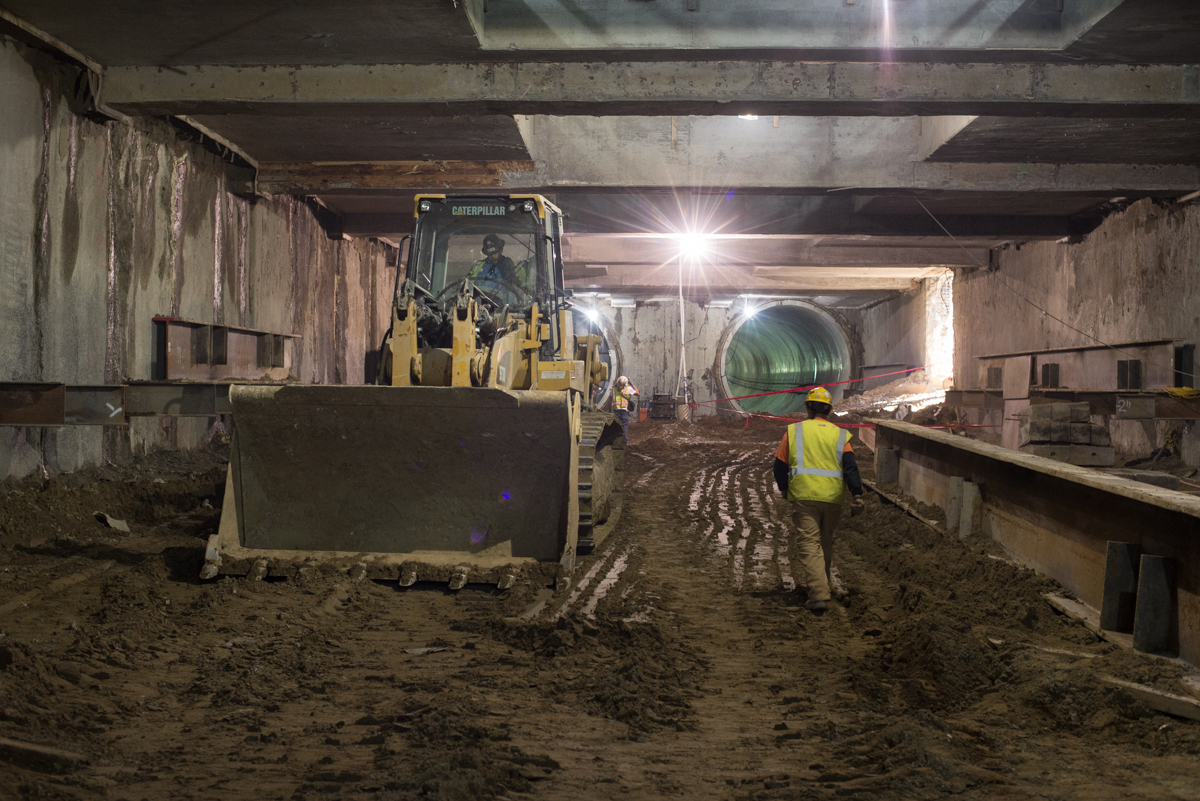 Temporary reinforcing steel has begun being installed inside the station box at the platform level. Yerba Buena | Moscone Station

Excavation of the Yerba Buena/Moscone Station underneath 4th Street between Folsom and Clementina continues.  The current traffic configuration from north of the station to Howard Street will remain.  Excavation continues at the station platform level. 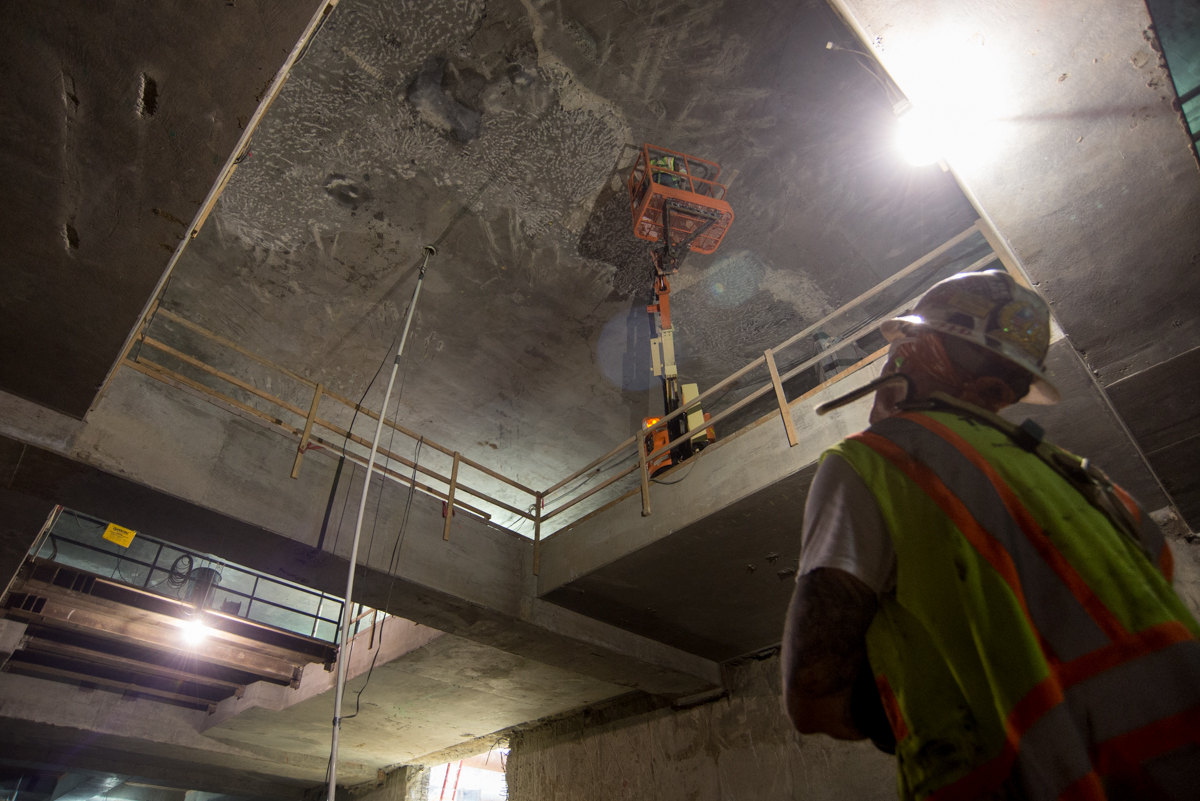 A small jackhammer is used to smooth the ceiling slab of the mezzanine level while a worker maintains a safe perimeter below. 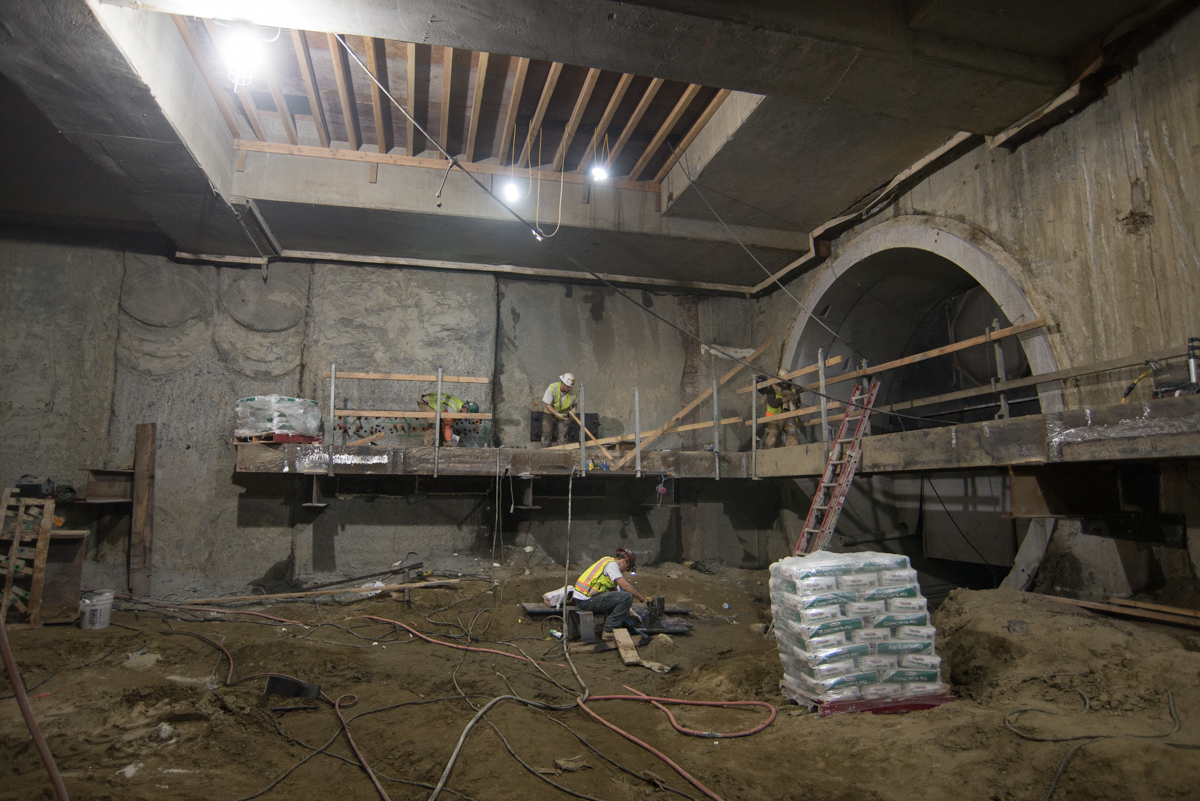 A crew installs safety railings on temporarily steel reinforcing beams at the north end of the station box. Overview

What: Roadway restoration on the east side of 4th Street south of Howard
Time:  7a.m.- 4p.m.
When: Monday to Friday
Where: 4th Street between Howard Street and Folsom Street What to expect 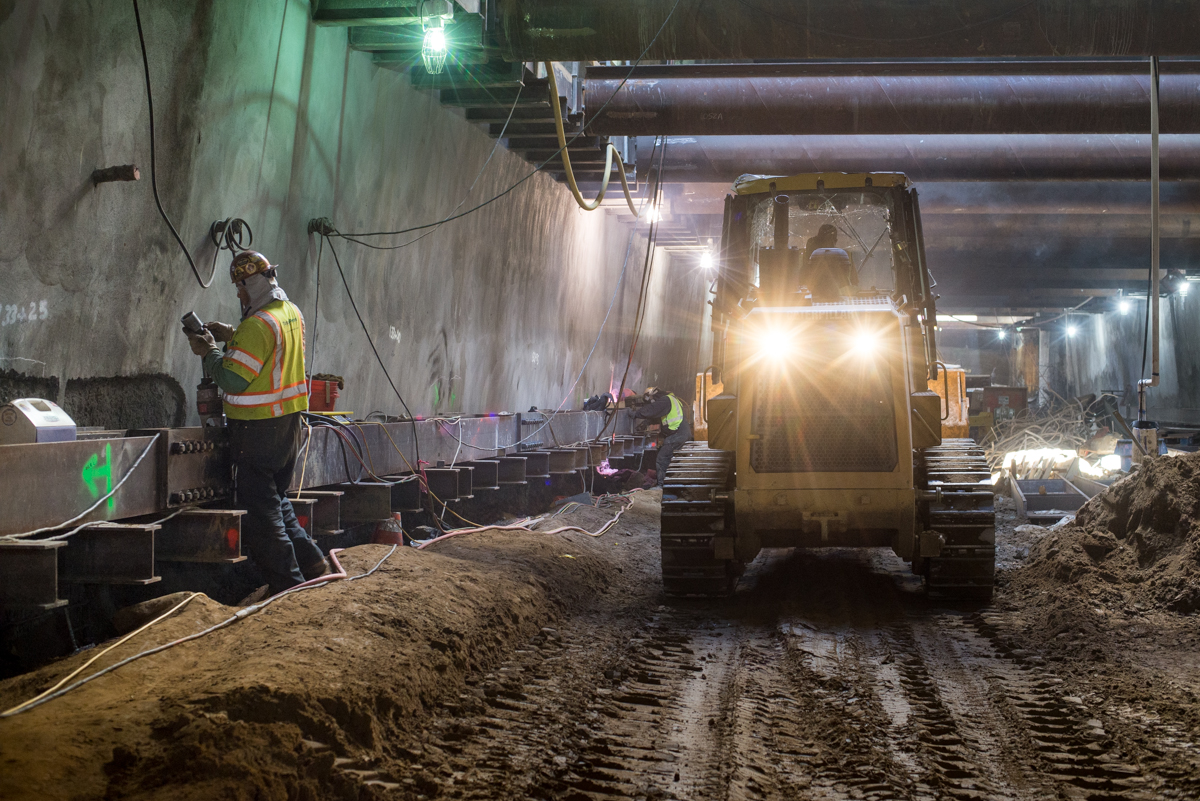 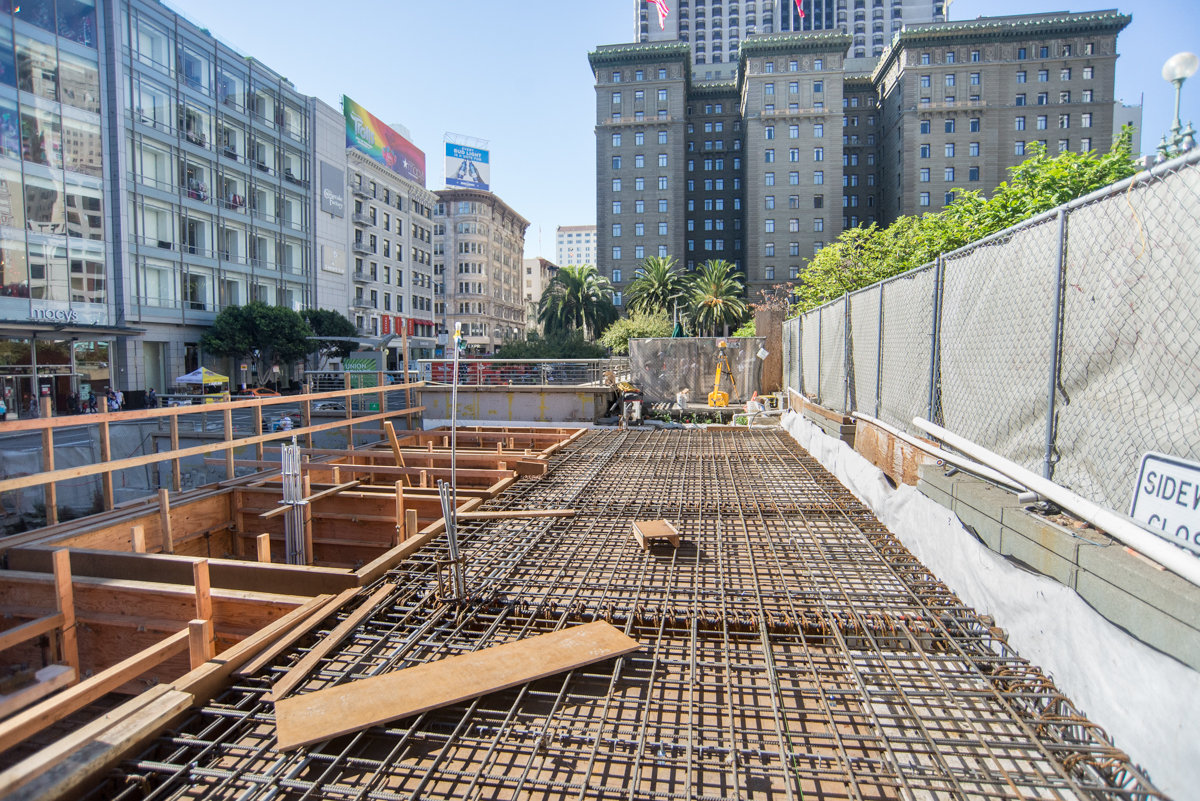 Rebar is being installed along with concrete forms at the north station entrance work site. 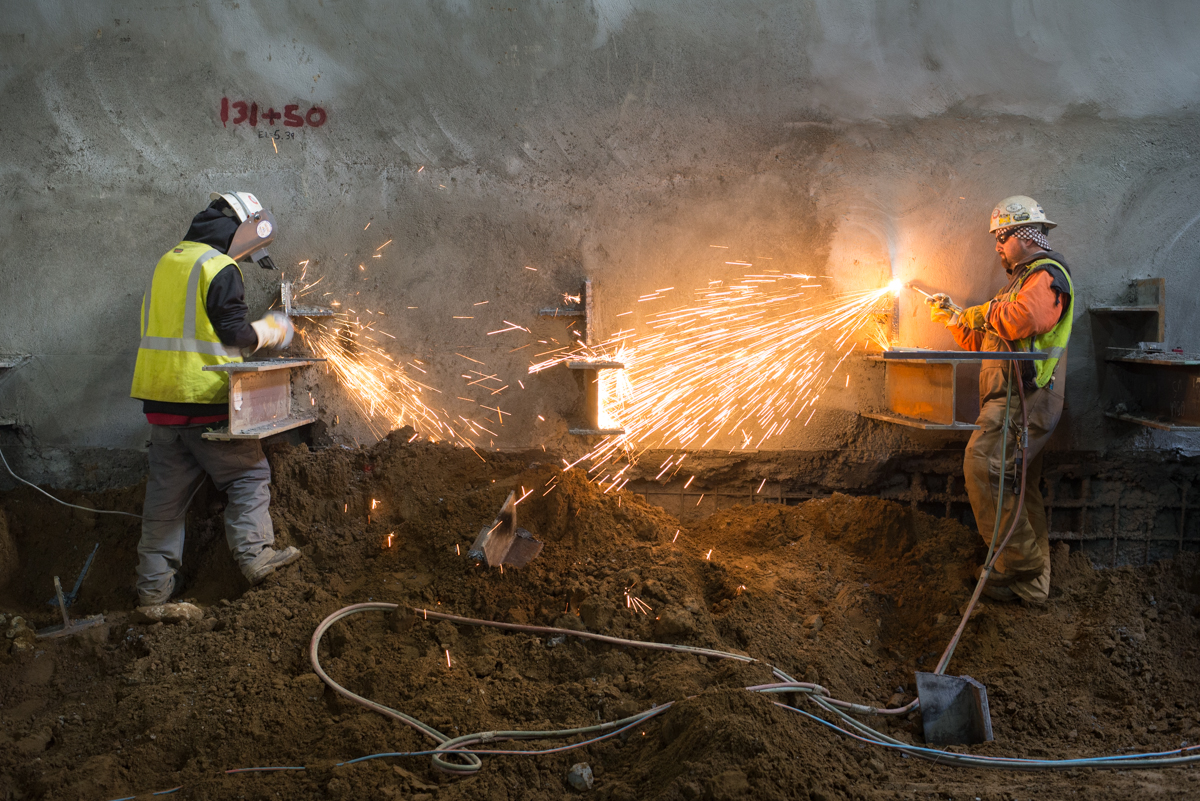 Workers use cutting torches to adjust the length of brackets used on the outer walls of the station. Overview 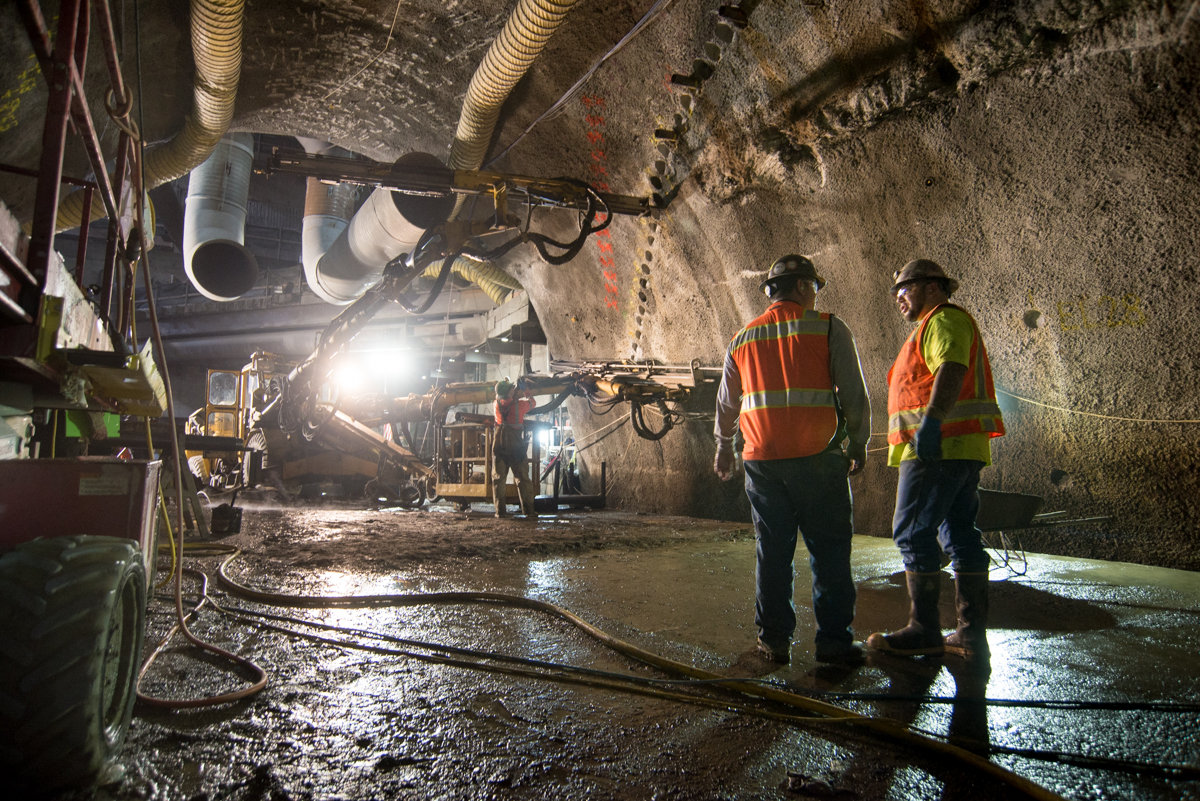 Crews are now drilling for soil improvement work ahead of excavating the station cavern. Chinatown Station The construction of an underground Chinatown Station uses the sequential excavation method (SEM) along Washington Street and Stockton Street. The SEM provides a high degree of flexibility during construction and makes it possible to control virtually all kinds of ground conditions, thereby greatly reducing the risks of construction. This method of tunnel construction is used worldwide for small to large openings in a variety of ground types ranging from rock to soil. 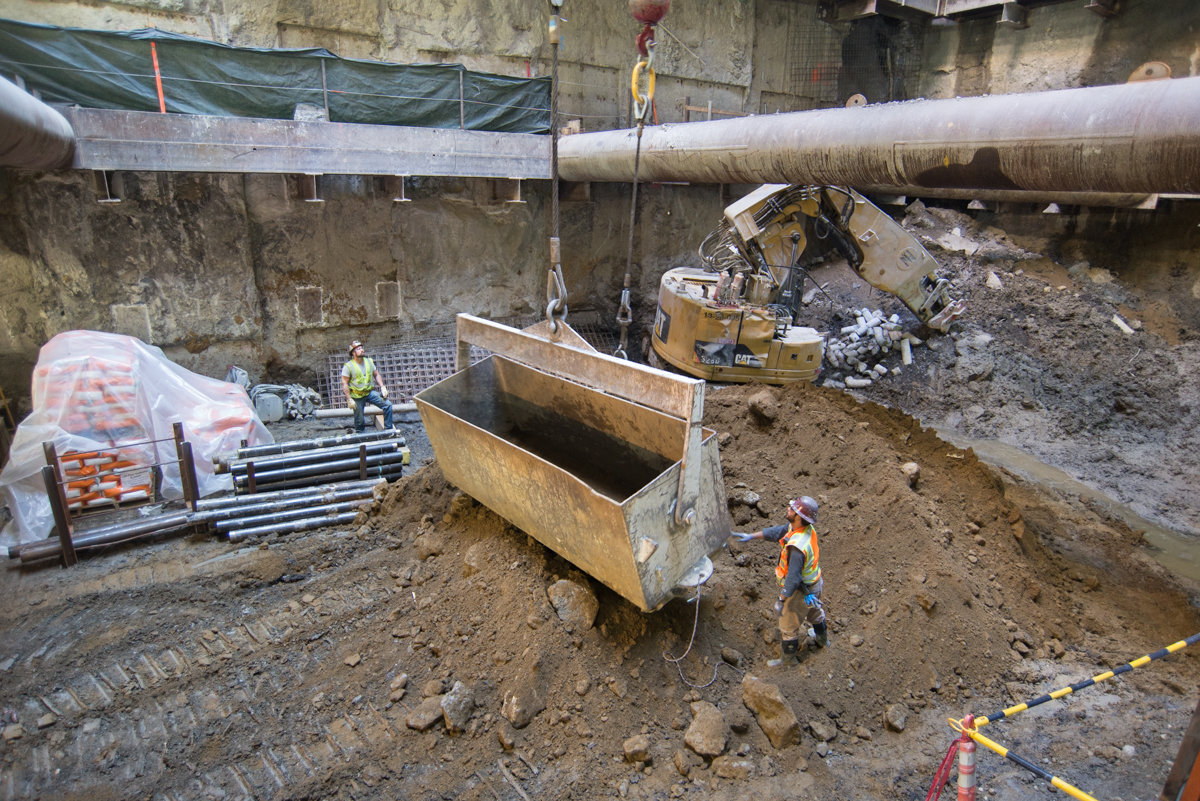 A large steel bucket is used to carry material to and from the surface. 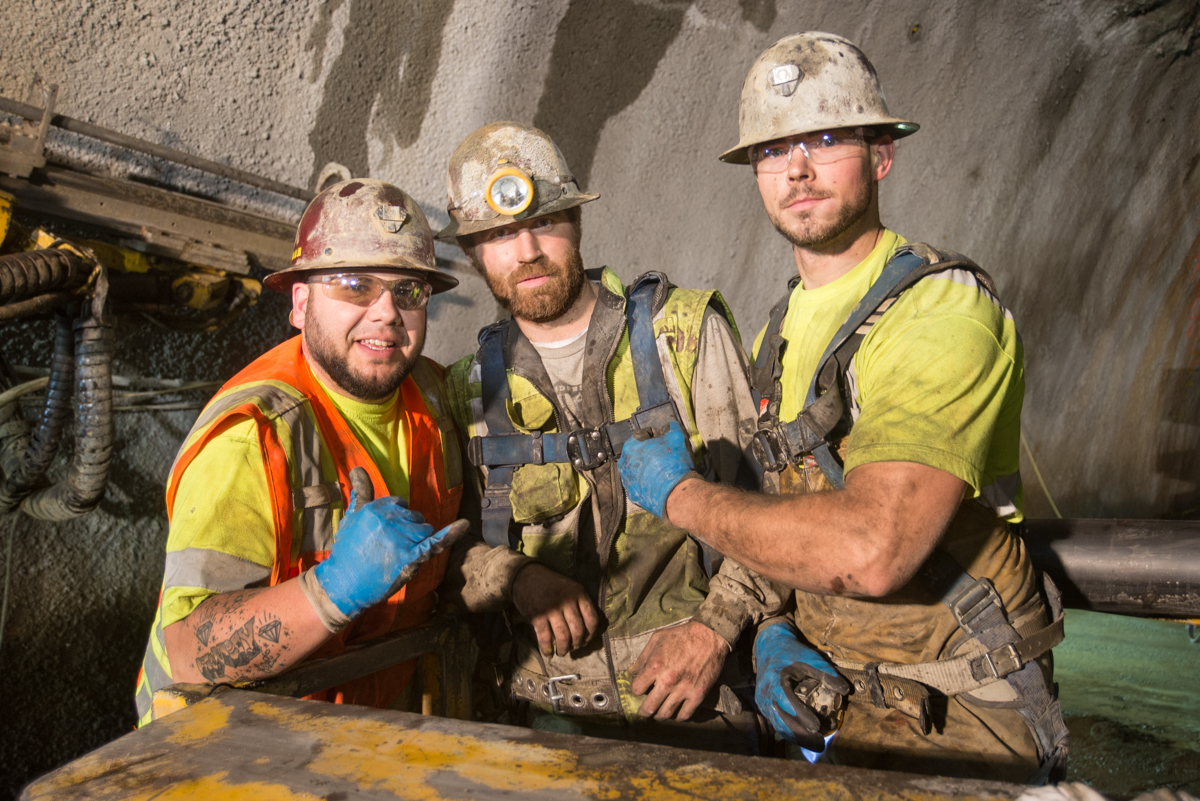 Workers inside the cross-cut cavern take a moment to pose for the camera. Overview