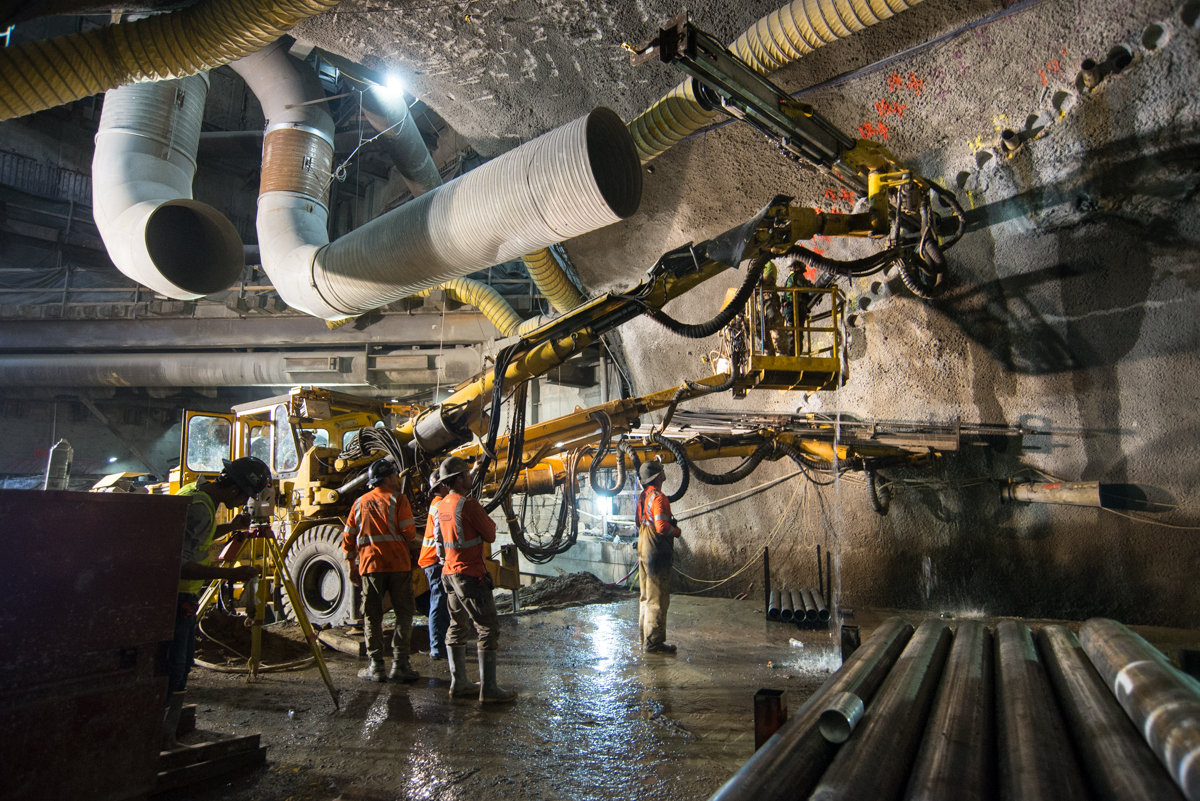 Multiple arms stretch from the drill rig stationed at the Chinatown Station cross-cut cavern entrance, where drill casings are ready to be installed during soil grouting. Central Subway | Project Advancement 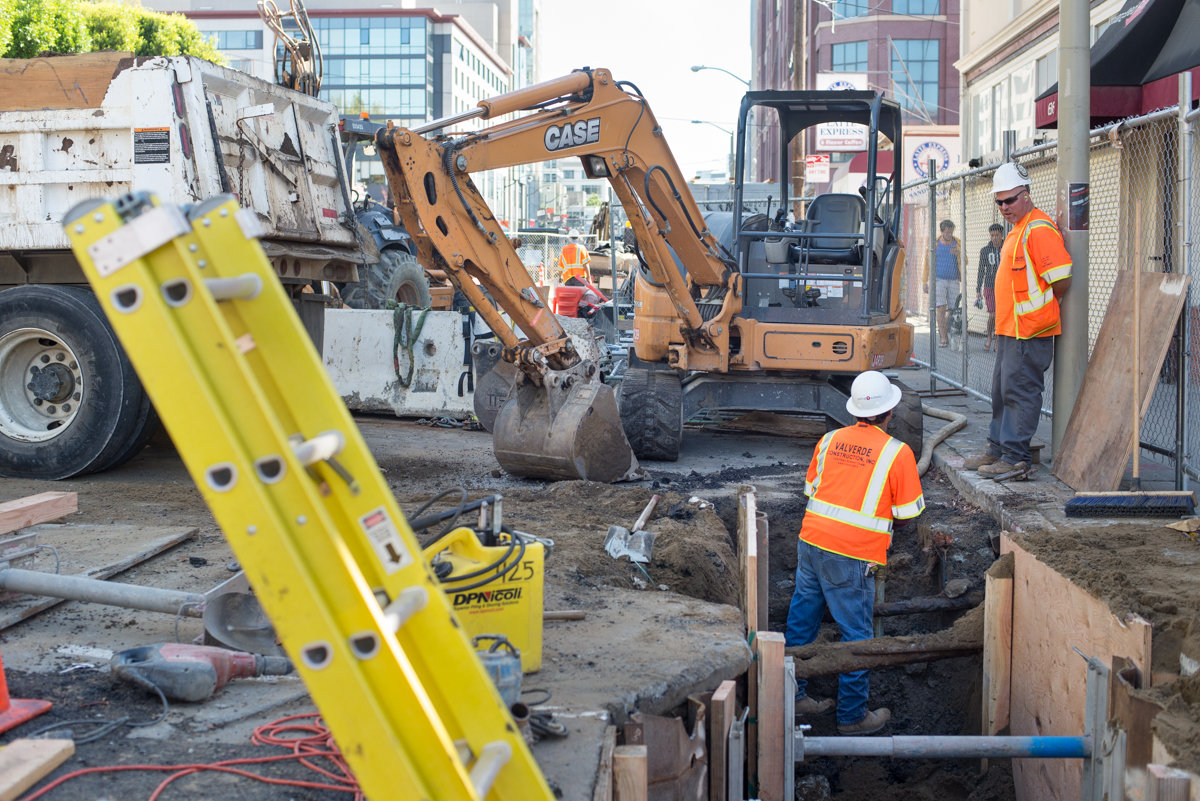 Night work is ongoing on 4th Street between Bryant and King Streets, between 8:00 PM and 5:00 AM.  Utility installation and upgrade work continues along 4th Street between Bryant and King, and regular day shift hours are from 7am to 4pm.  The bus stop at the NE corner of 4th and Townsend will temporarily be relocated 140 feet to the east until November 18. 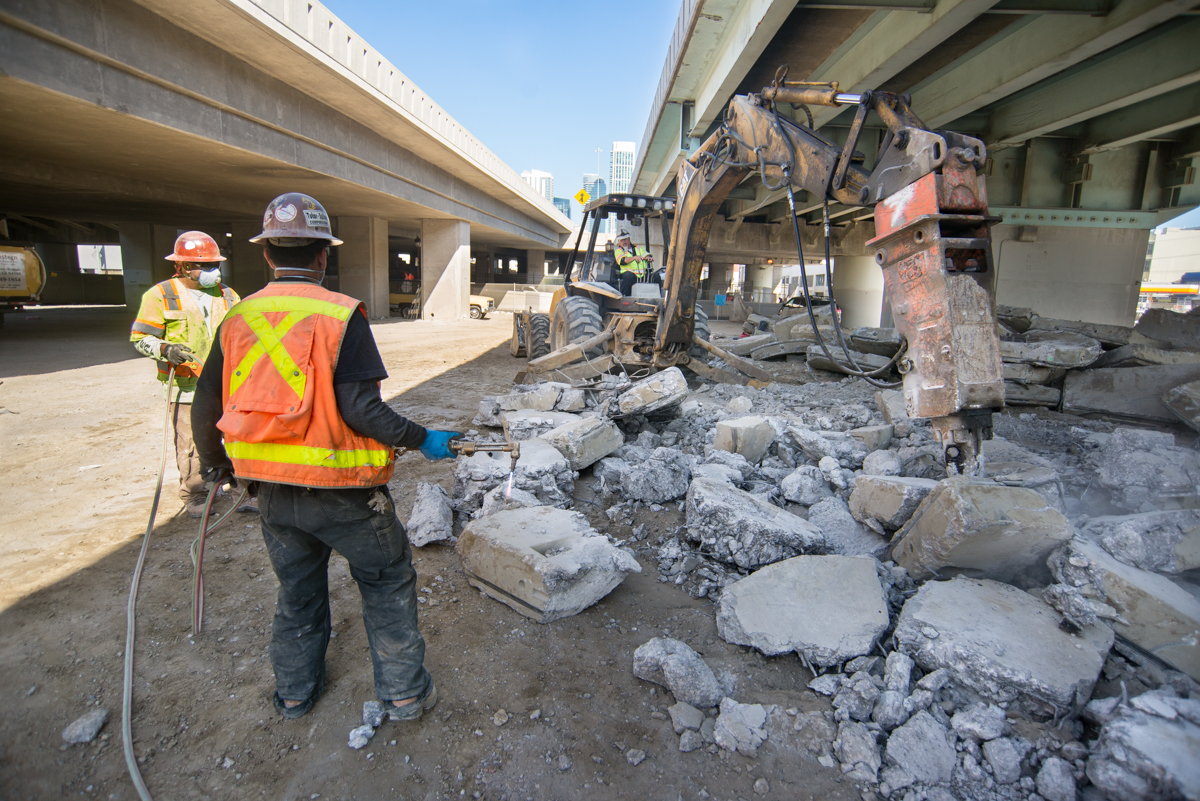 Workers use a jackhammer and cutting torch to split apart sections of unneeded tunnel segments. 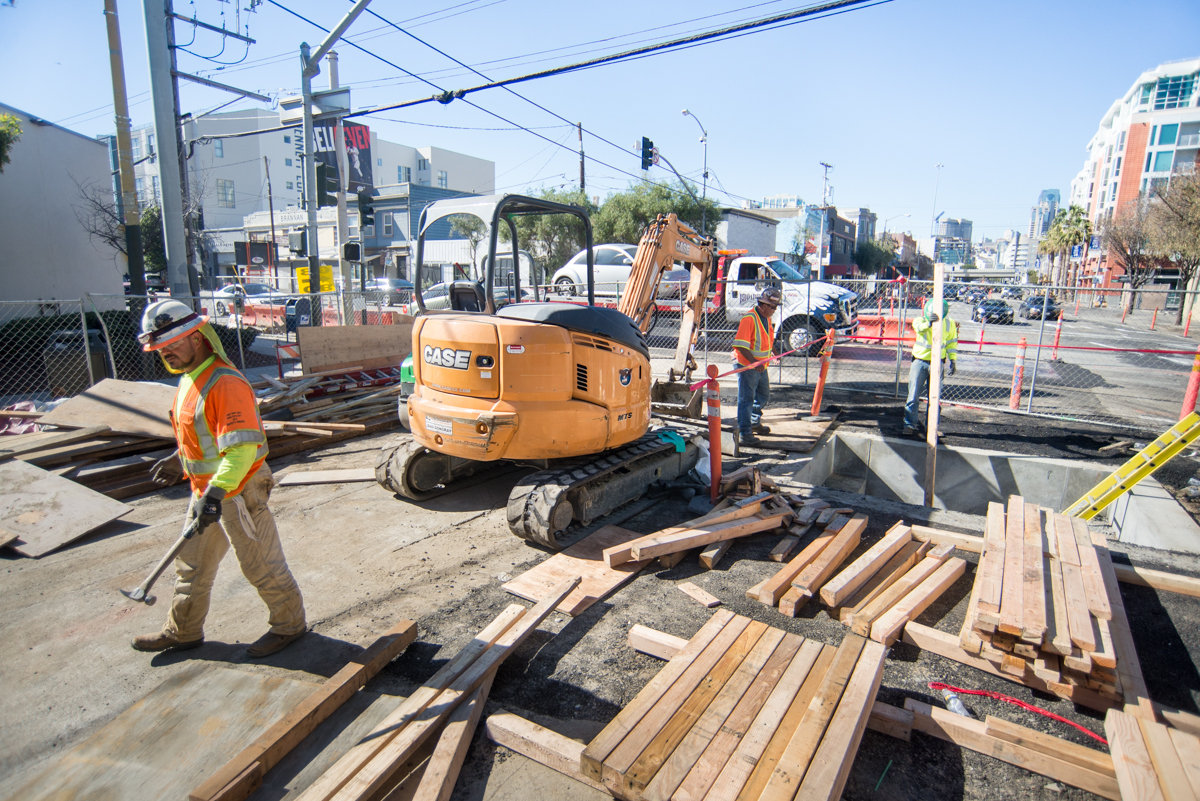 What: Pavement renovation
Time: 7 a.m. - 5:30 p.m.
When: Monday to Saturday
Where: 4th Street between King and Bluxome 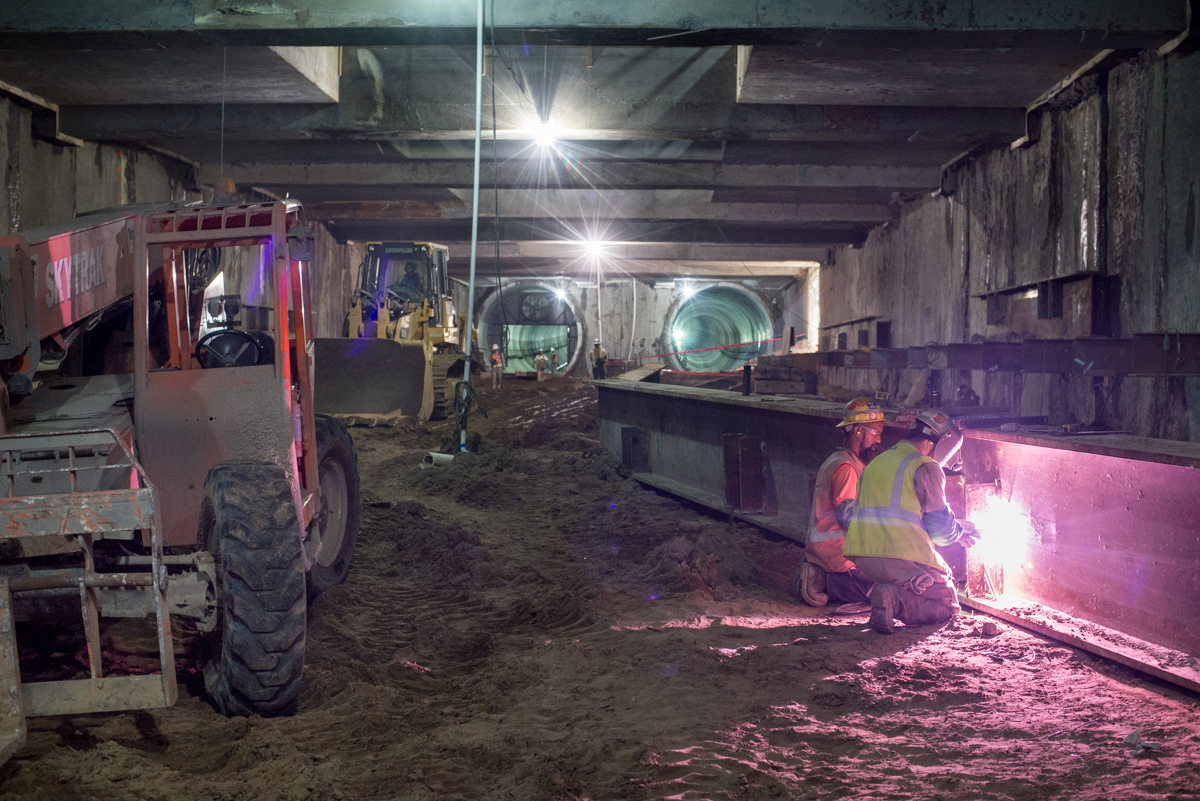 Excavation of the Yerba Buena/Moscone Station underneath 4th Street between Folsom and Clementina continues.  The current traffic configuration from north of the station to Howard Street will remain.  Excavation and installation of temporary bracing continues at the station platform level. 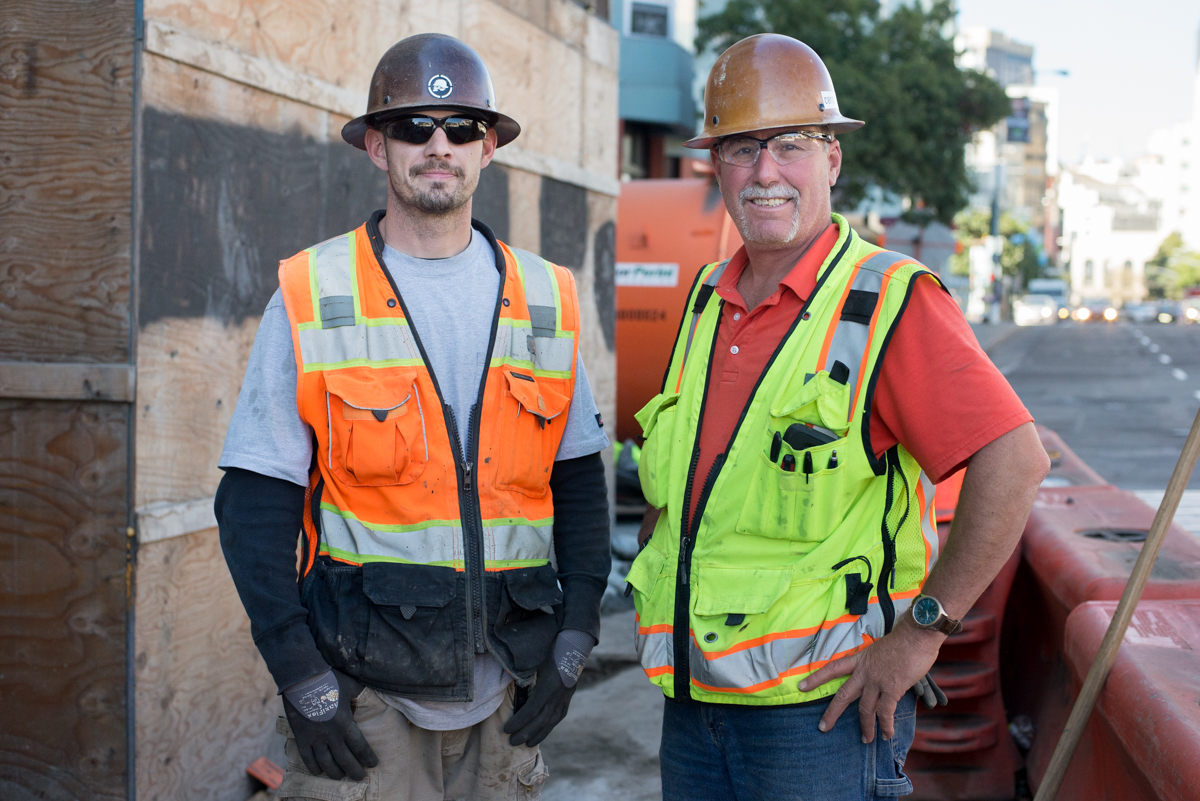 Two workers pose for the camera following a concrete pour for an emergency exit stairwell. 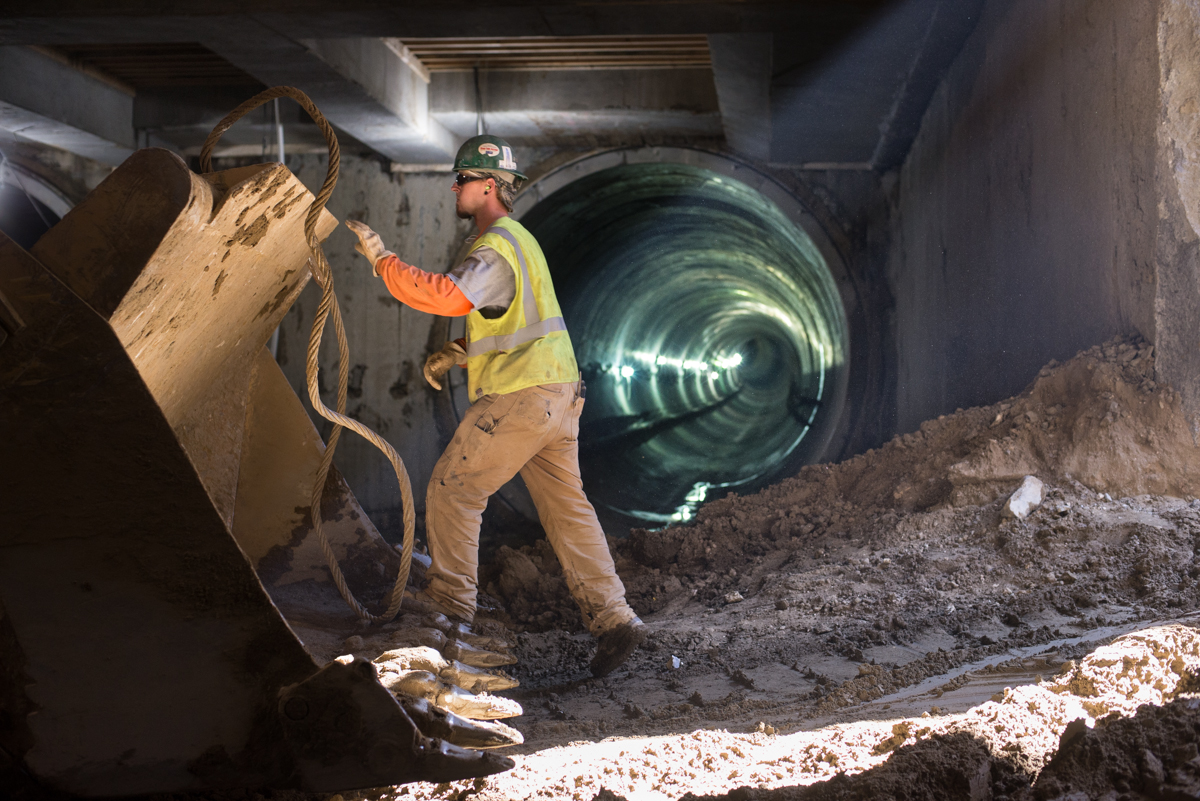 A worker rigs a bulldozer to lift heavy steel beams near the entrance portal to the station box. Overview

What: Excavation of the headhouse and station box and installation of temporary bracing
Time:  7a.m - 7p.m.
When: Monday to Friday
Where: 4th Street between Howard Street and Folsom Street

What: Roadway restoration on the east side of 4th Street south of Howard
Time:  7a.m.- 4p.m.
When: Monday to Friday
Where: 4th Street between Howard Street and Folsom Street What to expect 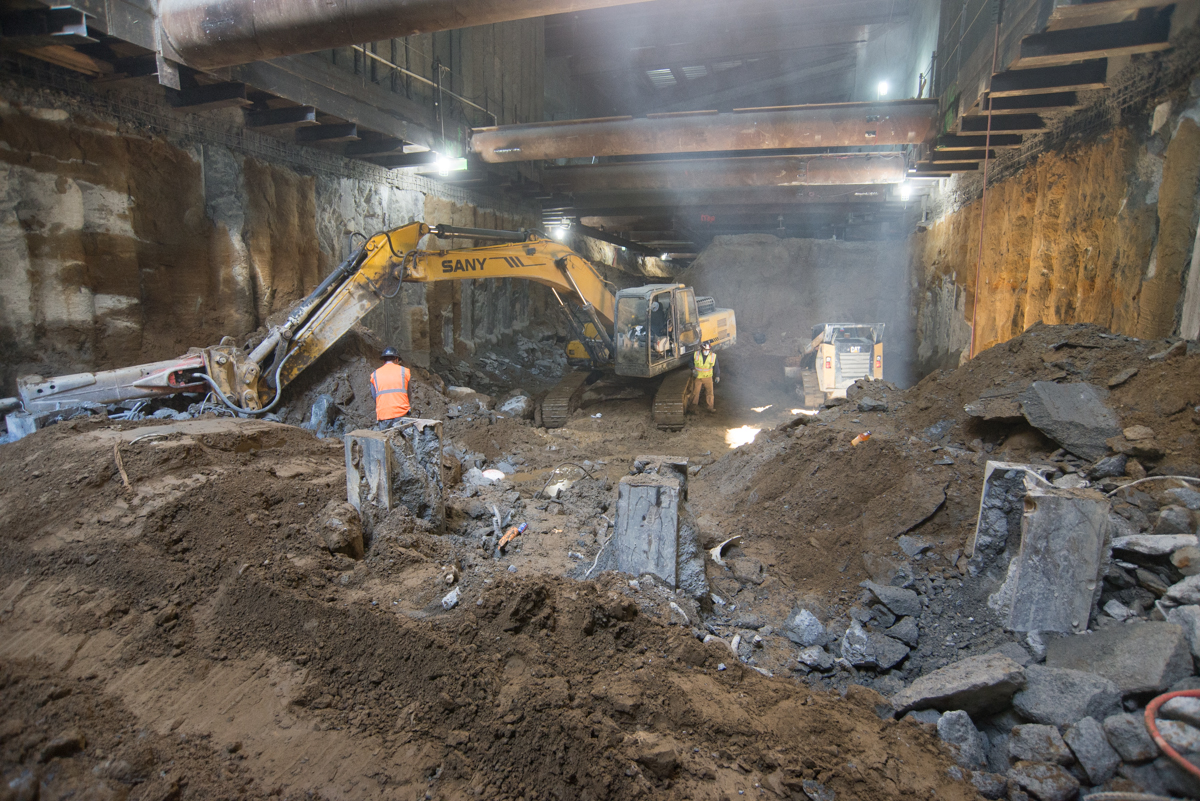 Workers finish work to excavate a portion of the north concourse just under the Stockton and Geary Intersection. Union Square | Market Street Station

The installation of a utility pole has begun at Ellis and Stockton.  Installation of waterproofing and concrete on the plaza level of the Union Square Garage continues.  There will be an increase in vehicles and activities as work at the southeast corner of Union Square ramps up.  Night work at the Stockton and O'Farrell intersection will reduce O'Farrell to one lane through the work area.  Current activities include station excavation and installation of temporary bracing under Stockton Street as well as on O'Farrell. 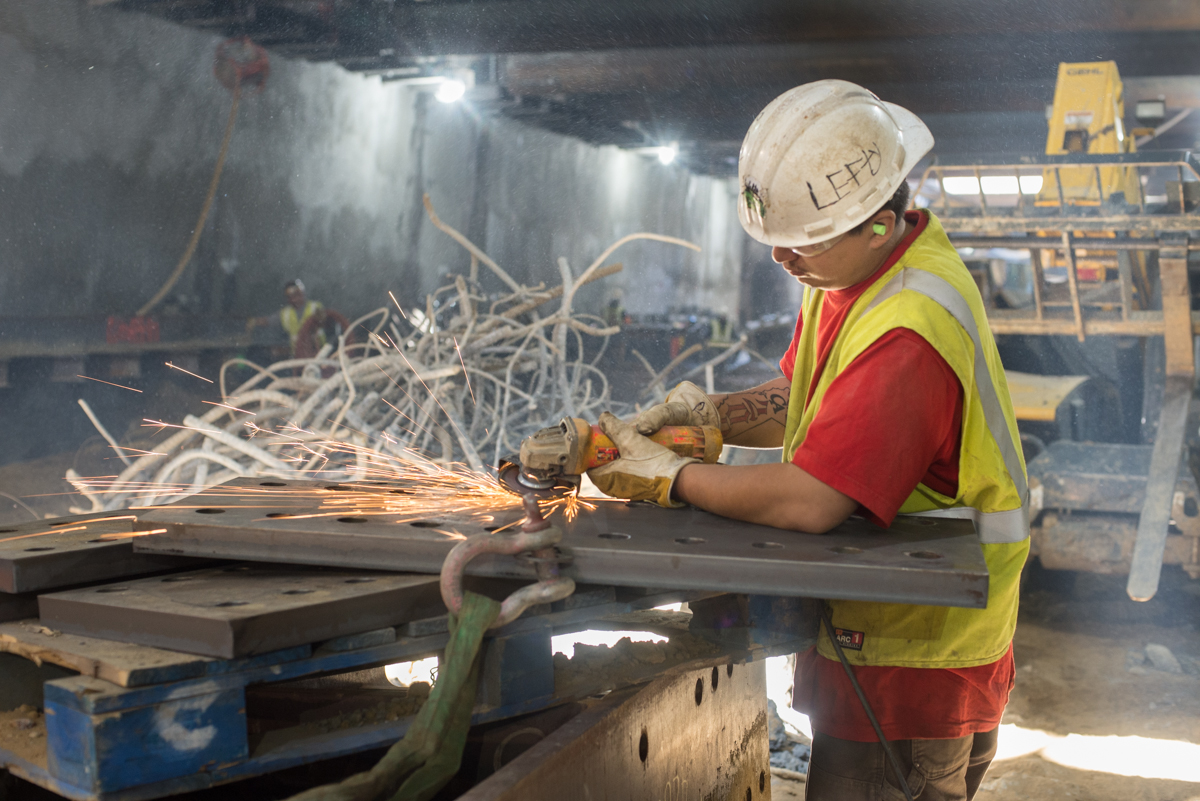 A large steel bracket is prepared to be installed as part of temporary bracing against the outer walls of the station during excavation. 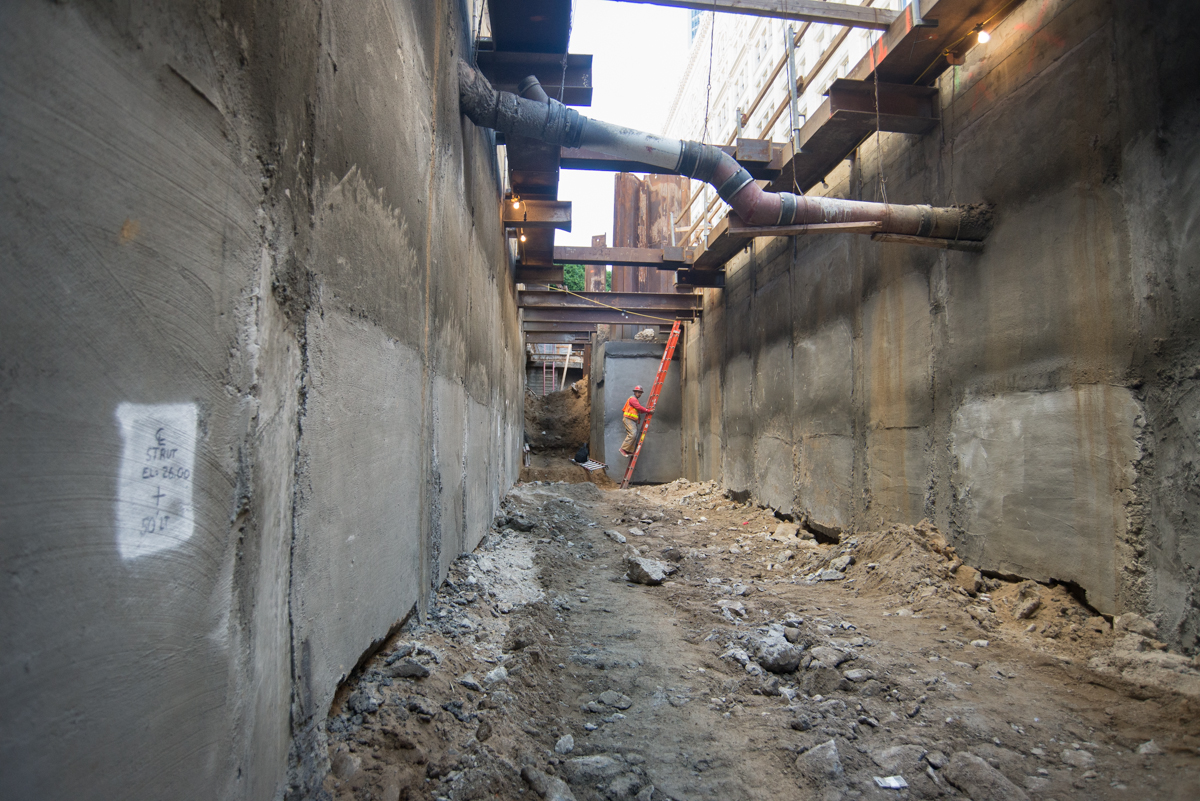 Temporary walls support the structure of a future emergency exit stairwell on O'Farrell during excavation. Overview 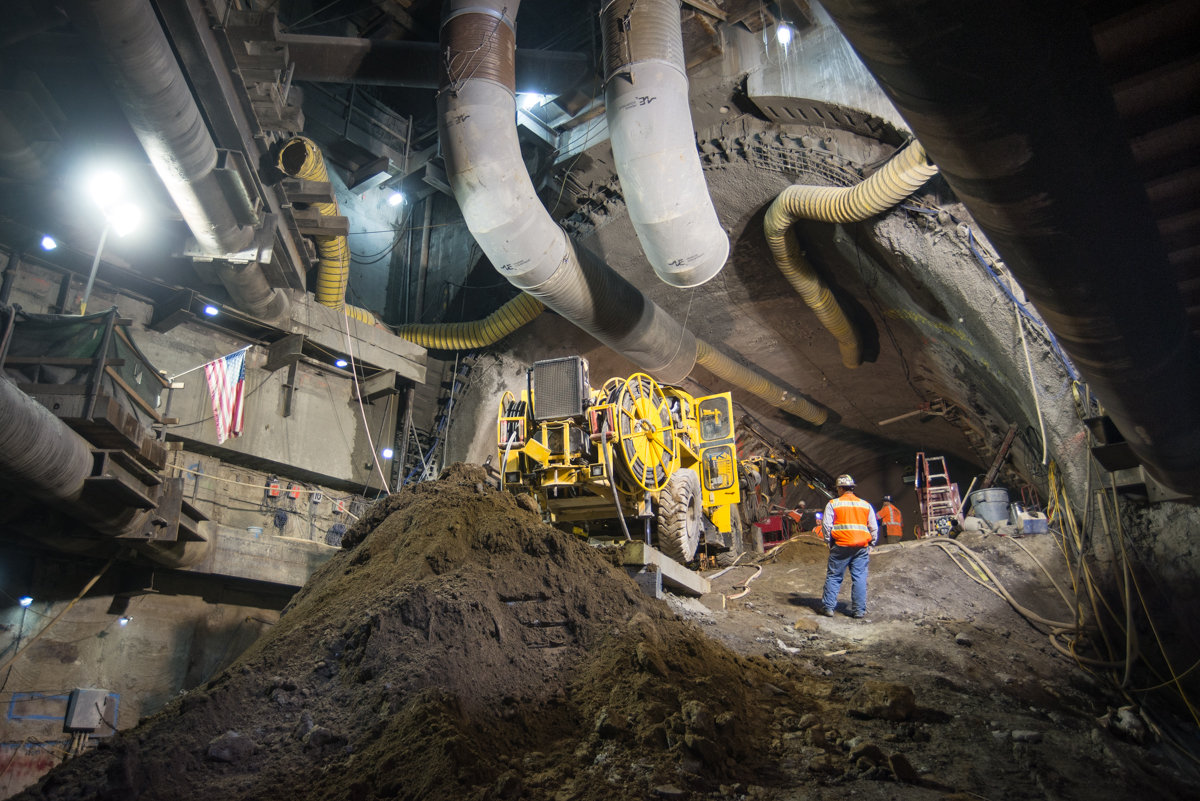 Workers have backfilled the approach to the cross-cut cavern to support heavy equipment during soil improvement operations. Chinatown Station The construction of an underground Chinatown Station uses the sequential excavation method (SEM) along Washington Street and Stockton Street. The SEM provides a high degree of flexibility during construction and makes it possible to control virtually all kinds of ground conditions, thereby greatly reducing the risks of construction. This method of tunnel construction is used worldwide for small to large openings in a variety of ground types ranging from rock to soil. 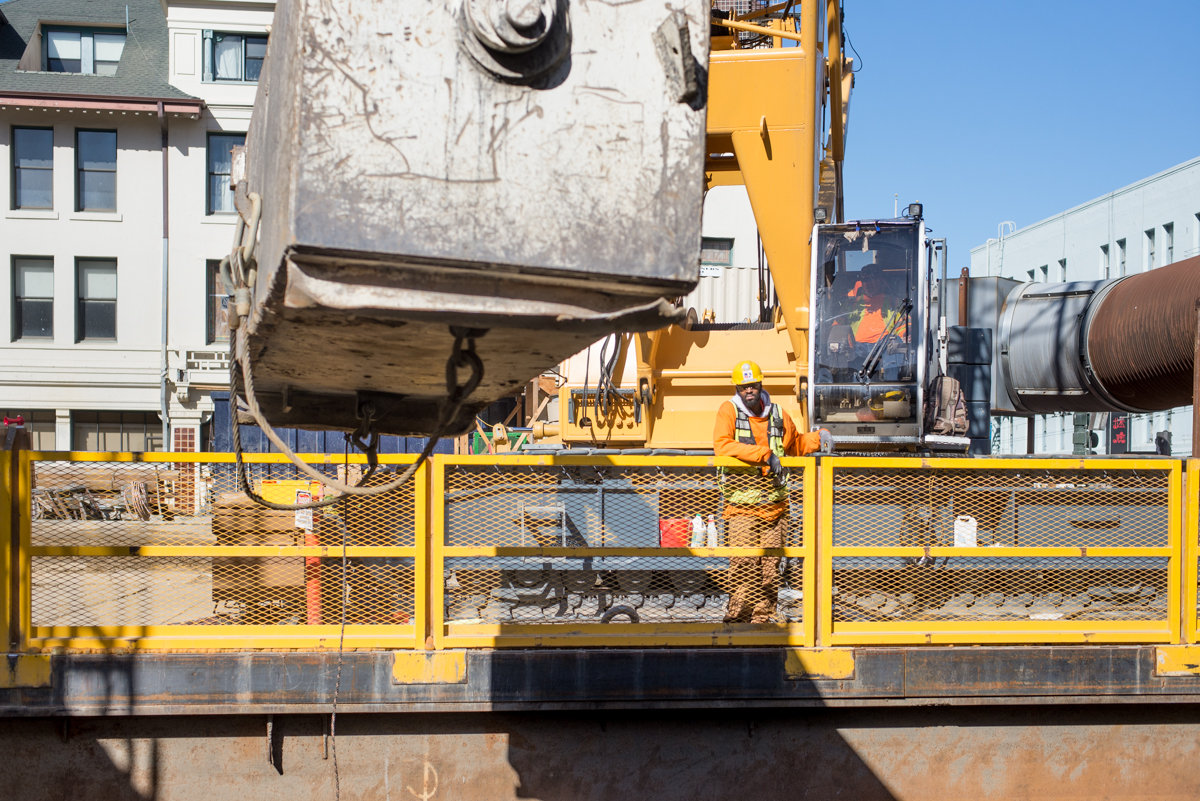 A flagger keeps his eye on the large steel bucket used to bring material to and from the station headhouse interior. 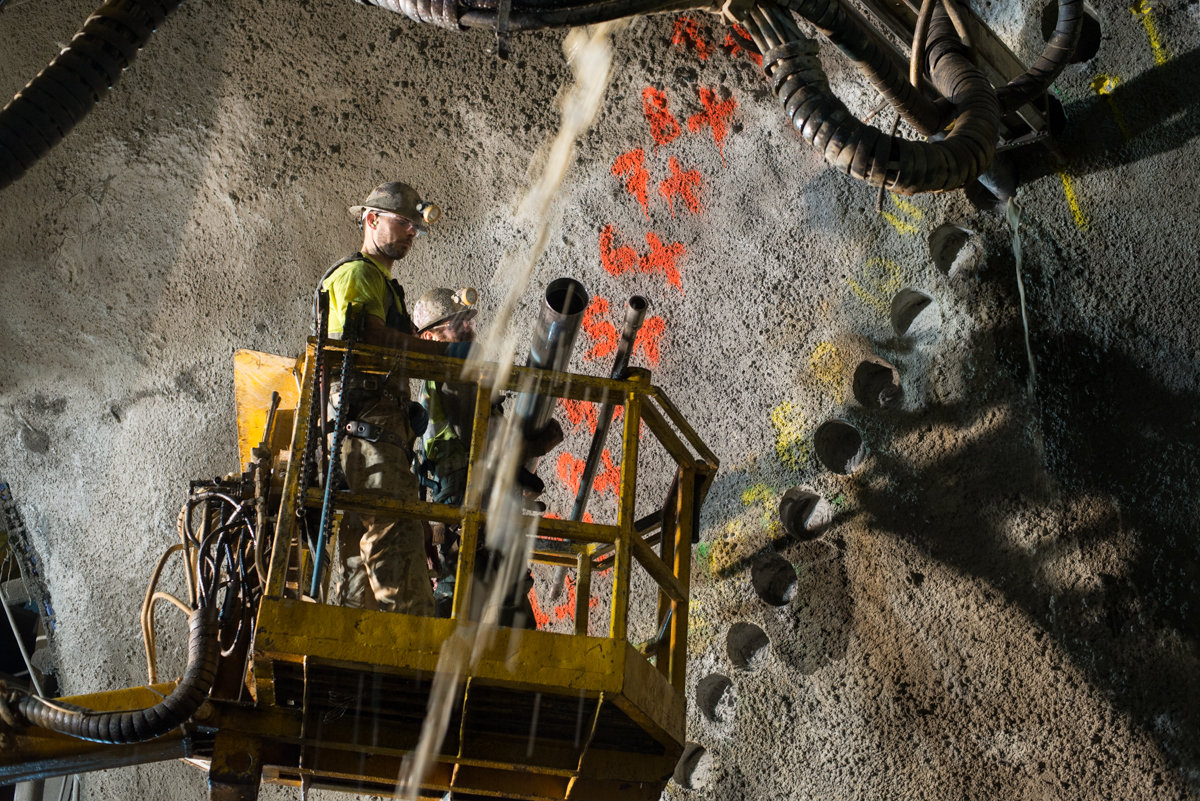 A row of pilot holes marks the future roof arch of the station cavern inside the cross-cut cavern. Overview