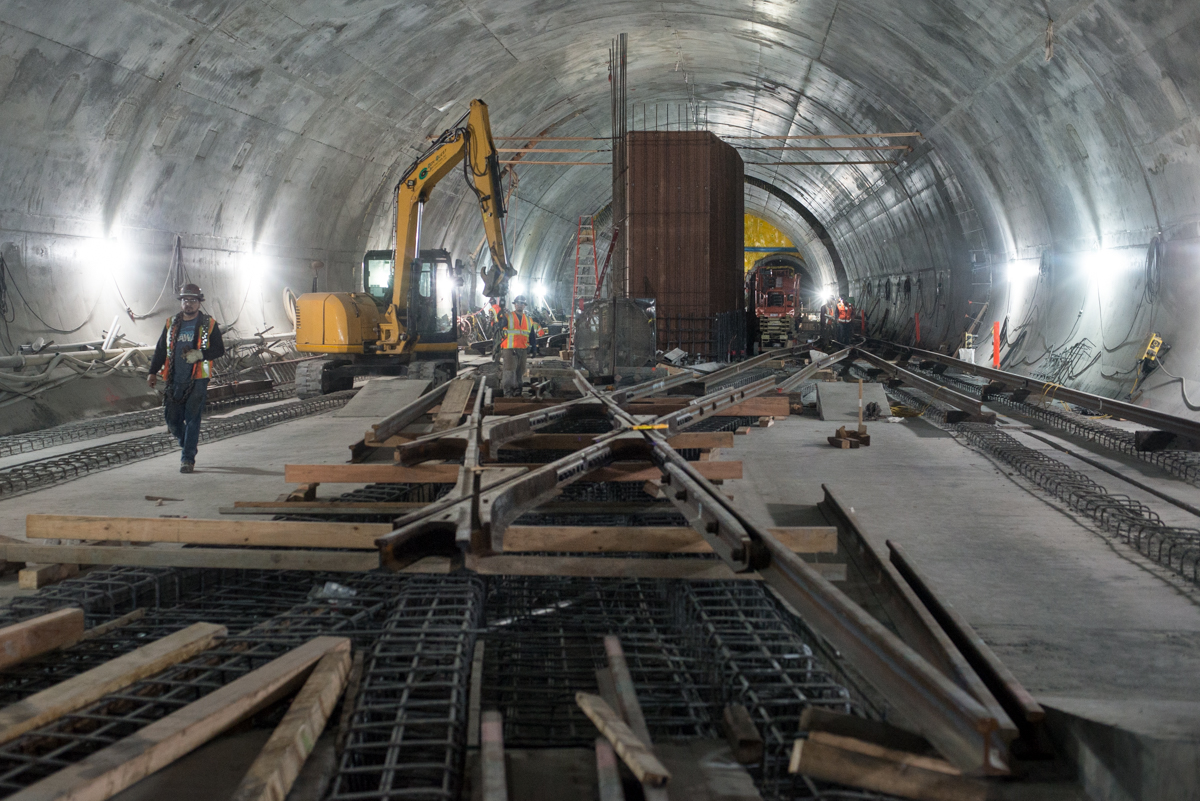 A future track configuration takes shape inside the Chinatown track crossover cavern as sections of rail are roughly placed on cribbing blocks before foundations are constructed in place. Central Subway | Project Advancement 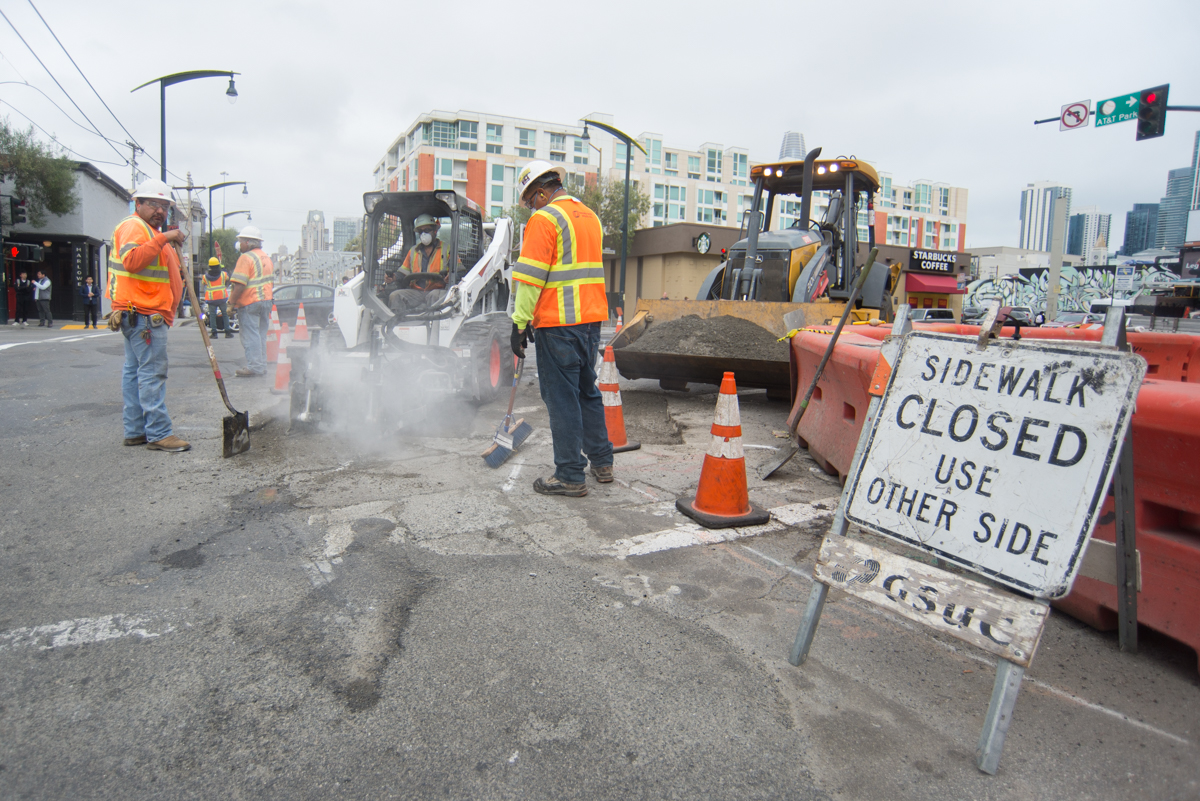 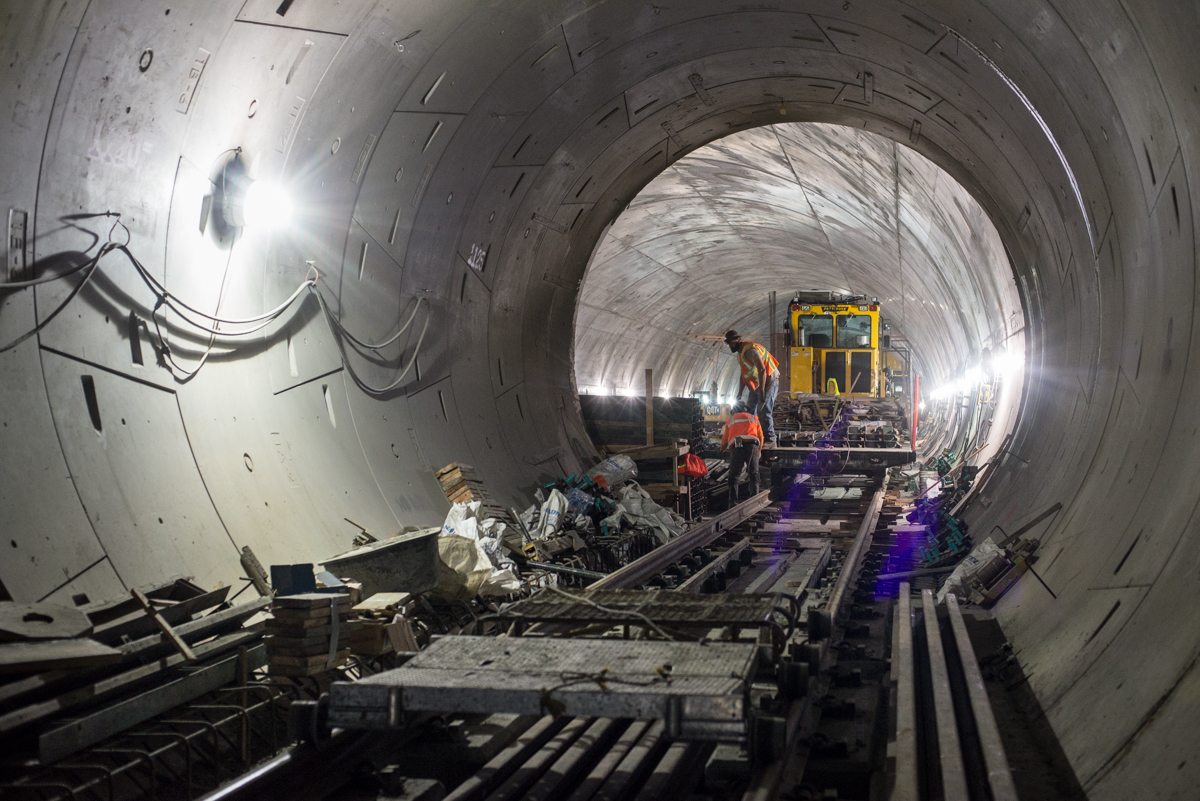 A crew unloads concrete forms used to build track foundations where the northbound tunnel opens up into the track crossover cavern. 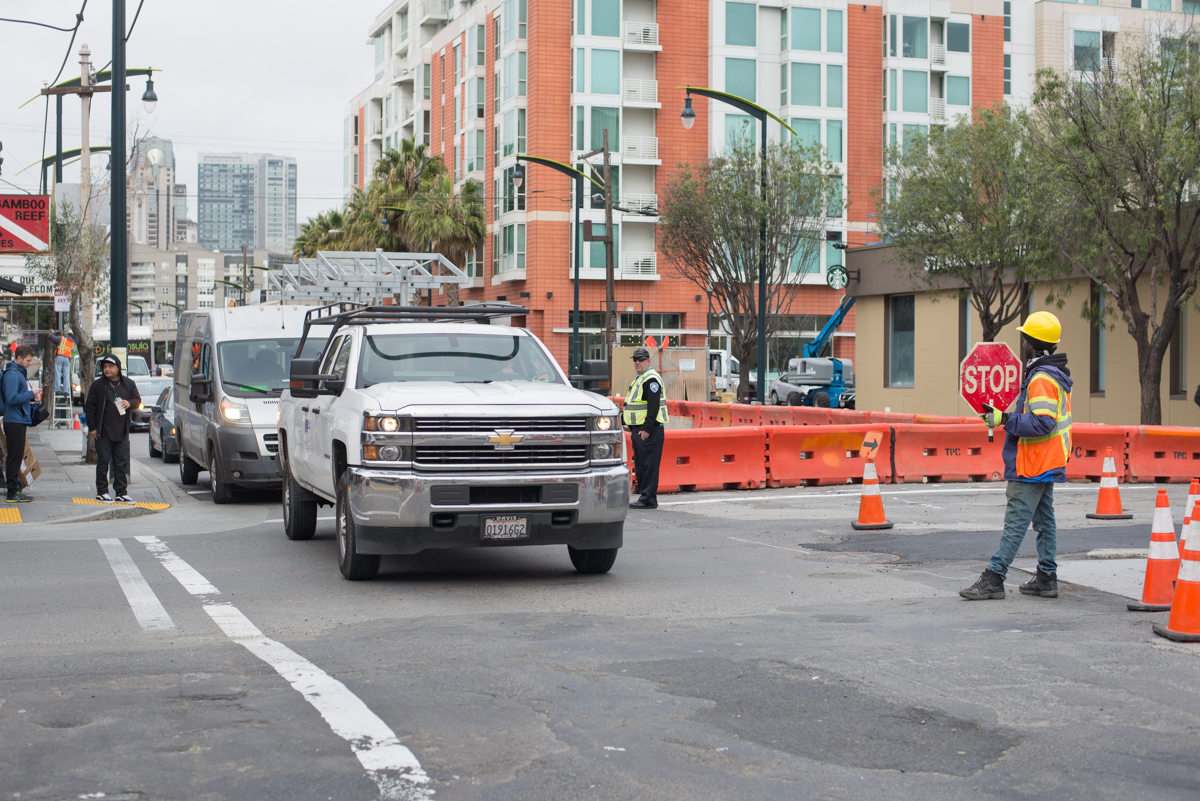 A flagger and PCO assist vehicles to maintain safe and efficient pedestrian and vehicle flow through the 4th and Brannan intersection. Overview 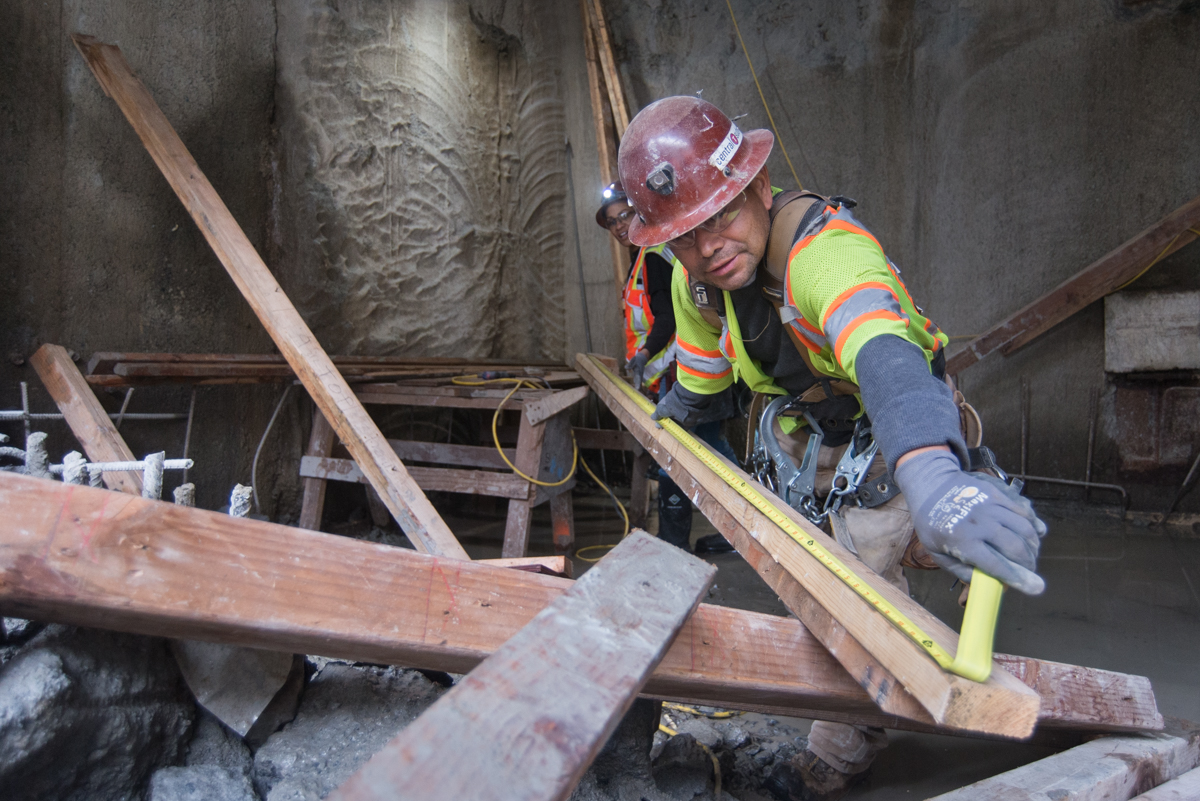 Carpenters sort wood left from concrete forms and shoring inside the bottom of a future ventilation structure on the west side of the Yerba Buena/Moscone Station headhouse. Yerba Buena | Moscone Station 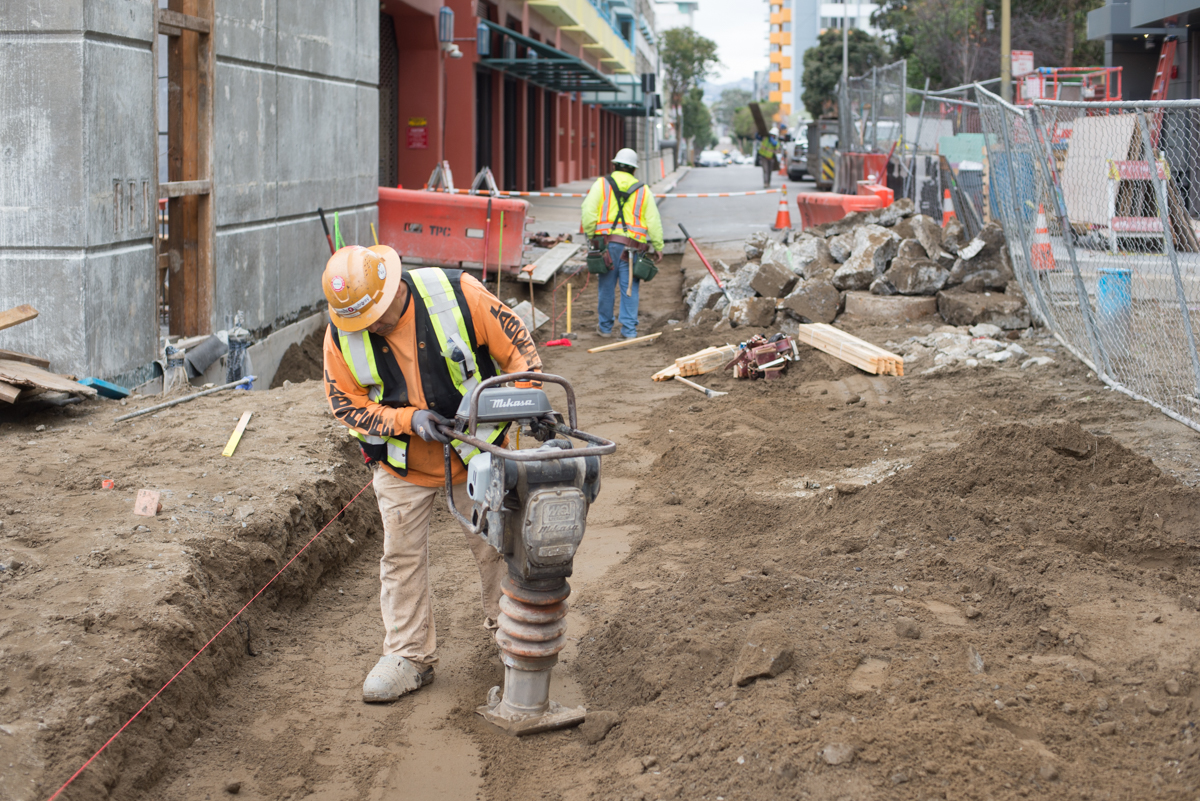 Clementina has partially been backfilled ahead of work to prepare for the restoration of this portion of the street through to 4th. 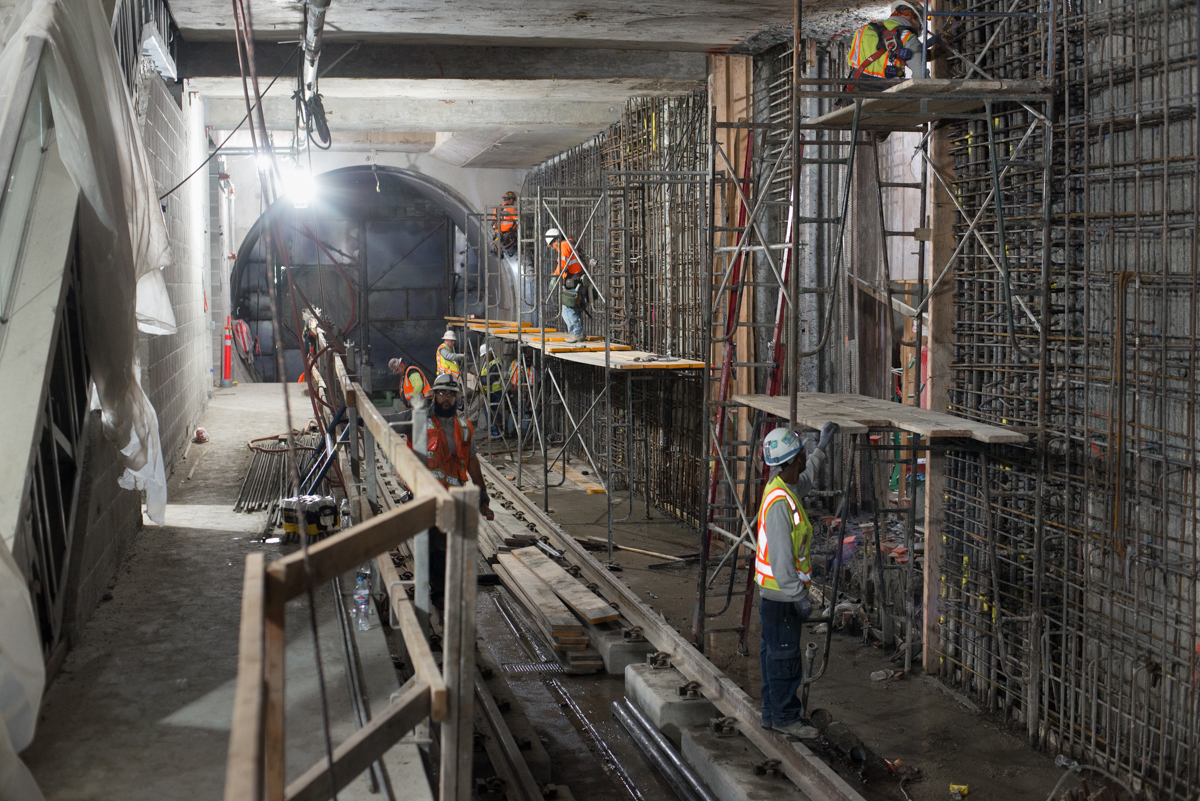 Scaffolding is being disassembled following the completion of most rebar installation work on this portion of the west side station platform wall. Overview 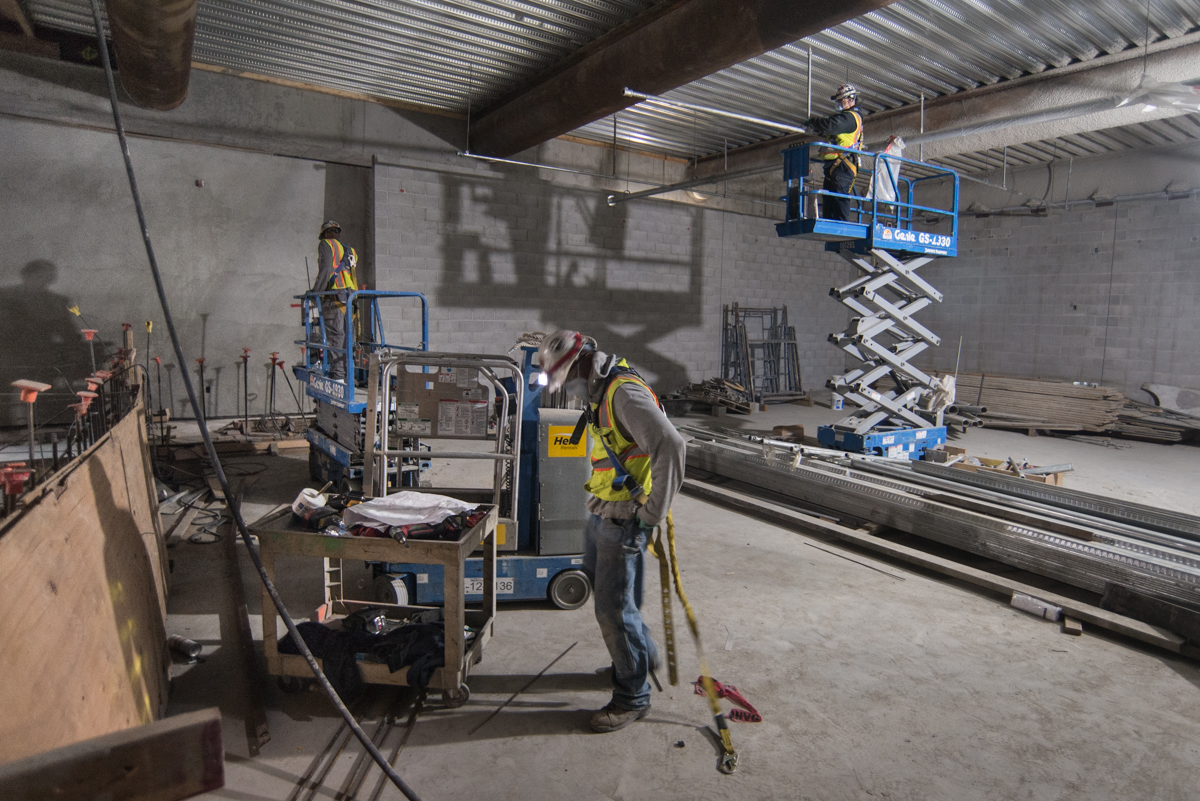 Interior elements such as cinderblock walls and fire suppression systems are being installed on the mezzanine level of the station box. Union Square | Market Street Station

One lane on the south side of Ellis Street is open at all times for eastbound traffic.  Parking garage access is open on north side of Ellis Street.  Roadway restoration work has been completed to allow for the 2018 Winter Walk.  The installation of waterproofing, structural steel, and concrete at the southeast corner of the Union Square Garage continues.  There will be a continued presence of vehicles and equipment as work at this location continues.  Installation of internal structural elements and utilities is ongoing under Stockton Street as well as the northeast corner of Stockton and O'Farrell. 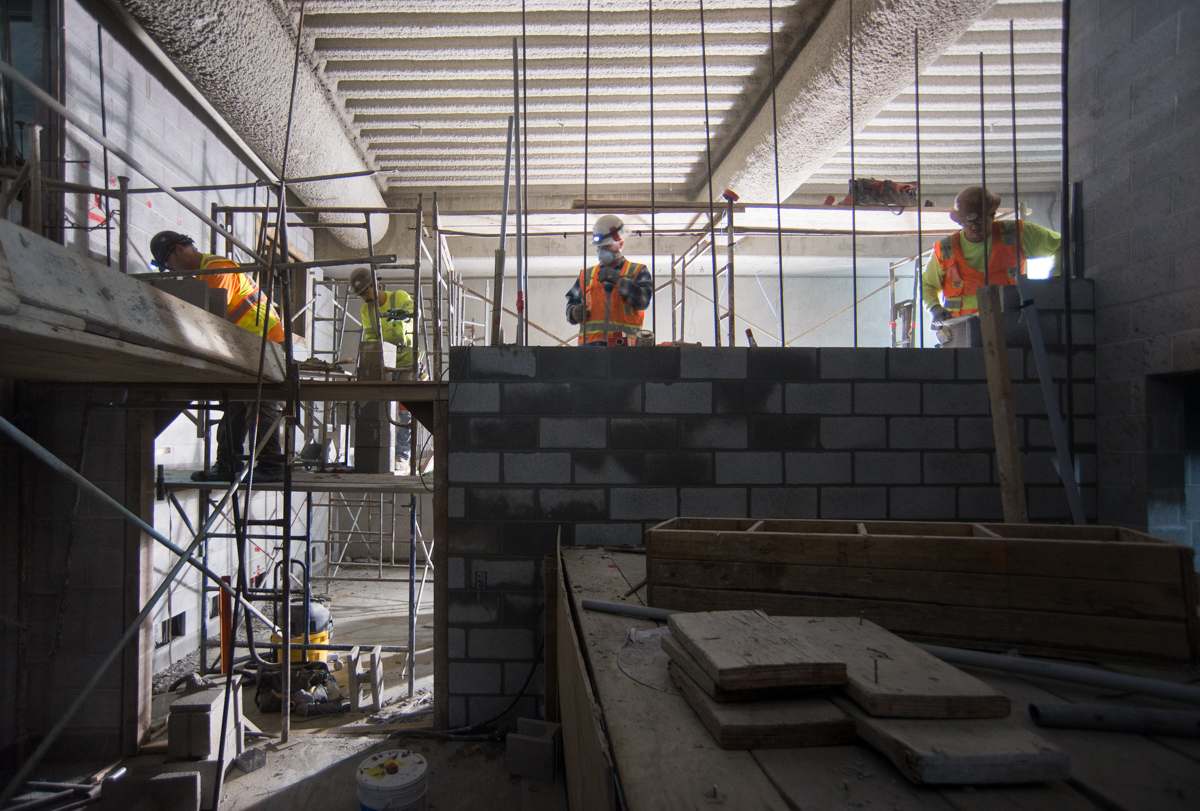 Workers construct a cinderblock wall on the west side of the mezzanine level, halfway down the length of the station box. 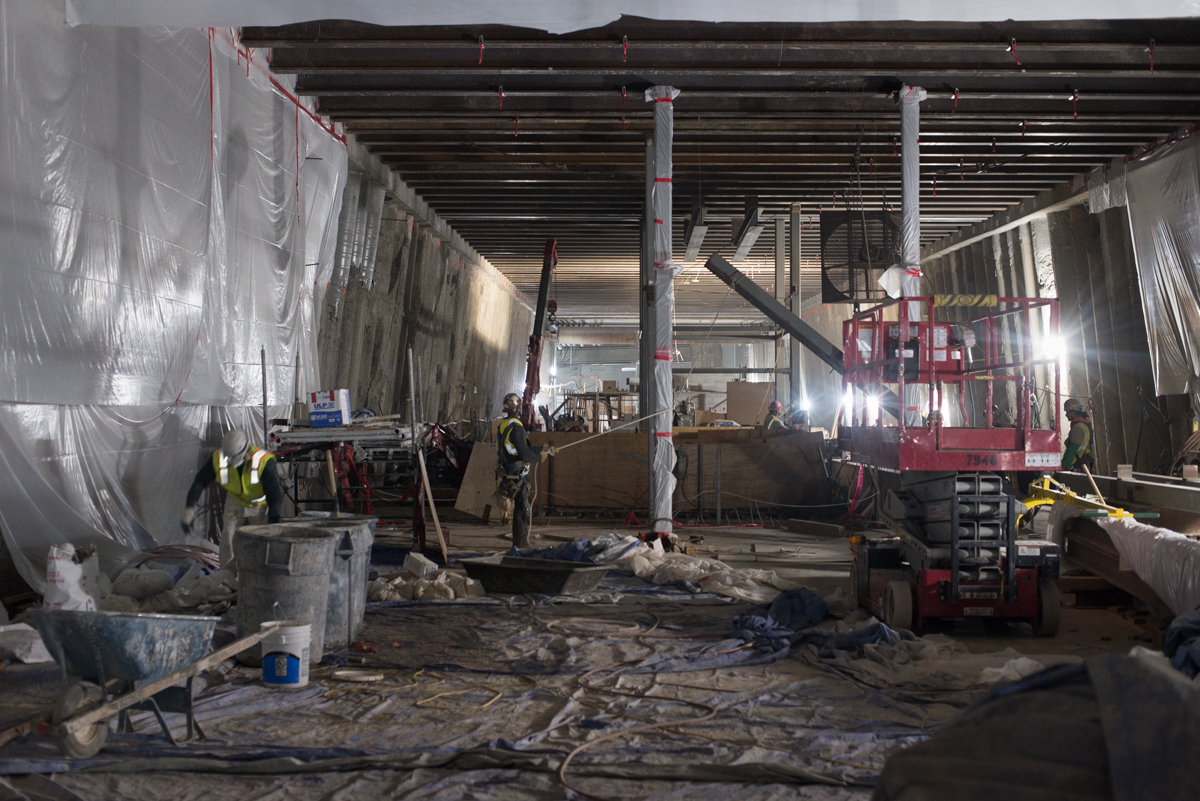 Steel beams used for bracing future interior structures are being installed in the middle of the concourse level for station. Overview 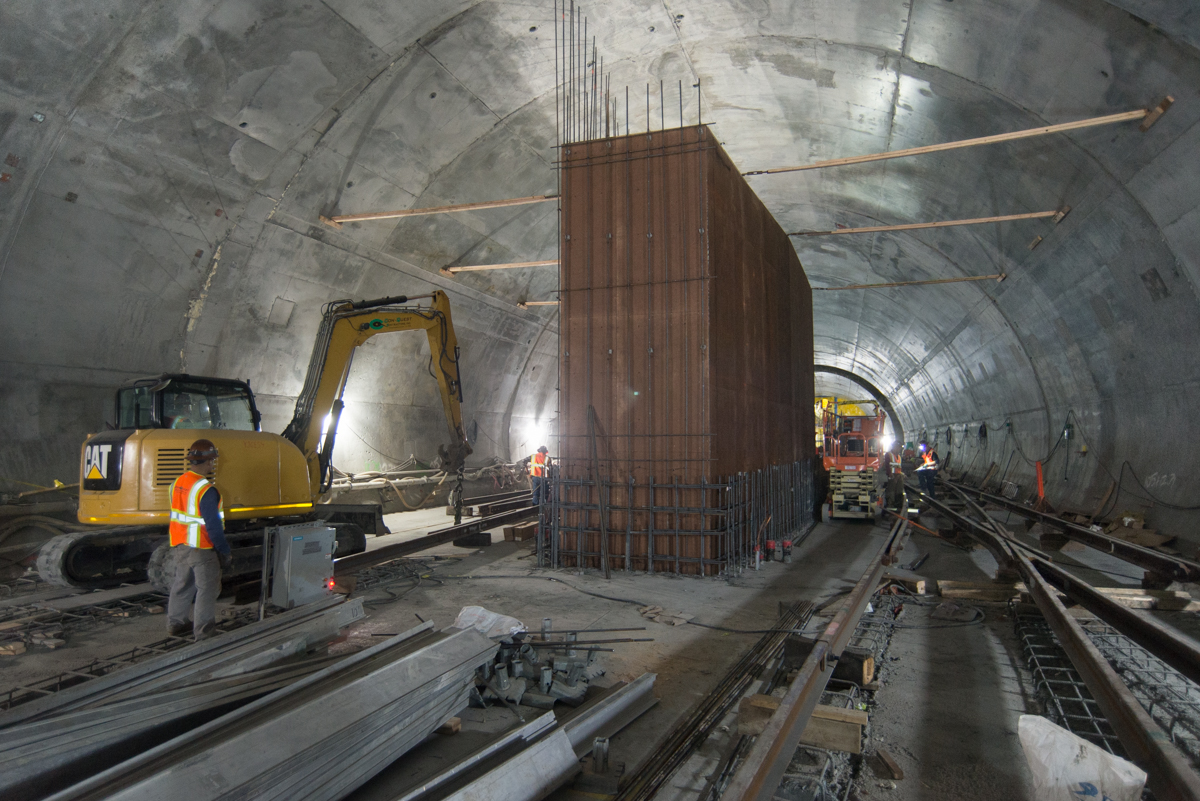 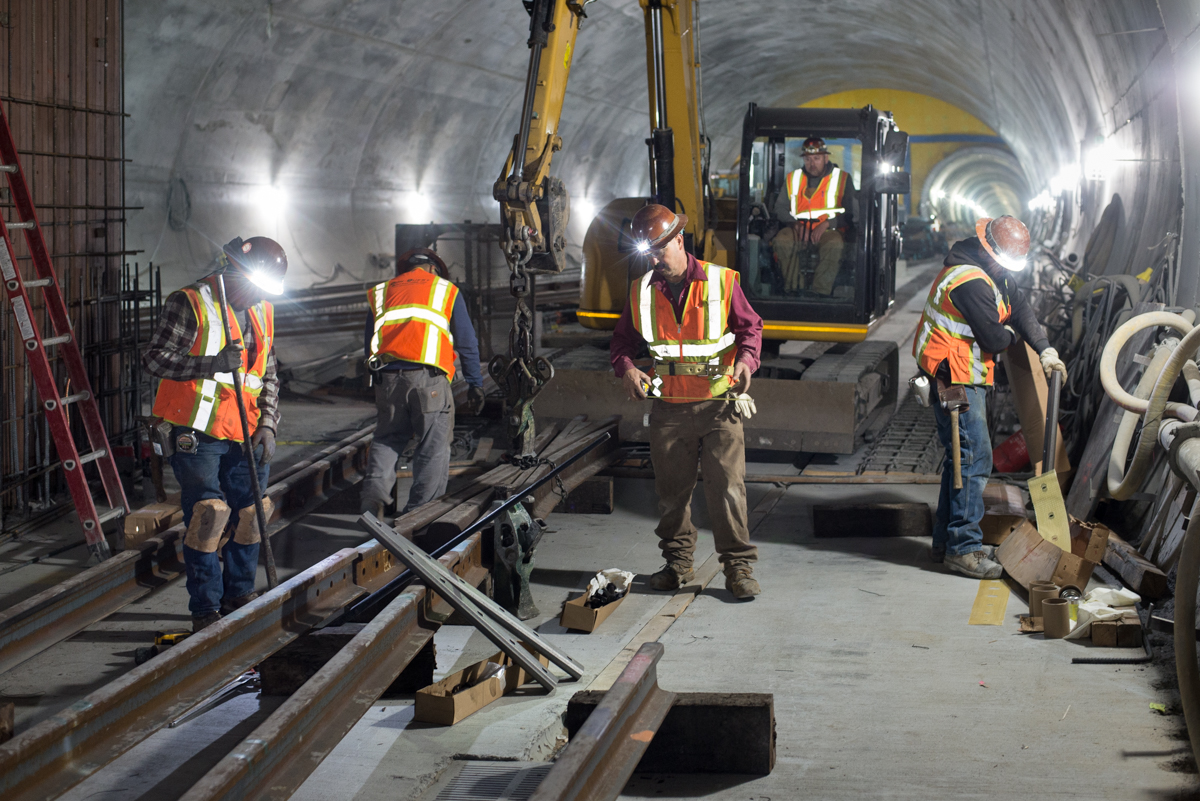 A crew roughly places sections of rail atop temporary cribbing ahead of constructing track foundations. 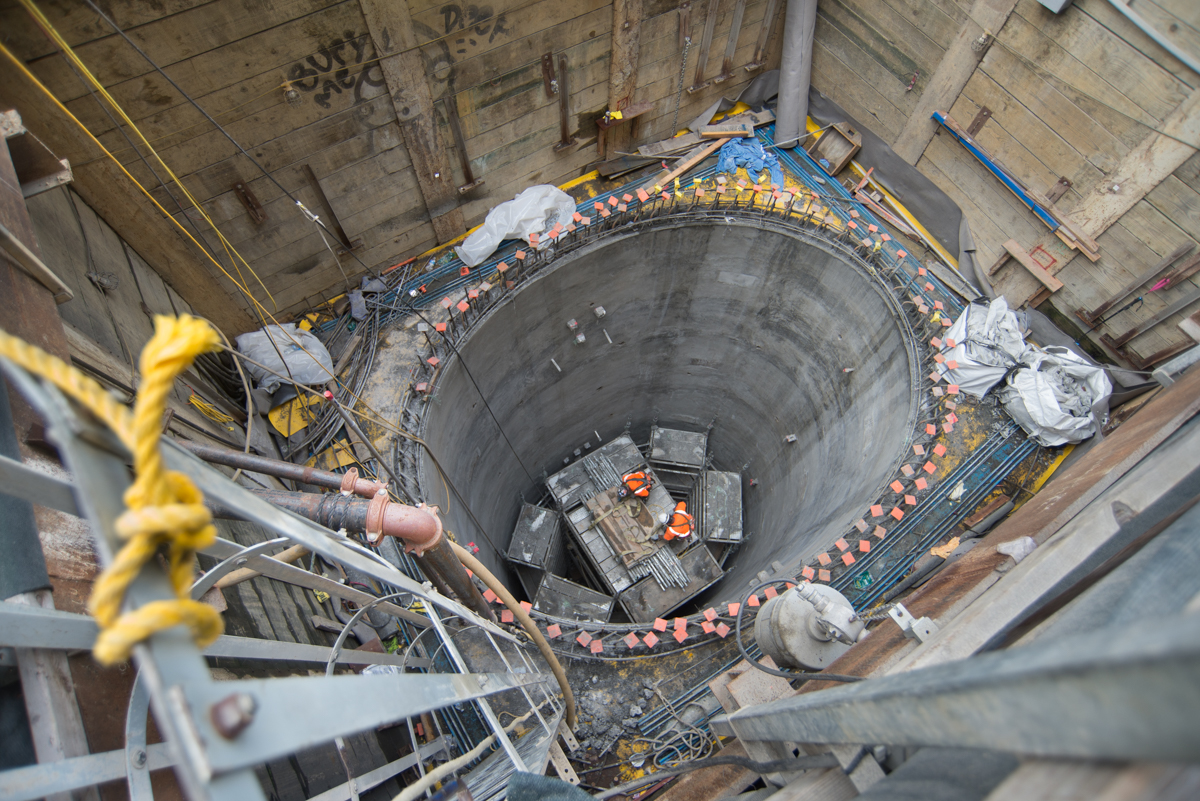 Scaffolding inside the north egress shaft is now being disassembled, following the completion of the inner shell of this future emergency exit. Overview