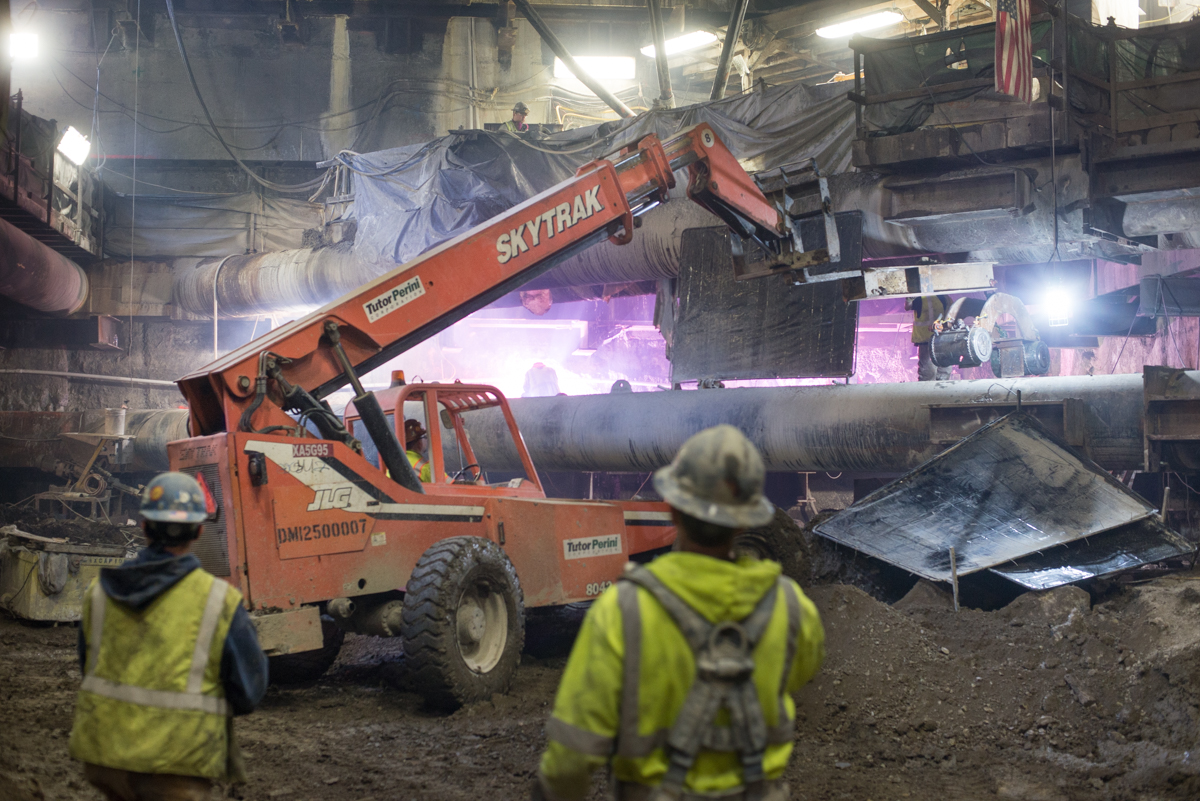 New temporary steel bracing is being installed inside the Chinatown Station headhouse to prepare for the next phase of excavation, there. Central Subway | Project Advancement 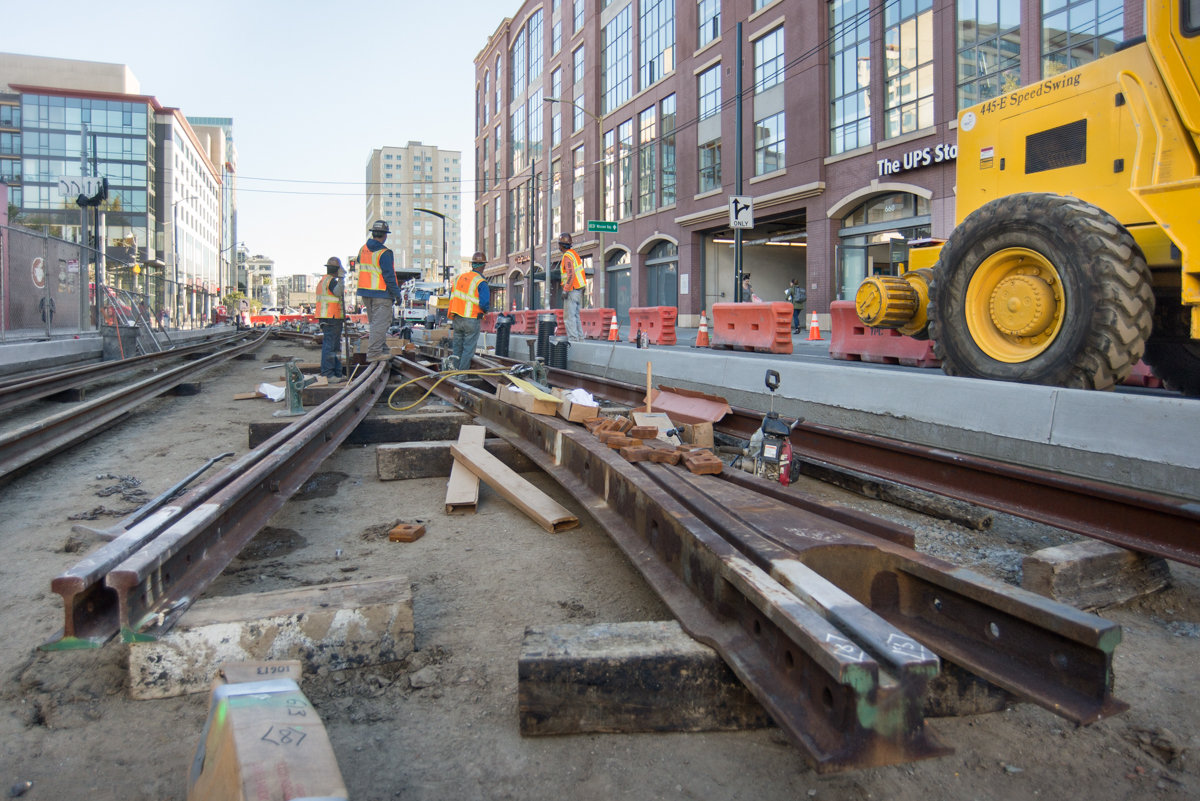 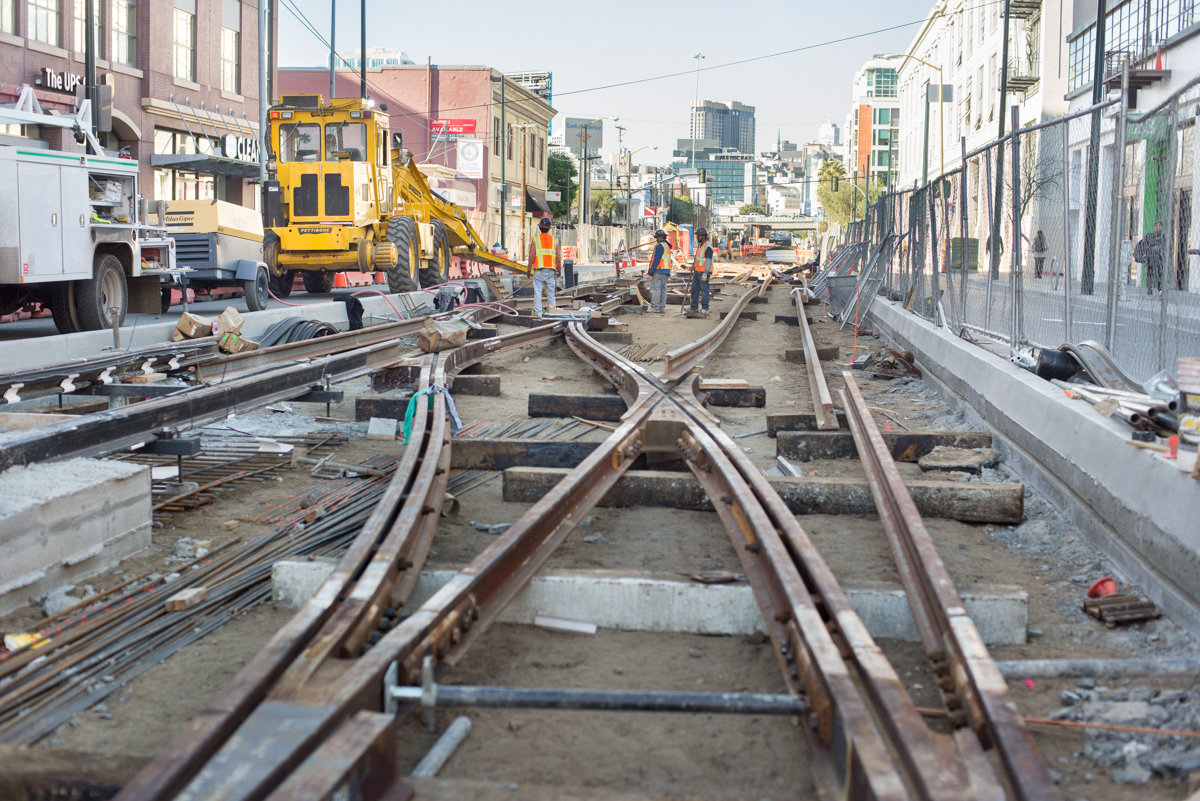 Two track crossovers are being installed just south of Bluxome, allowing for versatility in future light rail operations further up the line. 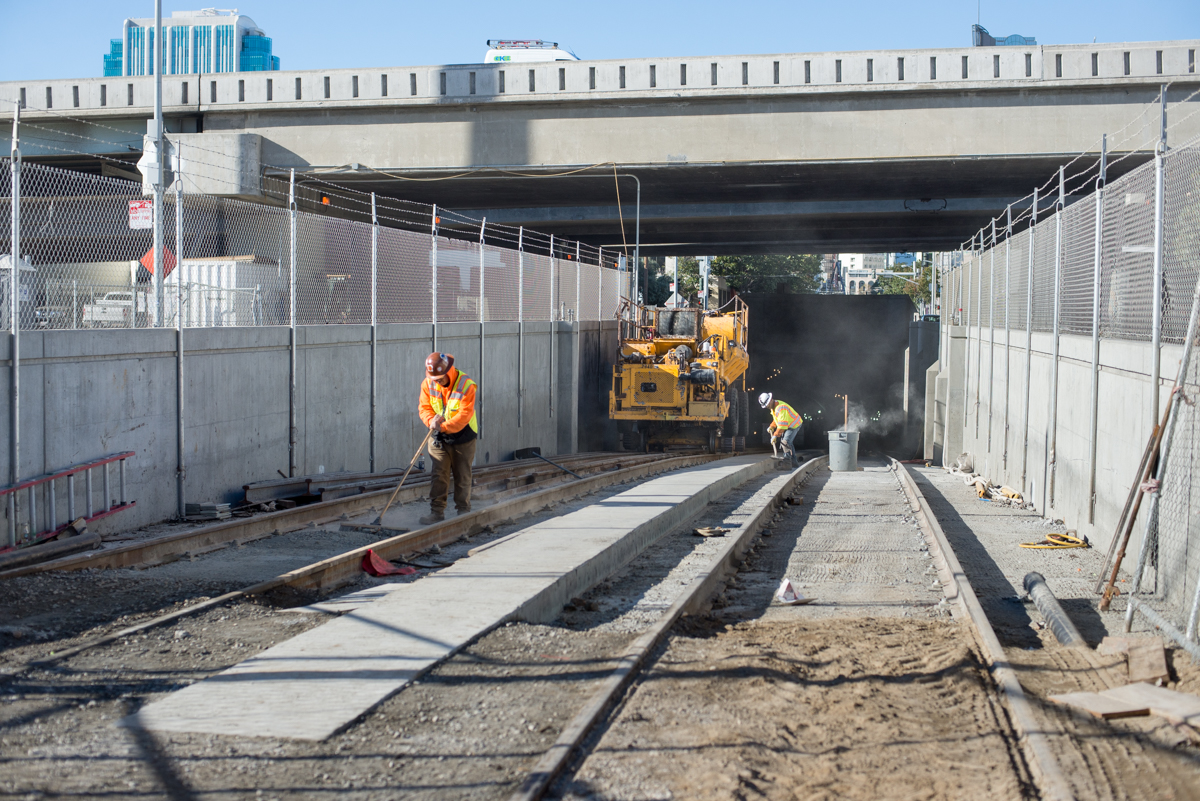 What: Street and sidewalk restoration
Time: 7 a.m. - 5:30 p.m.
When: Monday to Saturday
Where: 4th Street between King and Welsh 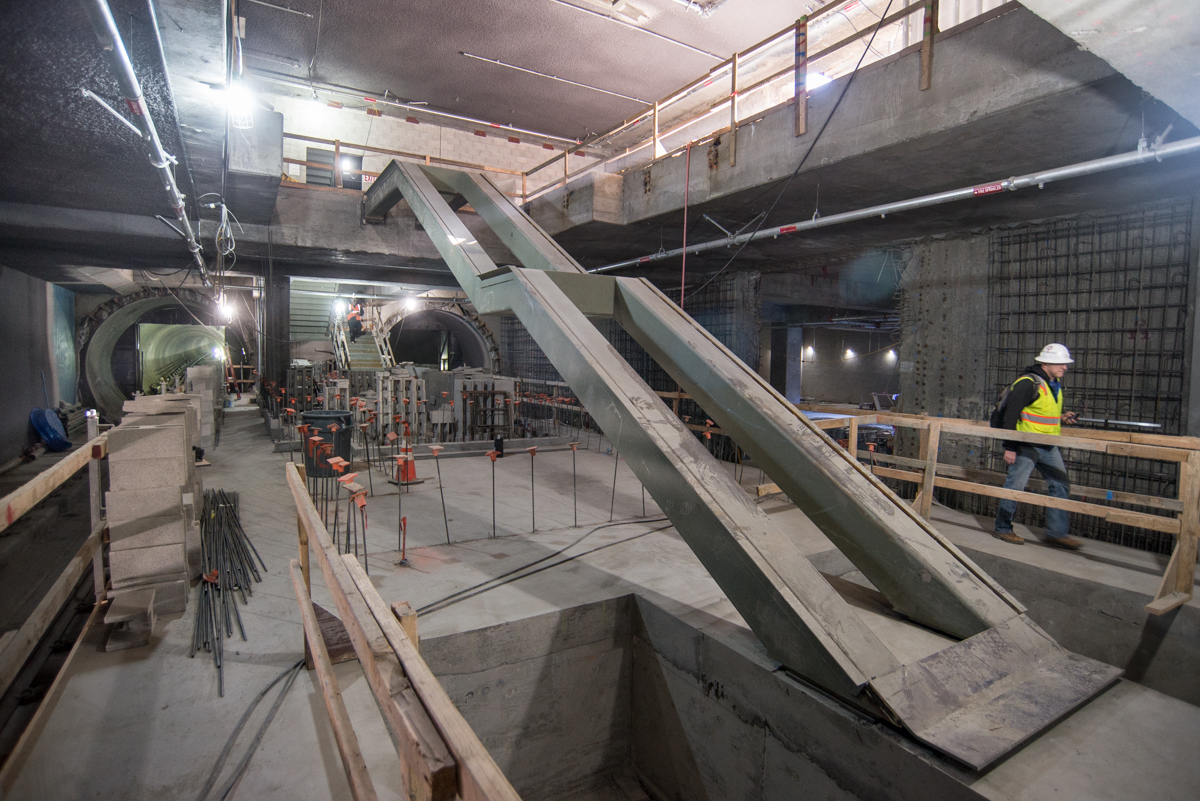 The steel frame of the staircase for passengers to enter and exit the southern end of the station platform has been installed adjacent to the footings for future escalators. Yerba Buena | Moscone Station 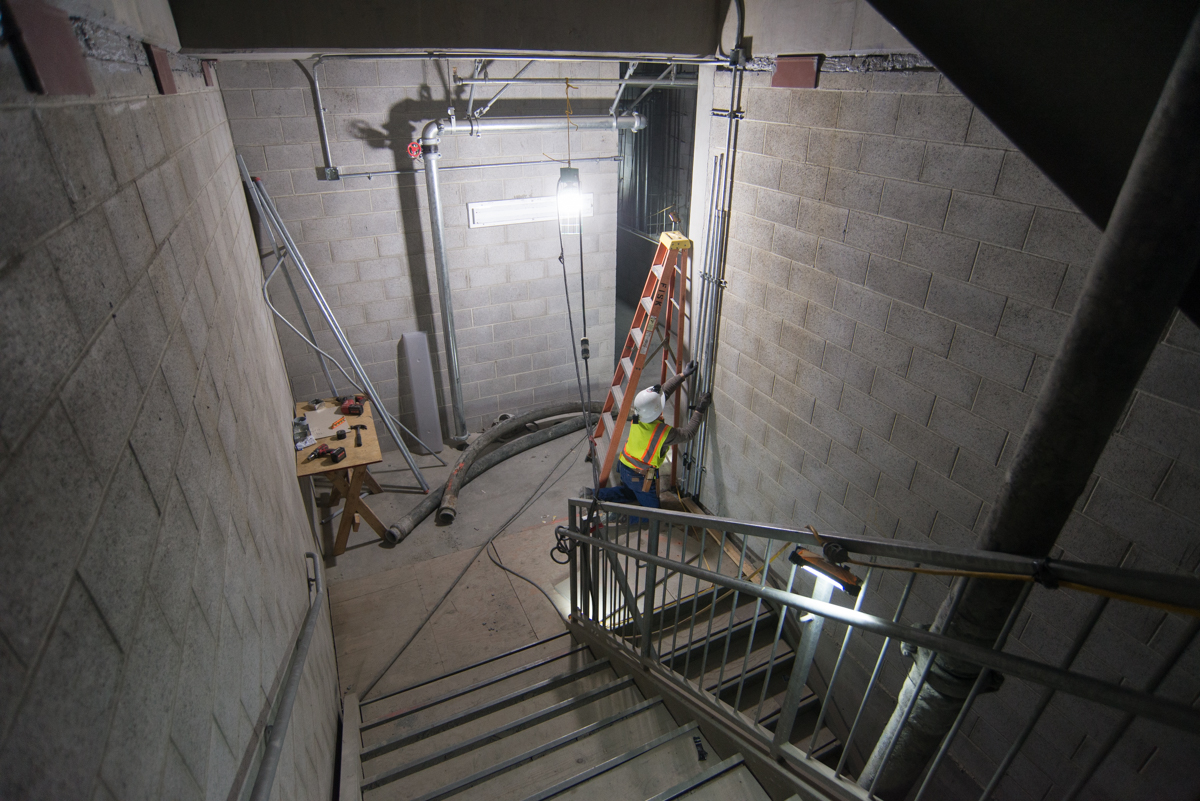 Conduit for electrical and communications systems are being installed at the north end of the station box. 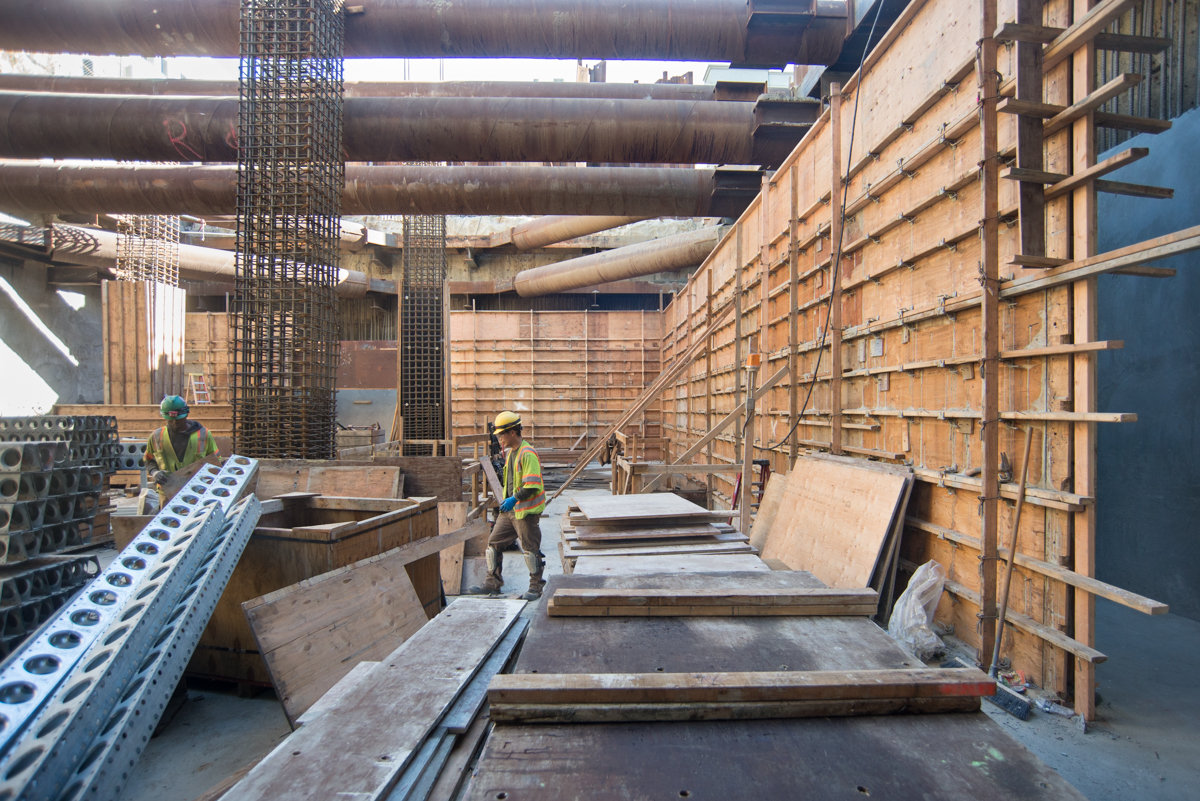 Massive concrete forms for interior walls and columns are being built inside the station headhouse. Overview 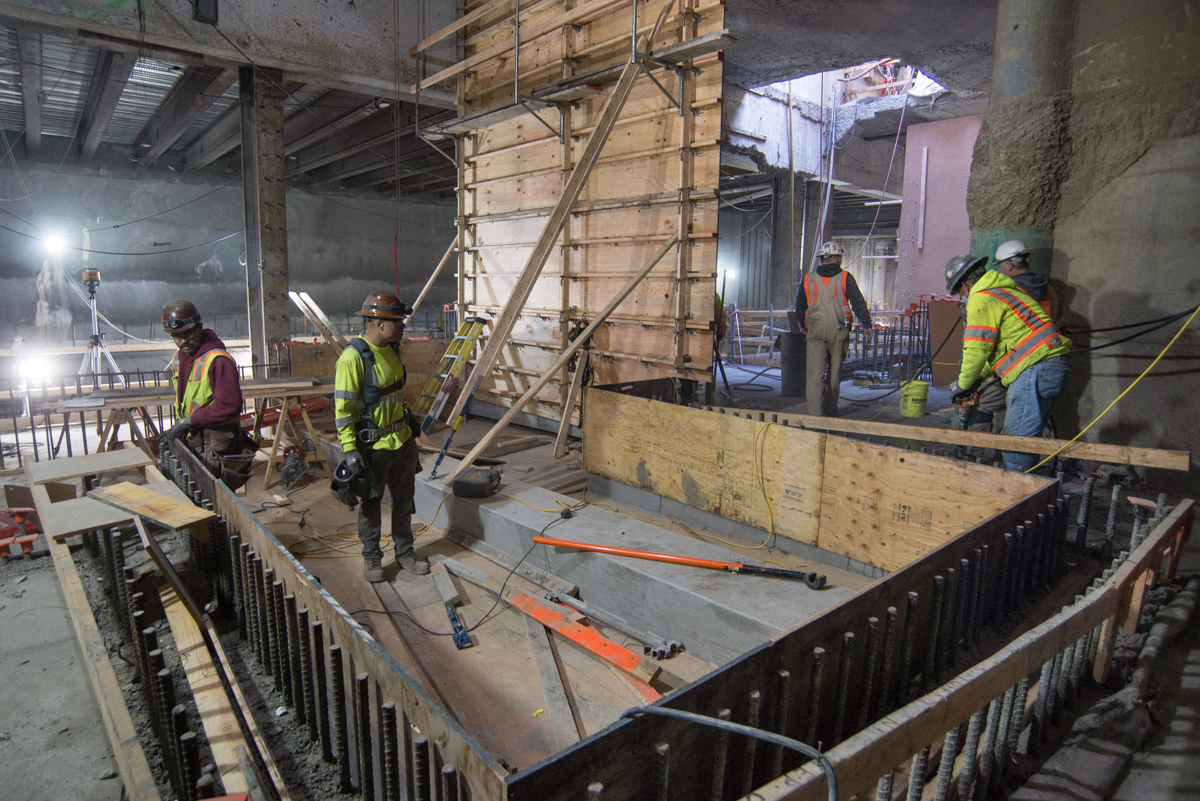 One lane on the south side of Ellis Street is open at all times for eastbound traffic.  Parking garage access is open on north side of Ellis Street. Street restoration work is continuing north of the intersection of Stockton and Market streets.  The installation of waterproofing, structural steel, and concrete at the southeast corner of the Union Square Garage continues.  There will be a continued presence of vehicles and equipment as work at this location continues.  Installation of internal structural elements and utilities is ongoing under Stockton Street as well as the northeast corner of Stockton and O'Farrell. 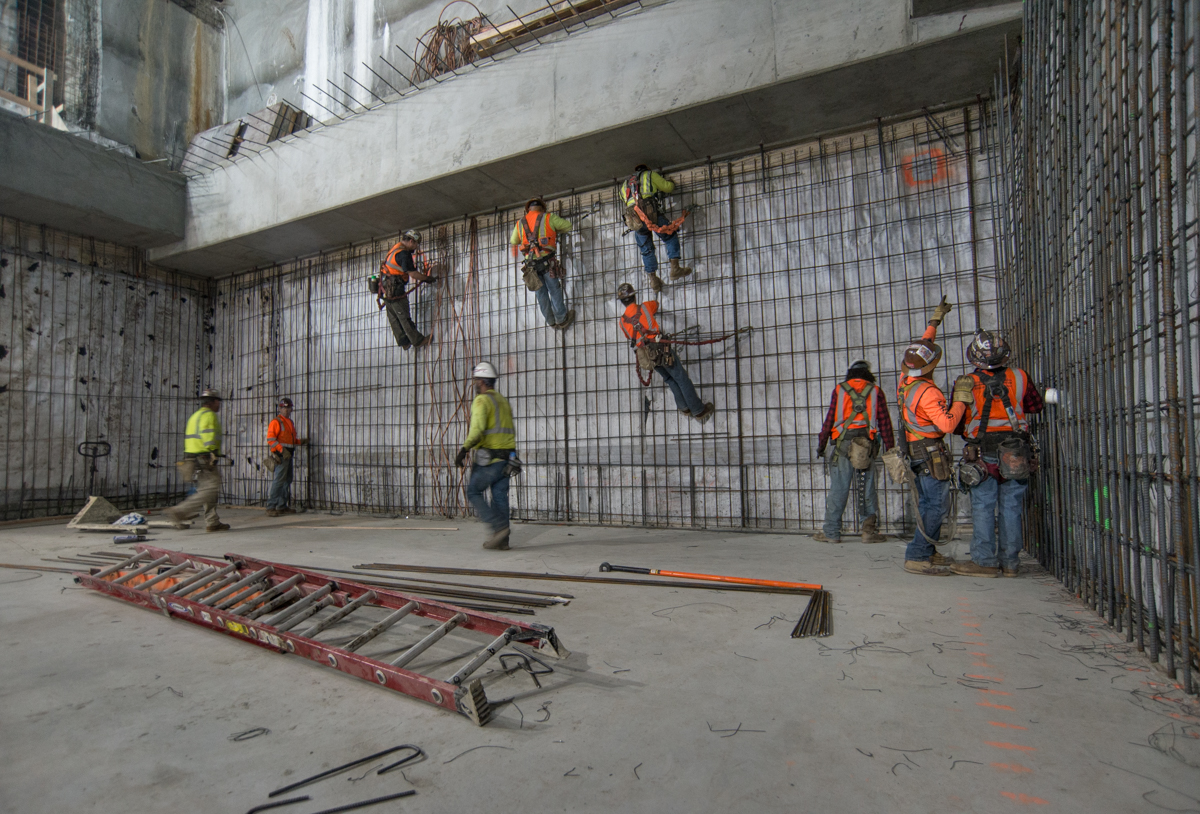 A team of workers inside the north concourse construct rebar cages which will become the finished interior walls. 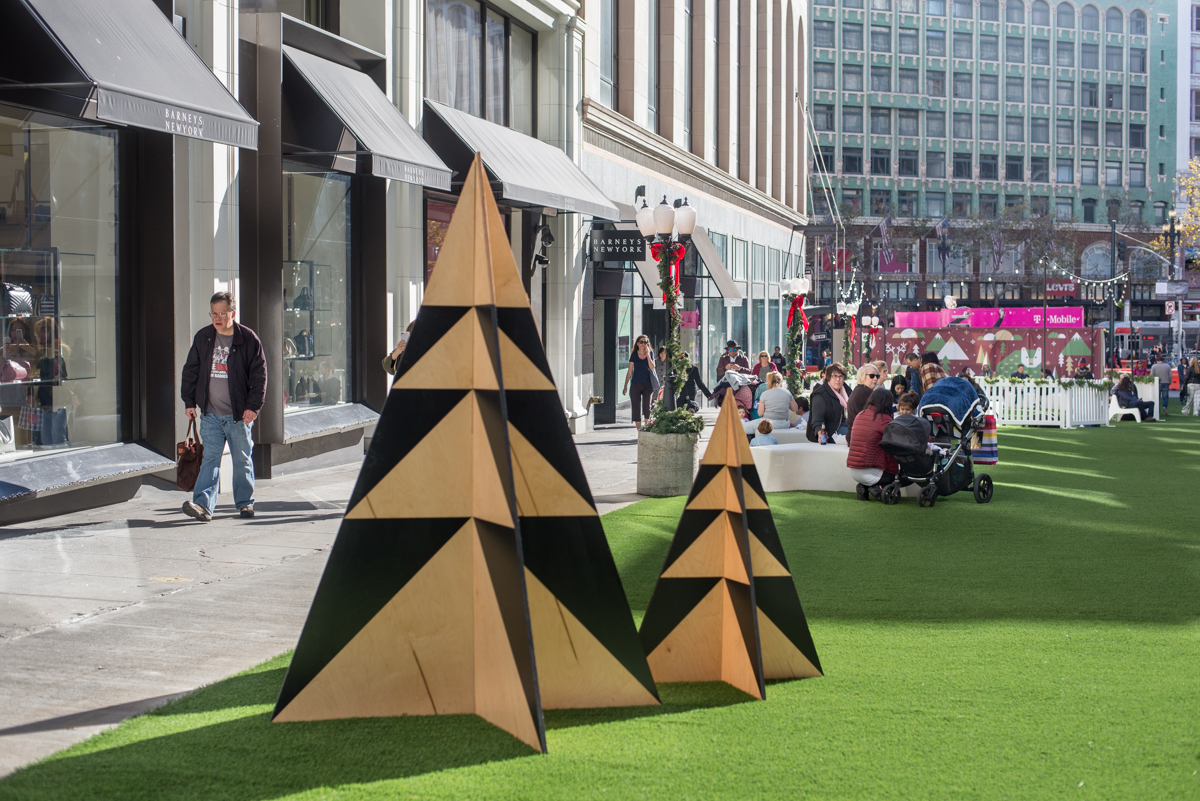 Stylized trees are part of festive holiday ornamentation at the 2017 Winter Walk along Stockton between Ellis and Geary. Overview 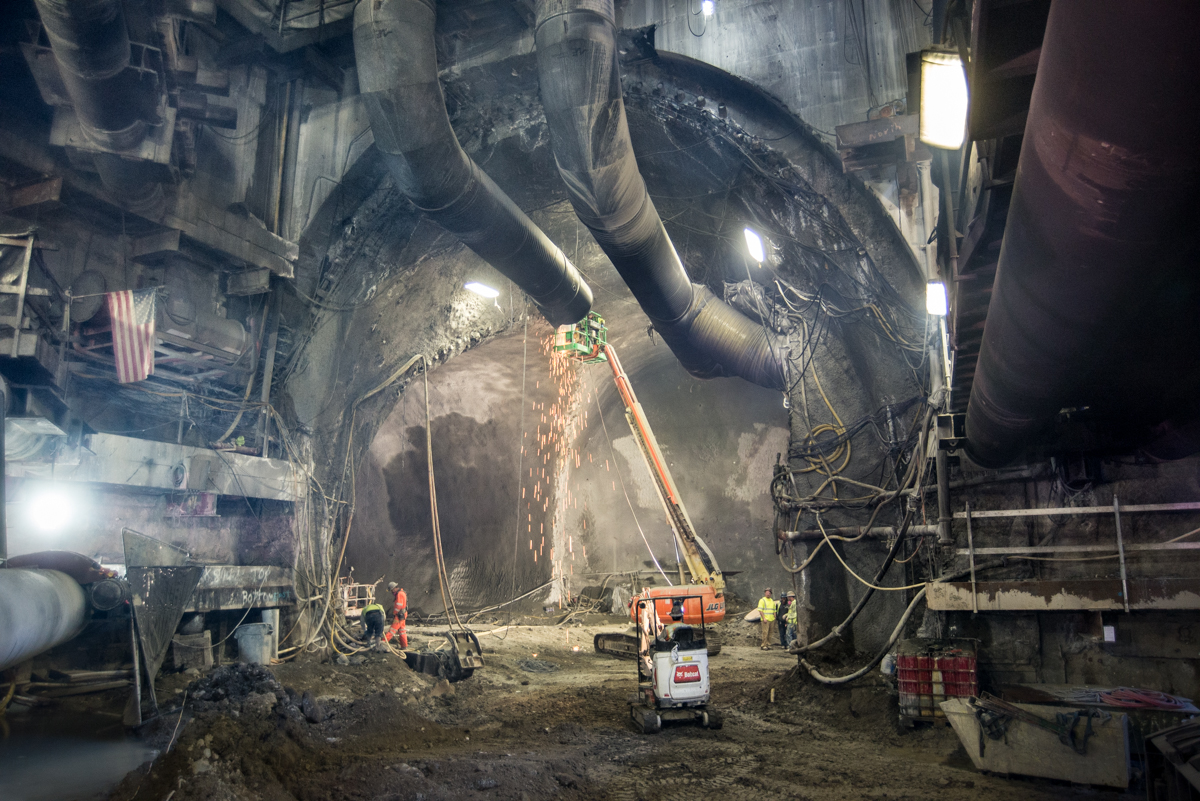 Looking east into the cross-cut cavern from the station headhouse, a shower of sparks falls as workers modify ventilation ducts to reflect a new, open platform cavern. Chinatown Station The construction of Chinatown Station uses the sequential excavation method (SEM) along Washington Street and Stockton Street. The SEM provides a high degree of flexibility during construction and makes it possible to control virtually all kinds of ground conditions, thereby greatly reducing the risks of construction. This method of tunnel construction is used worldwide for small to large openings in a variety of ground types ranging from rock to soil. 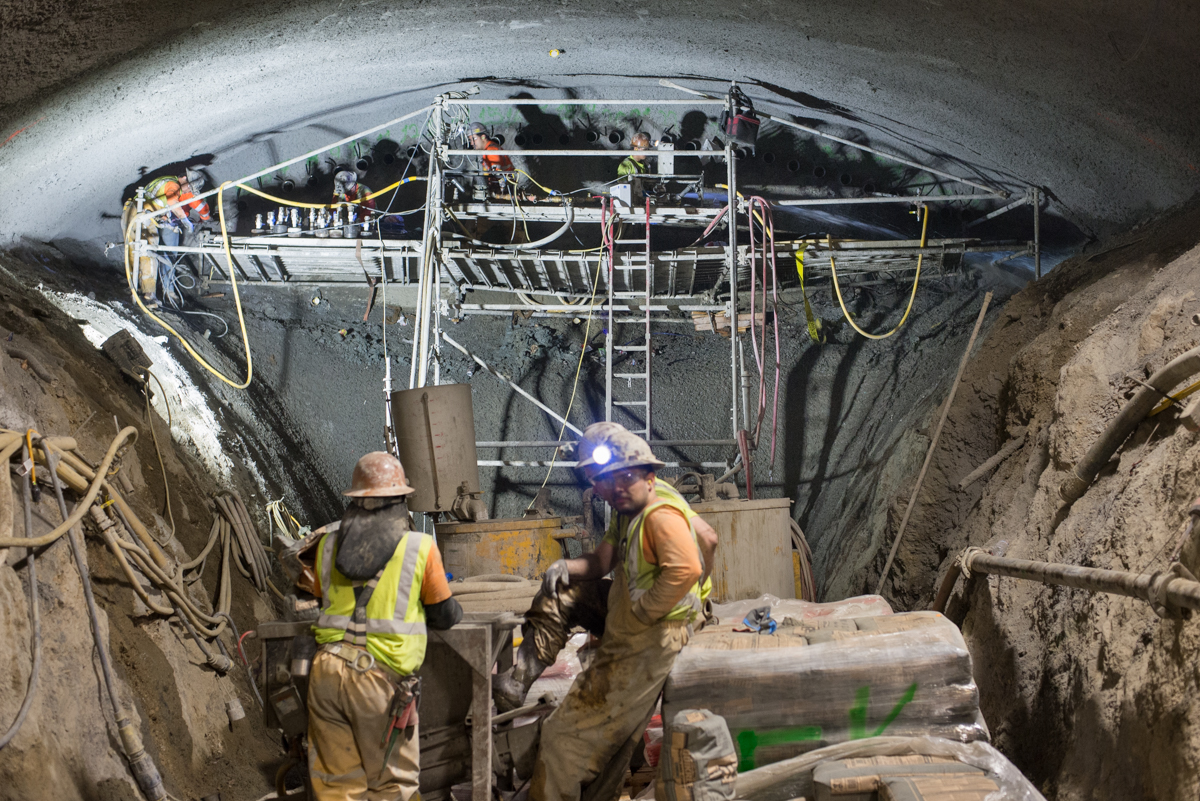 A scaffolding inside the top heading of the south platform cavern's center drift allows workers to get up close to the current face of excavation. 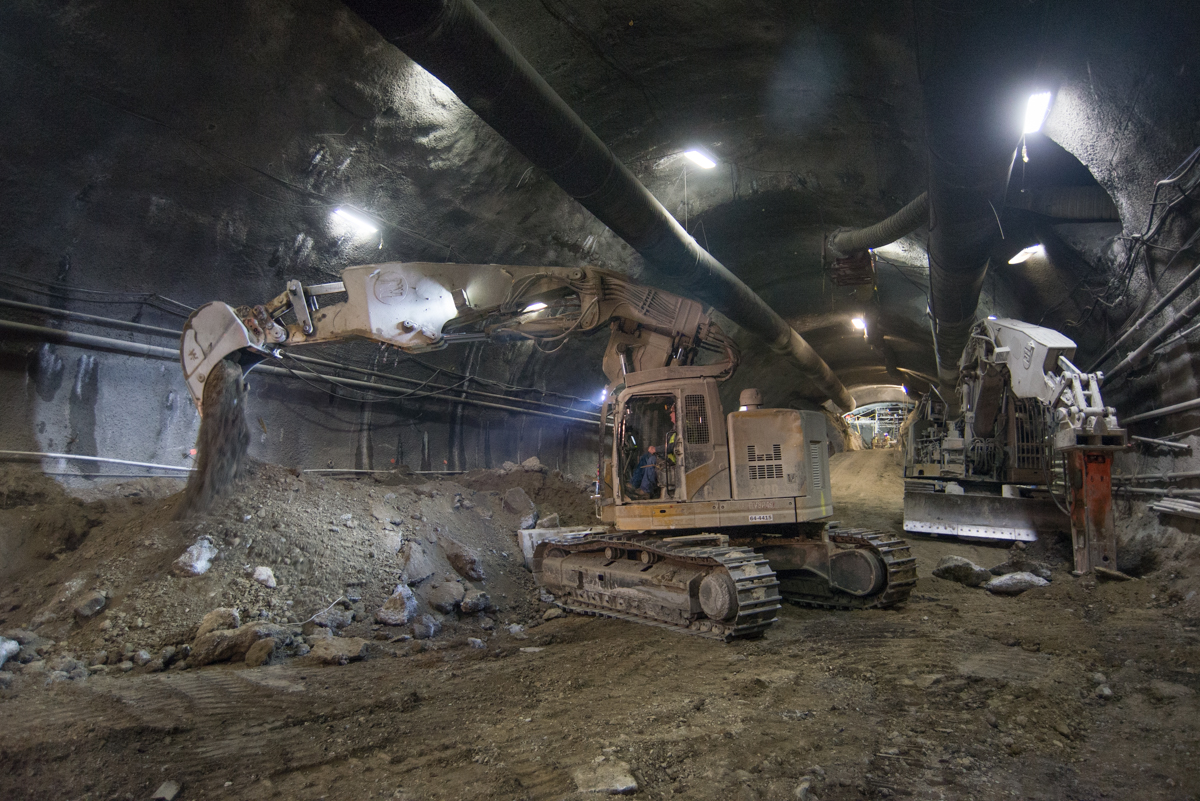 A large excavator collects excavated material inside the southern portion of the station platform cavern prior to removal offsite. Overview