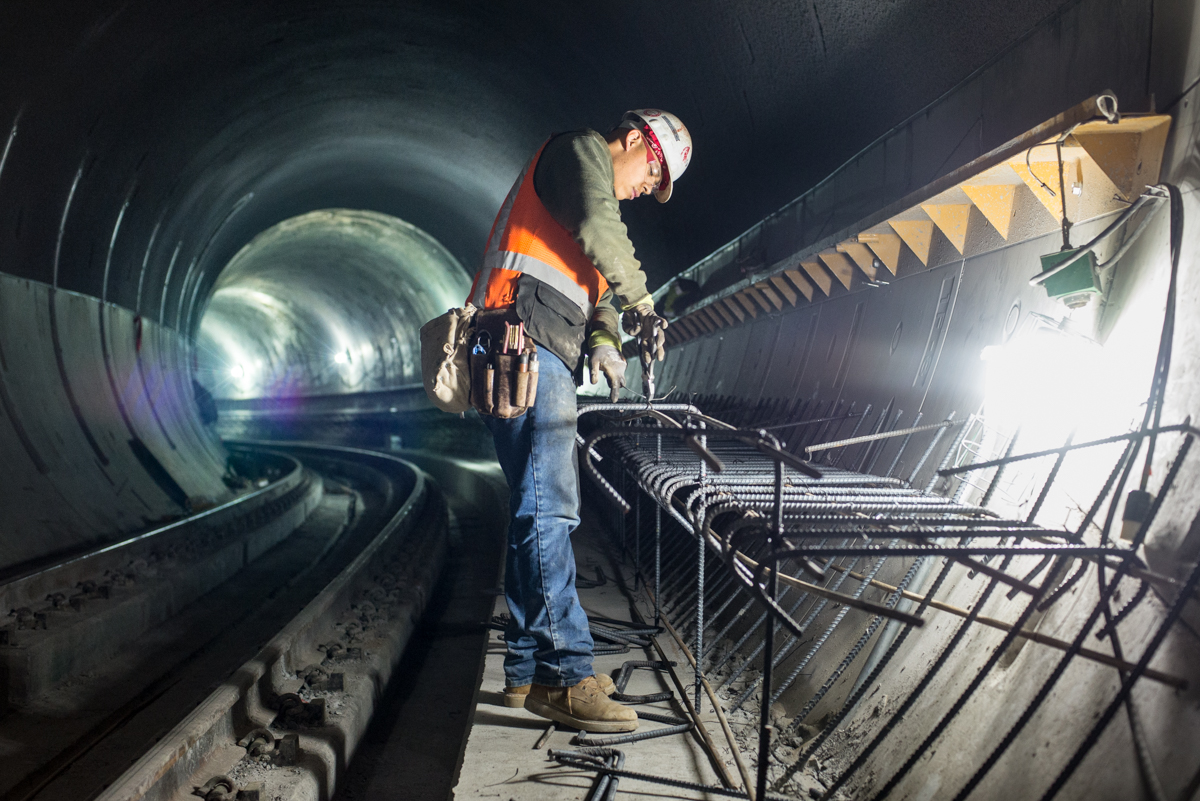 A worker ties sections of rebar together with wire as part of tunnel walkway construction in the northbound tunnel just south of the Union Square/Market Street Station platform. Central Subway | Project Advancement 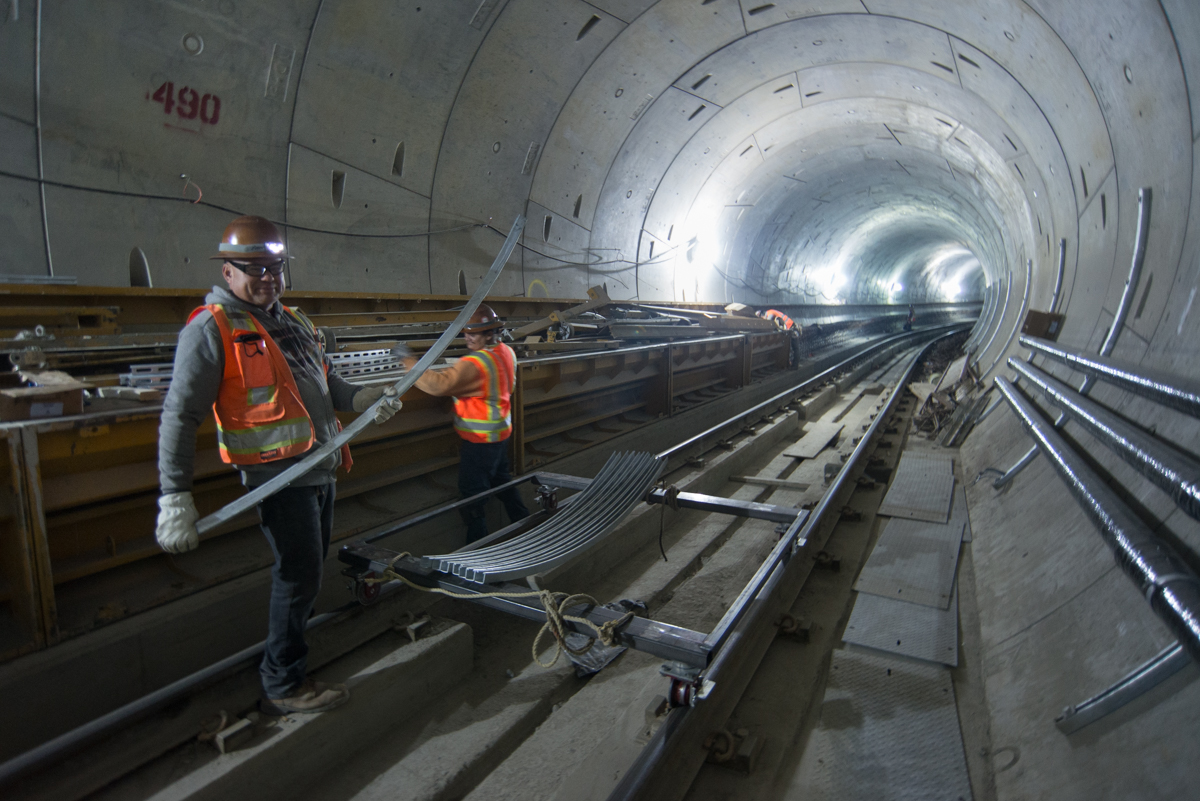 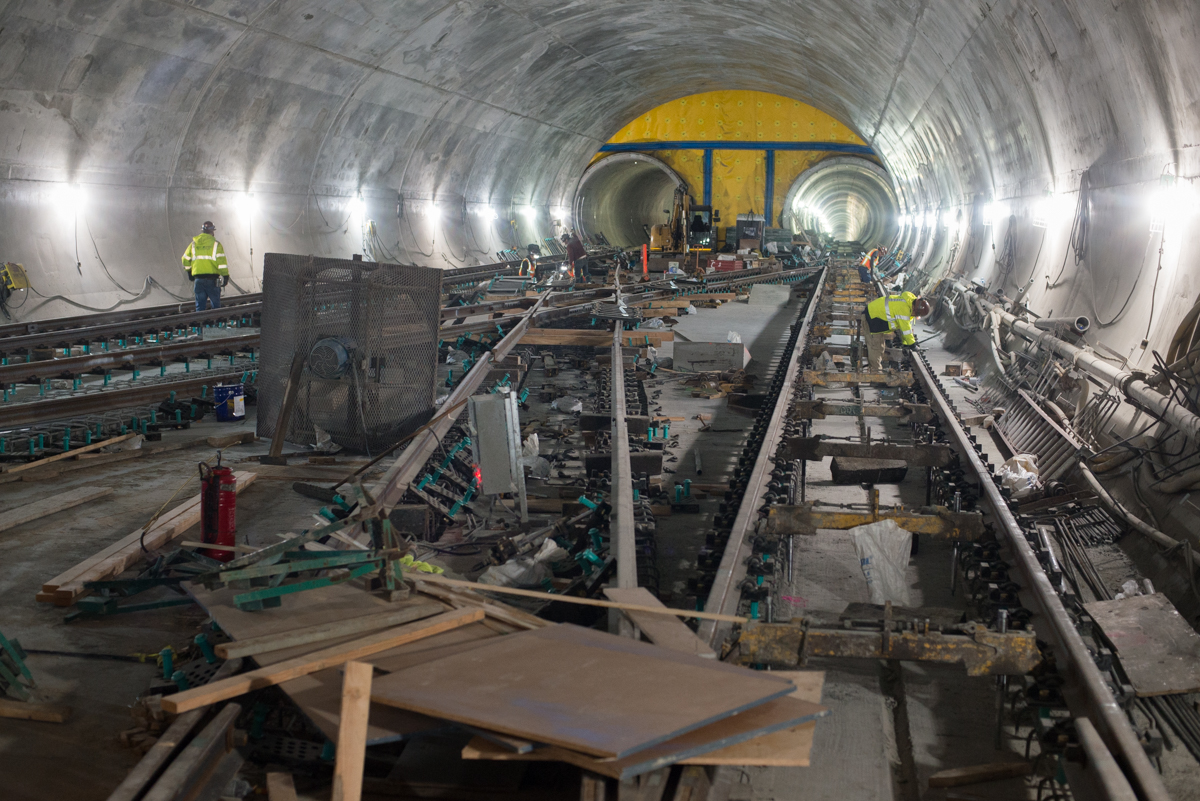 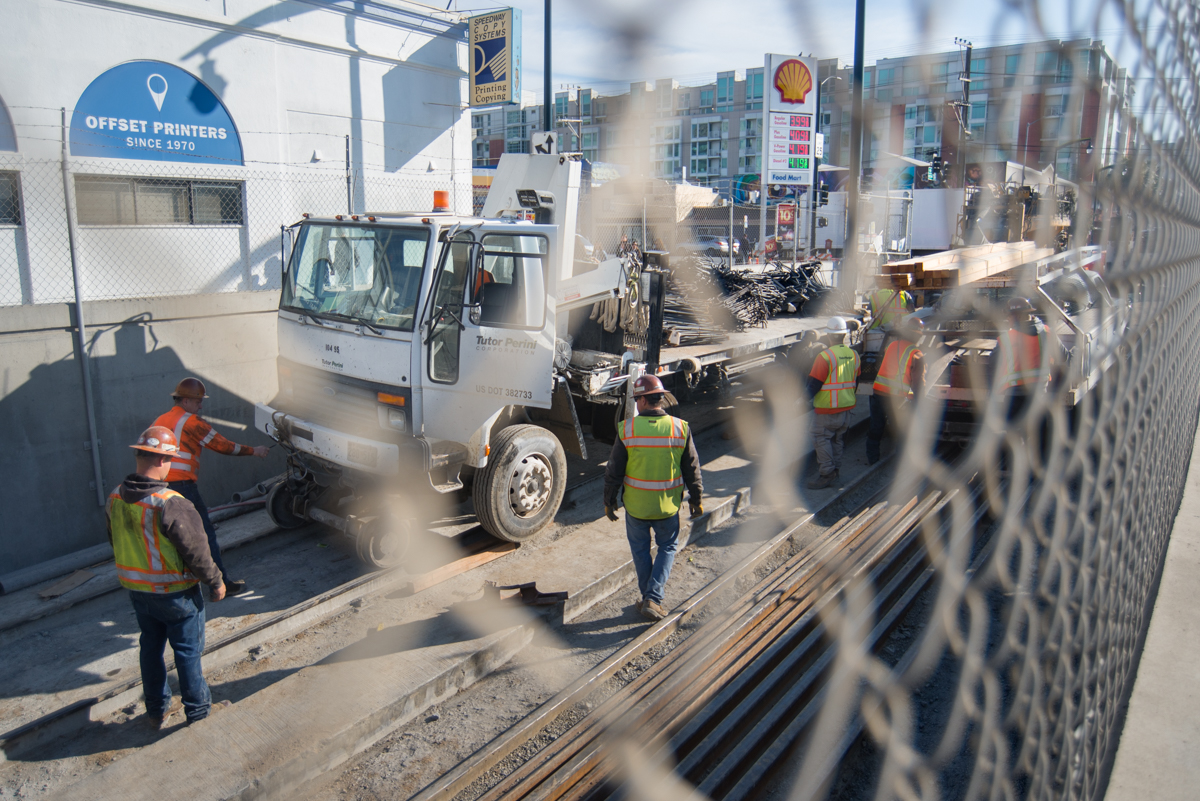 A vehicle laden with rebar to be used in tunnel walkway construction lowers its rail wheels before entering the northbound tunnel. Overview 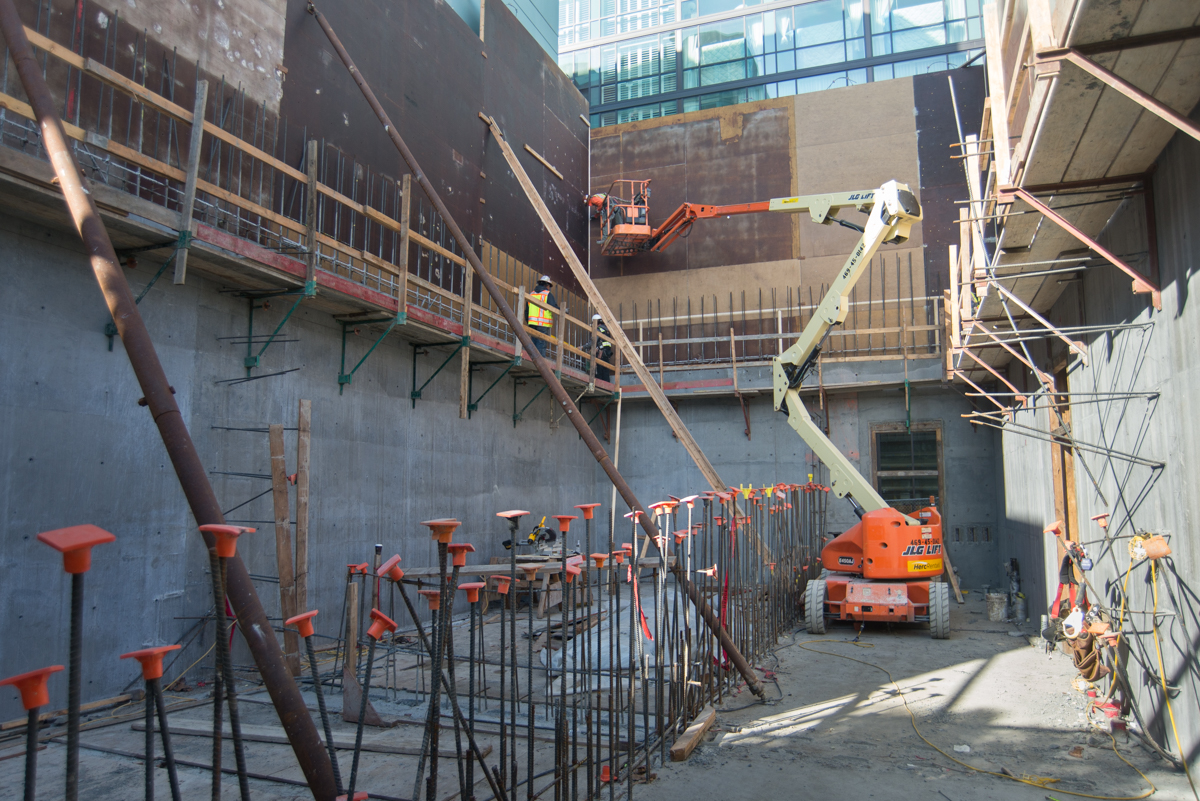 Carpenters construct a new level of concrete formwork atop existing walls for a future ventilation structure along the west side of the Yerba Buena/Moscone Station headhouse. Yerba Buena | Moscone Station 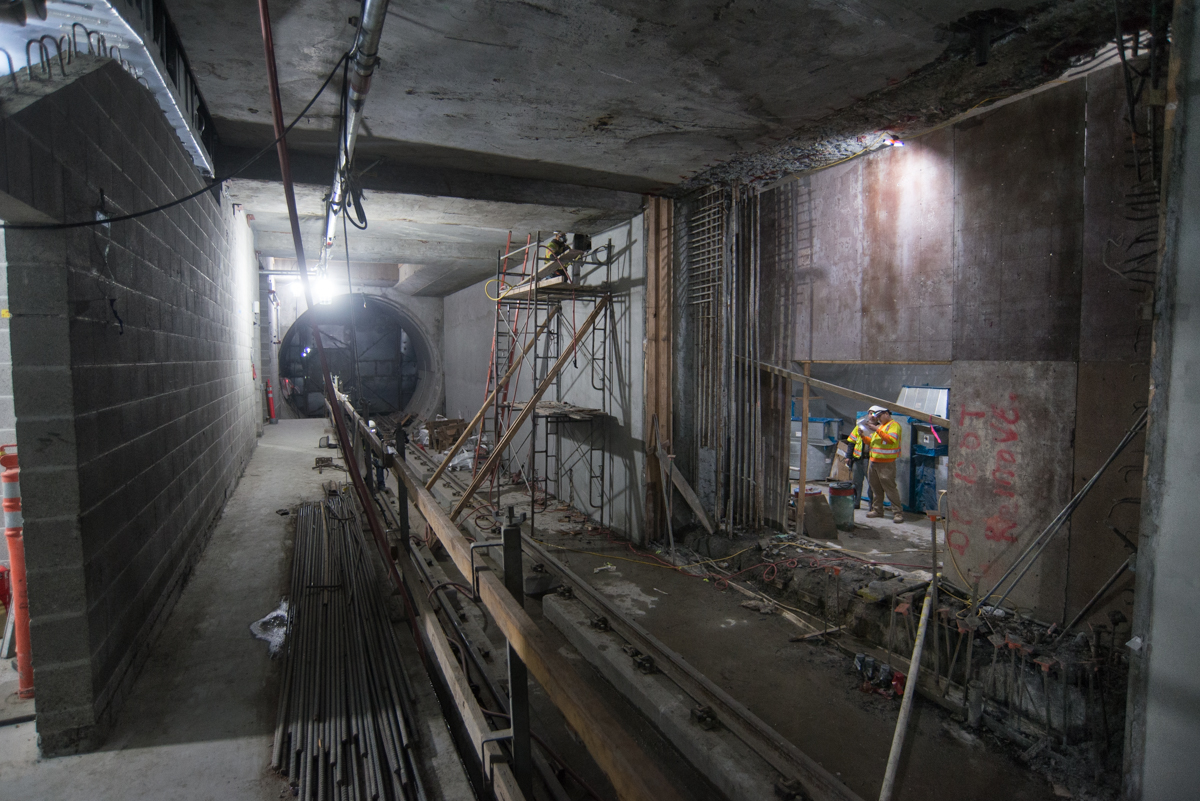 New sections of wall surfaces have been completed along the southbound side of the station platform. 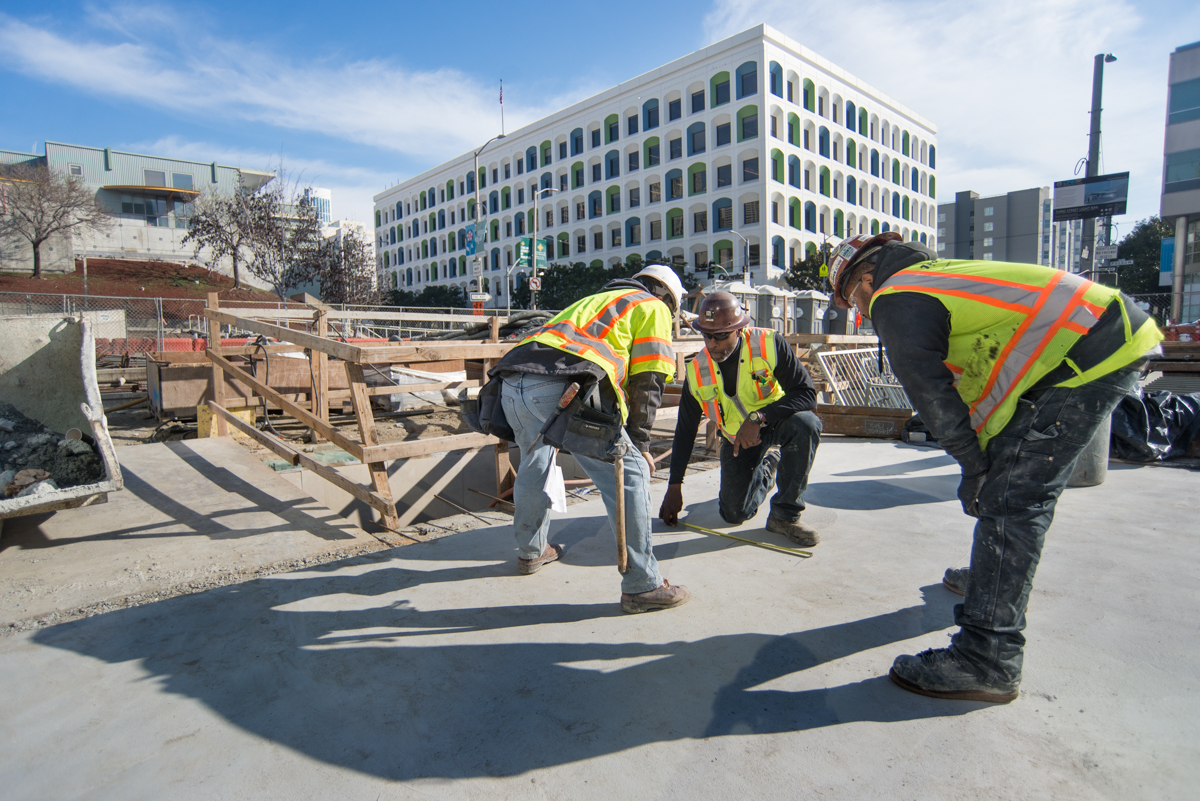 A supervisor gives instruction atop the finished concrete slab of the Yerba Buena/Moscone Station headhouse. Overview 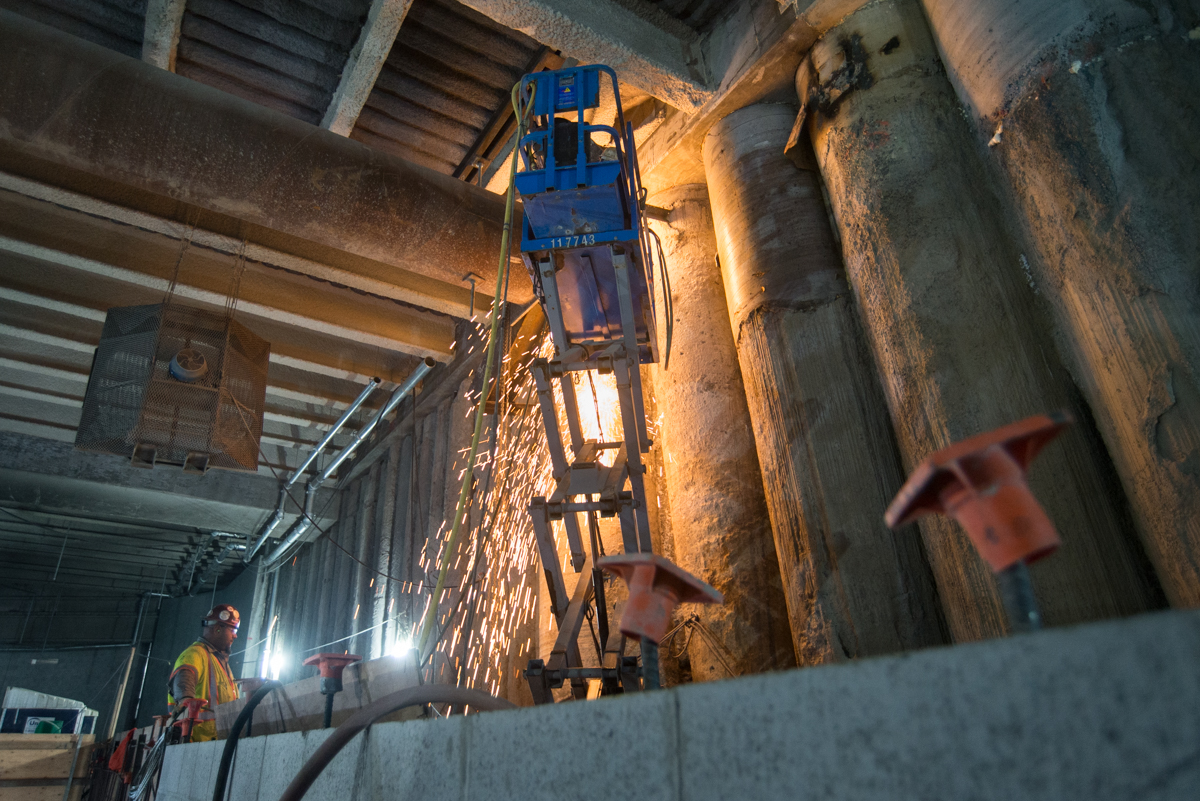 A shower of sparks falls from a scissor lift under the intersection at Stockton and Geary as workers prepare the interior for permanent structural elements. Union Square | Market Street Station

One lane on the south side of Ellis Street is open at all times for eastbound traffic.  Stockton Street between Geary and Ellis is under a long-term closure.  Parking garage access is open on north side of Ellis Street.  The installation of waterproofing, structural steel, and concrete at the southeast corner of the Union Square Garage continues.  There will be a continued presence of vehicles and equipment as work at this location continues.  Installation of internal structural elements and utilities is ongoing under Stockton Street as well as the northeast corner of Stockton and O'Farrell. 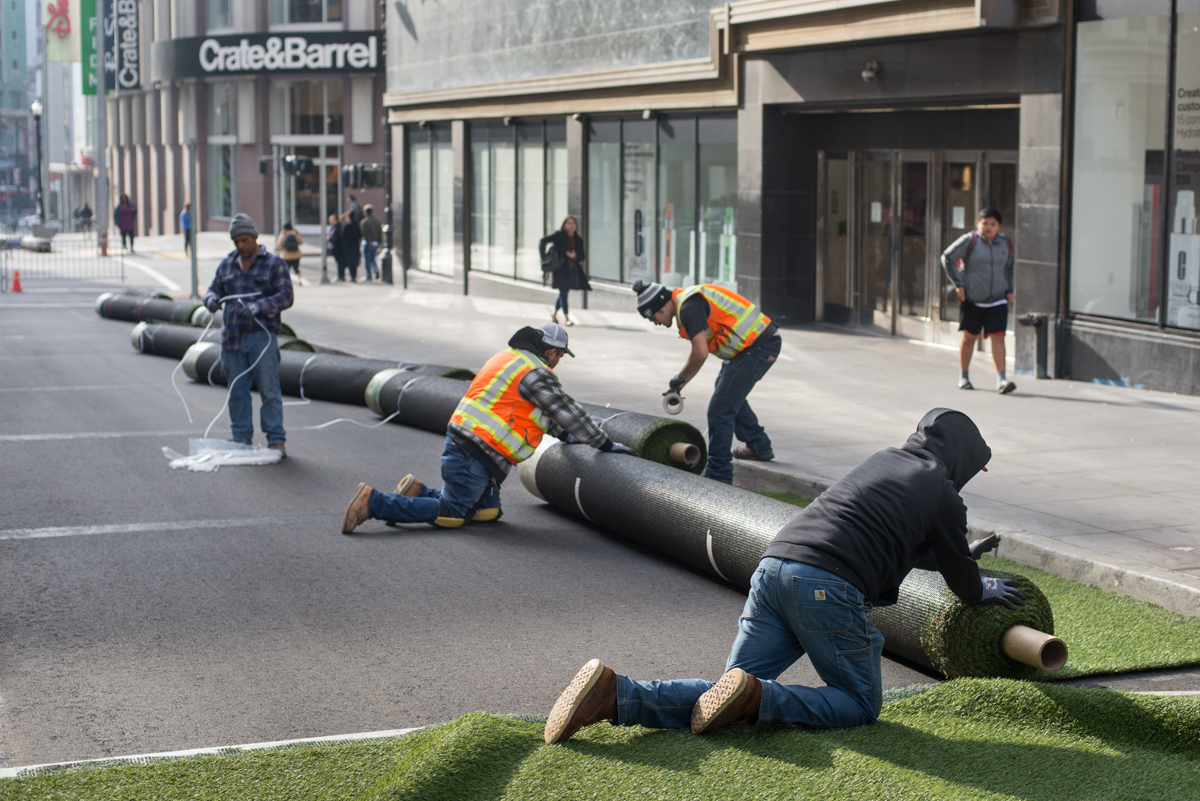 Segments of green turn are being rolled up and banded for storage, following the end of the holiday season Winter Walk on Stockton Street. 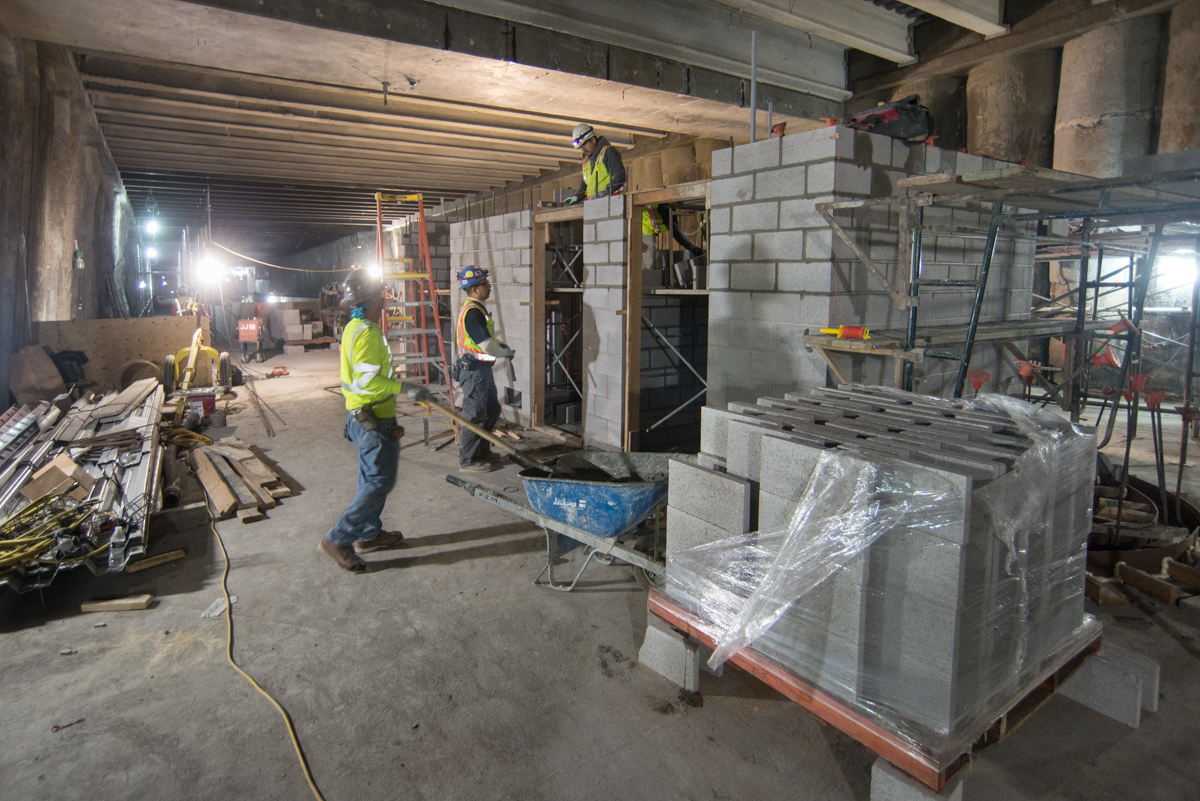 A crew on the mezzanine level of the station assembles interior cinderblock walls under the intersection at Stockton and O'Farrell. Overview 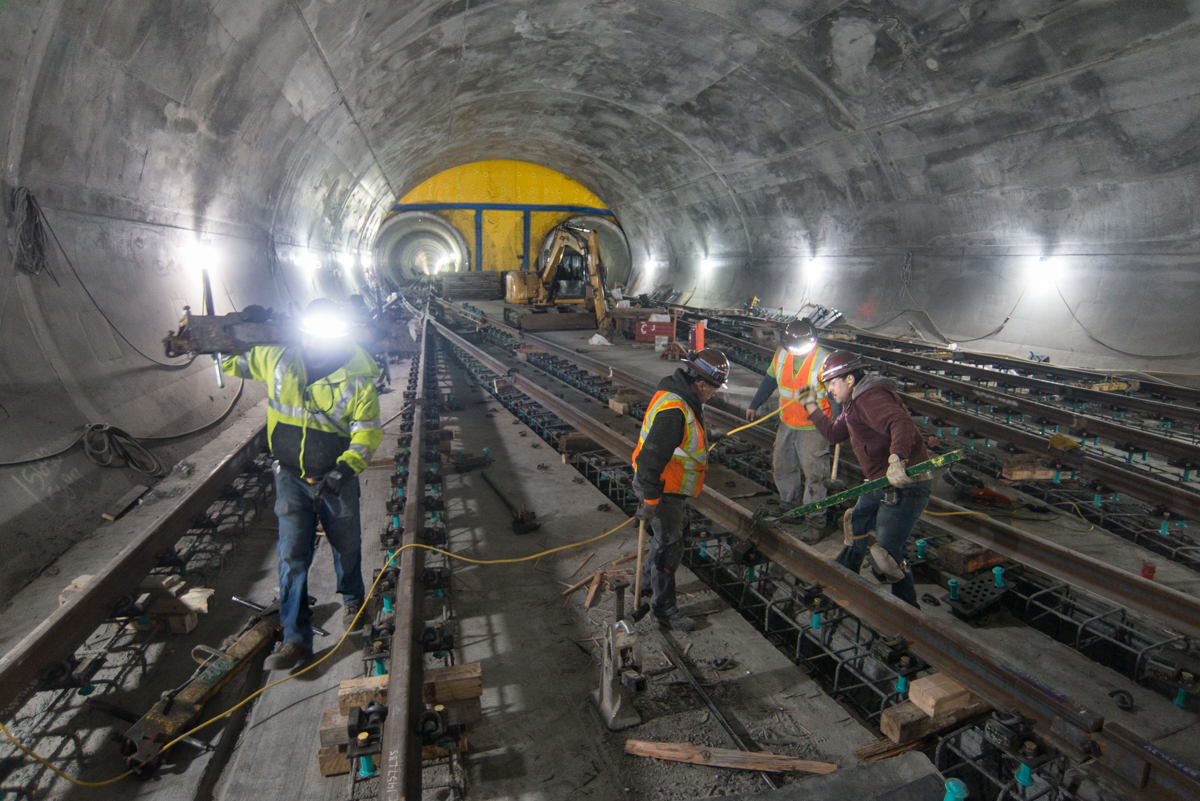 Workers use leverage, clamps, and adjustable spacers to precisely place sections of rail inside the Chinatown track crossover cavern. Chinatown Station The construction of Chinatown Station used the sequential excavation method (SEM), providing a high degree of flexibility and control over ground conditions, thereby greatly reducing the risks of construction. This method of tunnel construction is used worldwide for small to large openings in a variety of ground types ranging from rock to soil.  Excavation of the Chinatown Station site was completed in February 2018. 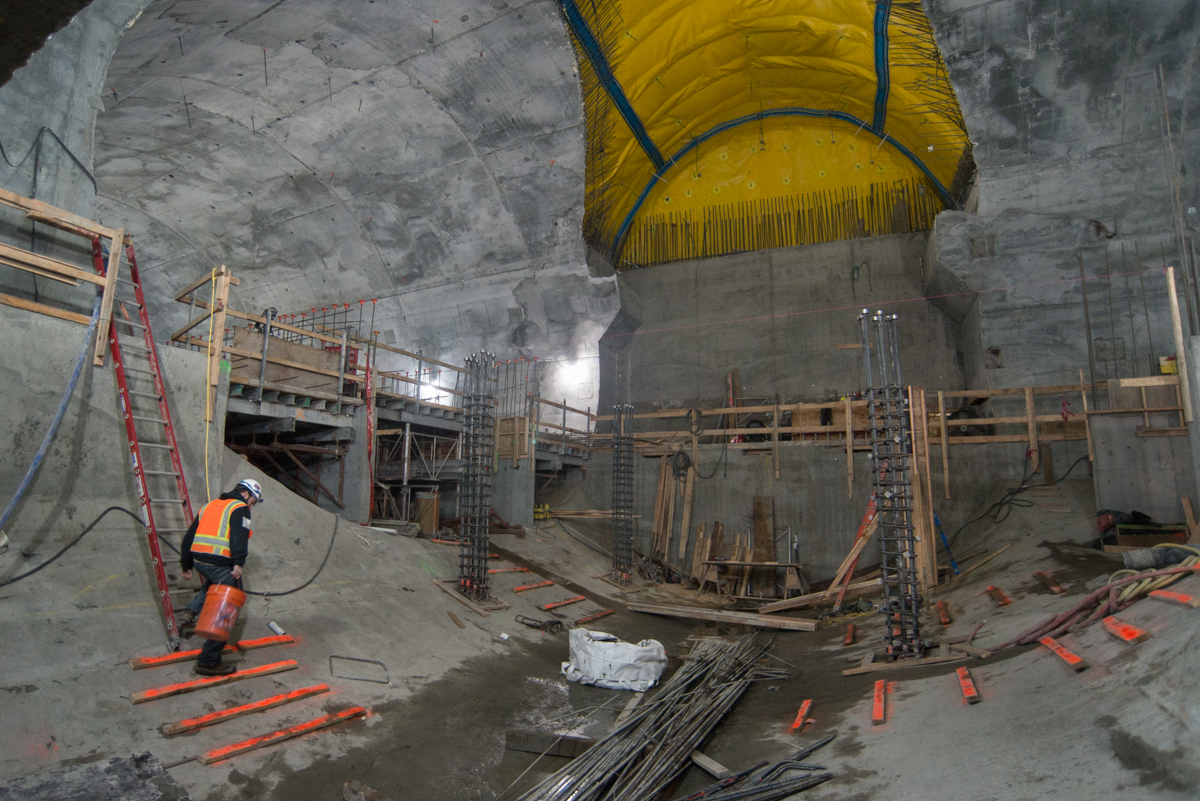 Rebar for future columns to support a section of the platform level has been installed inside the cross-cut cavern. 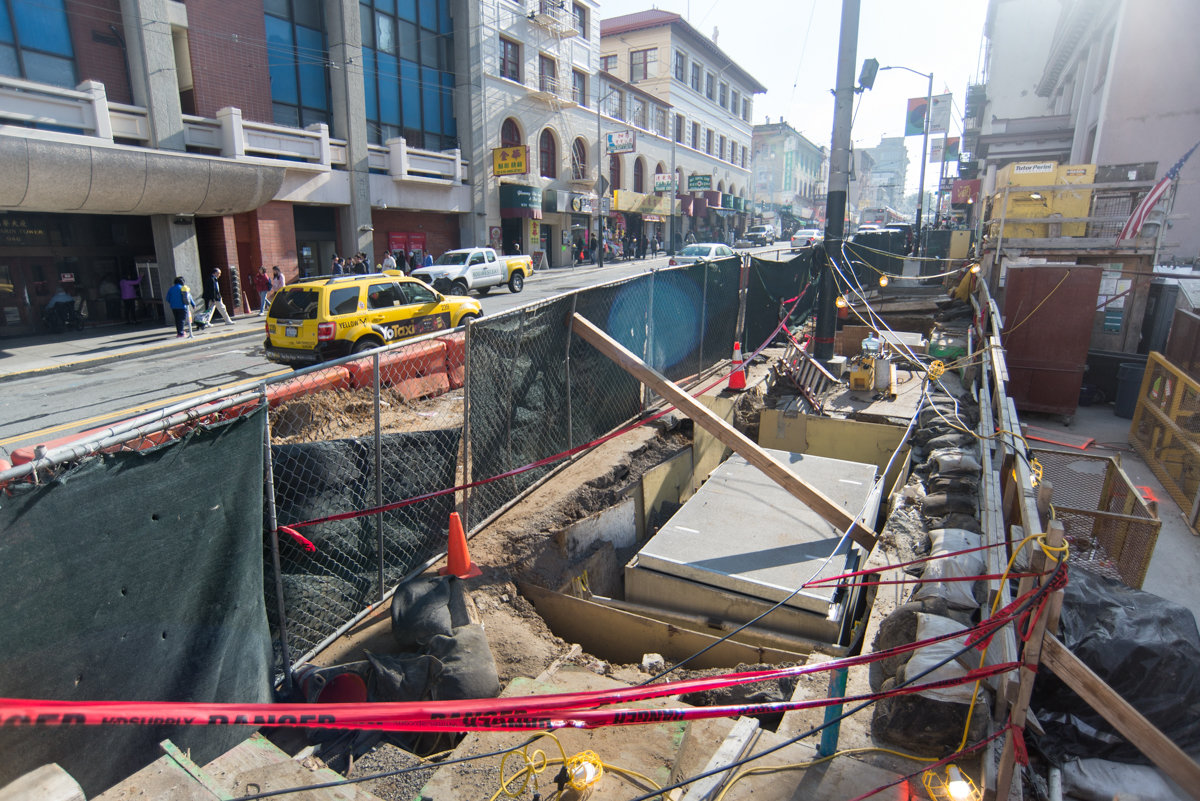 New utility vaults are being installed along the west side of Stockton adjacent to the Chinatown Station headhouse site. Overview