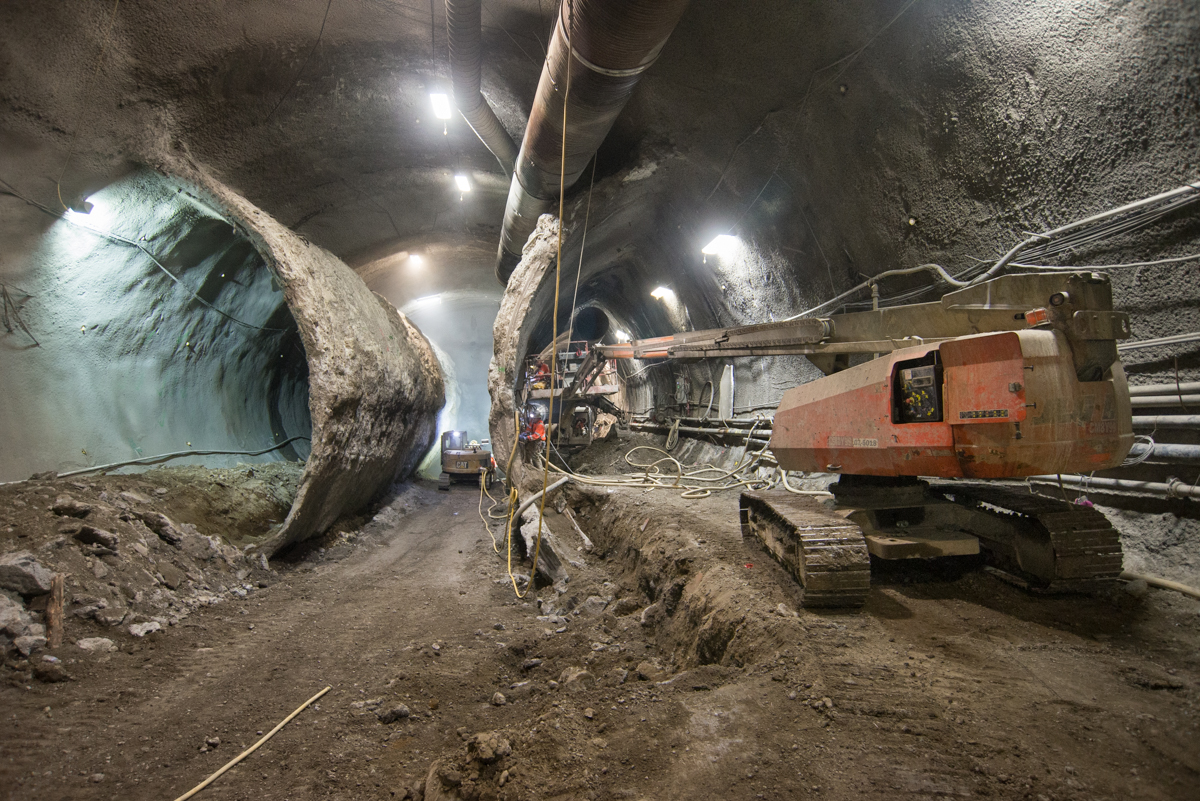 Looking south in the future Chinatown Station crossover cavern, only a relatively small portion of the shotcrete walls remain from excavation work, before the cavern will be fully mined out. Central Subway | Project Advancement 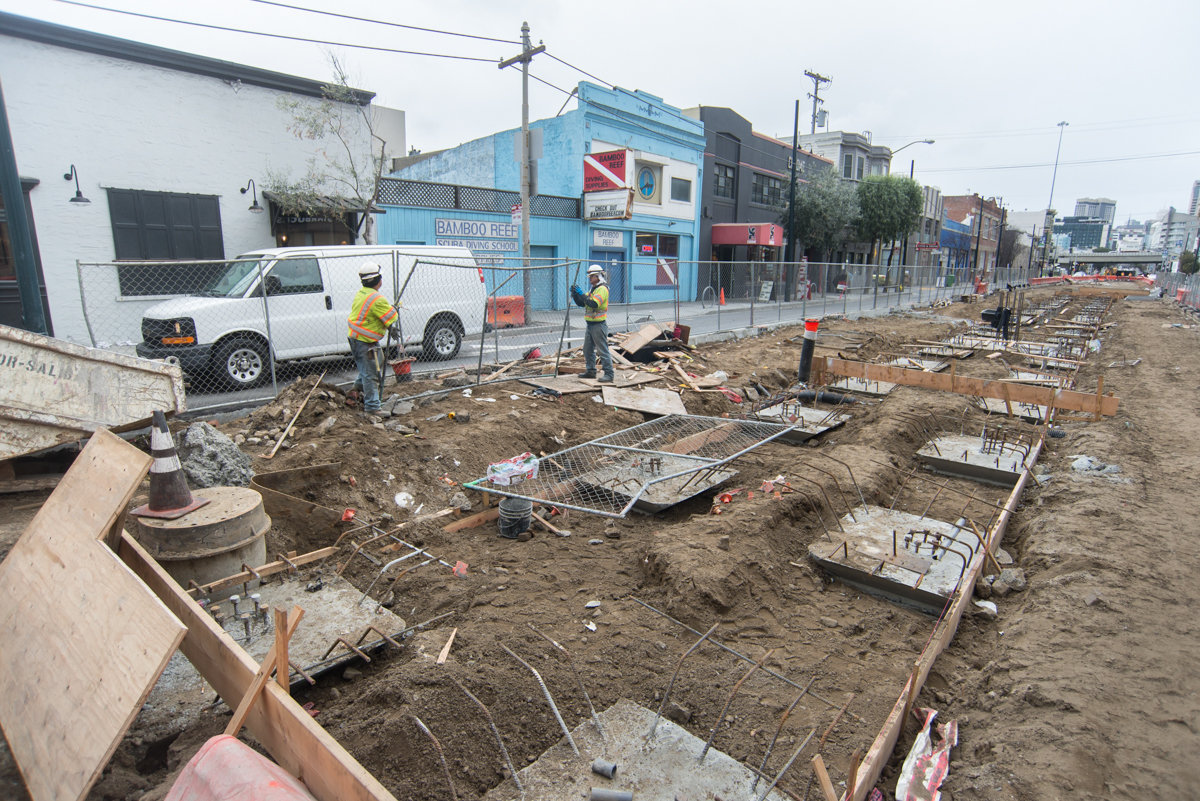 A section of safety fence is moved into position along the edge of the 4th and Brannan surface station work area, where foundation pile caps have recently been constructed. Surface Station, Trackwork and Systems Work along 4th Street between Bryant Street and King Street includes construction of a surface station between Bryant Street and Brannan Street. The construction team is upgrading utilities and trackwork on 4th Street between the tunnel portal at Bryant Street and the connection with the existing light rail system at King Street. 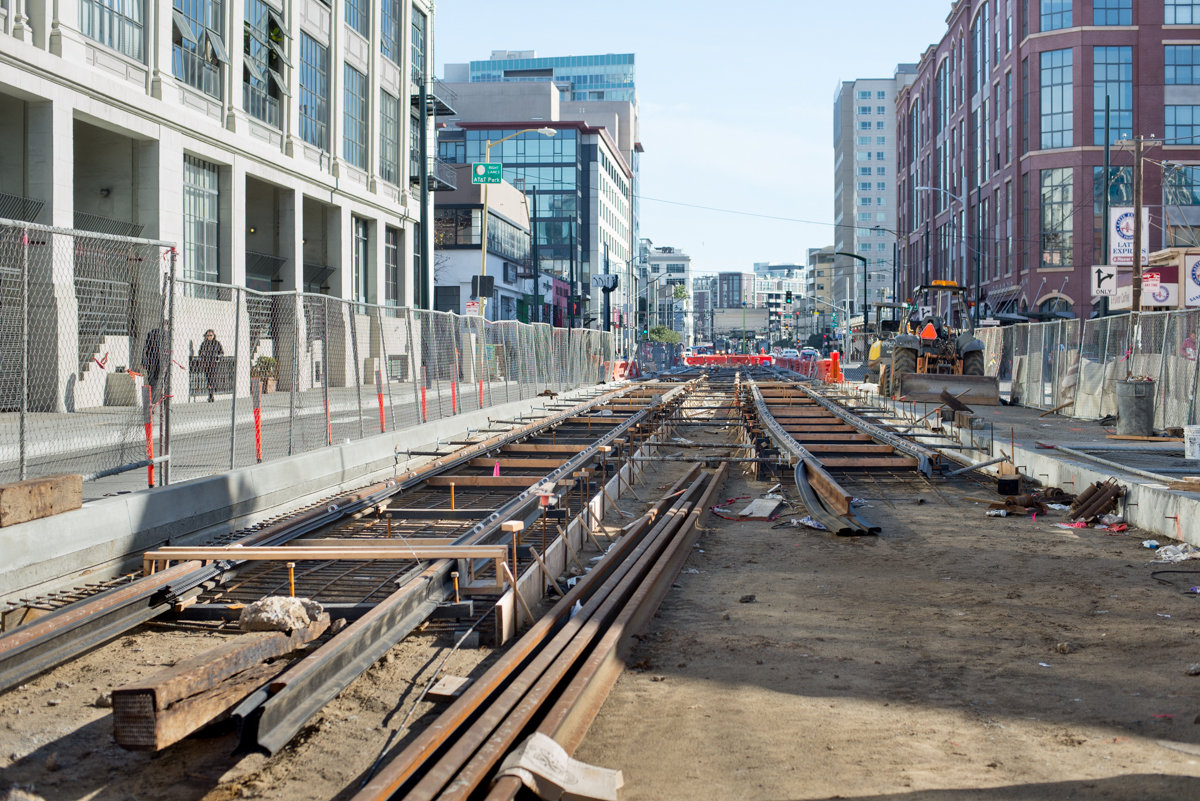 The dual trackway of the surface portion of the alignment is being constructed between Townsend and Brannan, on 4th Street. 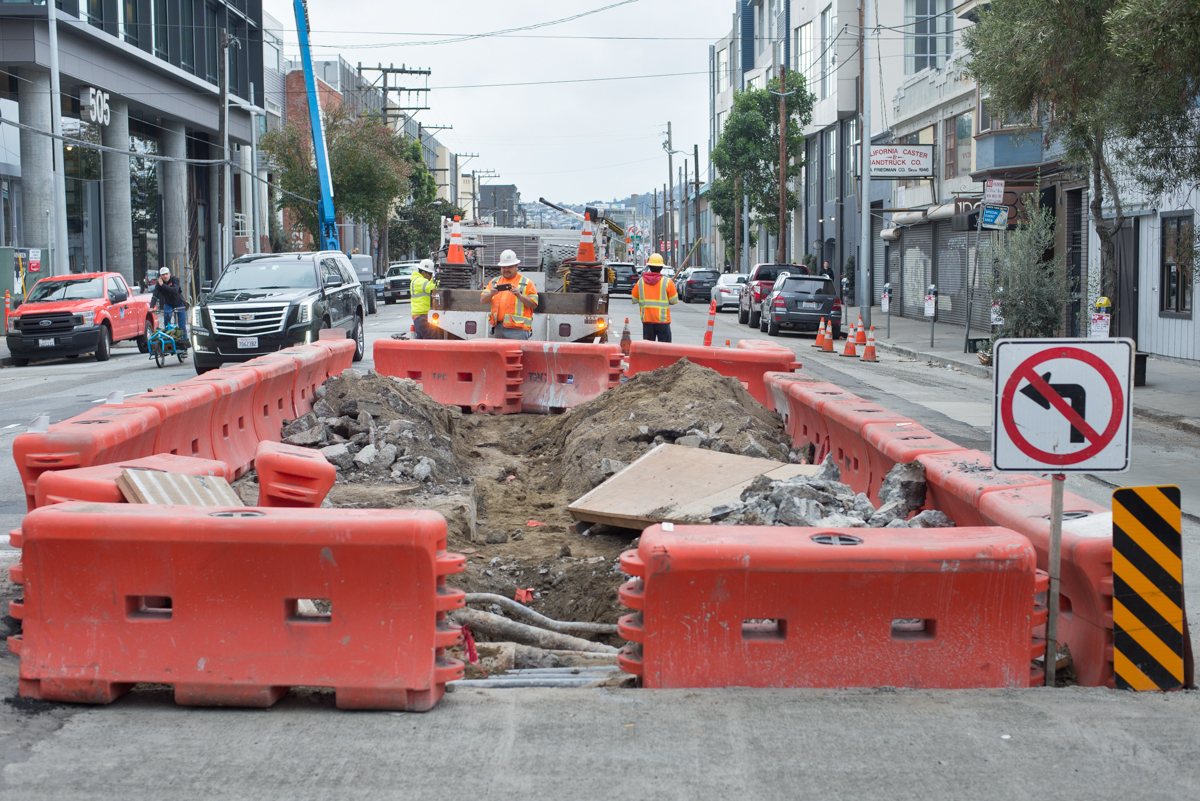 Workers observe utility upgrade work on the west side of the 4th and Brannan intersection. Overview

What: Street and sidewalk restoration
Time: 7 a.m. - 5:30 p.m.
When: Monday to Saturday
Where: 4th Street between King and Welsh 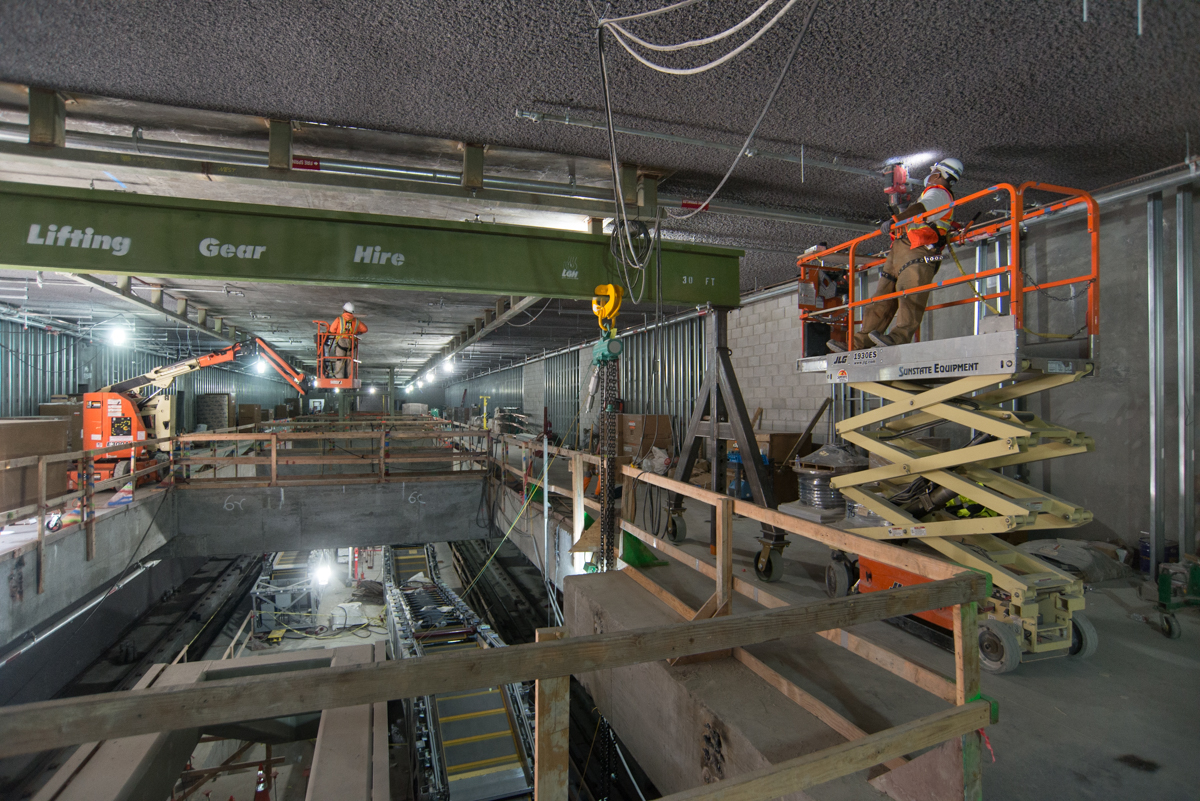 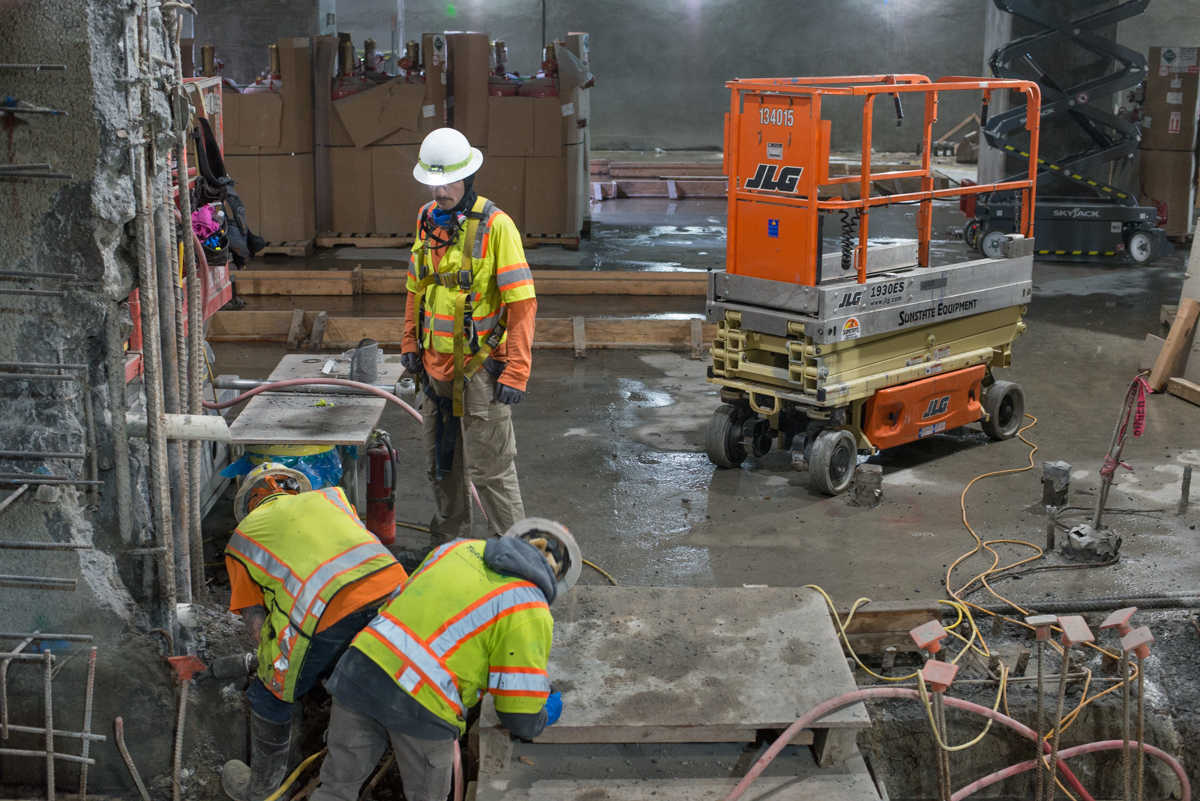 Workers chip away at concrete around the edges of a large opening on the slurry wall between the station platform and headhouse. 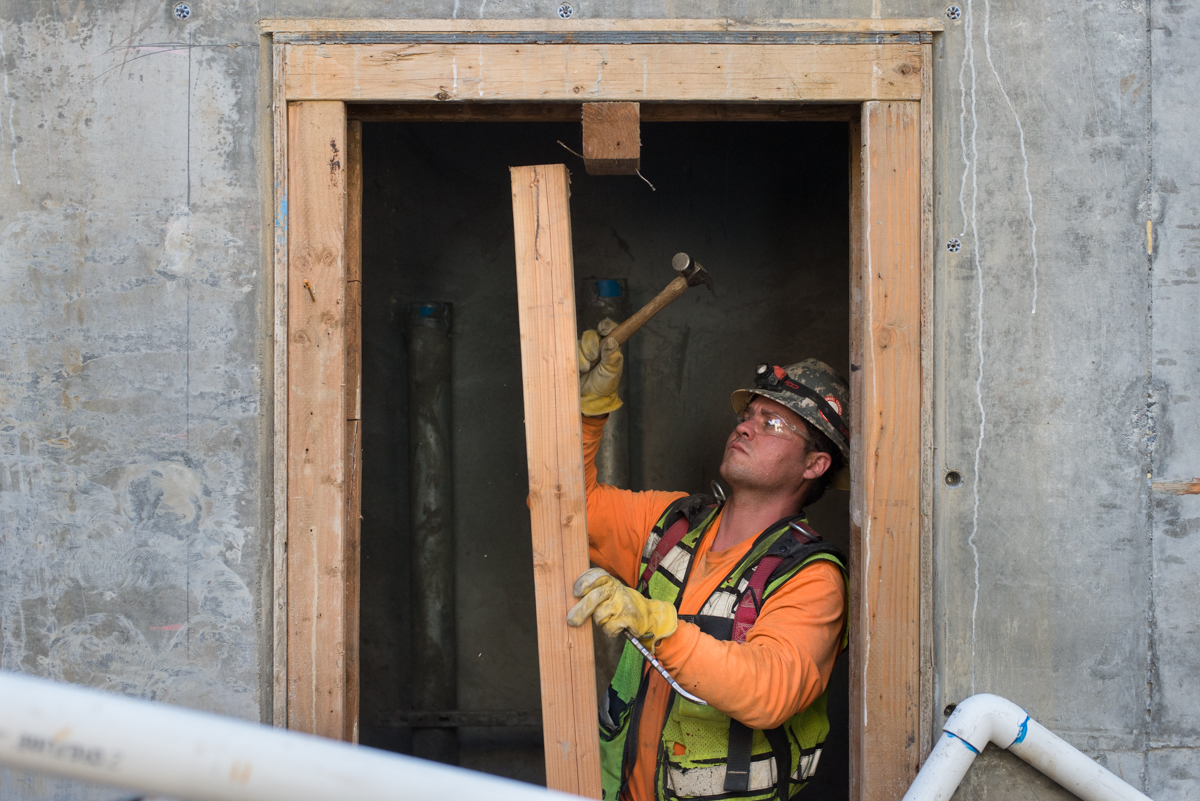 A carpenter removes pieces of concrete formwork for a doorway on the west side of the headhouse, concourse level. Overview 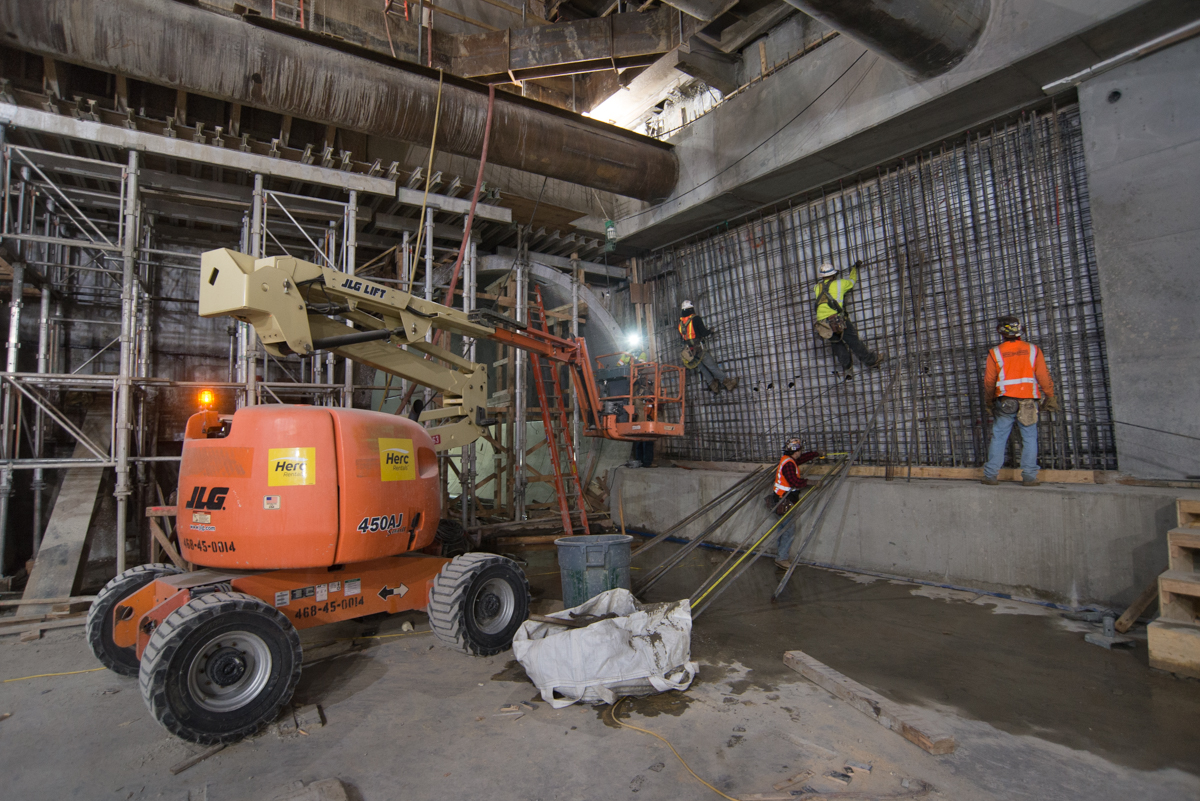 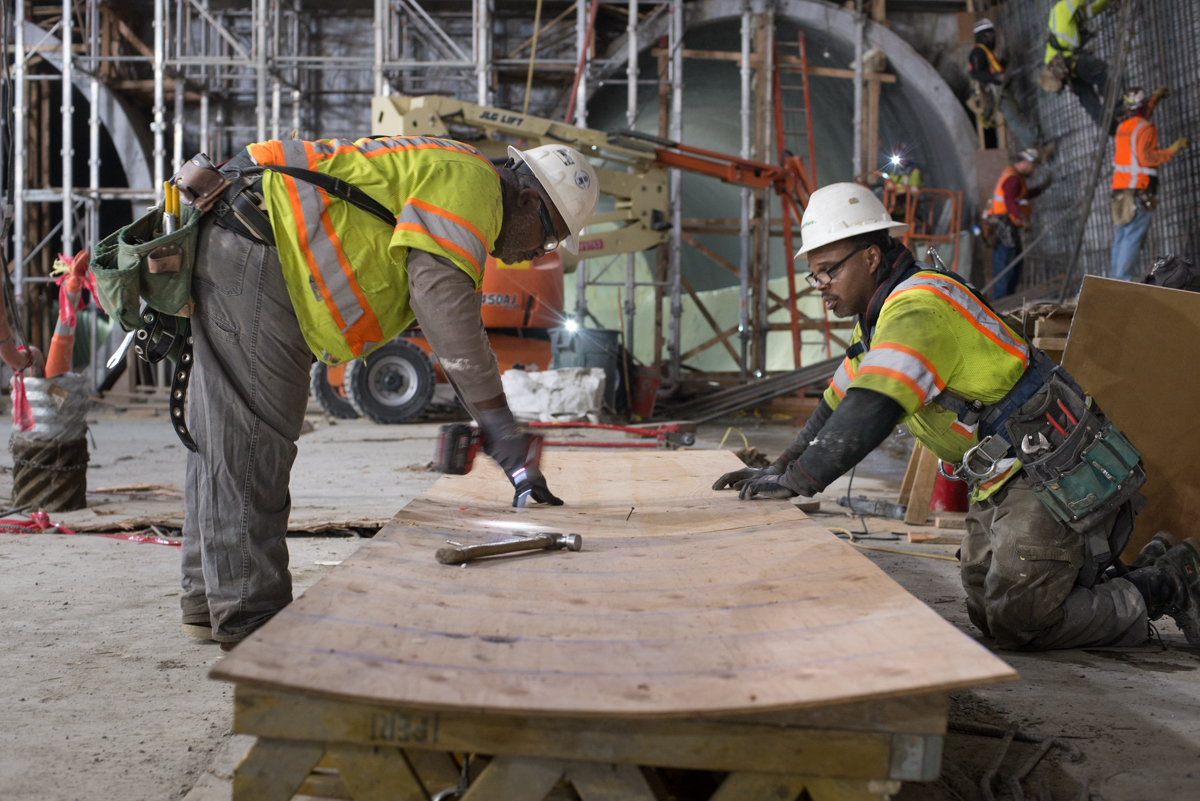 Carpenters build a concrete form as part of construction for scalloped wall surfaces down the length of the station platform. 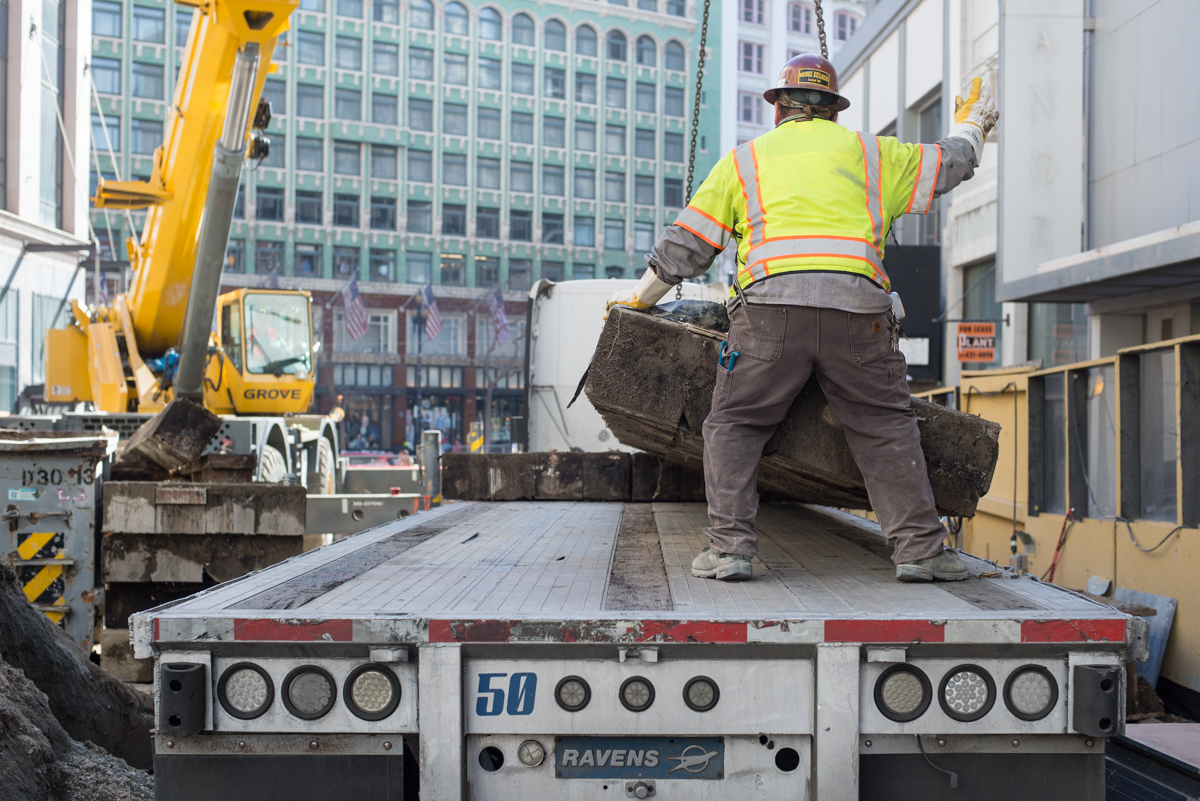 Wooden cribbing is received from a crane operator atop a flatbed truck inside the Stockton Street surface worksite north of Ellis. Overview 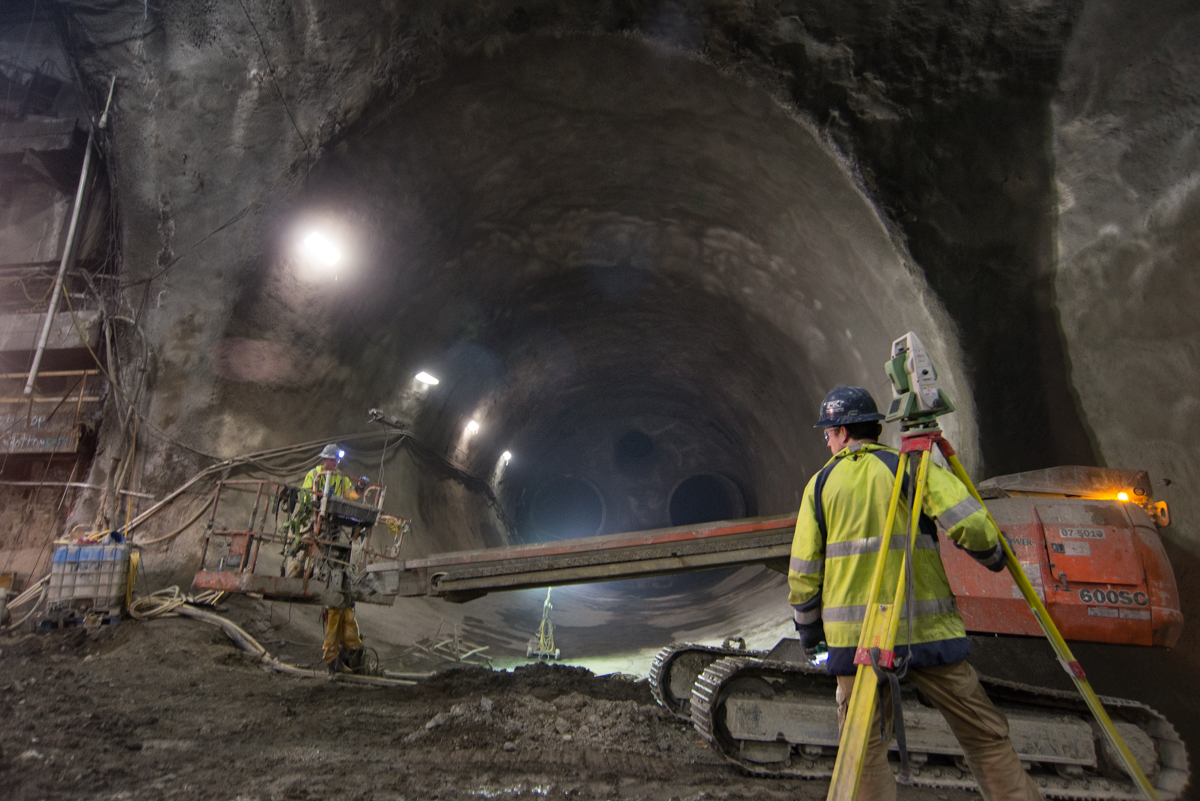 A surveyor pauses while two men move a boom lift into position inside the Chinatown station cavern, where the future station platform will be located. Chinatown Station The construction of Chinatown Station uses the sequential excavation method (SEM) along Washington Street and Stockton Street. The SEM provides a high degree of flexibility during construction and makes it possible to control virtually all kinds of ground conditions, thereby greatly reducing the risks of construction. This method of tunnel construction is used worldwide for small to large openings in a variety of ground types ranging from rock to soil. 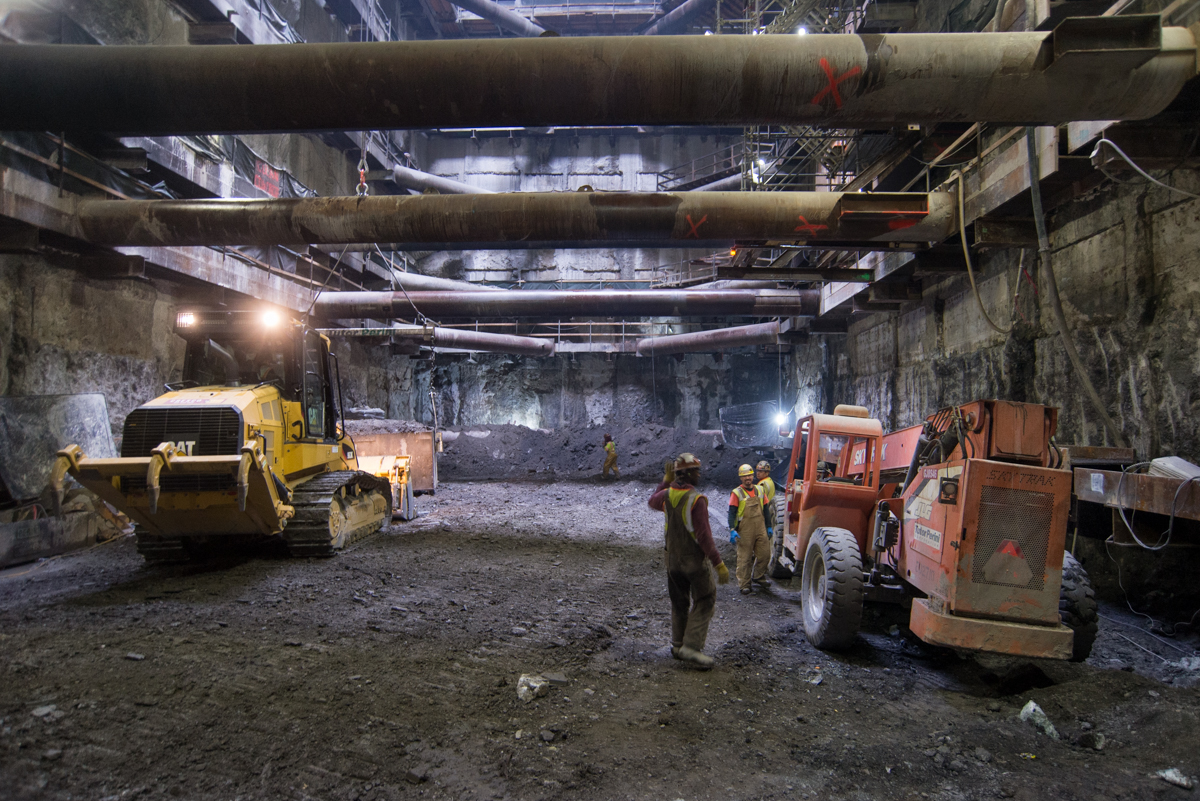 Looking south inside the headhouse, bulldozers fill a large steel bucket used to carry excavated spoils to the surface.. 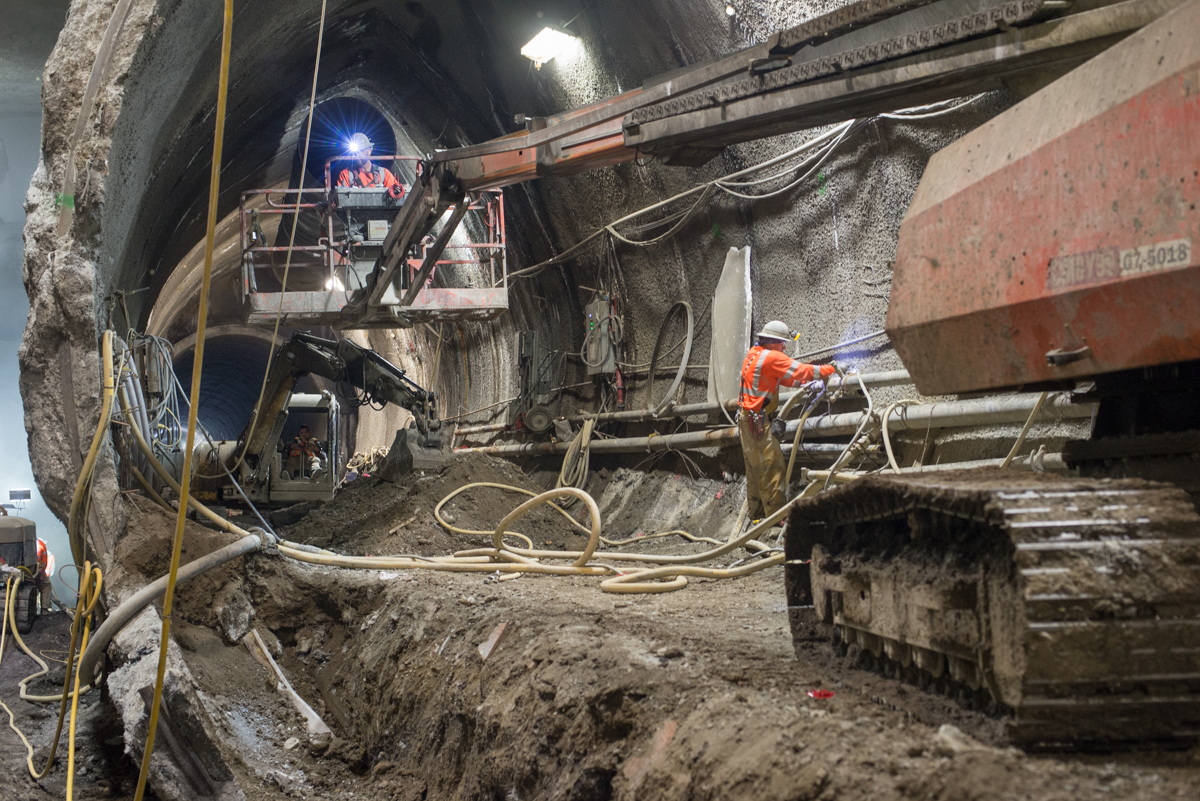 Workers continue excavation work in the remaining portion of the south cavern, where the future crossover cavern will be located. Overview