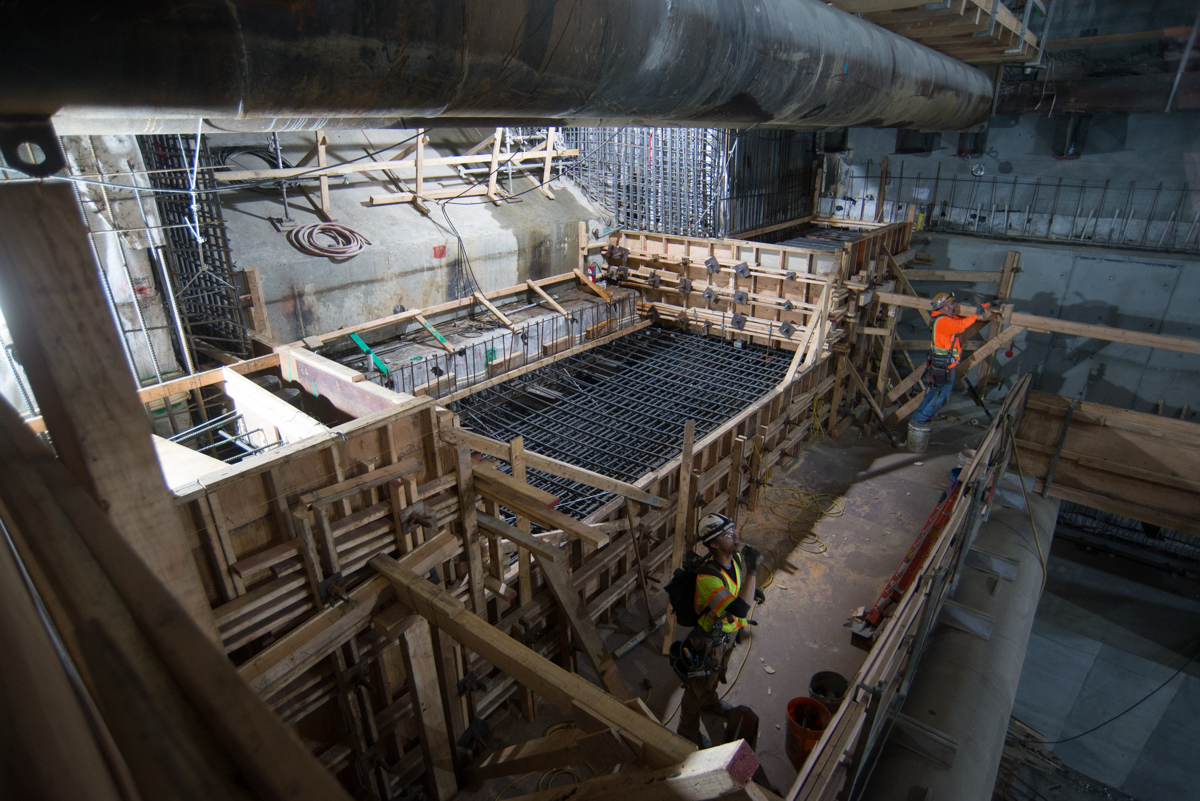 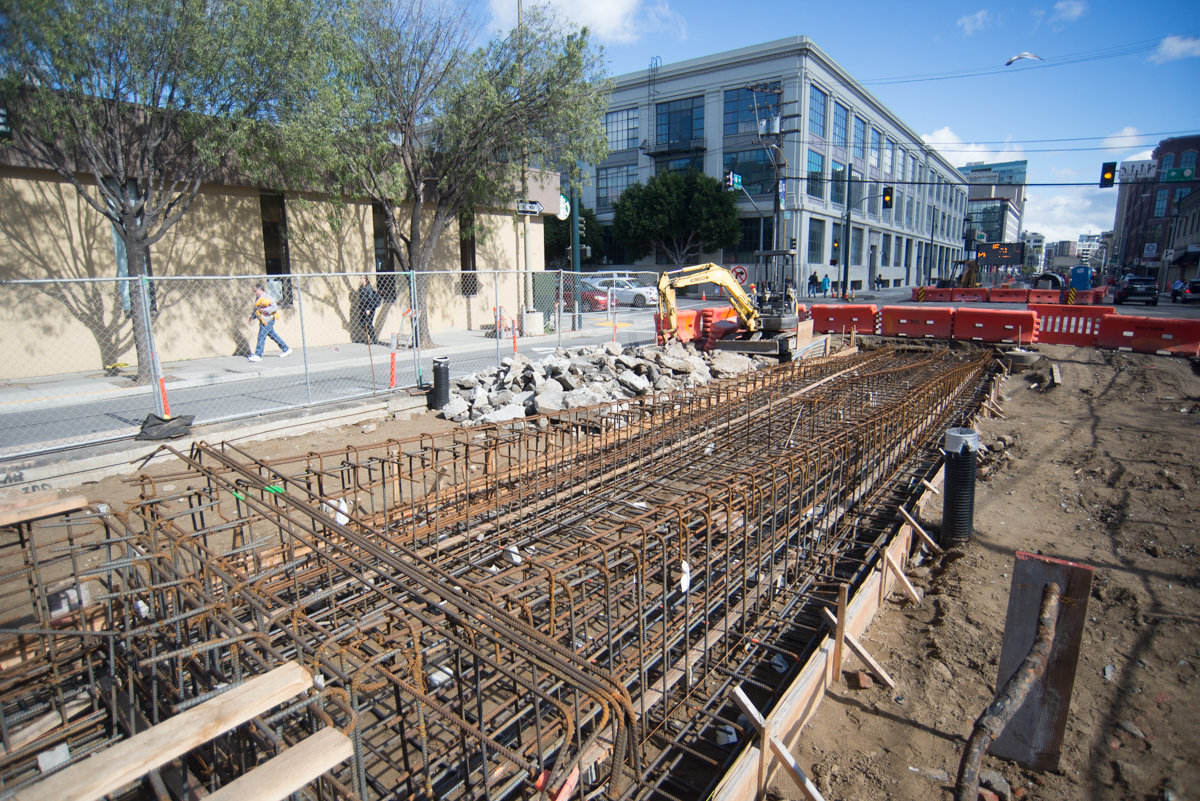 Rebar cages slowly descend down toward the crosswalk at Brannan, marking a future pedestrian ramp at the south end of the 4th and Brannan surface station platform. Surface Station, Trackwork and Systems Work along 4th Street between Bryant Street and King Street includes construction of a surface station between Bryant Street and Brannan Street. The construction team is upgrading utilities and trackwork on 4th Street between the tunnel portal at Bryant Street and the connection with the existing light rail system at King Street. 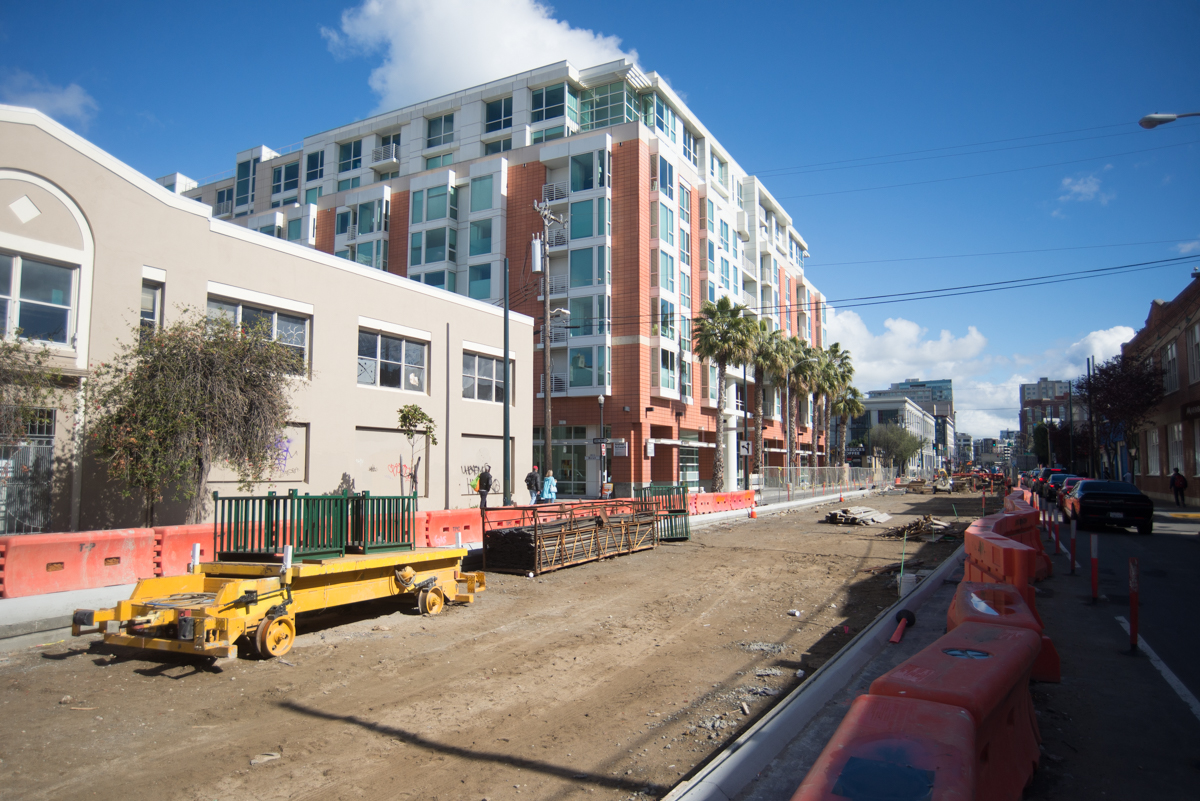 Some construction equipment is temporarily stored inside the work zone north of the 4th and Brannan surface station platform area. 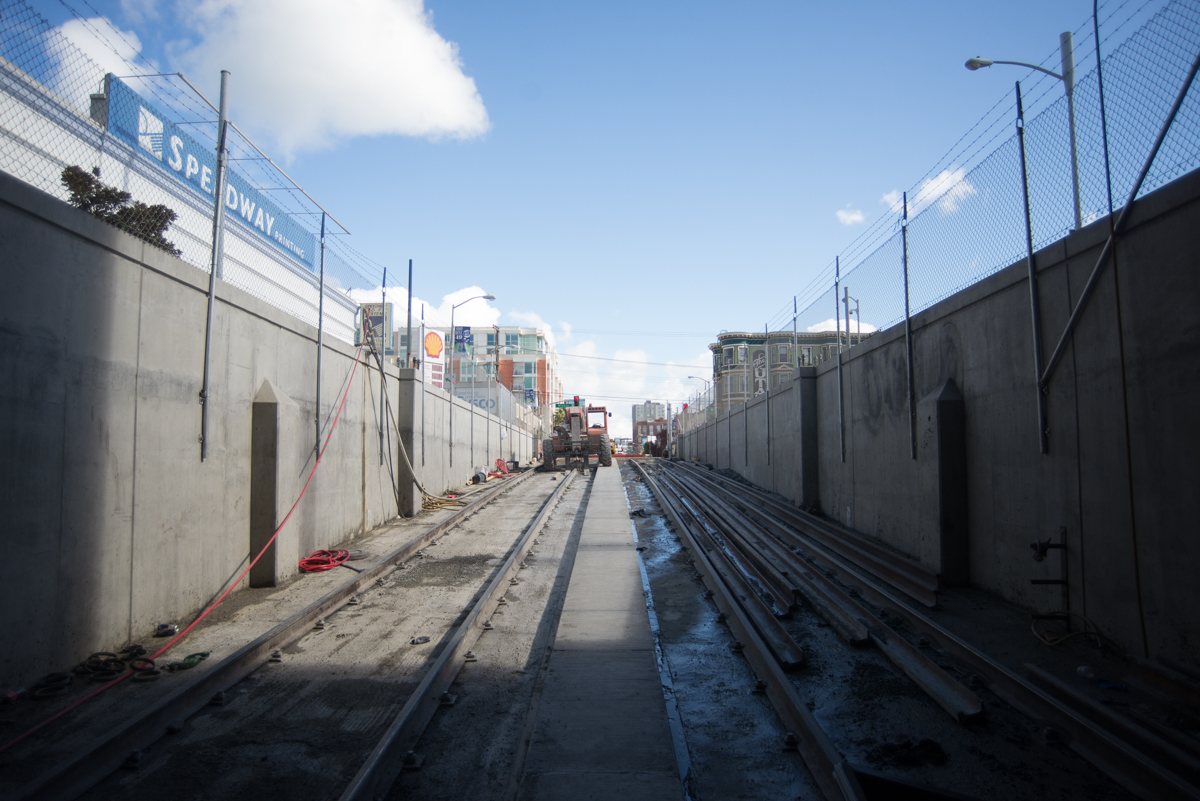 Steel rails wait in storage inside the tunnel portal as work to add walkways and utilities is ongoing inside the twin subway tunnels to the north. Overview 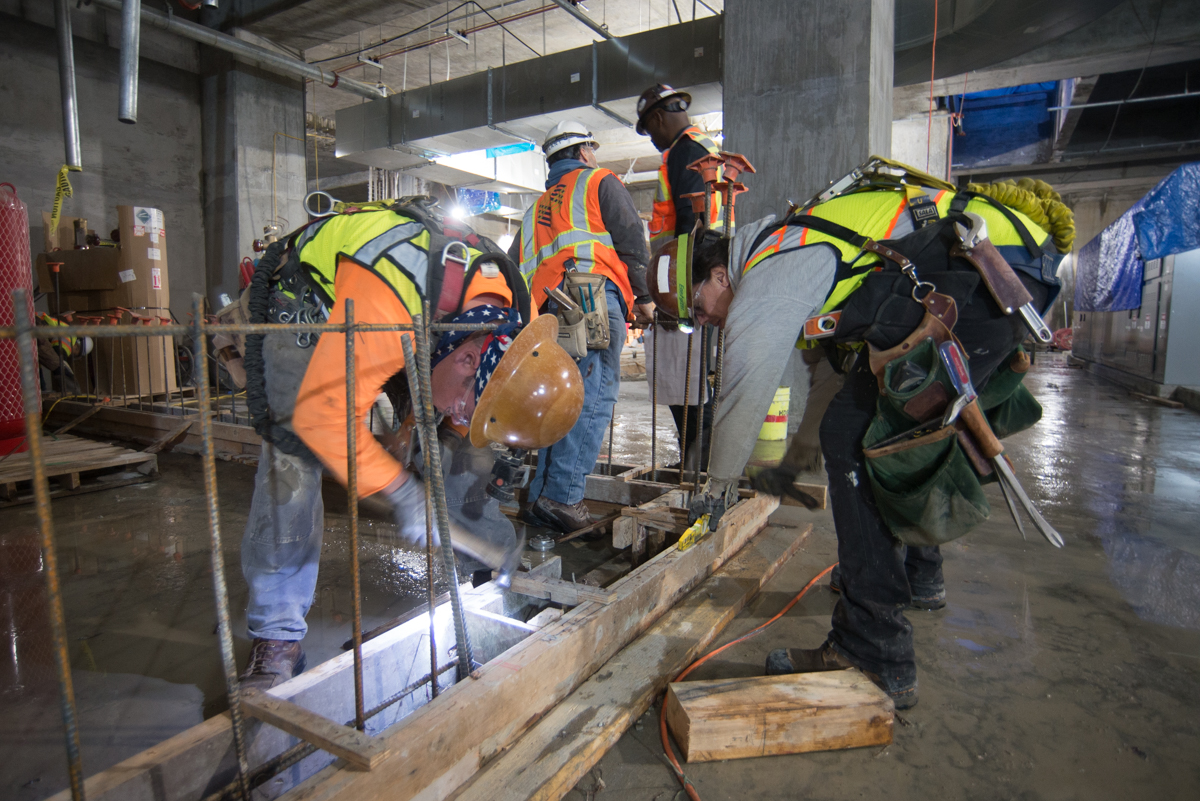 Carpenters build a concrete form for the footing of a future wall inside the platform level of the Yerba Buena/Moscone Station headhouse, where electrical equipment is being placed. Yerba Buena | Moscone Station 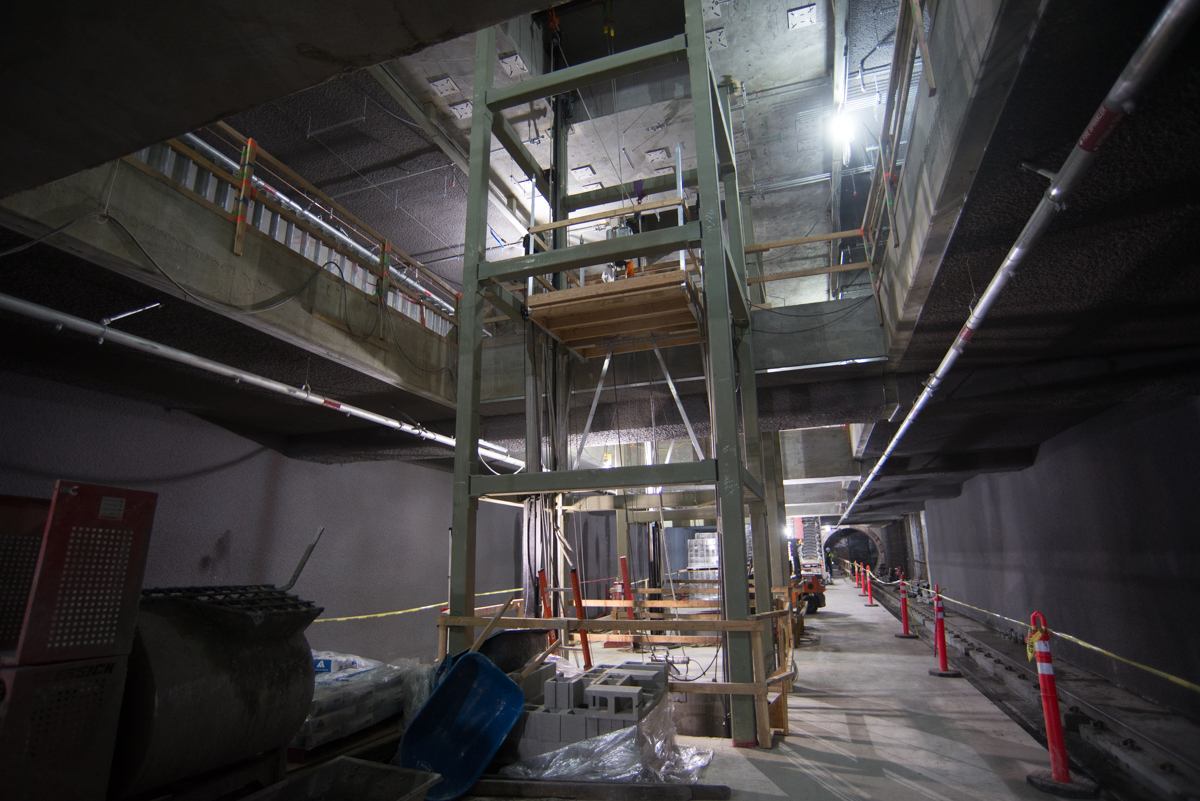 Workers have begun installing some initial machinery and cabling for the dual elevators inside the station box. 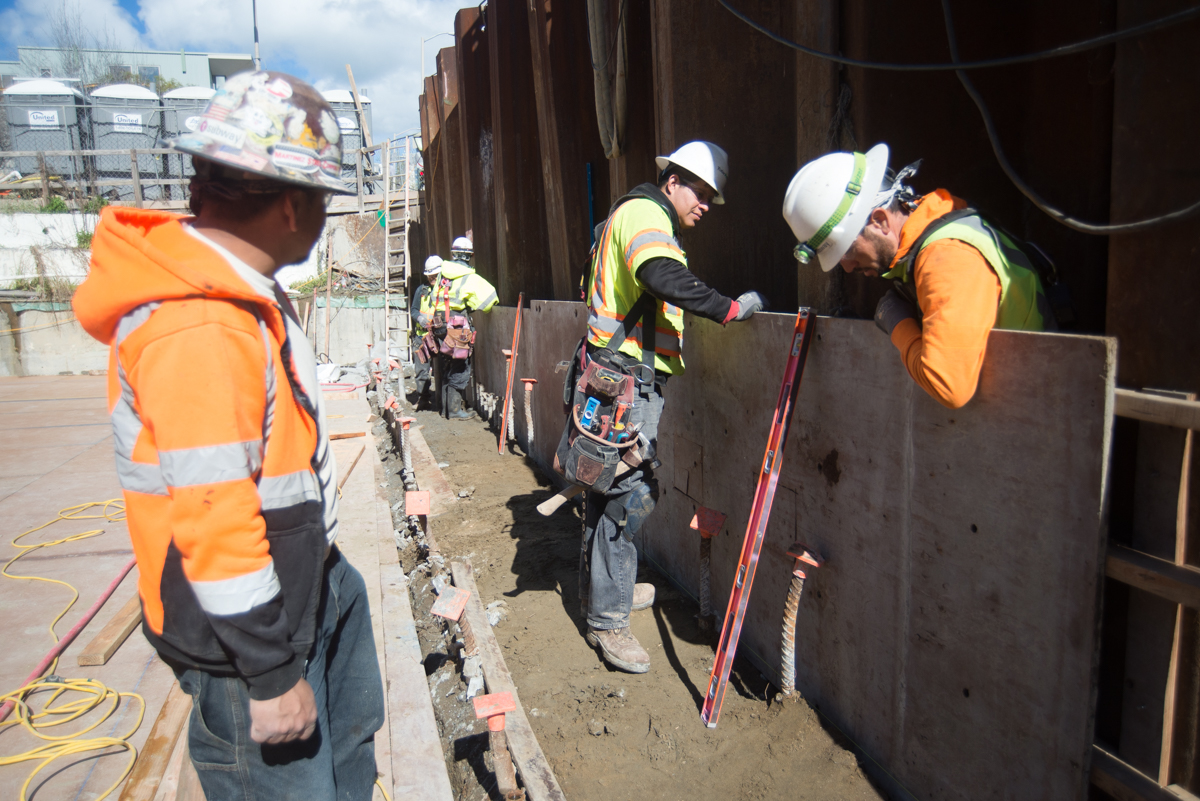 A team of carpenters constructs the initial stages of a concrete form for the station headhouse roof slab adjacent to Folsom Street. Overview 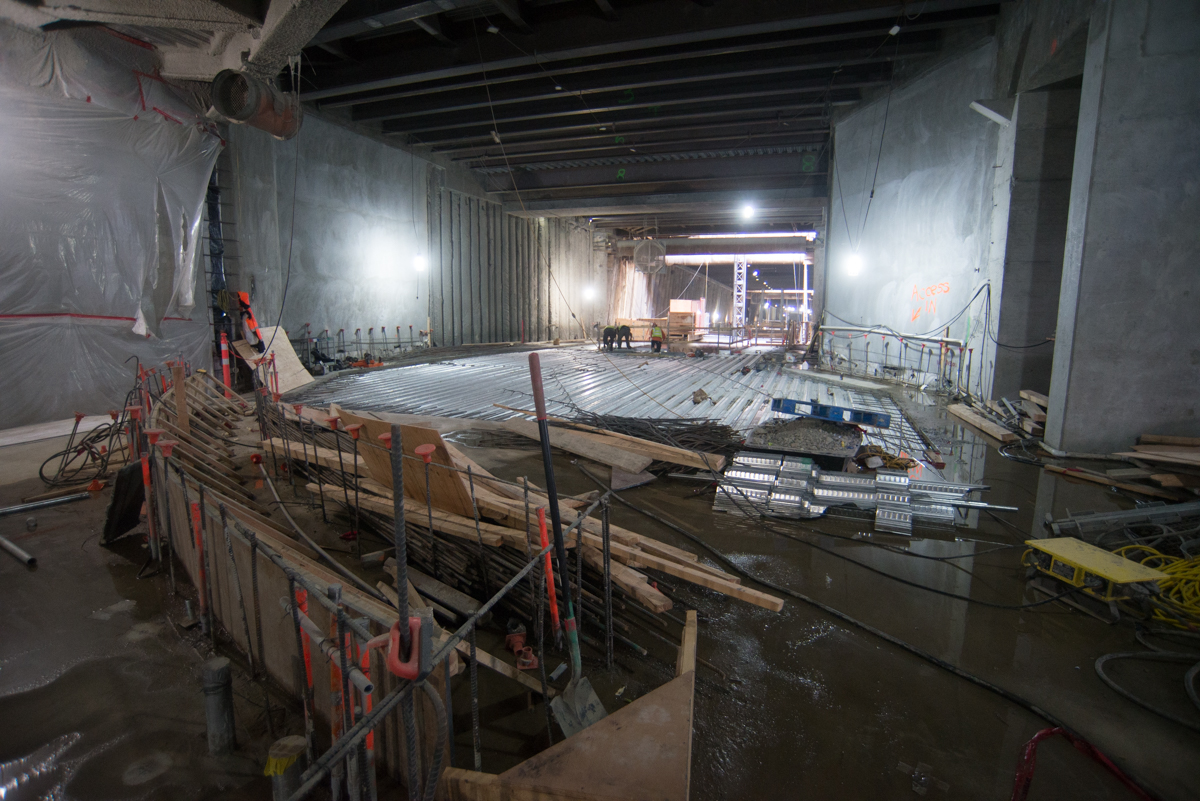 Concrete forms for the based of a curved wall at the Union Square entrance can be seen with workers installing corrugated steel and rebar for the future concourse level floor slab. Union Square | Market Street Station 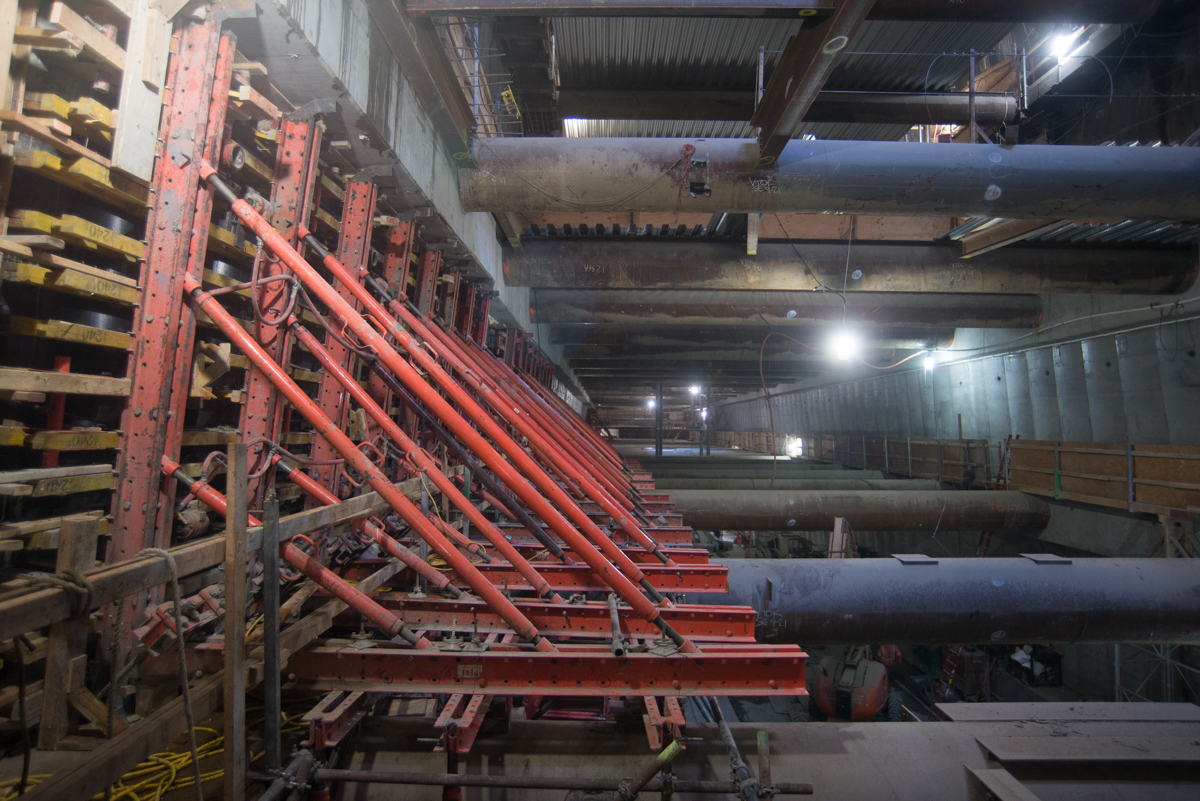 Massive concrete forms have been placed down the length of the station box, to create a scalloped wall feature similar to a pile wall. 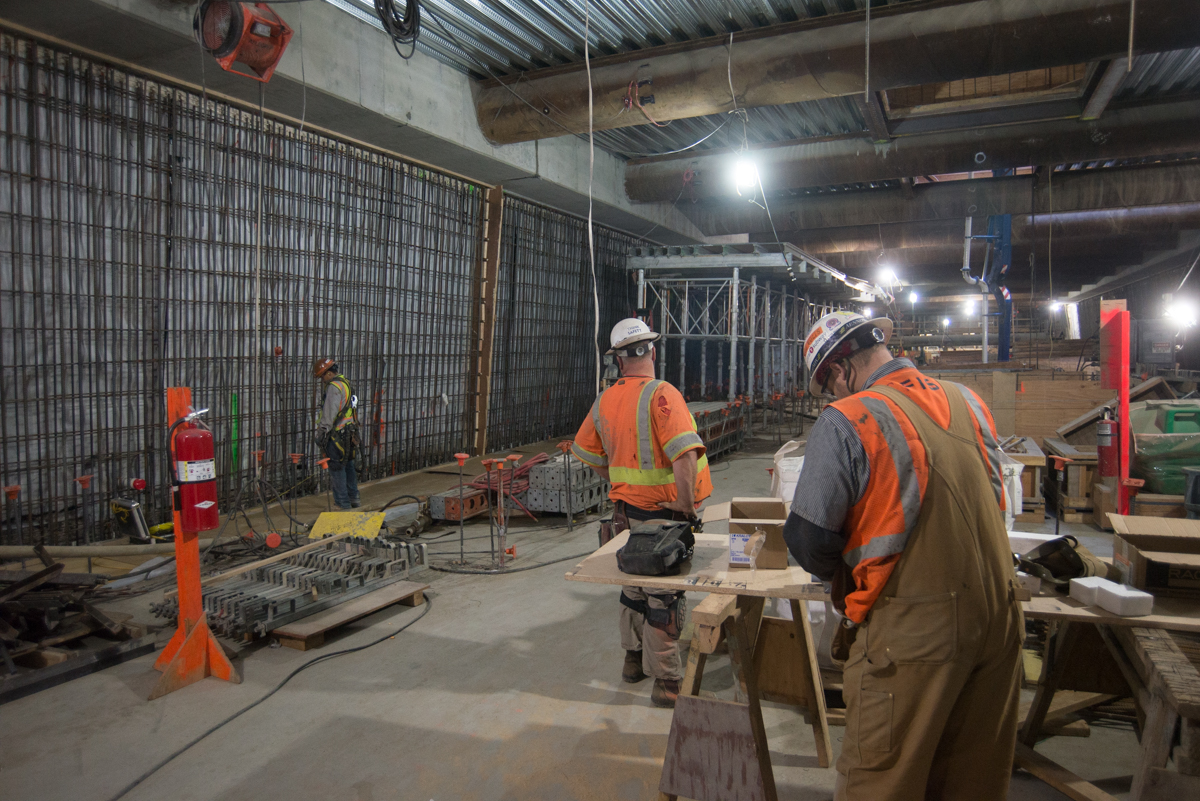 Finished reinforced concrete interior walls continue to be built in the upper floors of the station box. Overview 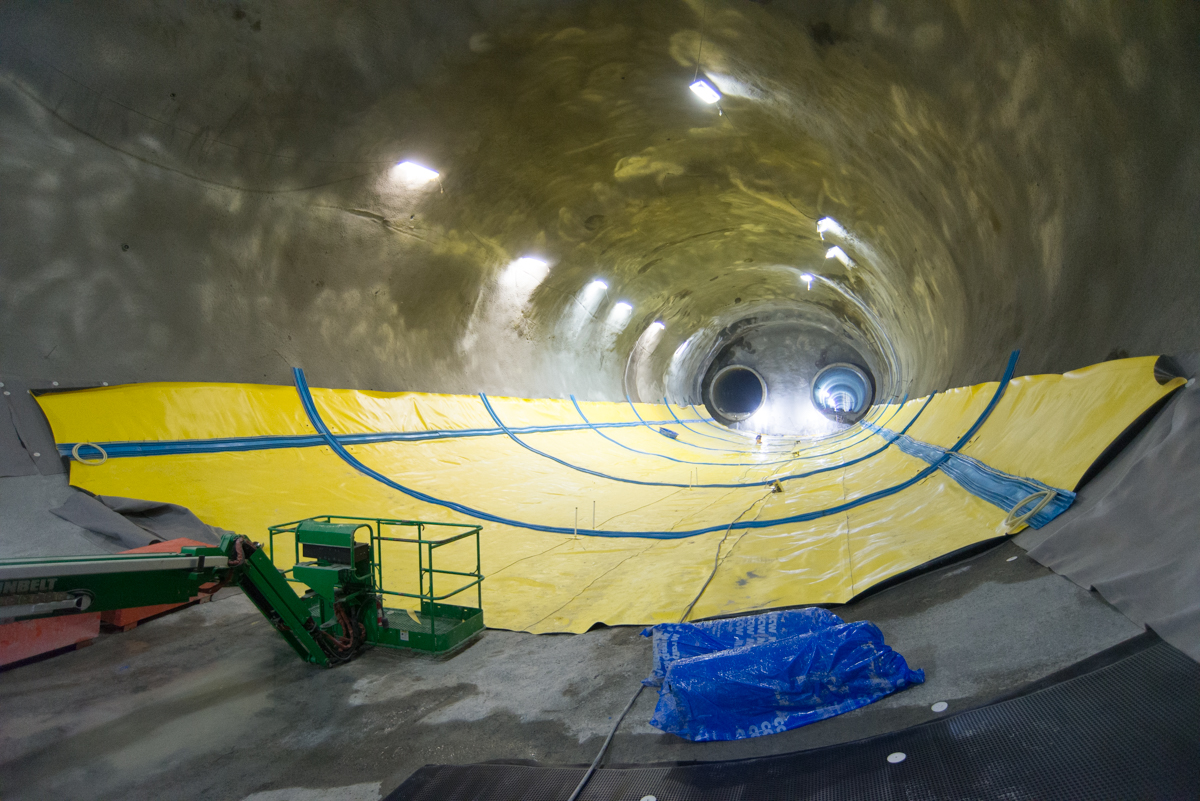 Sheets of waterproofing membrane are being placed inside the track crossover cavern, connected just to the south of the Chinatown platform cavern. Chinatown Station The construction of Chinatown Station uses the sequential excavation method (SEM) along Washington Street and Stockton Street. The SEM provides a high degree of flexibility during construction and makes it possible to control virtually all kinds of ground conditions, thereby greatly reducing the risks of construction. This method of tunnel construction is used worldwide for small to large openings in a variety of ground types ranging from rock to soil. 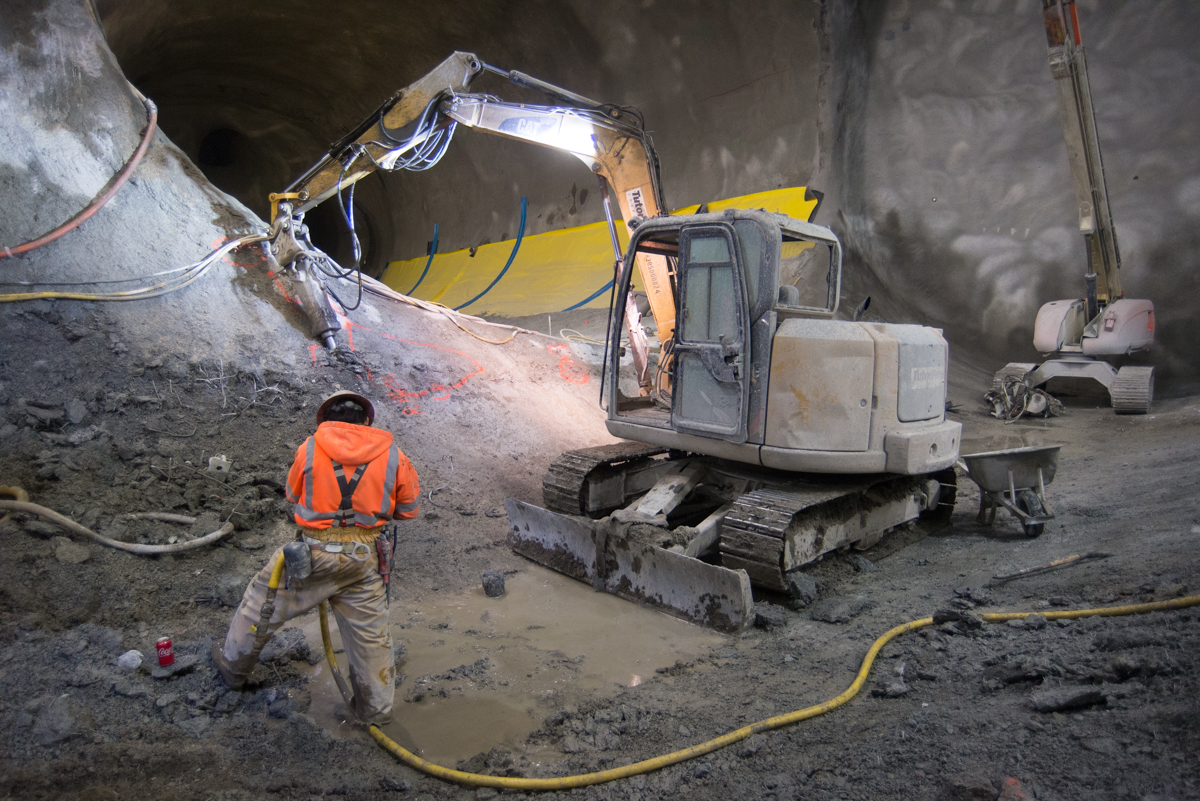 An excavator fitted with a jackhammer works with an associate to keep dust down as excess shotcrete is removed from the cavern shell. 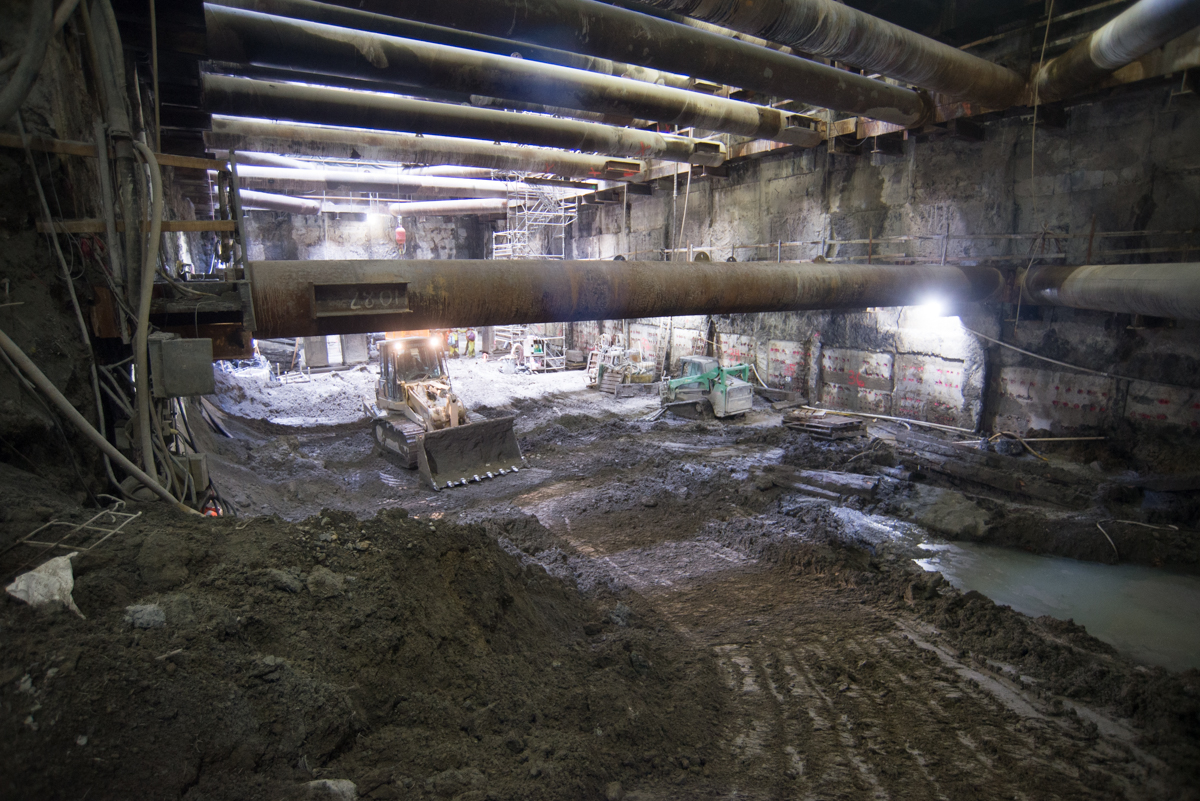