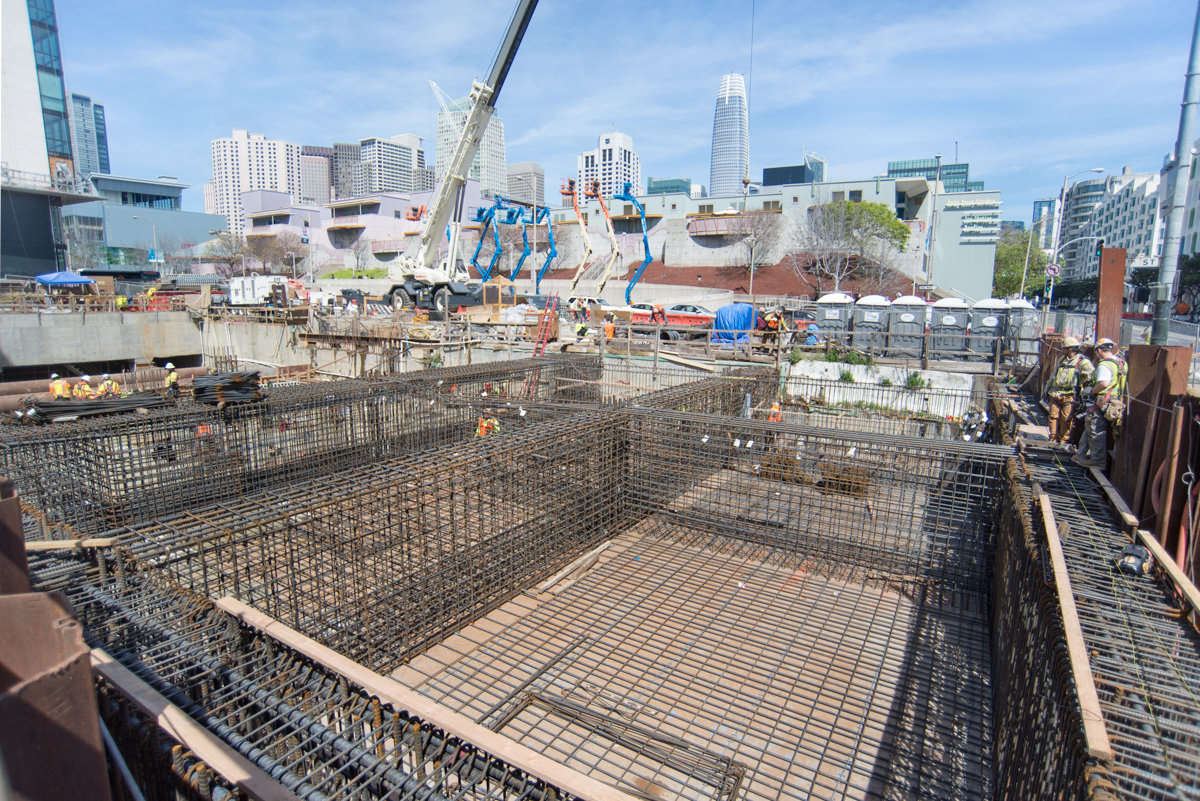 Massive rebar cages for a lattice of reinforced concrete beams are being assembled as part of roof slab construction for the Yerba Buena/Moscone Station headhouse. Central Subway | Project Advancement 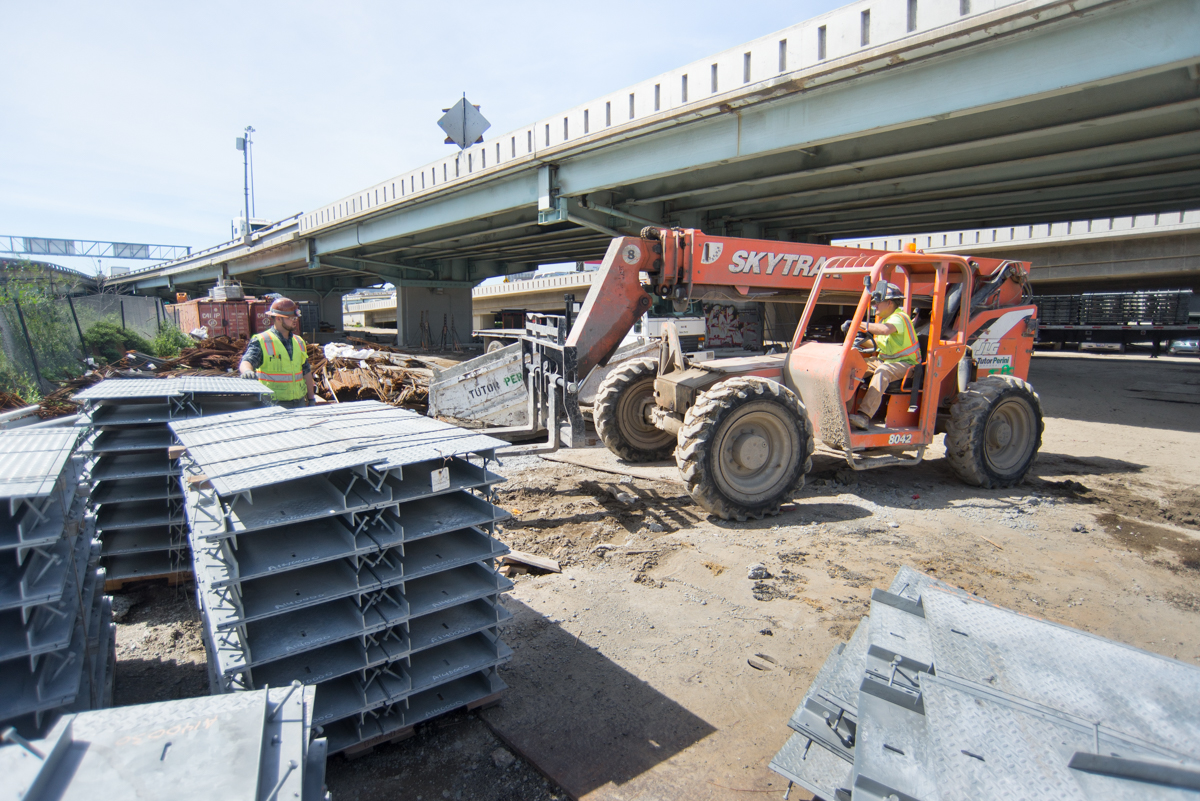 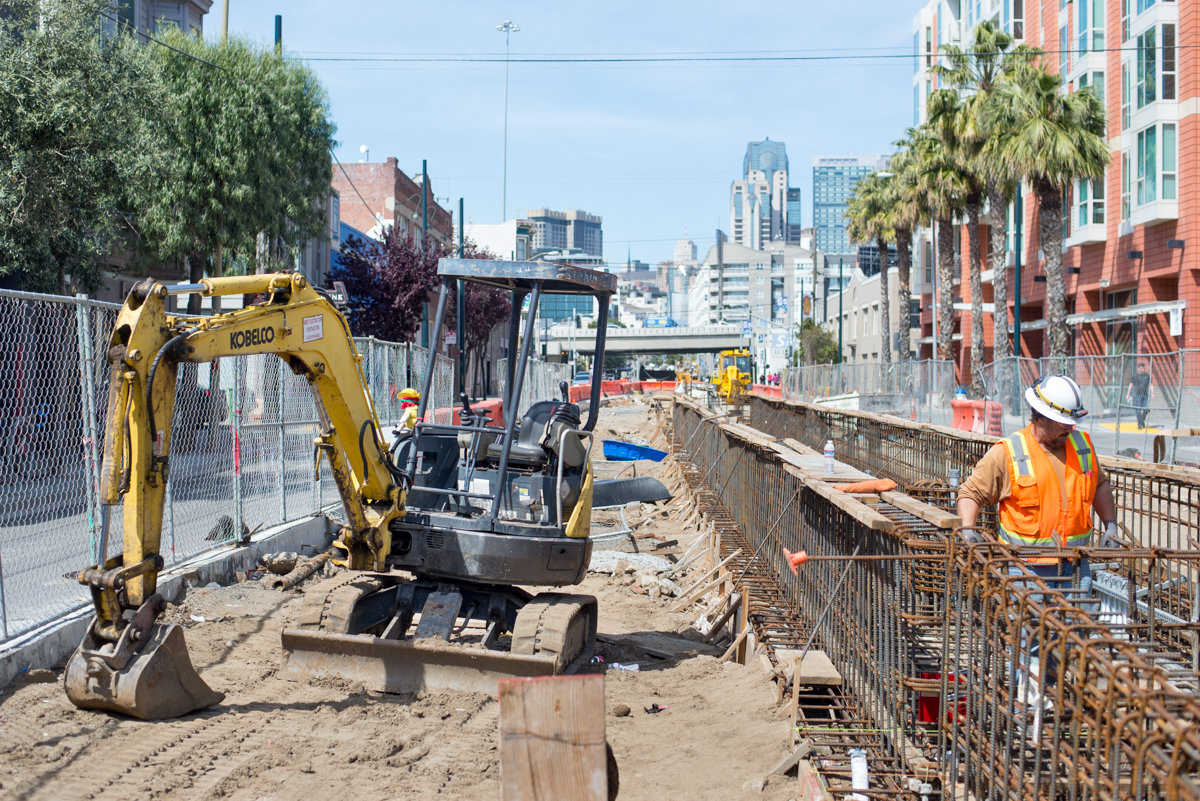 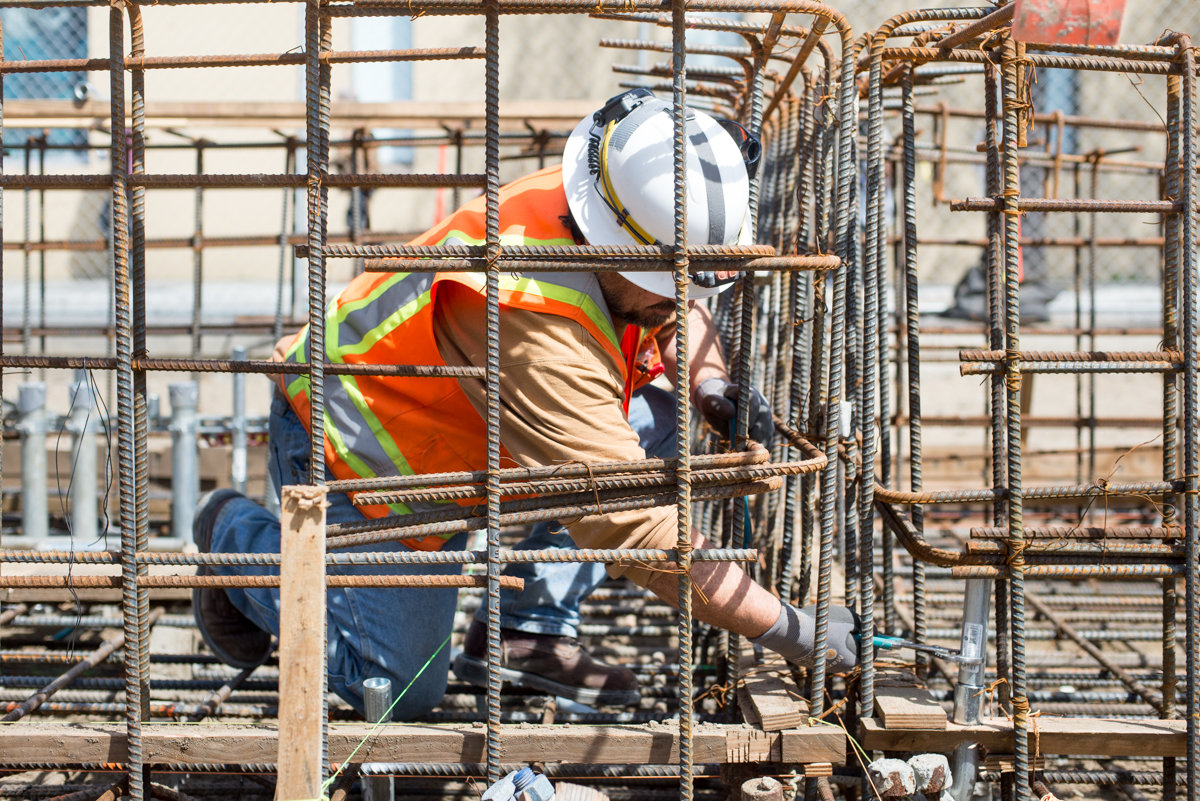 A worker adjusts a section of utility conduit as part of surface station construction at 4th and Brannan. Overview 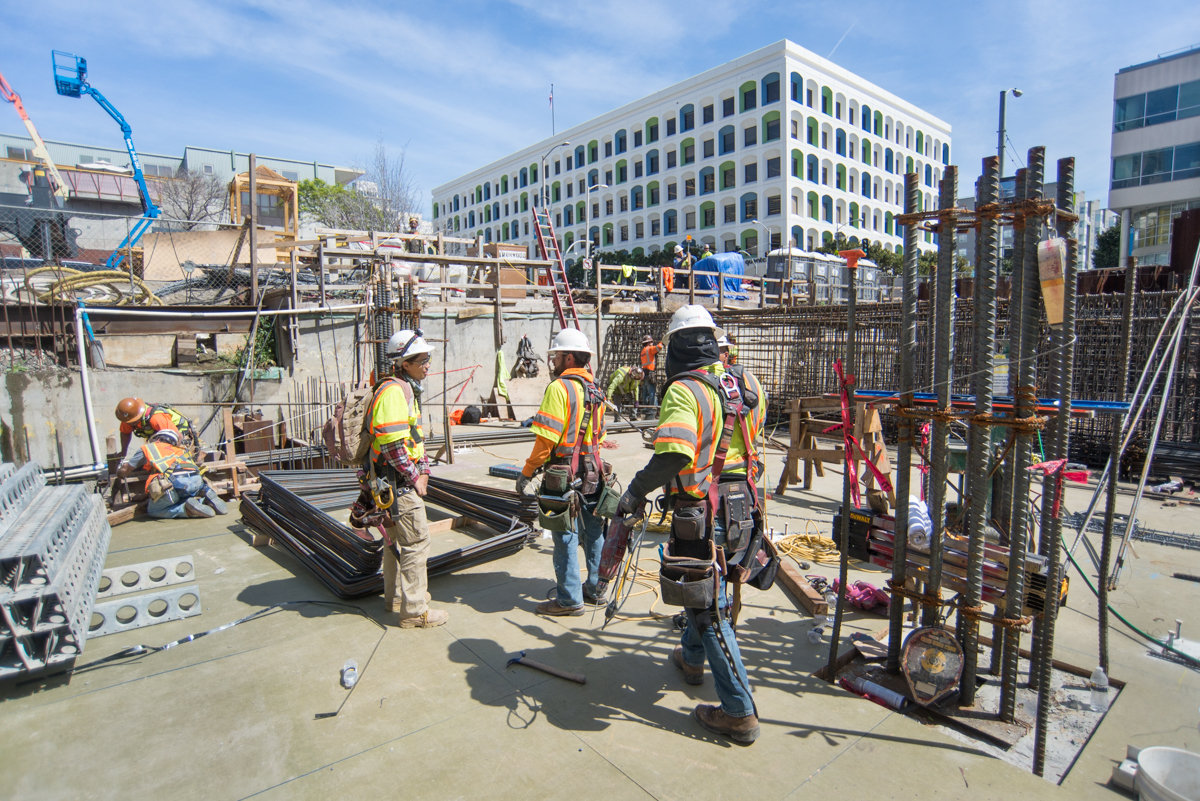 Large gauge rebar extends skyward from inside the future roof deck of thestation headhouse, which may be used as part of a future transit-oriented development. Yerba Buena | Moscone Station

Sewer replacement work continues at night at 4th and Howard streets. Work hours are 8 p.m. to 5 a.m.  The current traffic configuration from north of the station to Howard Street will remain, but may change in the coming weeks. Two through lanes are in place southbound 4th Street. Westbound traffic on Howard Street will be impacted. 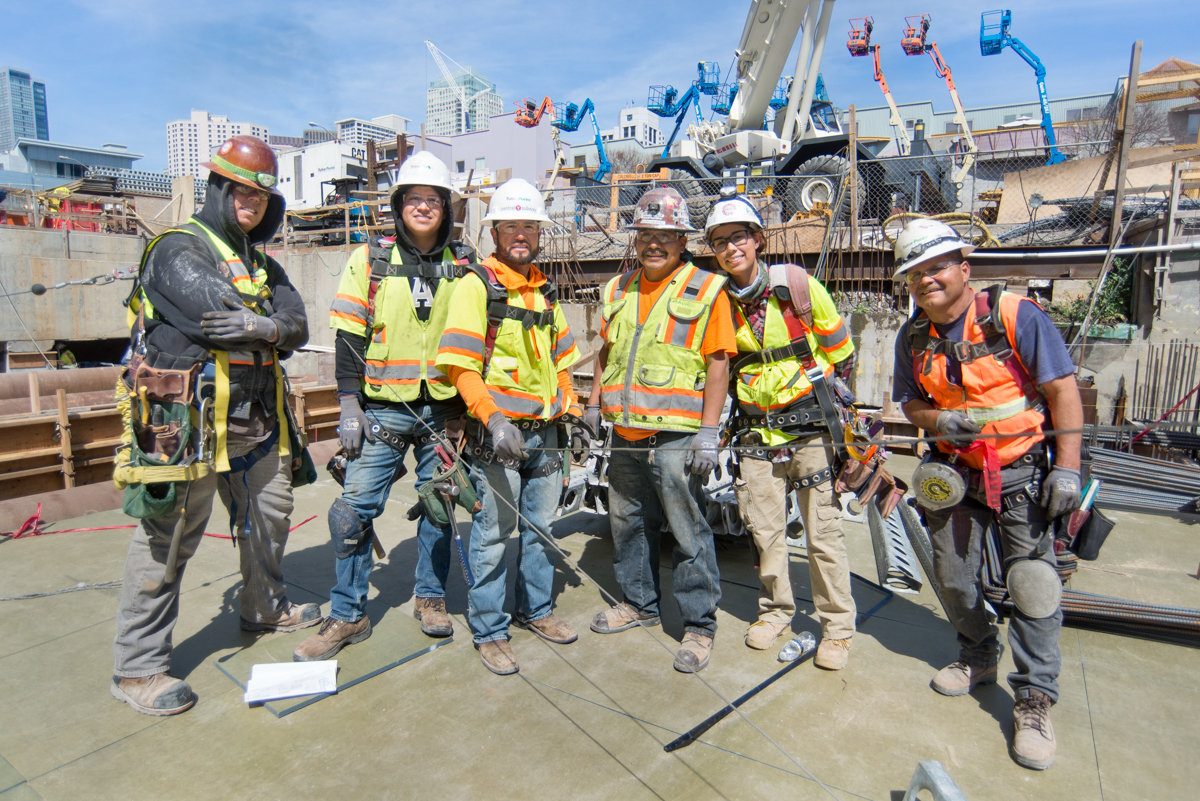 A crew poses for a photo atop the station headhouse roof slab concrete form, currently being constructed. 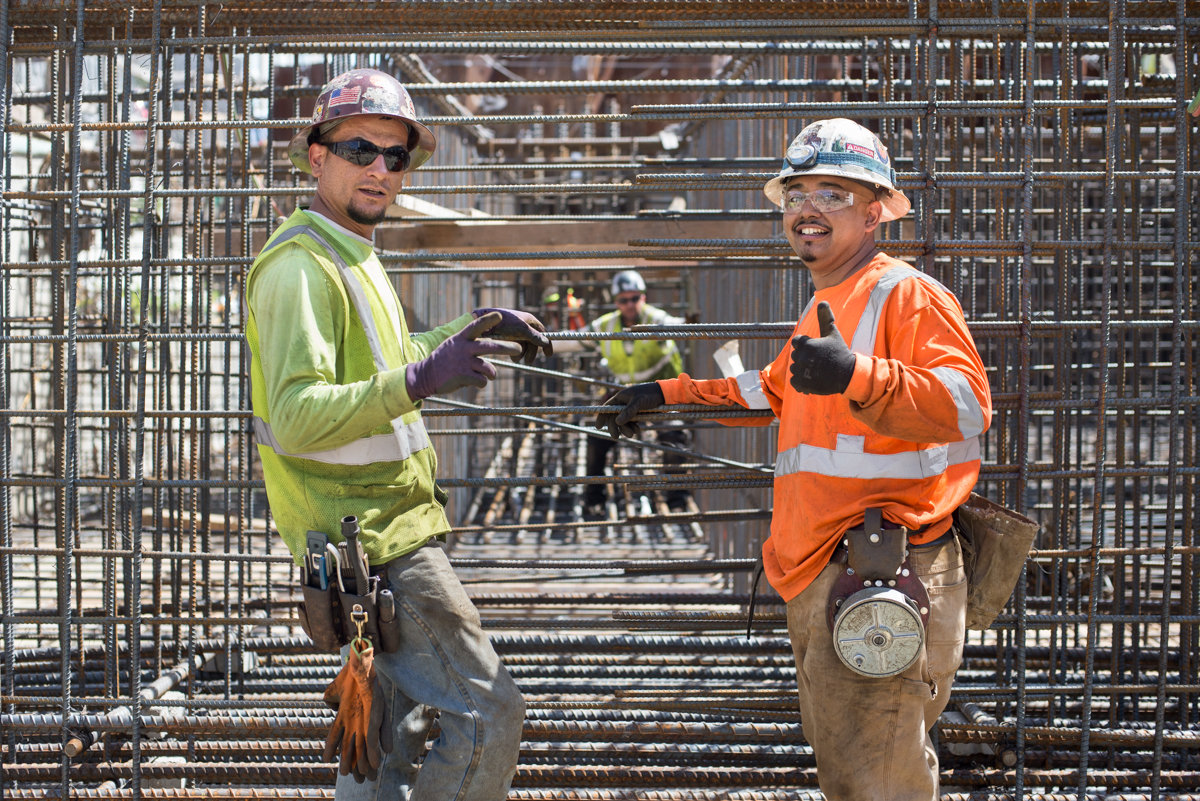 Workers assembling huge rebar cages atop the station headhouse give a thumbs-up on a hot March afternoon. Overview 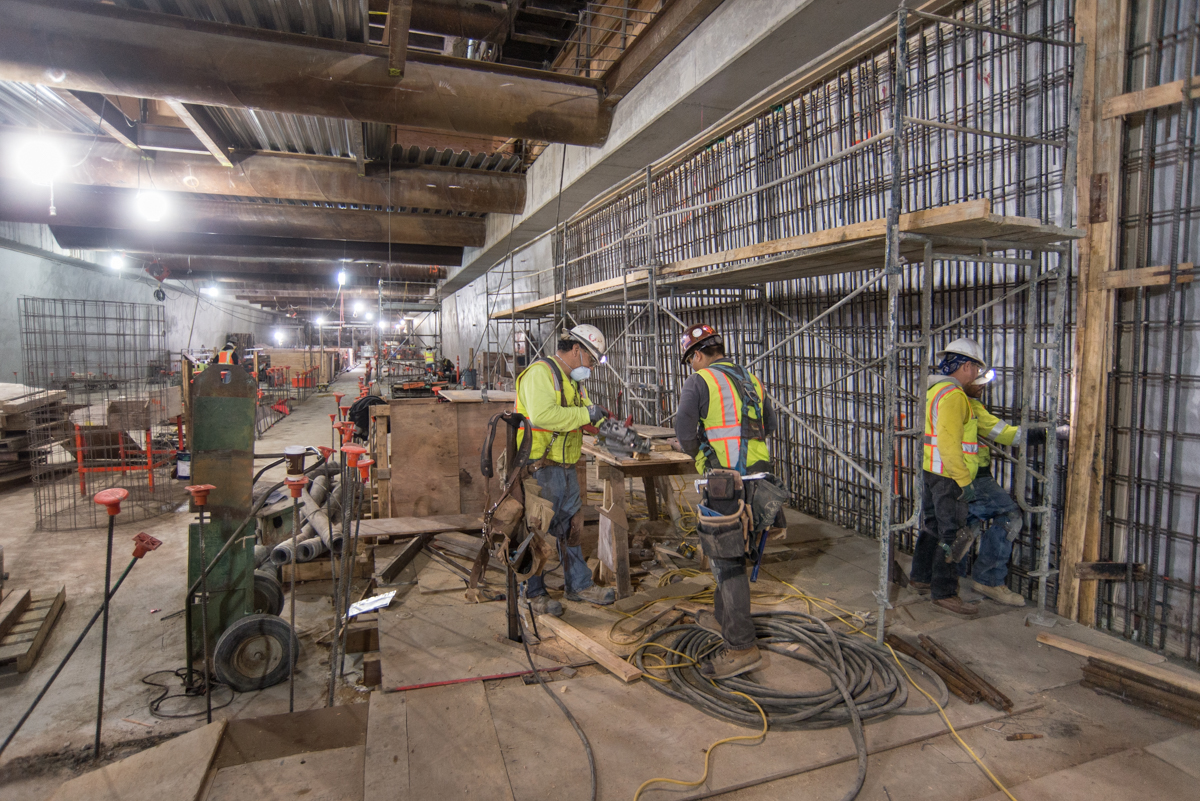 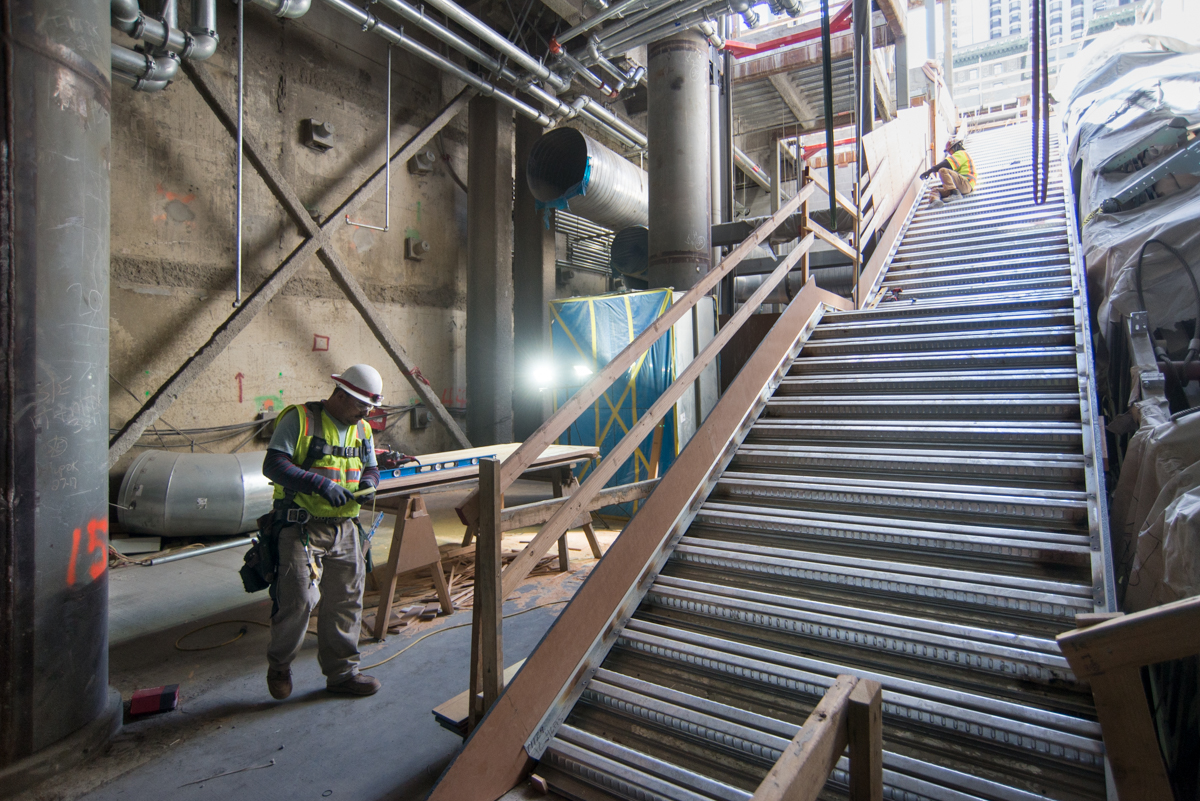 Carpenters work together to fashion temporary railings for the staircase inside the north station entrance at Union Square. 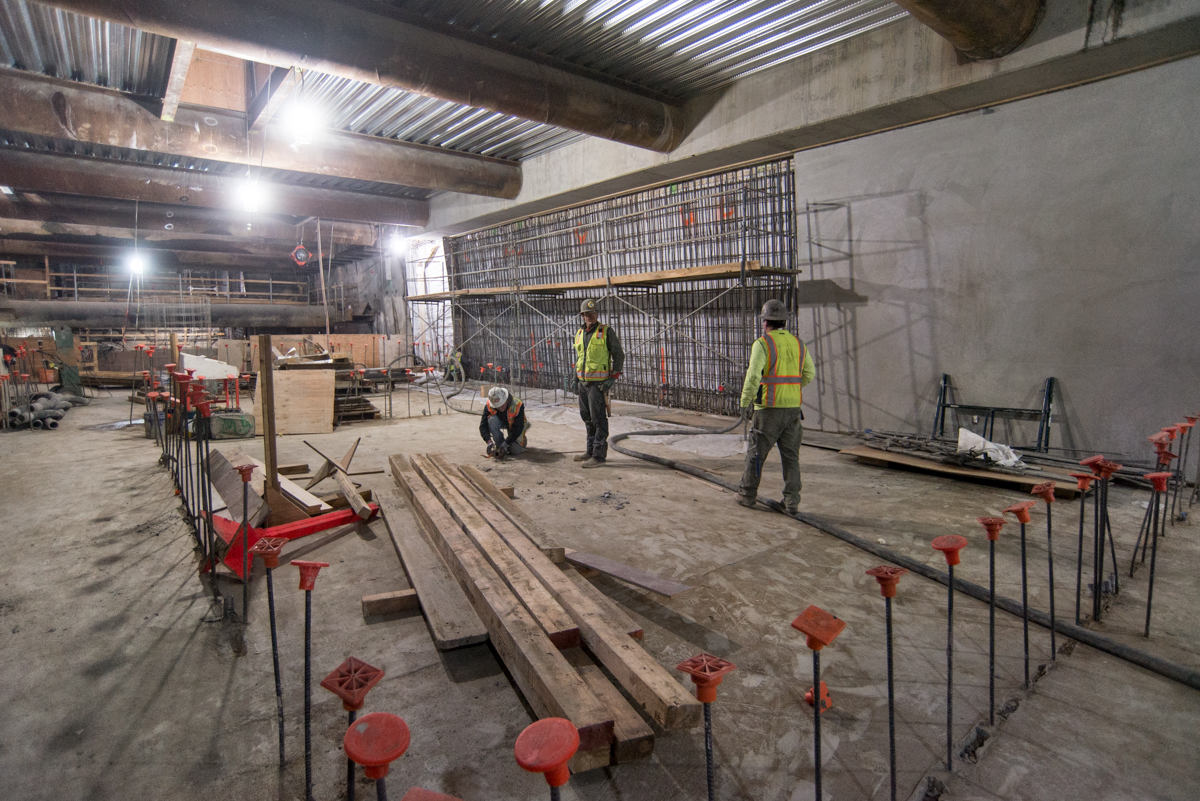 Capped rebar marks the outline of a future interior wall on the mezzanine level of the station box under Stockton Street. Overview 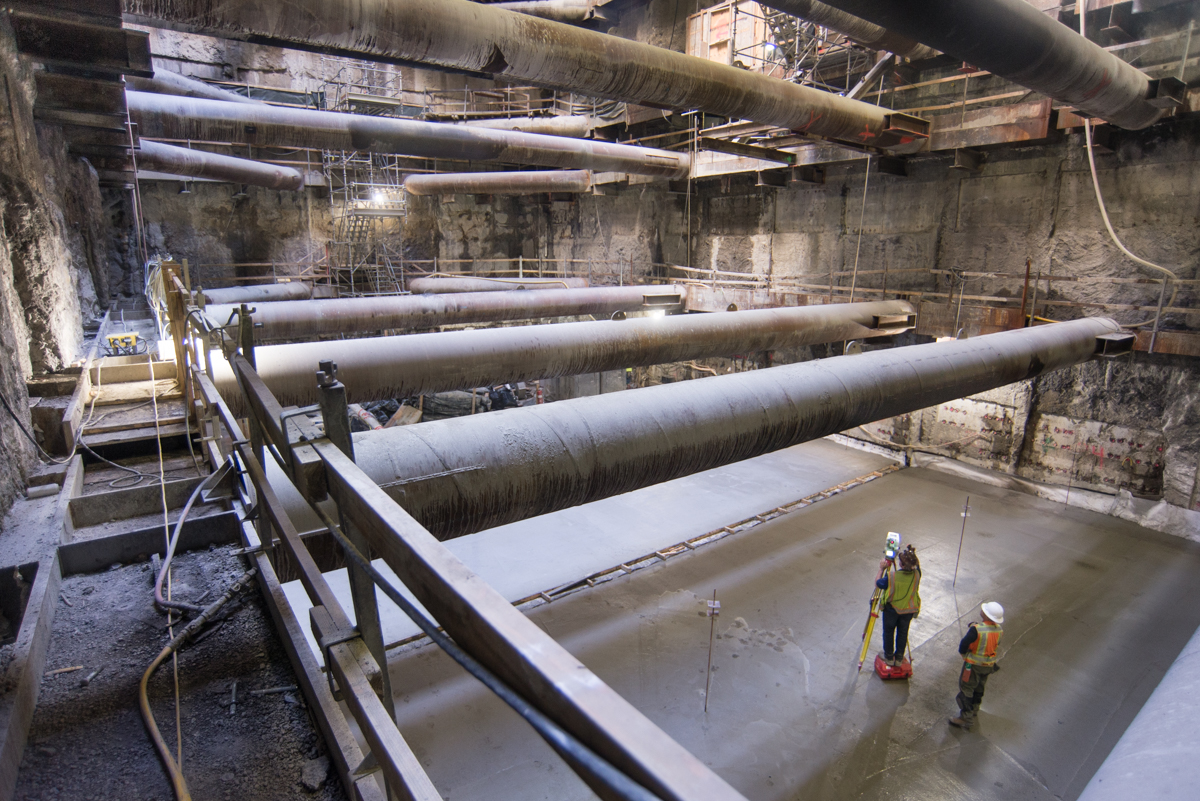 Surveyors check readings following an initial concrete pour at the bottom of the Chinatown Station headhouse. Chinatown Station The construction of Chinatown Station uses the sequential excavation method (SEM) along Washington Street and Stockton Street. The SEM provides a high degree of flexibility during construction and makes it possible to control virtually all kinds of ground conditions, thereby greatly reducing the risks of construction. This method of tunnel construction is used worldwide for small to large openings in a variety of ground types ranging from rock to soil.

Current activities include construction of the north and south platform caverns, as well as the invert slab of the station headhouse.  A pedestrian walkway is open on the north side of Washington connecting Trenton and Stockton. 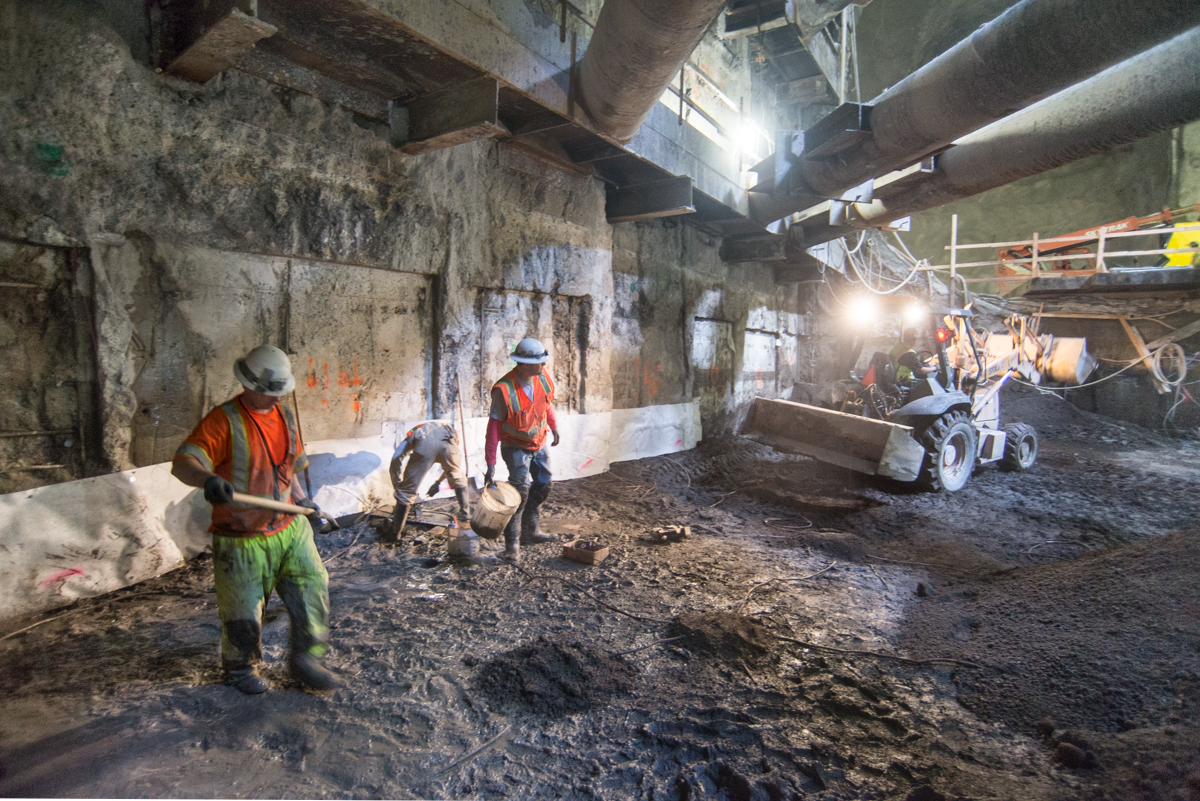 Gravel is spread across an area at the north end of the station headhouse as part of grading and grounding wire installation work. 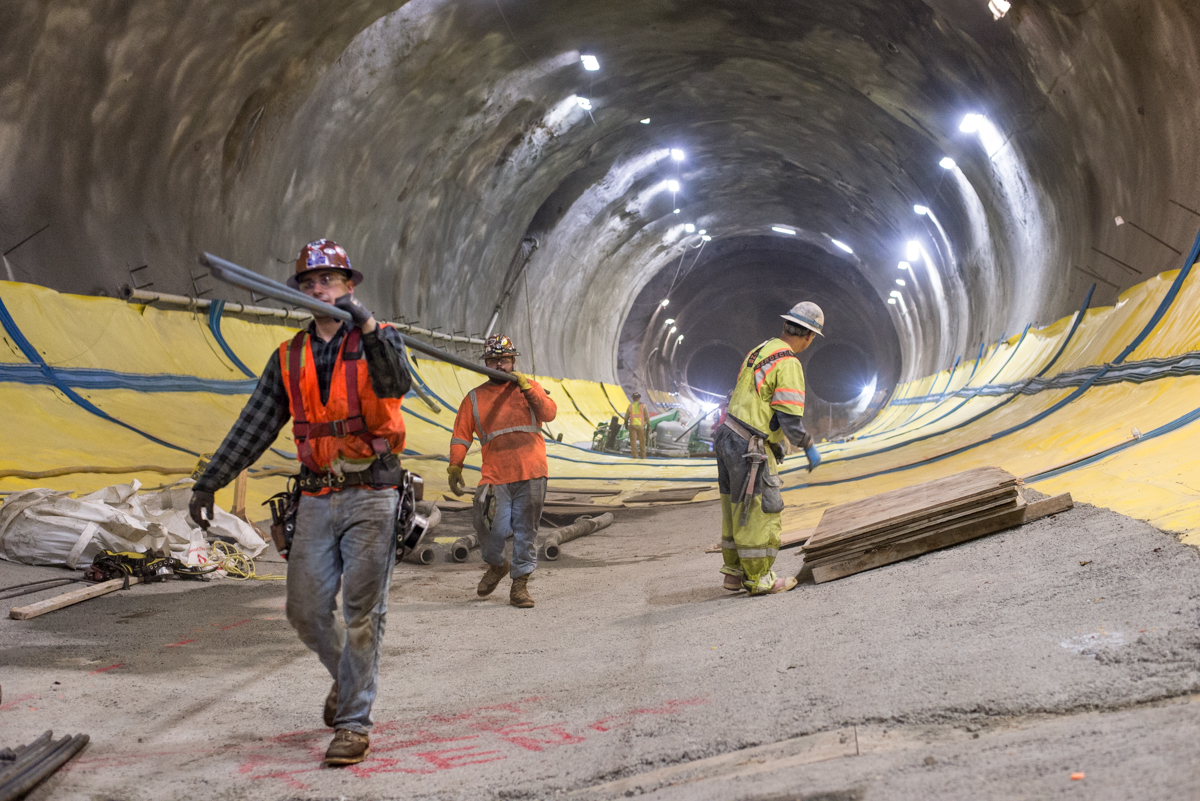 Workers pass back and forth up and down the station cavern, carrying strands of rebar from their delivery area a hundred yards to the north. Overview