Skip to main content
ATTN: IB #FMarket delayed at Market and Van Ness due to a shoe hanging on the overhead wire. Will update. (More: 28 in last 48 hours)
Subscribe 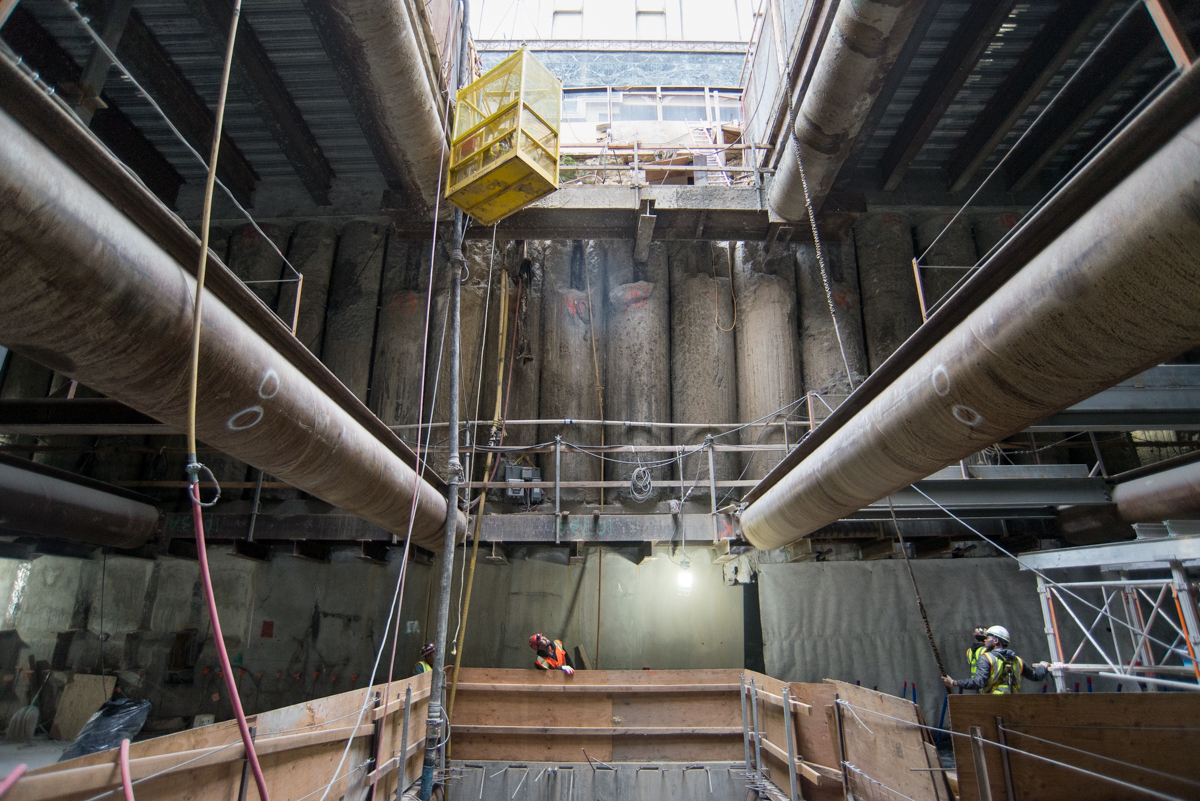 A man in a safety cage works on steel reinforcing inside the opening for an access shaft just north of O'Farrell, as associates observe from below, inside the UMS station box. Central Subway | Project Advancement 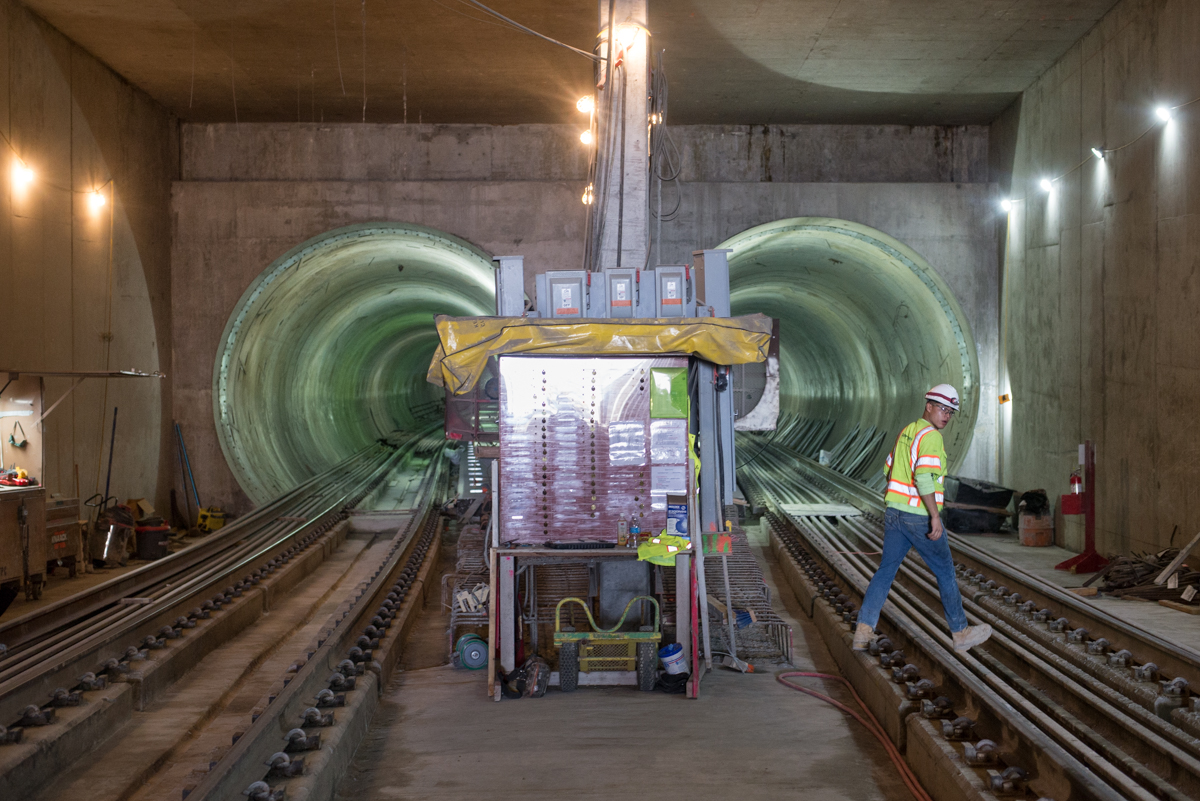 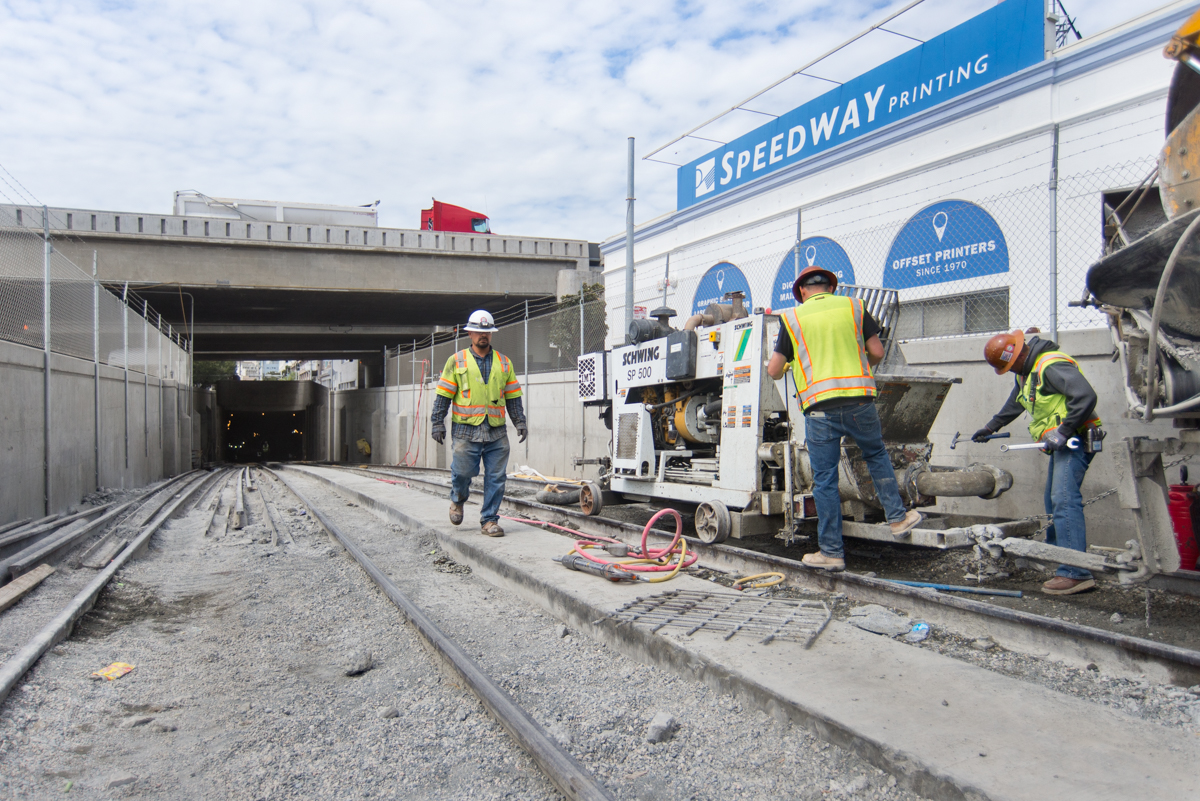 Workers at the top of the tunnel portal ramp prepare a concrete pump for a pour later in the afternoon. 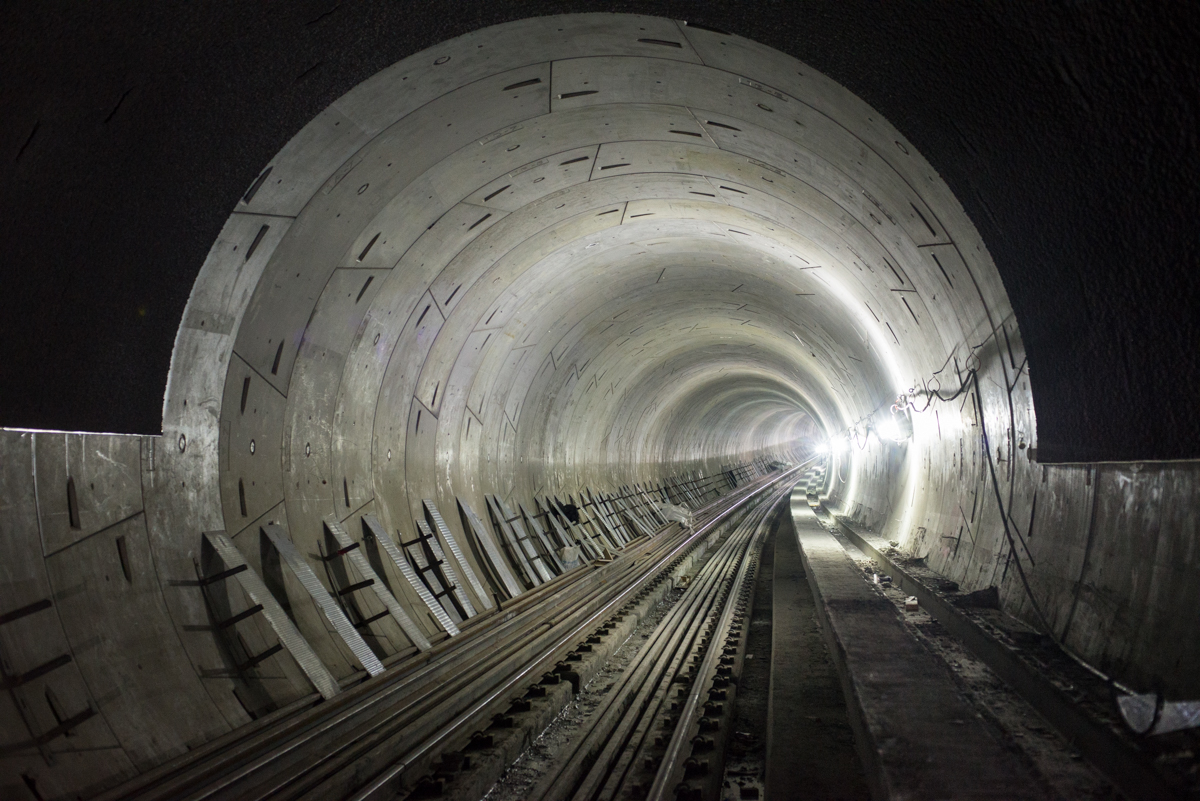 Steel walkway cover panels line the east side of the northbound tunnel as it approaches the Yerba Buena/Moscone Station. Overview 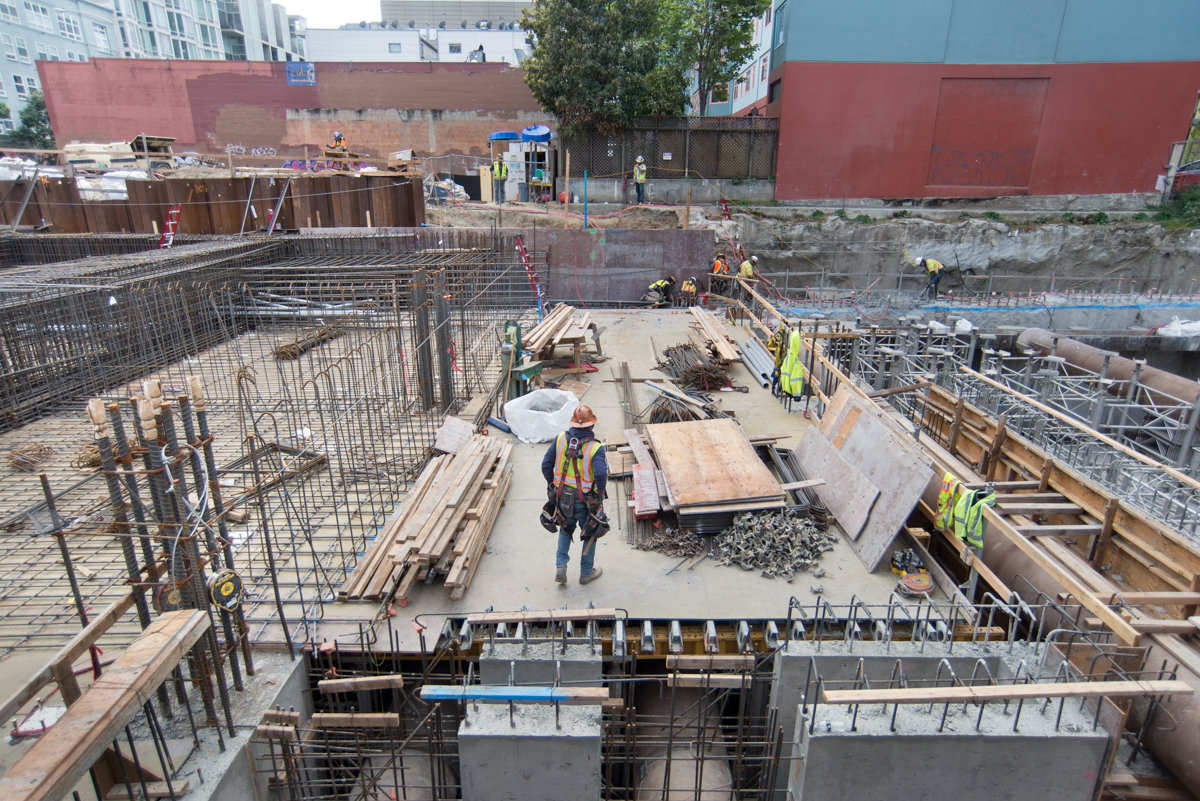 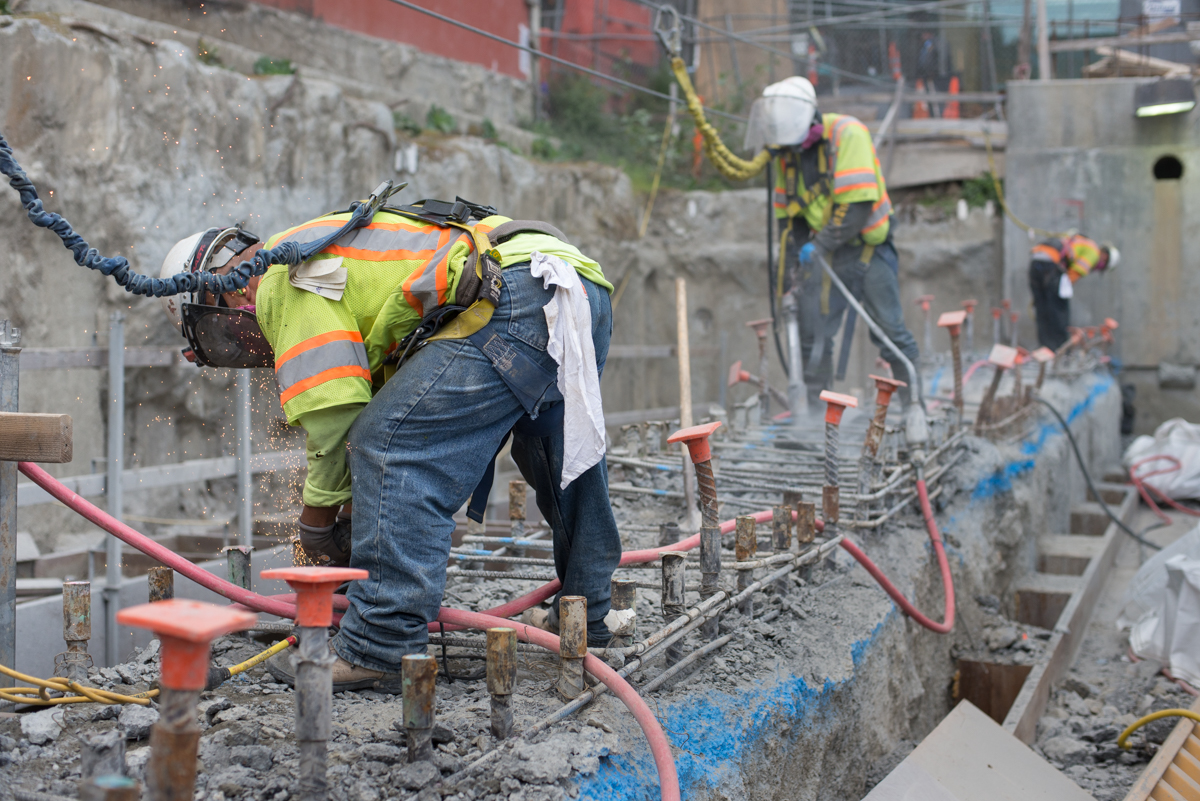 Concrete is chipped away at the top of one of headhouse slurry walls to uncover rebar, which will be tied into the future roof slab. 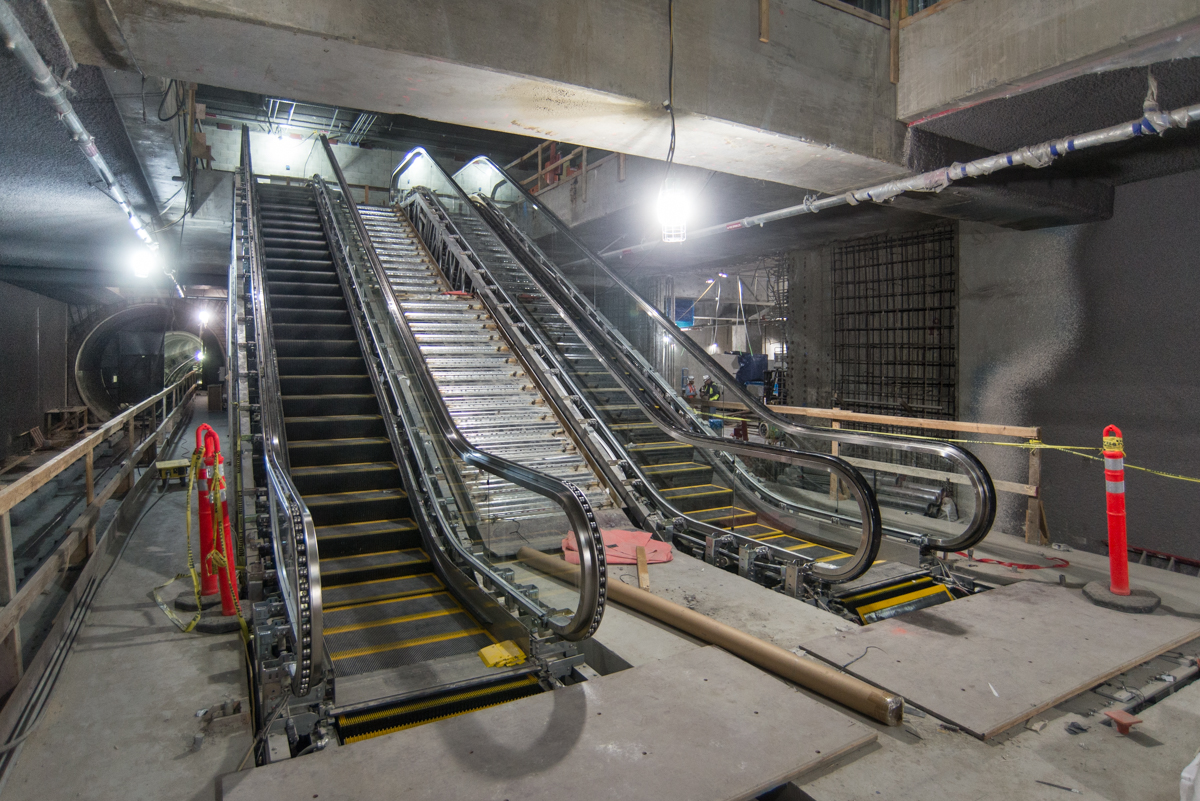 Handrails are being installed for the escalators at the south end of the Yerba Buena/Moscone Station platform. Overview 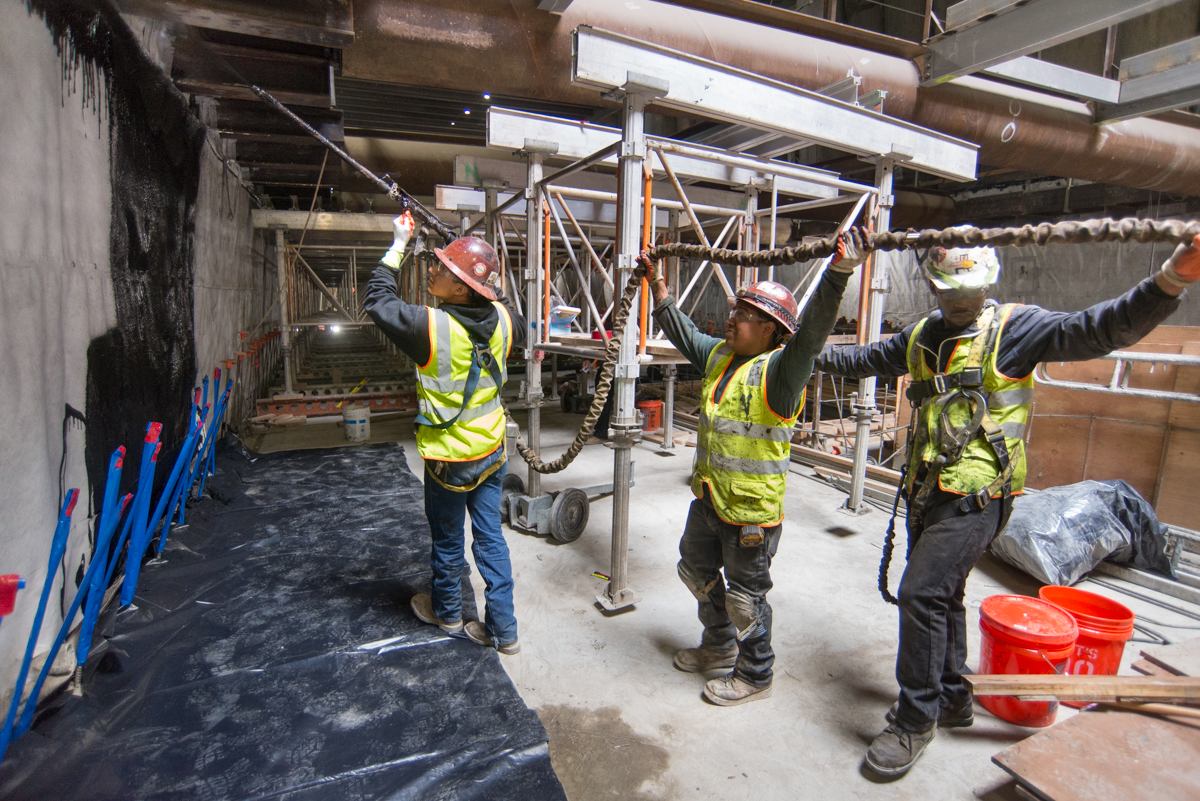 Three men work to control the spray of tar on sheets of vinyl as part of waterproofing work along the west wall of the Union Square/Market Street station box. Union Square | Market Street Station 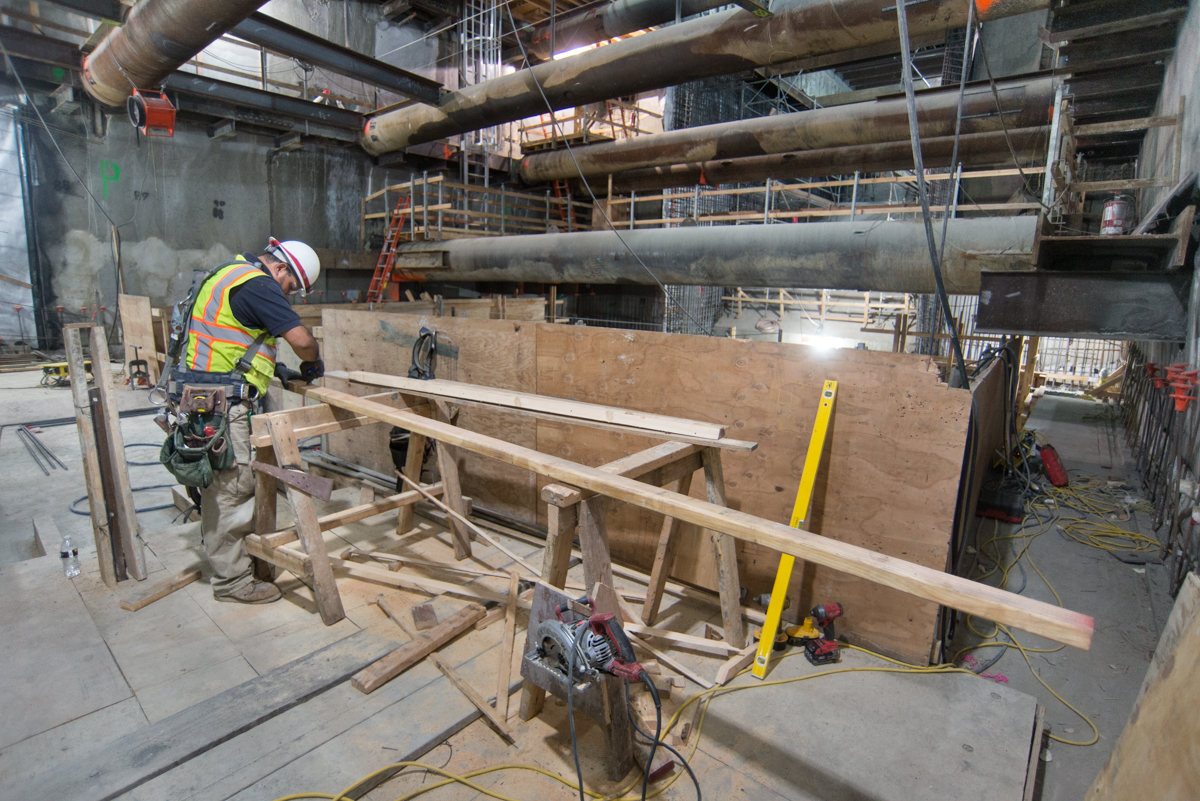 A carpenter works a long 2x4 as part of concrete form construction at the south headwall of the Union Square/Market Street Station. 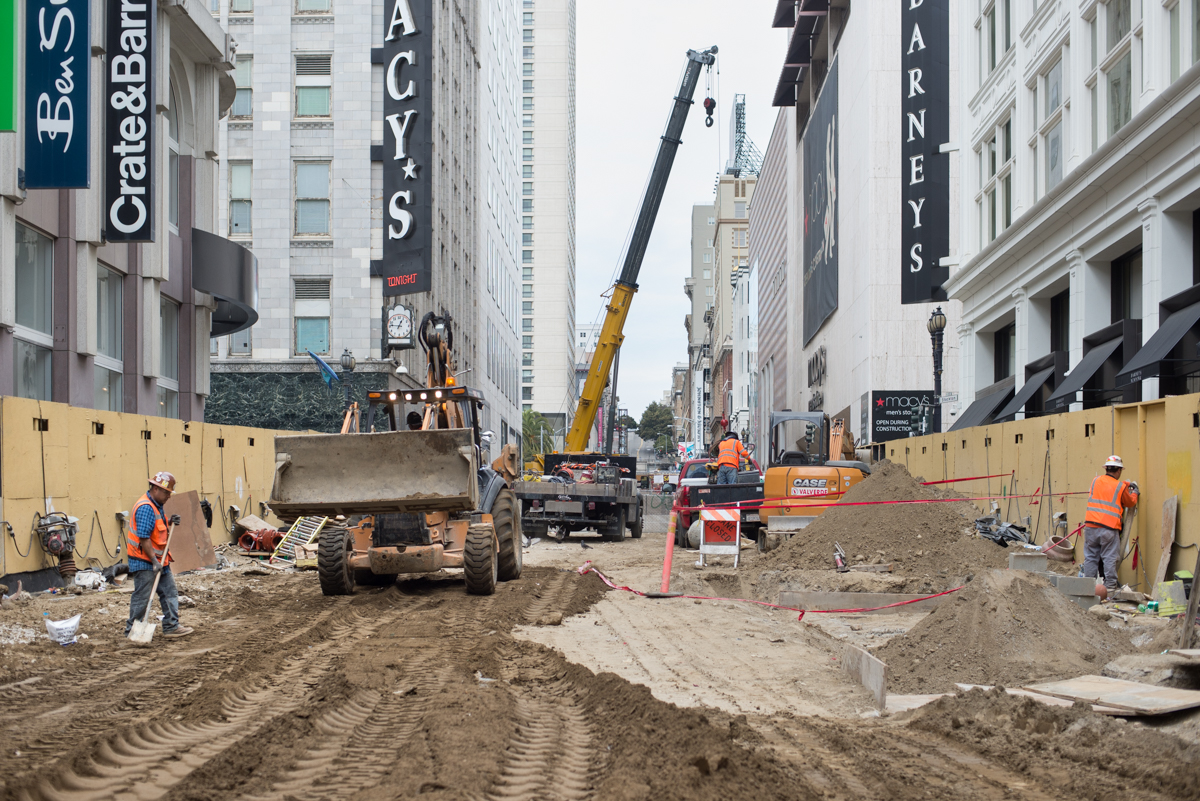 The surface of the worksite is being regraded following the installation of new sewer lines along Stockton between O'Farrell and Ellis. Overview 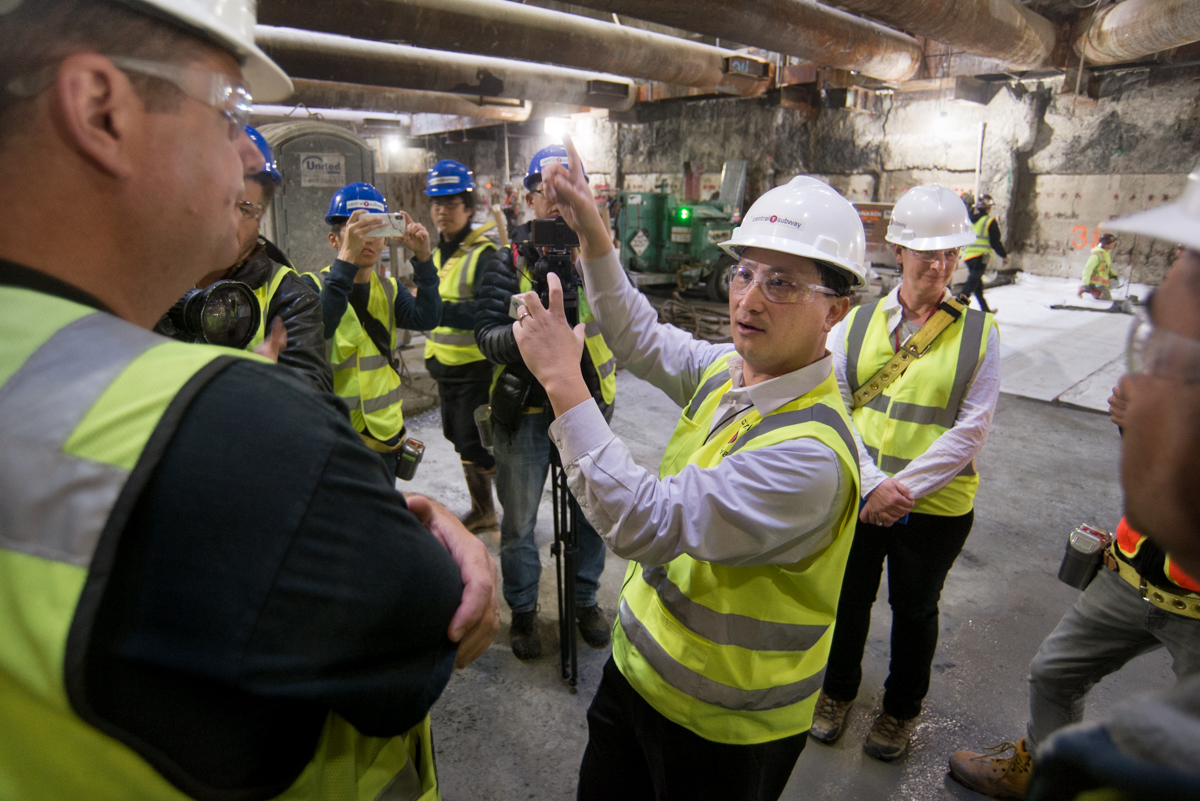 Mayor Mark Farrell, SFMTA Board Chairman Cheryl Brinkman, and SFMTA Director Ed Reiskin toured Chinatown Station along with Central Subway Program Director Albert Hoe on April 3rd. Chinatown Station The construction of Chinatown Station used the sequential excavation method (SEM), providing a high degree of flexibility and control over ground conditions, thereby greatly reducing the risks of construction. This method of tunnel construction is used worldwide for small to large openings in a variety of ground types ranging from rock to soil.  Excavation of the Chinatown Station site was completed in February 2018. 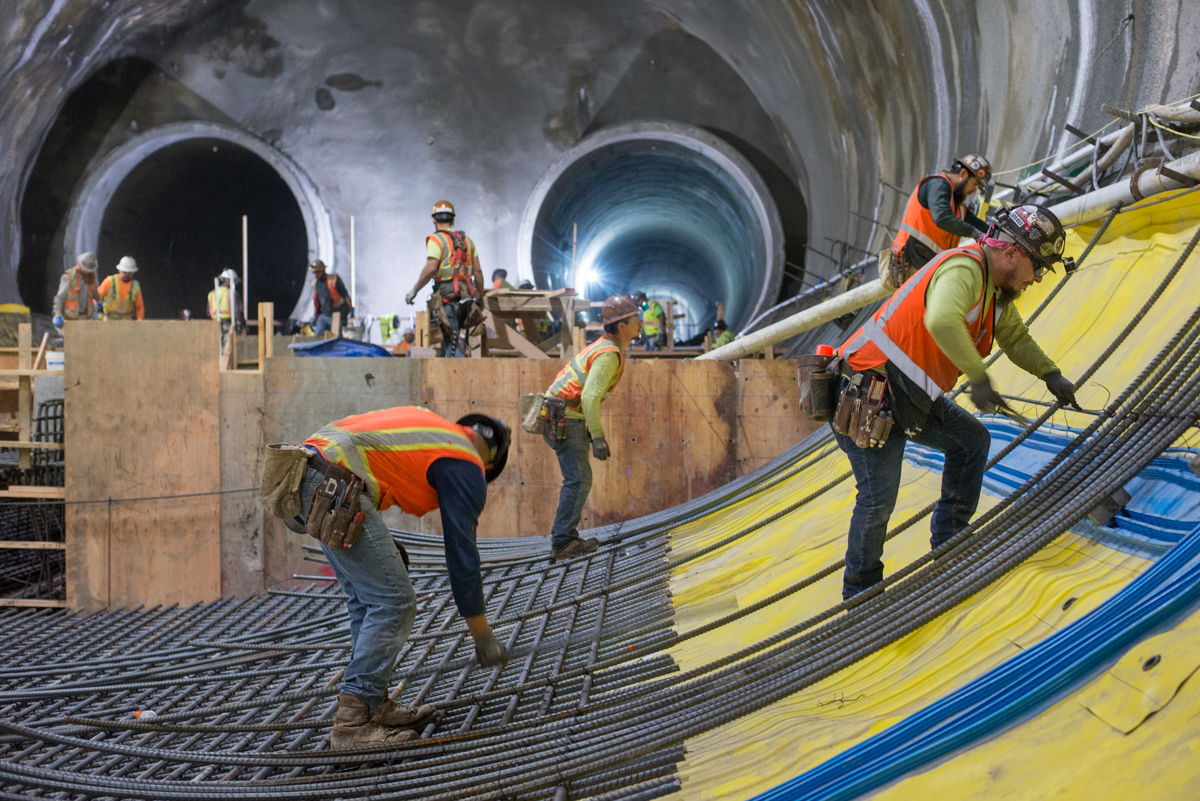 Workers place curved rebar one piece at a time to construct the outer shell of the Chinatown Station track crossover cavern. 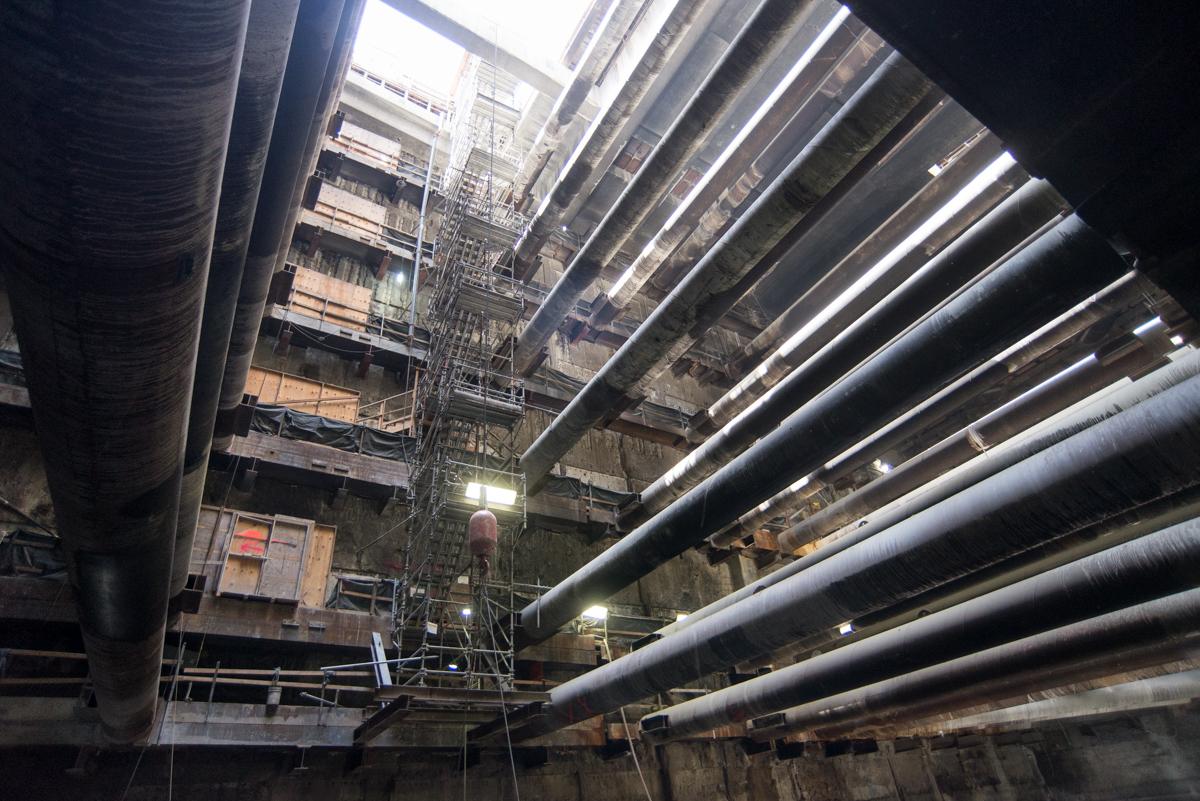 Rows and columns of struts span across the station headhouse, looking up toward the main access shaft from the east side. Overview