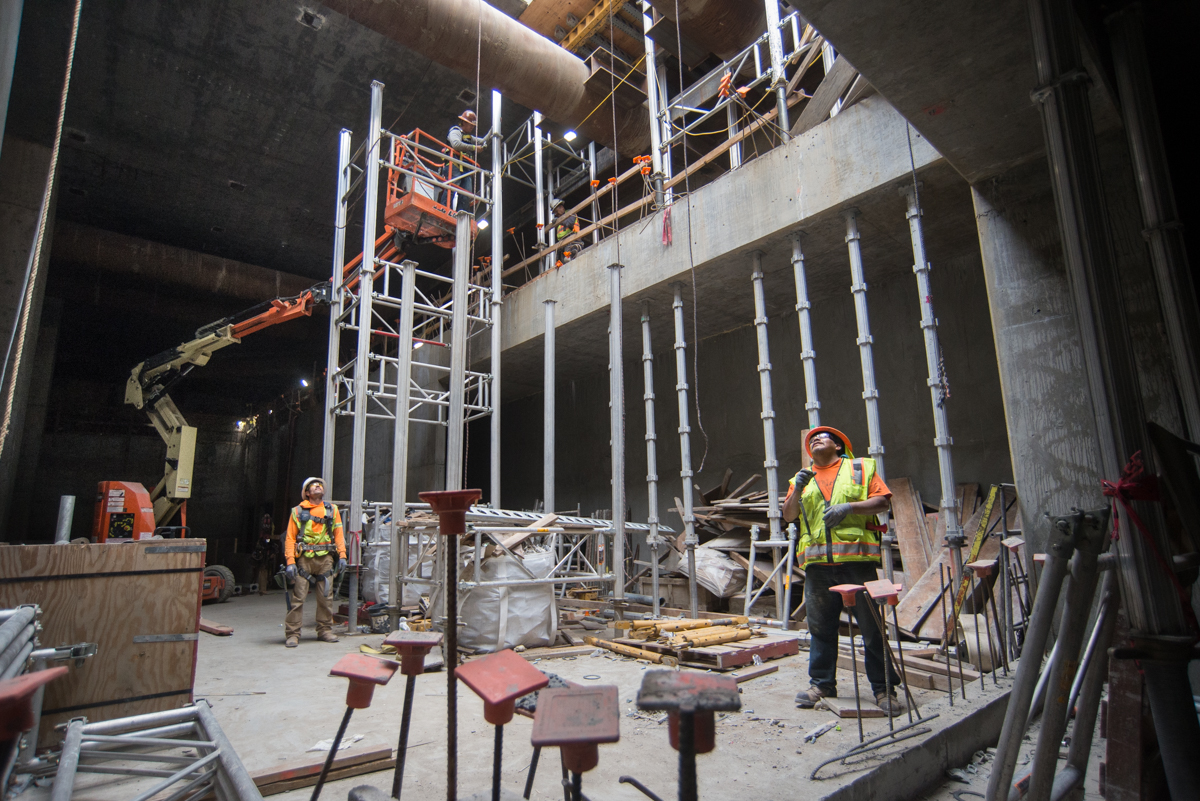 A crew inside the concourse level of the Yerba Buena/Moscone Station headhouse coordinates by radio with a crane operator at the surface to receive a box of supplies. Central Subway | Project Advancement 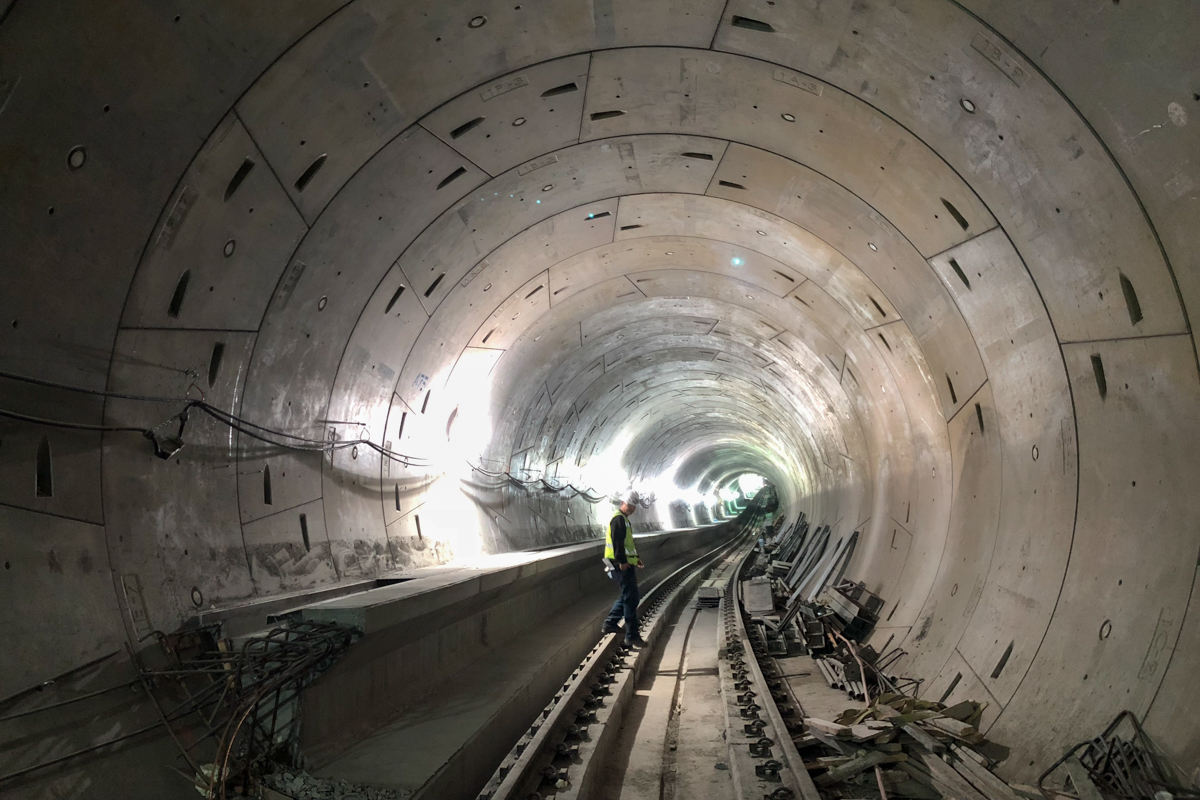 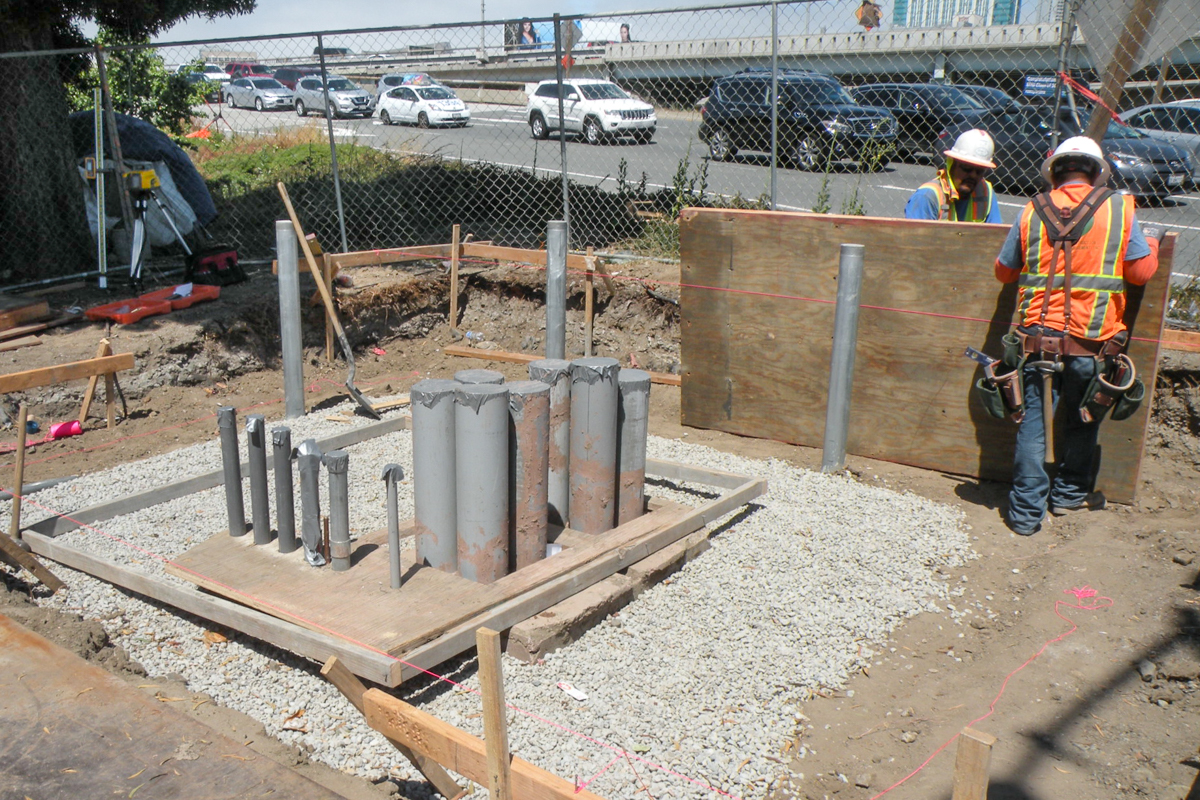 A crew installed concrete forms prior to pouring the slab of a sectionalizing breaker panel near the end of the 4th Street ramp of I-80. 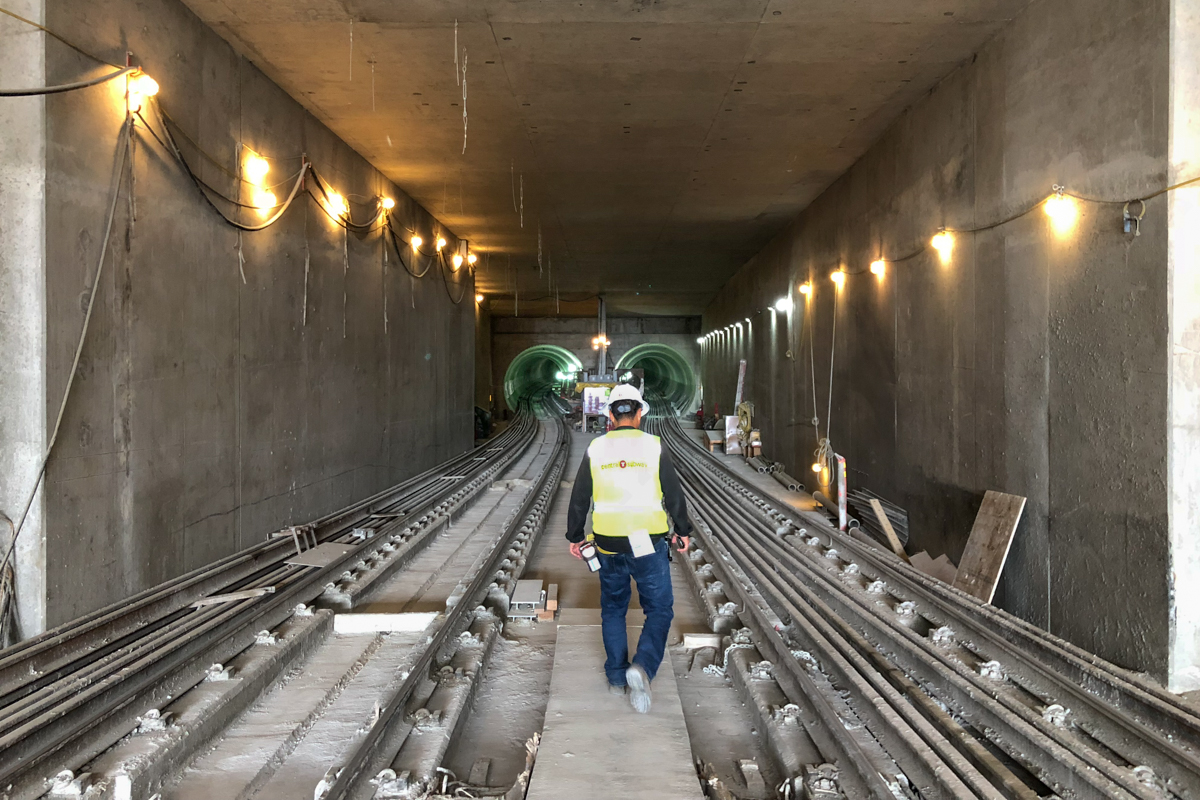 An inspector enters the lower portion of the tunnel portal ramp, under the I-80 freeway overpass on 4th Street. Overview 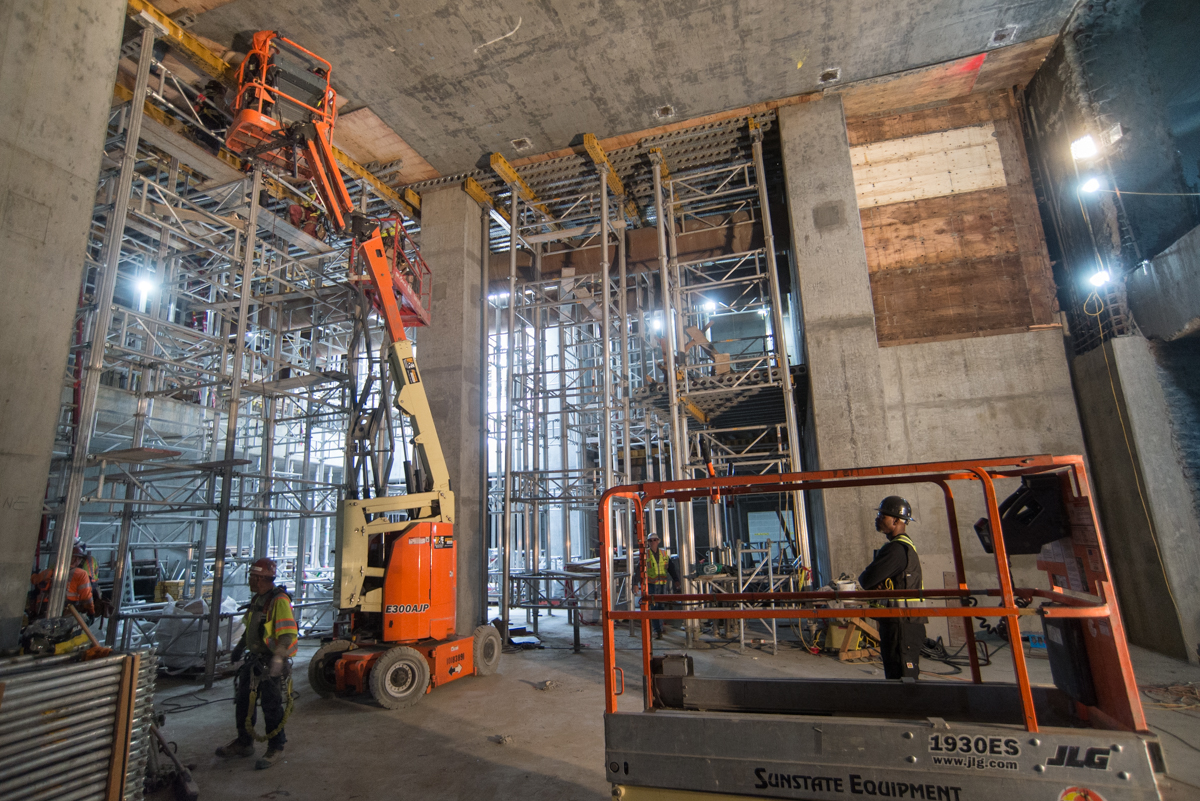 The cavernous space of the future lobby area inside the headhouse begins to open up as workers continue to remove scaffolding and concrete formwork. Yerba Buena | Moscone Station 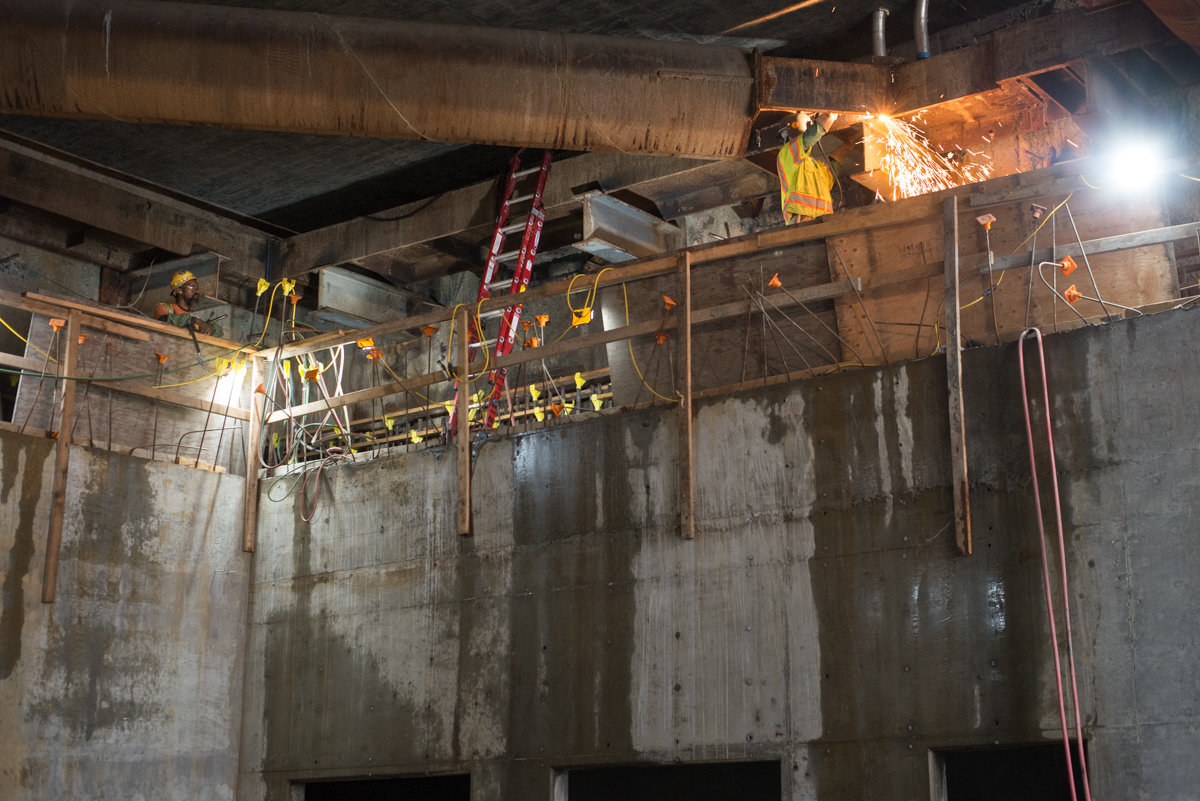 Now that the southern half of the headhouse roof slab has been constructed, temporary steel bracing at the south end can be removed. 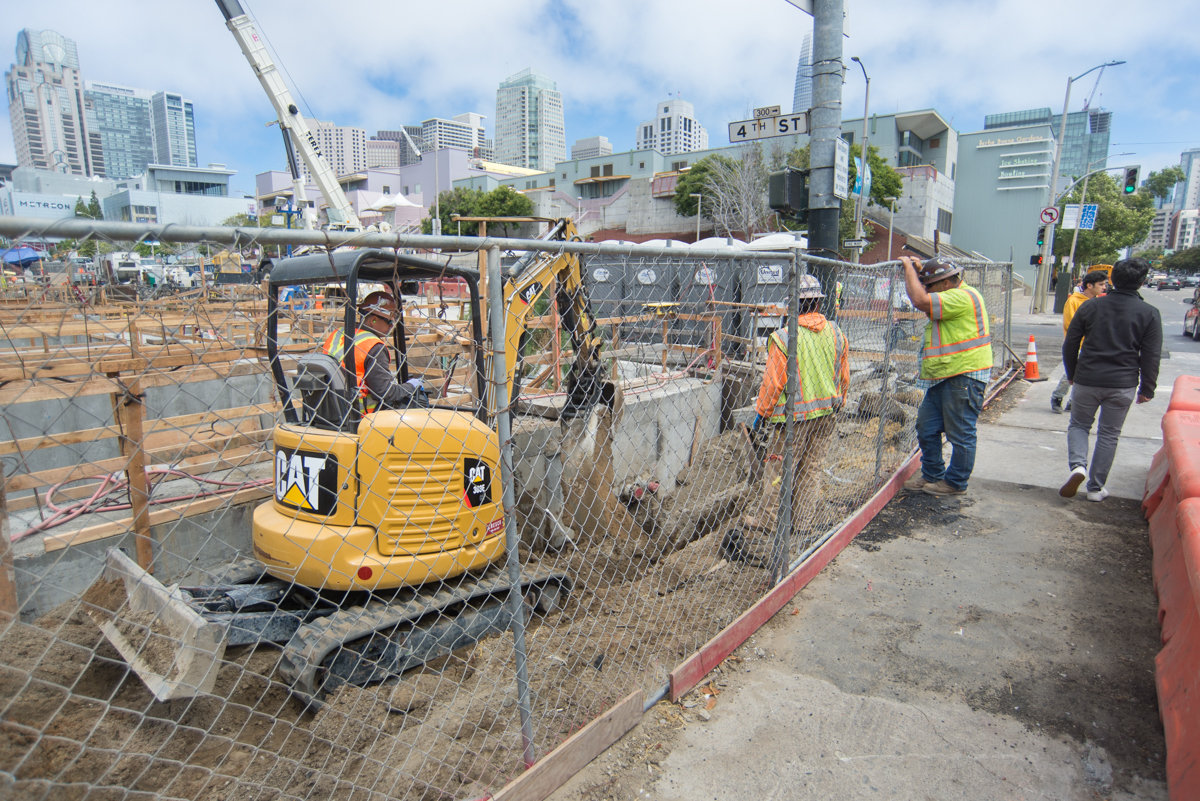 Workers remove unneeded formwork and reinforcing from along the southern edge of the Yerba Buena/Moscone Station headhouse. Overview

What: Sewer replacement work
Time: 8pm - 5am
When: Monday to Friday
Where: 4th and Howard Street intersections. 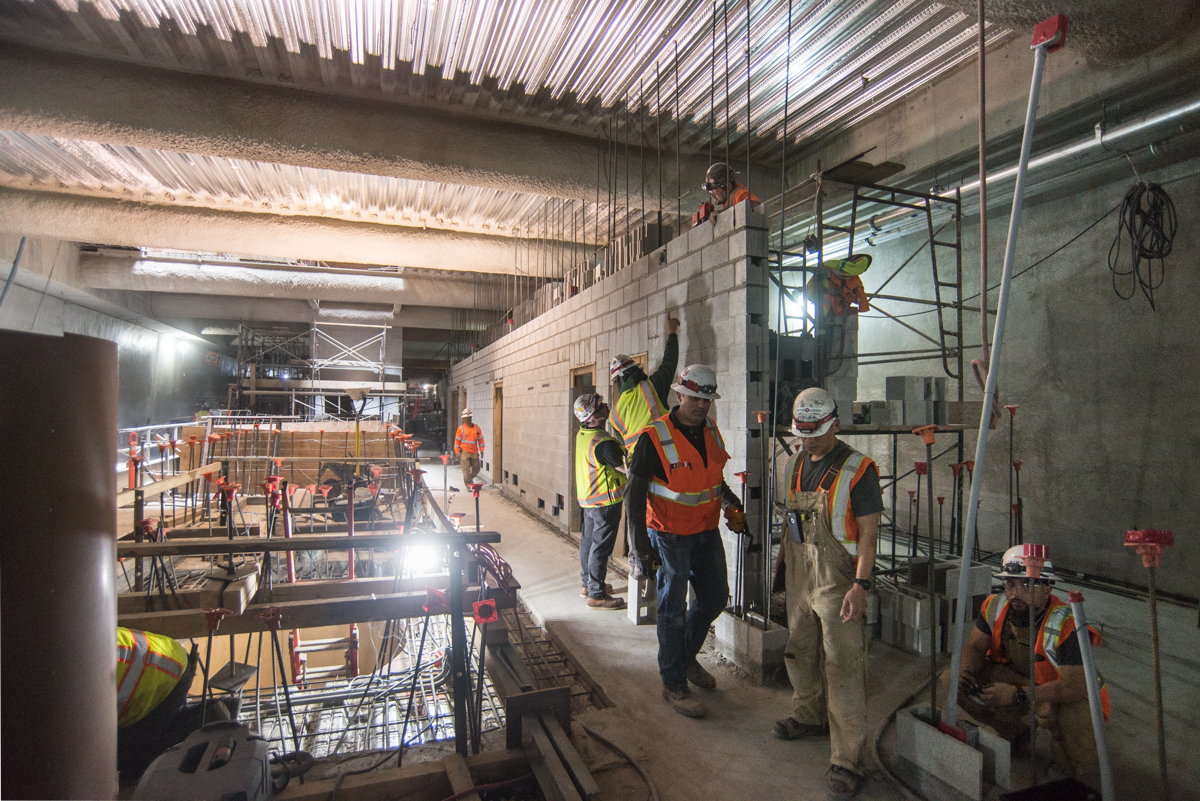 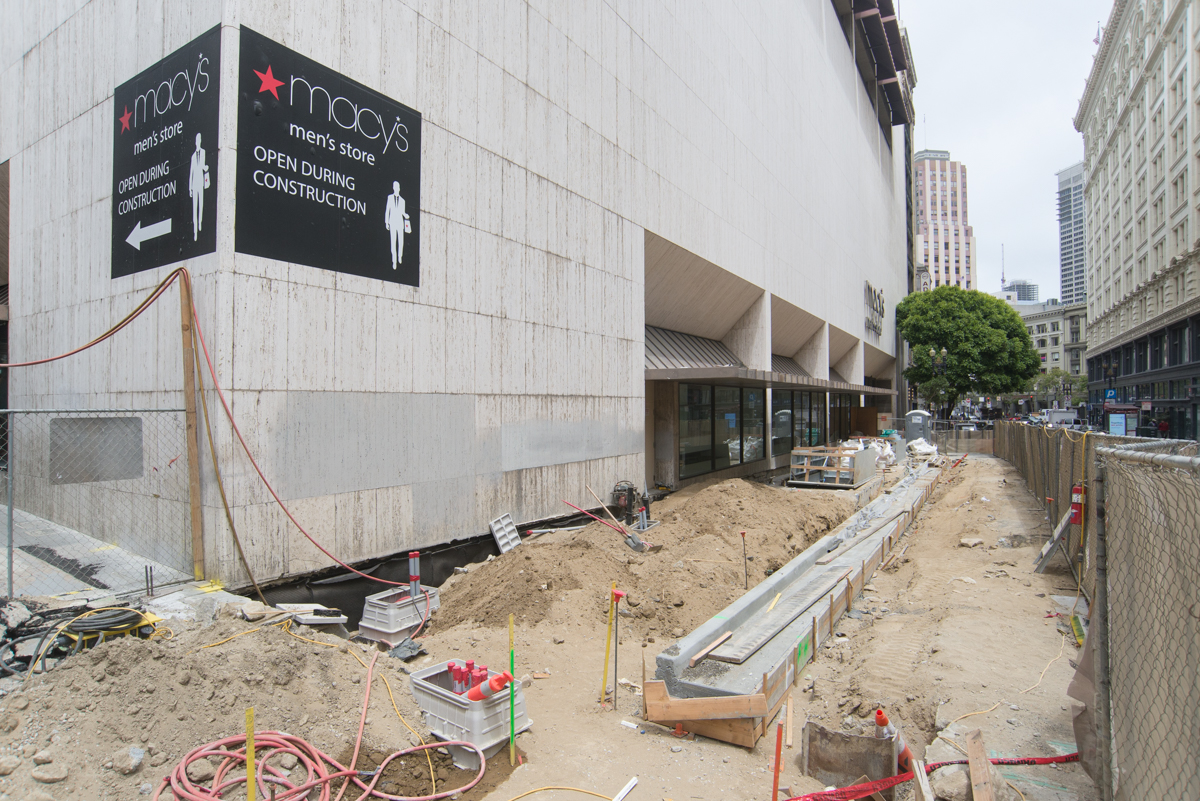 A portion of the curb on the north side of O'Farrell has been constructed as part of roadway and sidewalk restoration work. 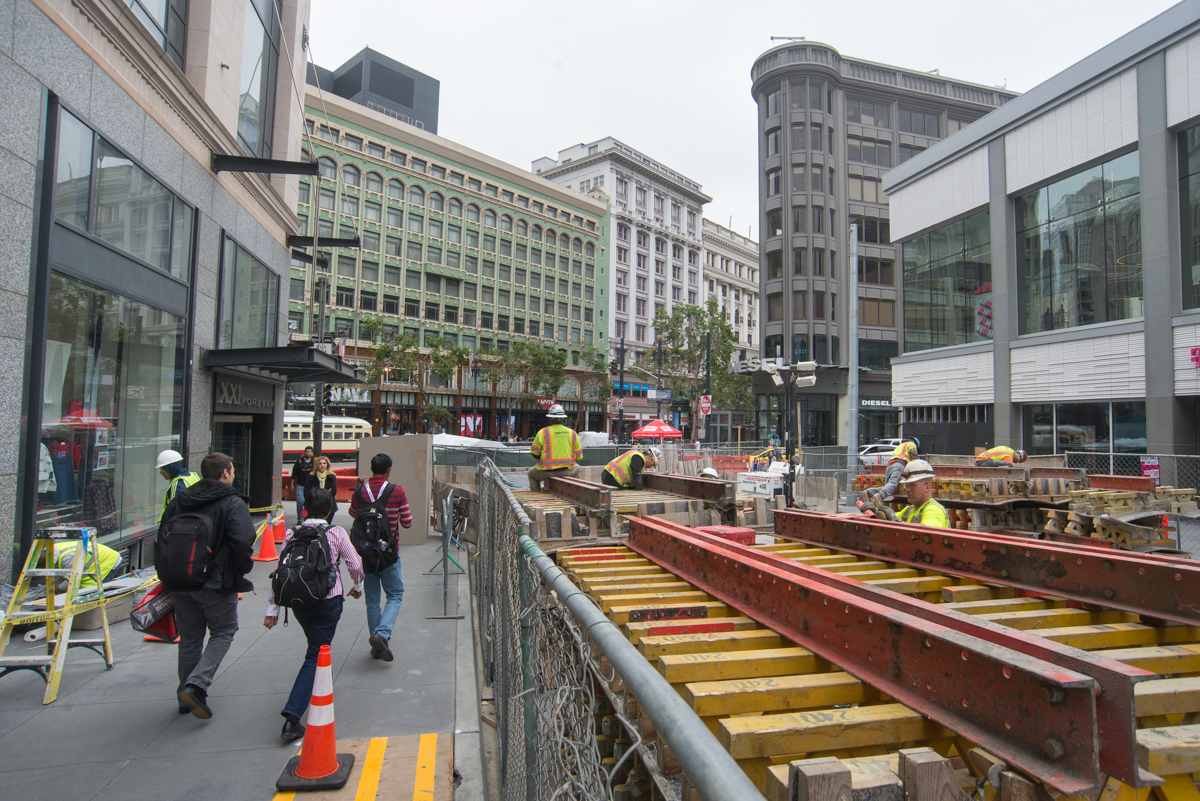 A crew disassembles concrete forms inside the staging area between Ellis and O'Farrell.  These forms were used to build station wall features. Overview 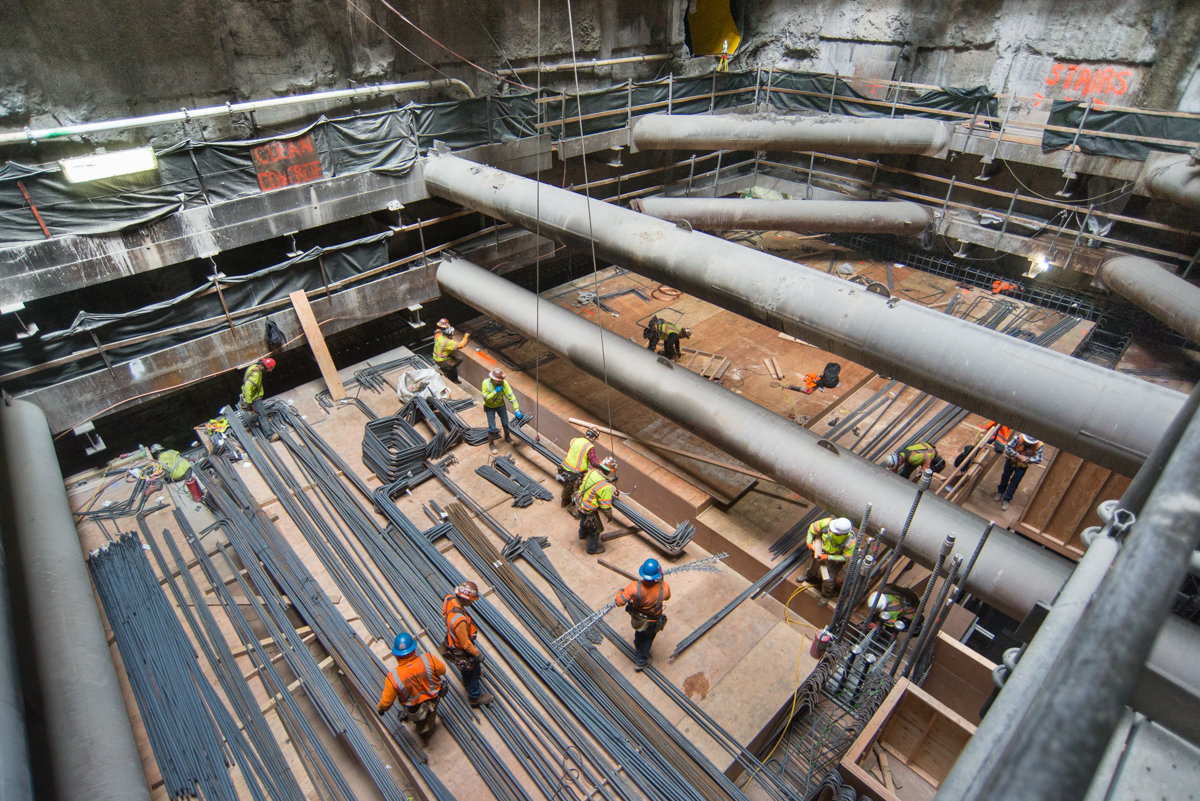 A bundle of rebar is carefully lowered to the bottom of the station headhouse, where workers have begun assembling the rebar cage of the headhouse platform level floor slab. Chinatown Station The construction of Chinatown Station used the sequential excavation method (SEM), providing a high degree of flexibility and control over ground conditions, thereby greatly reducing the risks of construction. This method of tunnel construction is used worldwide for small to large openings in a variety of ground types ranging from rock to soil.  Excavation of the Chinatown Station site was completed in February 2018. 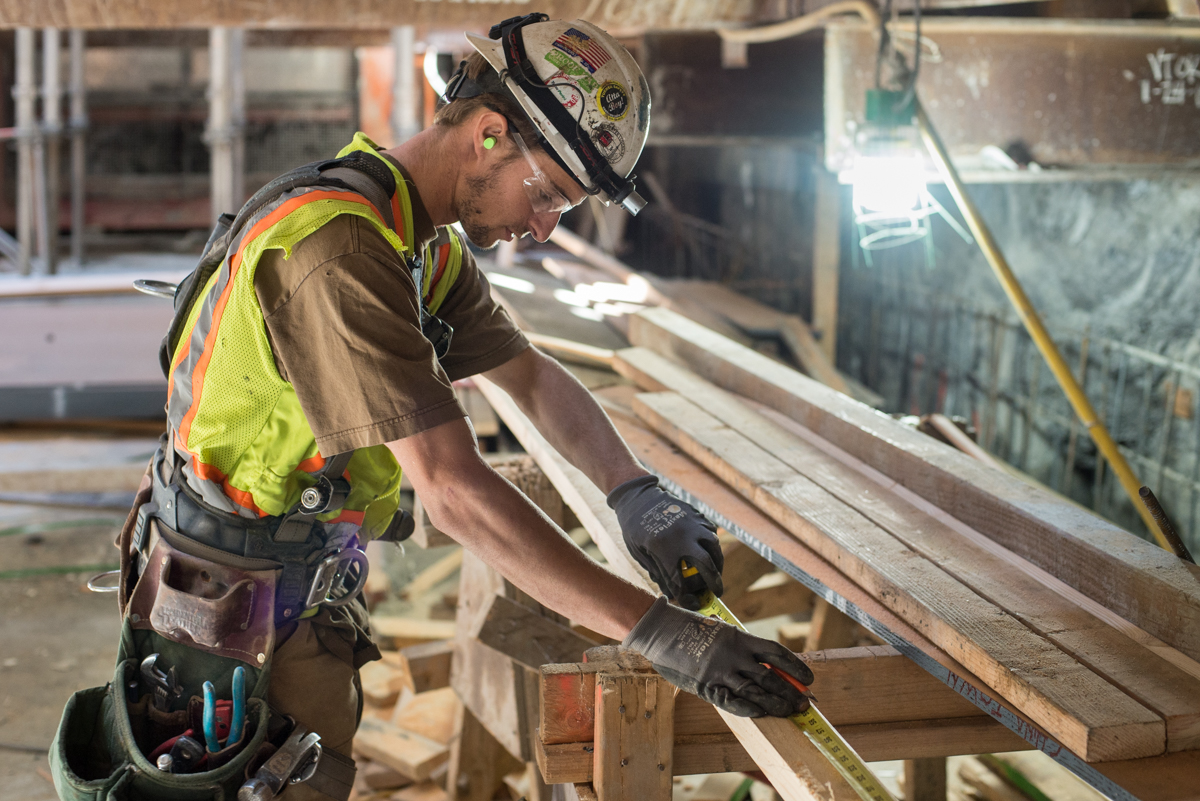 A carpenter helps to construct the next wave of concrete forms, following the completion of two thirds of the invert slab. 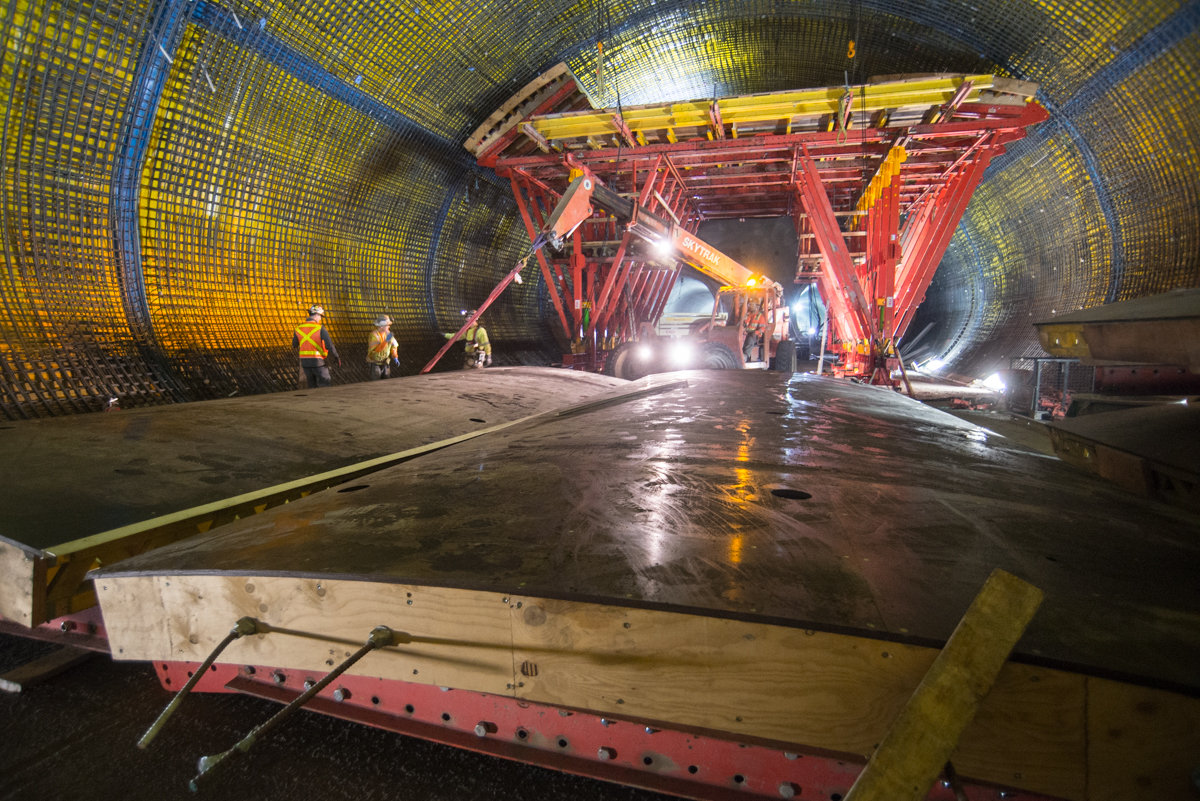 Curved concrete forms are being prepared for installation to build the reinforced concrete inner structural shell of the track crossover cavern. Overview