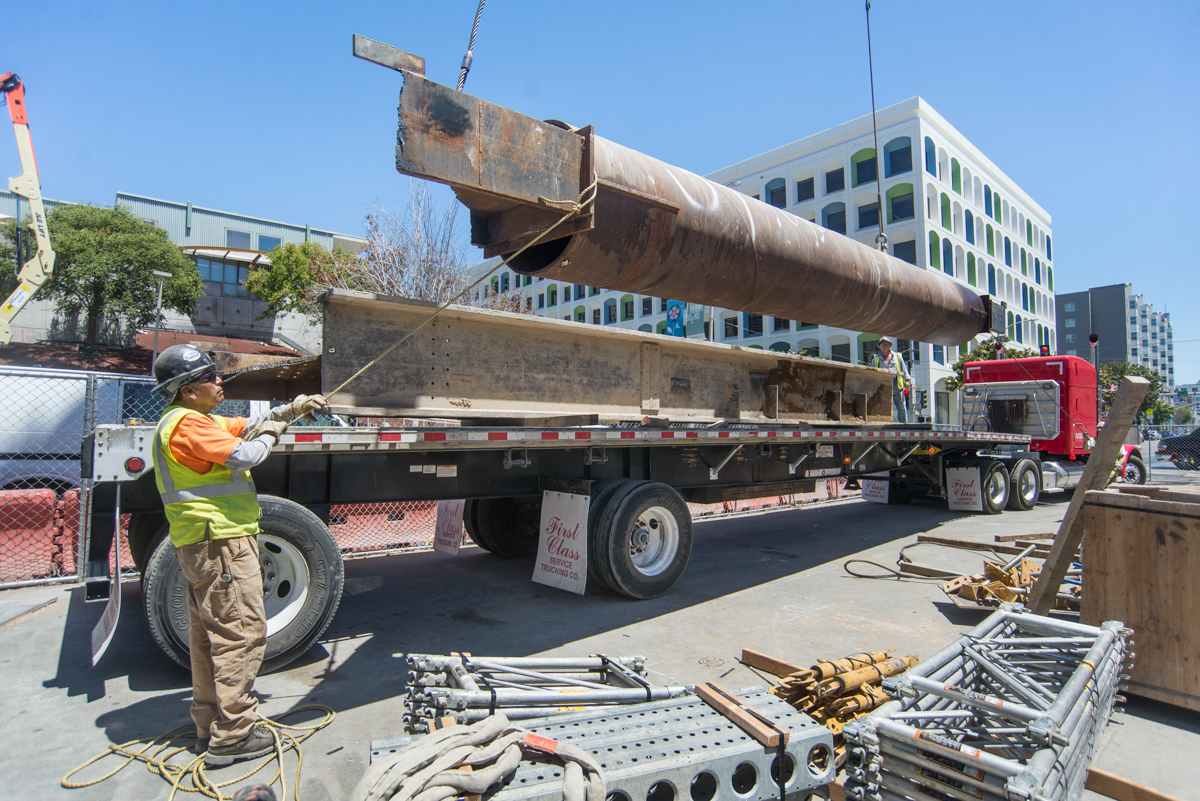 At the surface staging area for the Yerba Buena/Moscone Station site, a strut used in temporary bracing is carefully lowered into place atop a flatbed truck for removal offside. Central Subway | Project Advancement 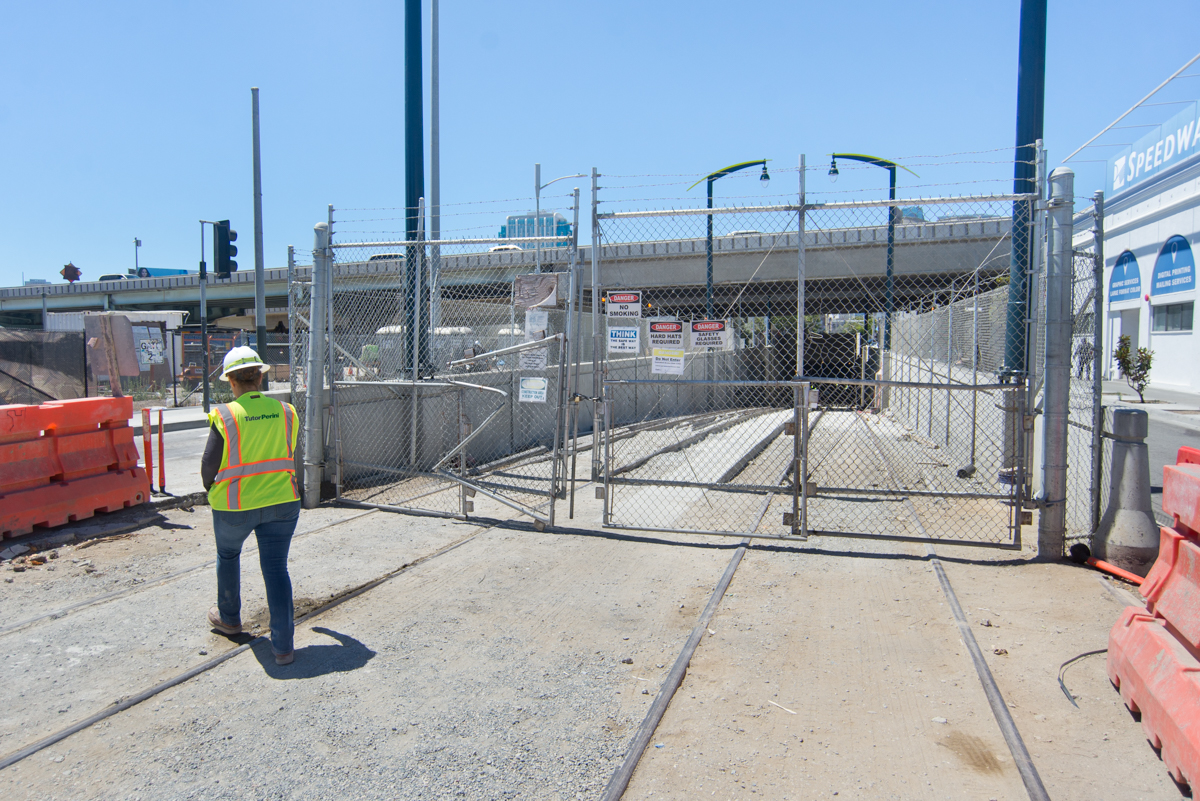 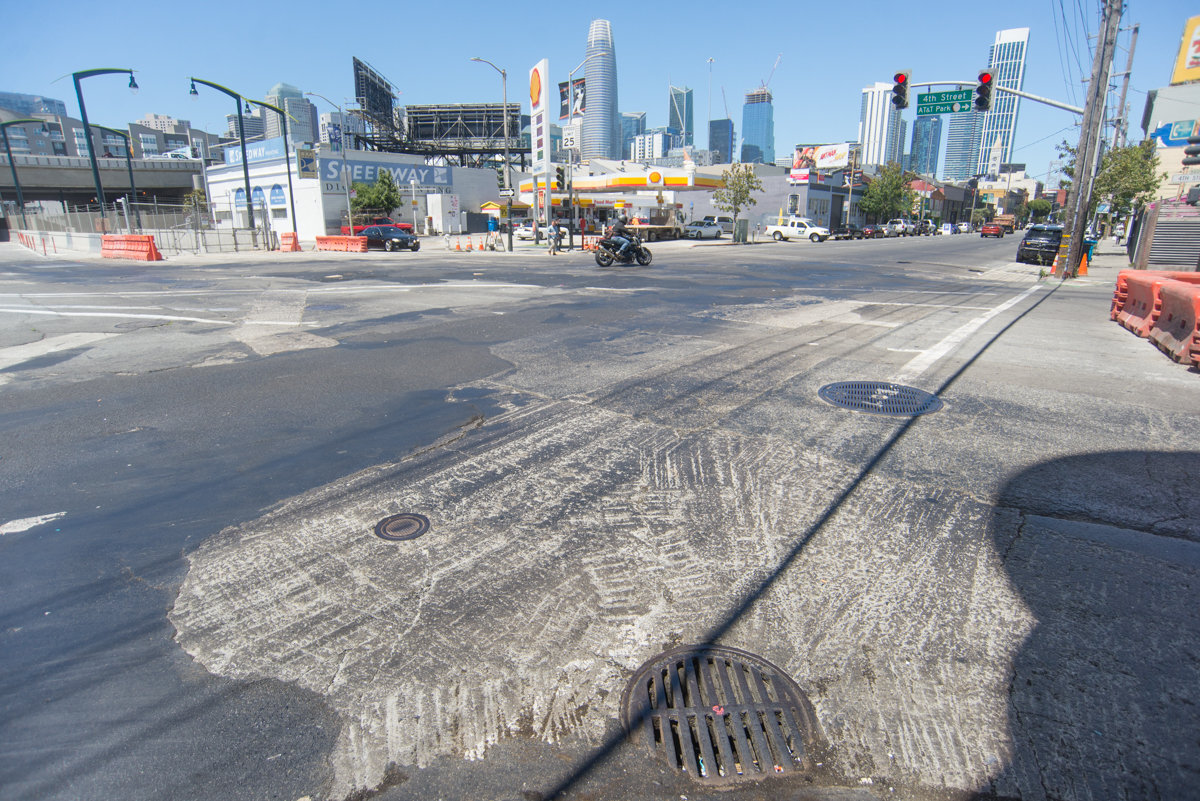 4th and Bryant, one of many intersections along 4th Street where roadway restoration is slated to commence in the coming months. 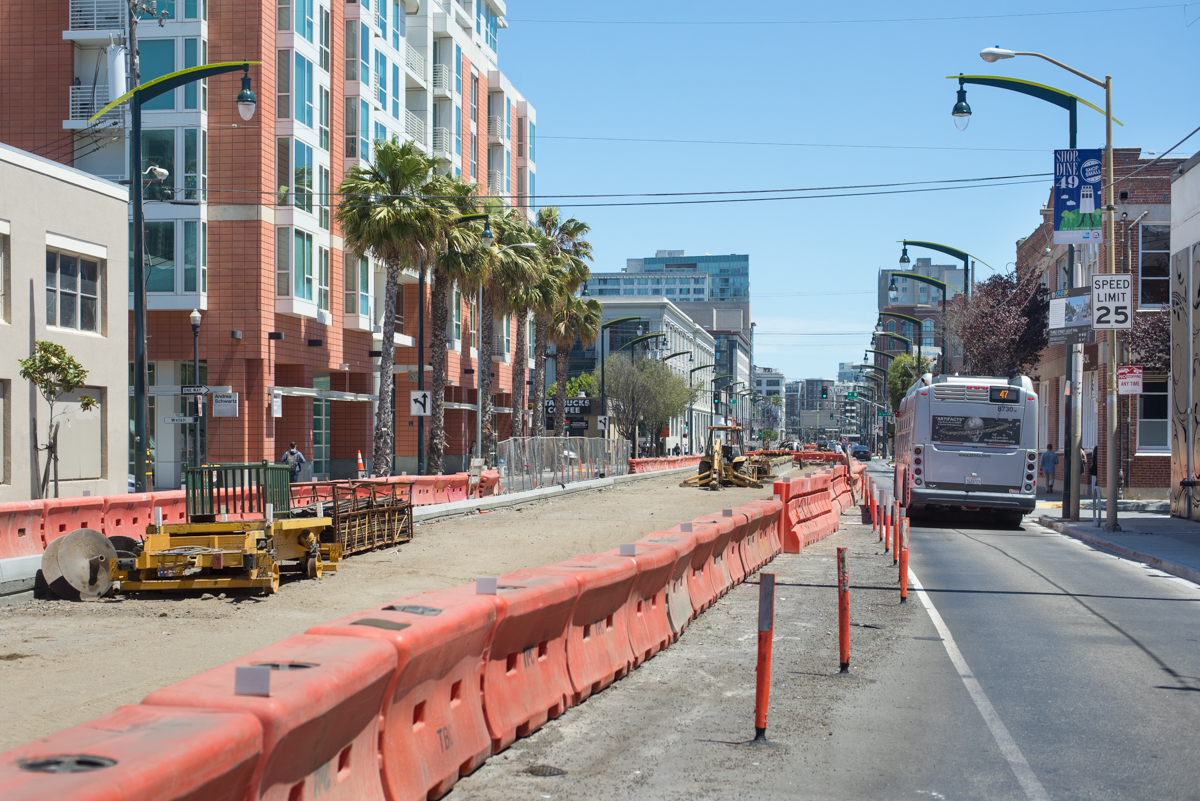 New streetlights which will double as OCS poles now adorn the length of 4th between King and the tunnel portal north of Bryant. Overview 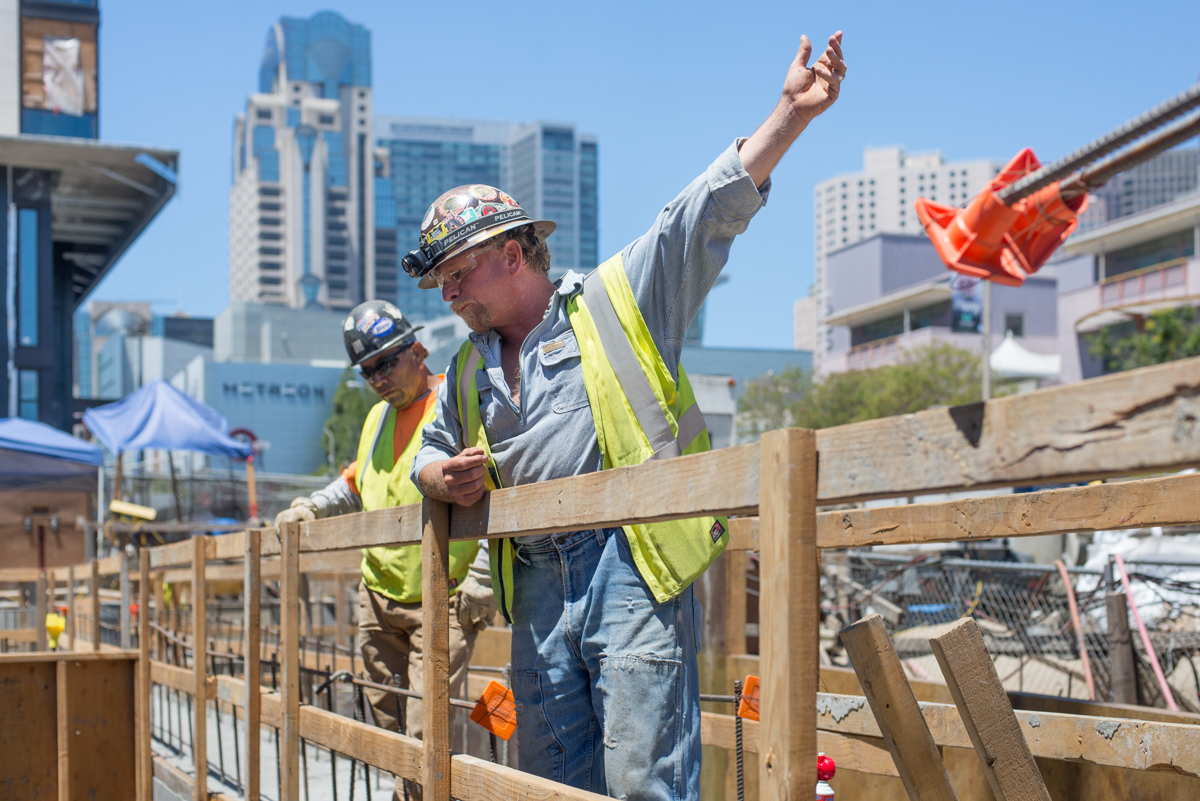 A supervisor uses hand signals to communicate with a crane operator behind him during removal of large steel elements used in temporary bracing inside the headhouse. Yerba Buena | Moscone Station 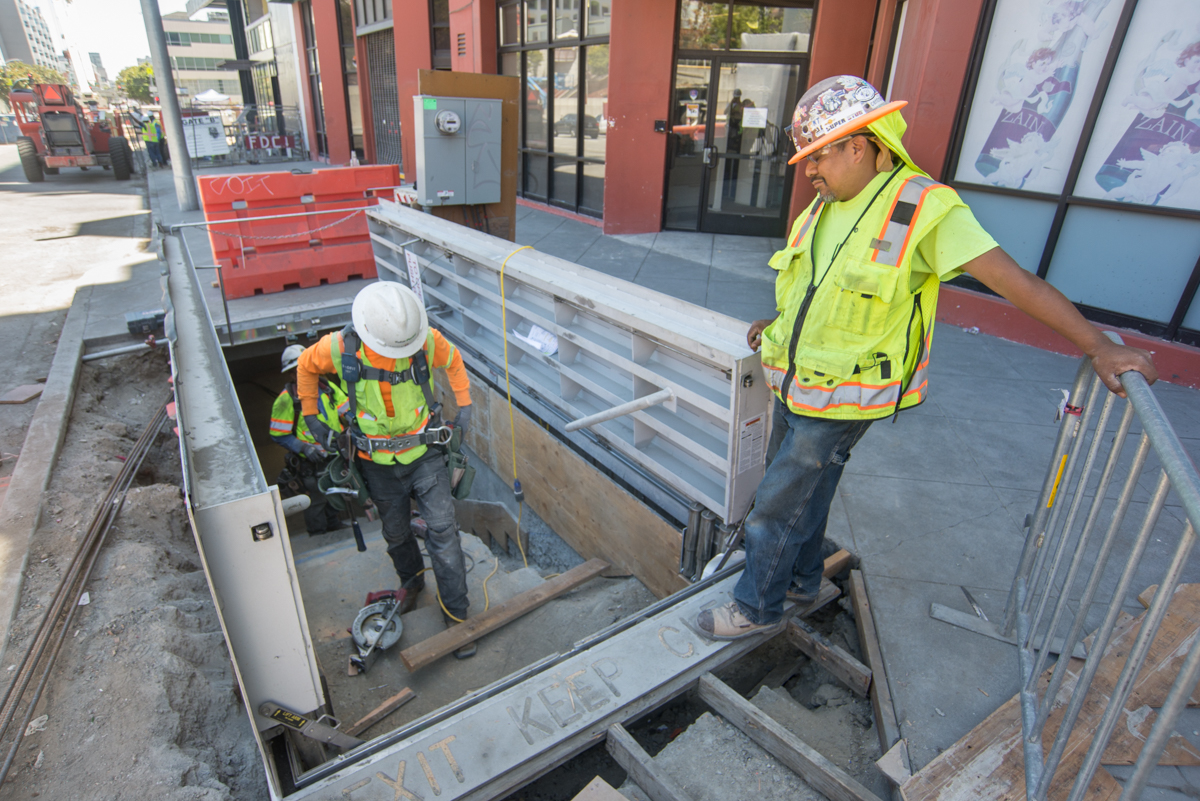 Carpenters build concrete forms to construct final structural elements inside an emergency egress staircase on the west side of 4th Street. 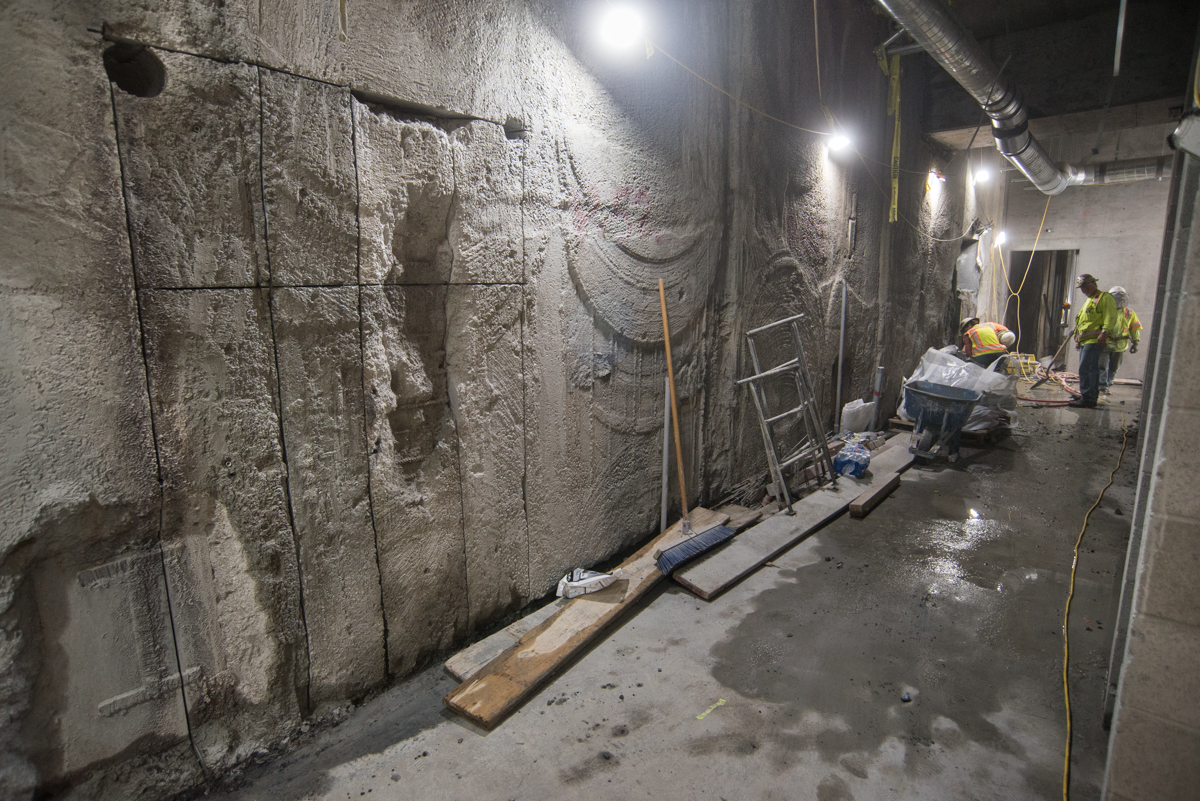 Passageways to between the Yerba Buena/Moscone station box and headhouse are being cut through the slurry wall separating them. Overview

What: Sewer and water line replacement work
Time: 9pm - 5am
When: Monday to Friday, as well as the weekends of July 14-15 and July 21-22
Where: 4th and Howard Street intersections. 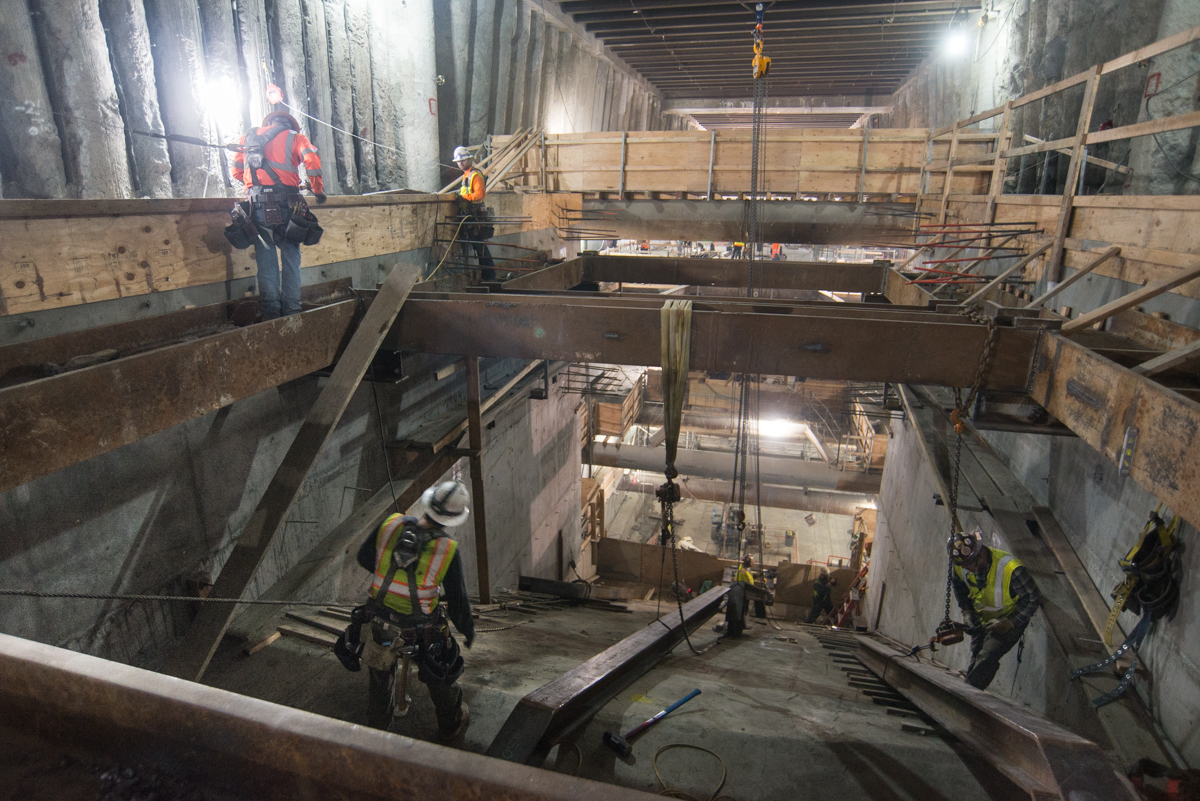 Workers at the south headwall of the construct steel framing and concrete forms for an angled cut where future escalators and stairs will lead to the station platform. Union Square | Market Street Station 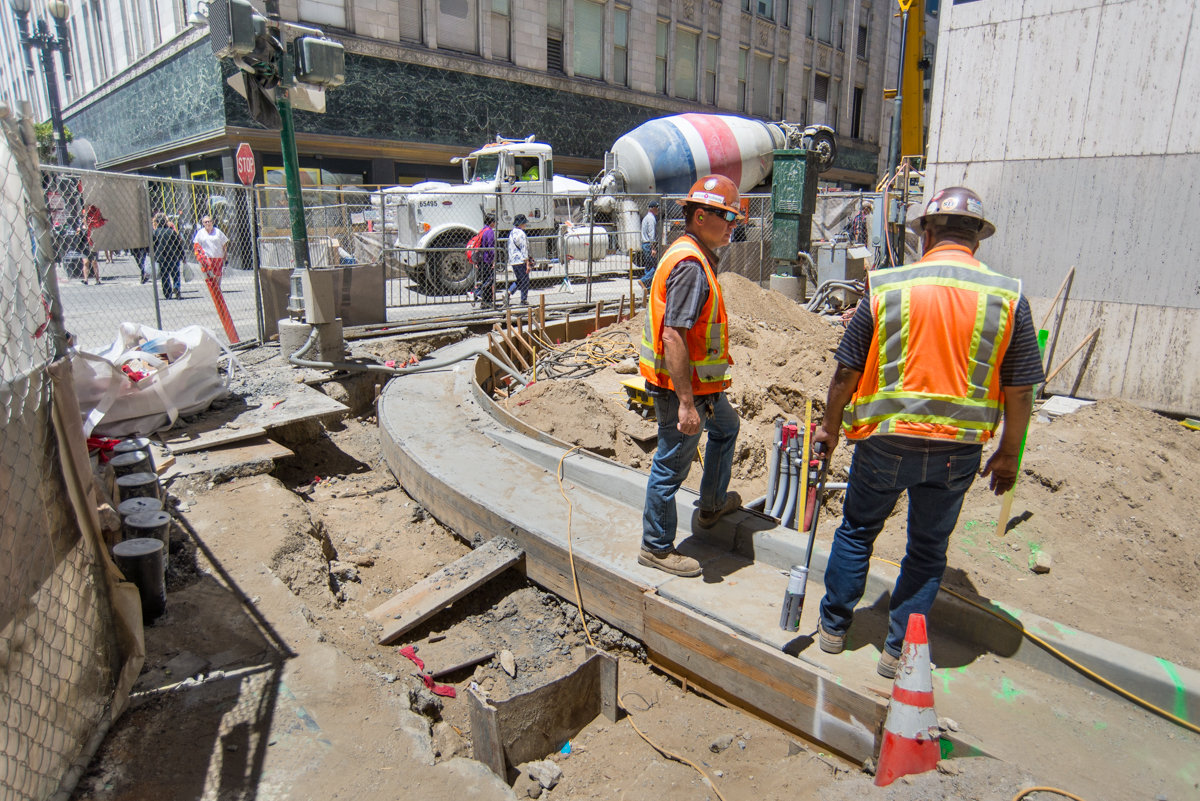 A new curb has been constructed at the northeast corner of Stockton and O'Farrell as part of roadway and sidewalk restoration work. 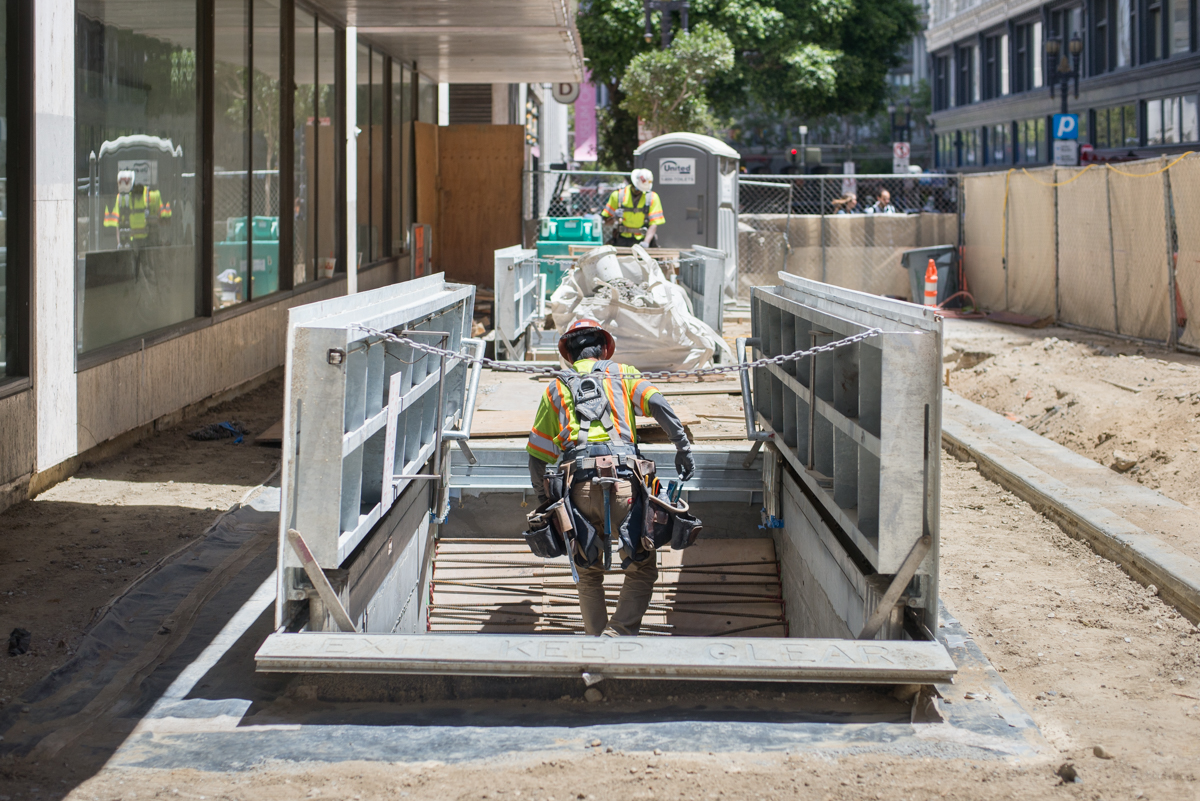 Two open steel hatches mark the final exit of emergency stairways constructed for the upper levels of the station at O'Farrell. Overview 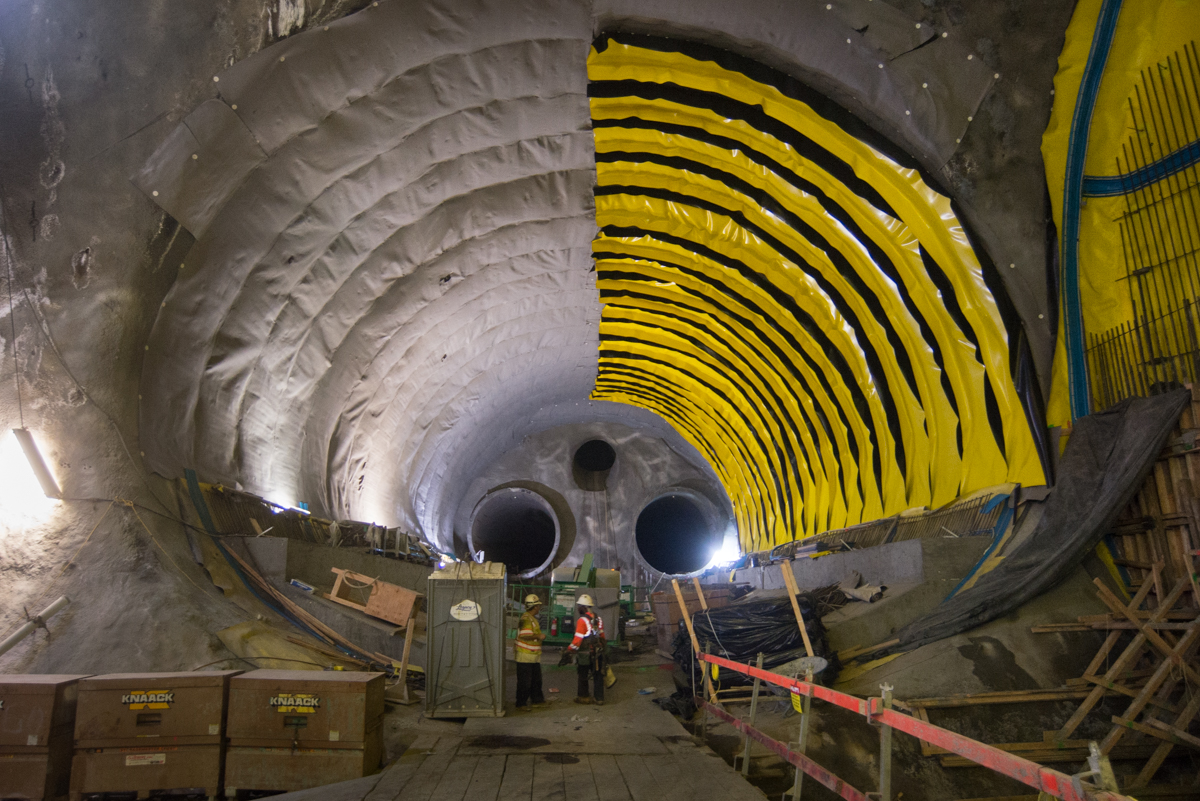 Workers have begun to install sheets of vinyl waterproofing against the east wall and ceiling of the north platform cavern. Chinatown Station The construction of Chinatown Station used the sequential excavation method (SEM), providing a high degree of flexibility and control over ground conditions, thereby greatly reducing the risks of construction. This method of tunnel construction is used worldwide for small to large openings in a variety of ground types ranging from rock to soil.  Excavation of the Chinatown Station site was completed in February 2018. 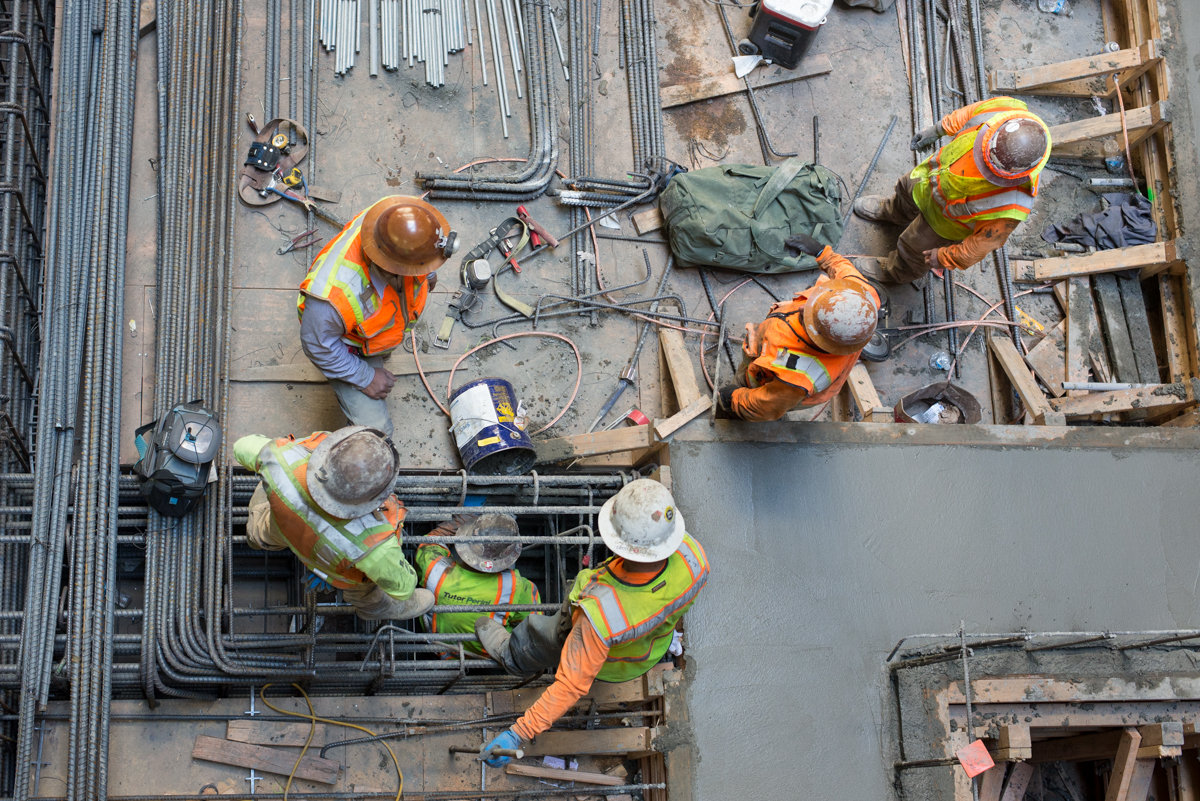 A crew constructs rebar cages which will become part of the platform level floor slab and cross beams inside the station headhouse. 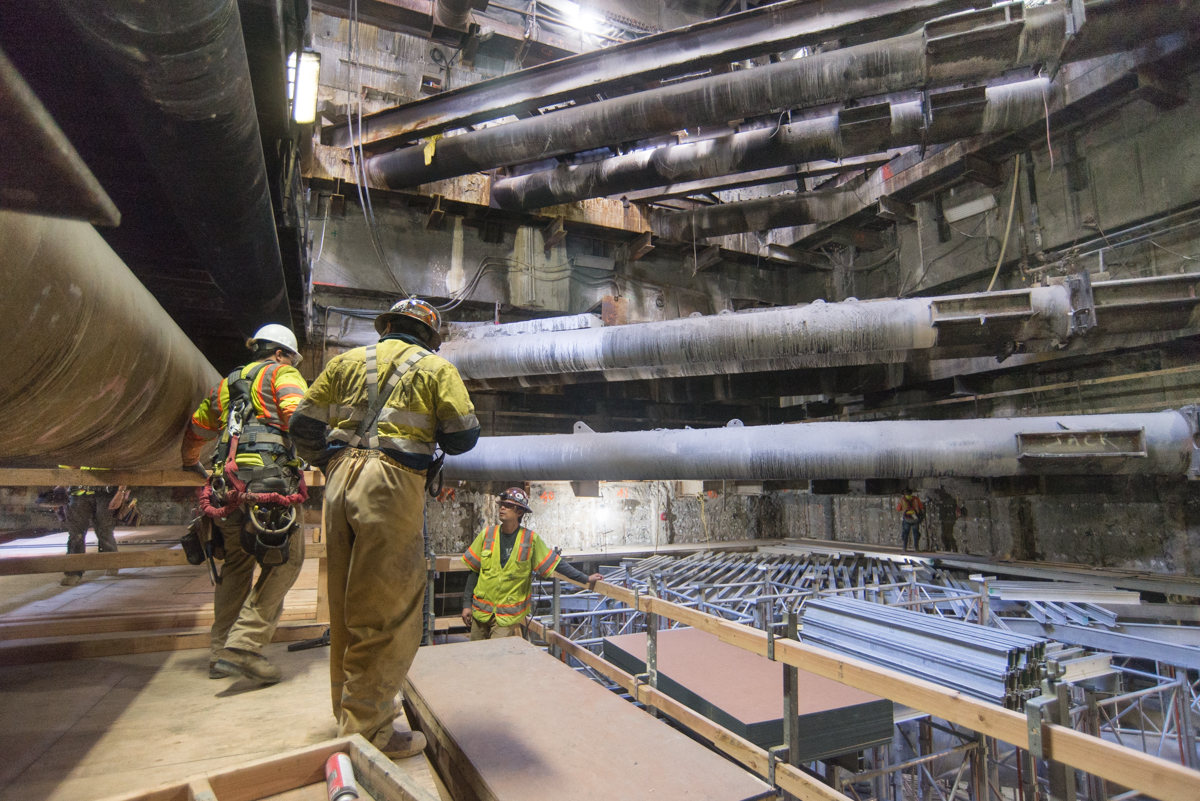 A radio operator inside the headhouse keeps a lookout on worker movement while a line descends from a crane on the roof deck above. Overview