During the next 10 days, Central Subway work continues at sites in SoMa, Union Square, Chinatown and North Beach. This section contains brief updates about what is happening in each neighborhood. For more detailed information, scroll down or click on the links below. You can also find construction, traffic detour, and Muni impact information on our project Google Map. For safety reasons, we encourage the public to follow all traffic and pedestrian notifications posted at the work sites.

Southern SoMa (Harrison to King/Berry): On Townsend Street between 4th and 5th streets, work on utilities continues. On Freelon Street near the east side of 4th Street, excavation of a sewer man-hole continues. Temporary walkways are in place around the construction zones.

Northern SoMa (Market to Harrison): At 4th and Folsom, work to build the Yerba Buena/Moscone Station continues. This includes construction of the station walls within the work site and water line replacement at the intersection of 4th and Folsom. 4th Street from Howard to Folsom streets continues to have two traffic lanes available for travel except this Saturday, August 23, when traffic will converge to one lane of travel from 7 a.m. to midnight.

Union Square: Stockton Street between Ellis and Geary is closed to vehicular traffic to allow for construction of the Union Square/Market Street Station. Work is underway for pile installation to construct the station walls. The west side of Stockton Street between Post and Geary is anticipated to reopen to one lane of traffic on August 23. Until then, please use alternate routes and follow construction signs.

Pile installation takes place at the southwest intersection of Stockton and O'Farrell streets until late September. One lane of travel will be open. Starting August 27, one lane of traffic at this intersection will shift to the south side of O'Farrell. Expect delays and please use alternative routes.

Muni service impact:
The bus stop at Geary and Stockton will be temporarily discontinued until early September. Please board bus on Geary at Powell. Please check back on the weekly Construction Update for the most current information on the re-opening of this stop.

Chinatown:  The contractor started station wall construction at the future station site at Stockton and Washington streets and the adjacent section of Washington Street. Work to replace the water pipeline and install a new fire hydrant on Washington is ongoing.

North Beach: Work continues at 1731-1741 Powell. Street restoration has been completed on Columbus Avenue between Filbert and Union. Sustainable Streets is scheduled to install new street lights and landscaping in the median on this portion of Columbus Avenue. This work will be completed by the end of 2014.

We thank the businesses, residents, shoppers, and commuters of San Francisco for their continued engagement with this significant investment in the extension of our public transportation system. 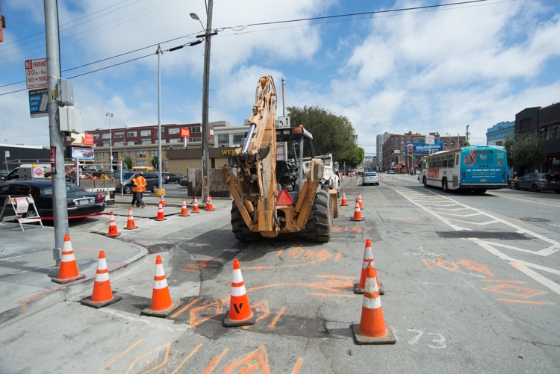 Excavation of a man-hole continues at the corner of 4th and Freelon streets.

On 4th Street between Harrison and Bryant streets, the contractor constructed a major excavation known as a launch box at the site where the Central Subway tunnels began. Underground operations are based here. 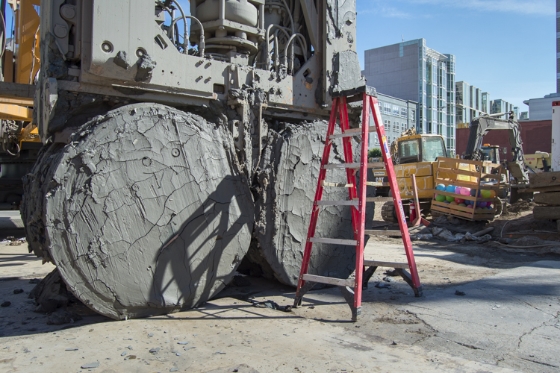 At the future Yerba Buena/Moscone Station site, a hydromill needs cleaning due to dense clay and rocks becoming lodged between the rotating discs.

On 4th Street between Howard and Folsom, work to construct the Yerba Buena/Moscone Station is in progress. The construction of underground station walls and replacement of a water main is ongoing. Night work continues from 7 p.m. to 5 a.m., Monday through Friday. 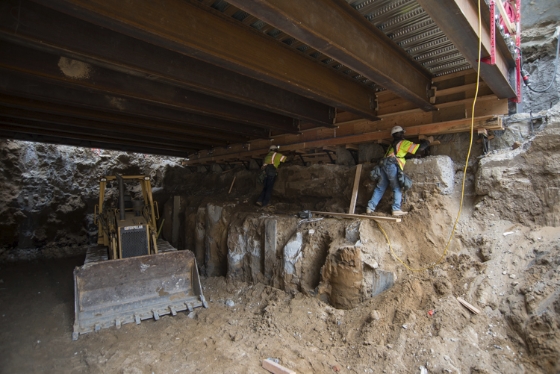 Under Stockton Street, excavation of the Union Square/Market Station continues. Workers have laid metal sheeting on top of roof beams.

On Ellis Street between Stockton and Powell streets, crews will continue with pile installation to construct station walls. 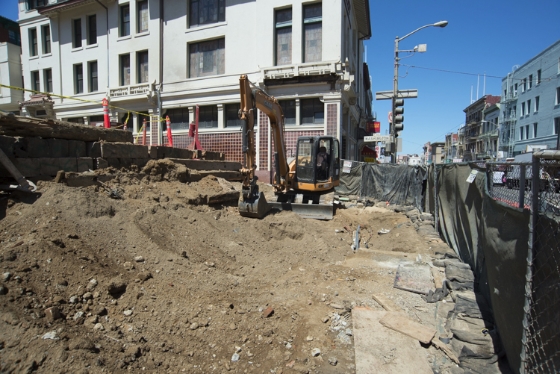 On Stockton Street from Sacramento to Jackson, construction of Chinatown Station is underway and nearby on Washington Street.
Planned construction: 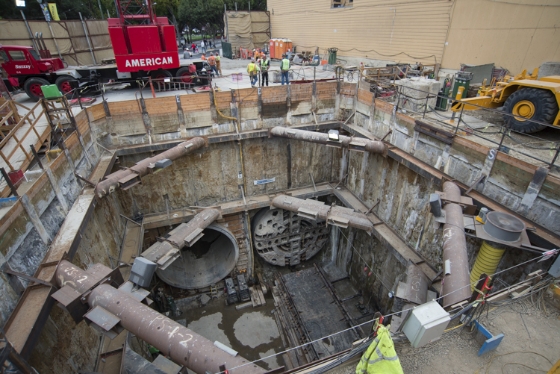 On private property at 1731-1741 Powell Street, the contractor is removing both TBMs.The contractor is on schedule to complete the majority of work at this location in the 4th quarter of 2014. Minor restoration activities will follow and the site will be vacated in early January 2015.

Street lighting and landscaping will be completed on Columbus Avenue between Filbert and Union streets by the end of 2014.