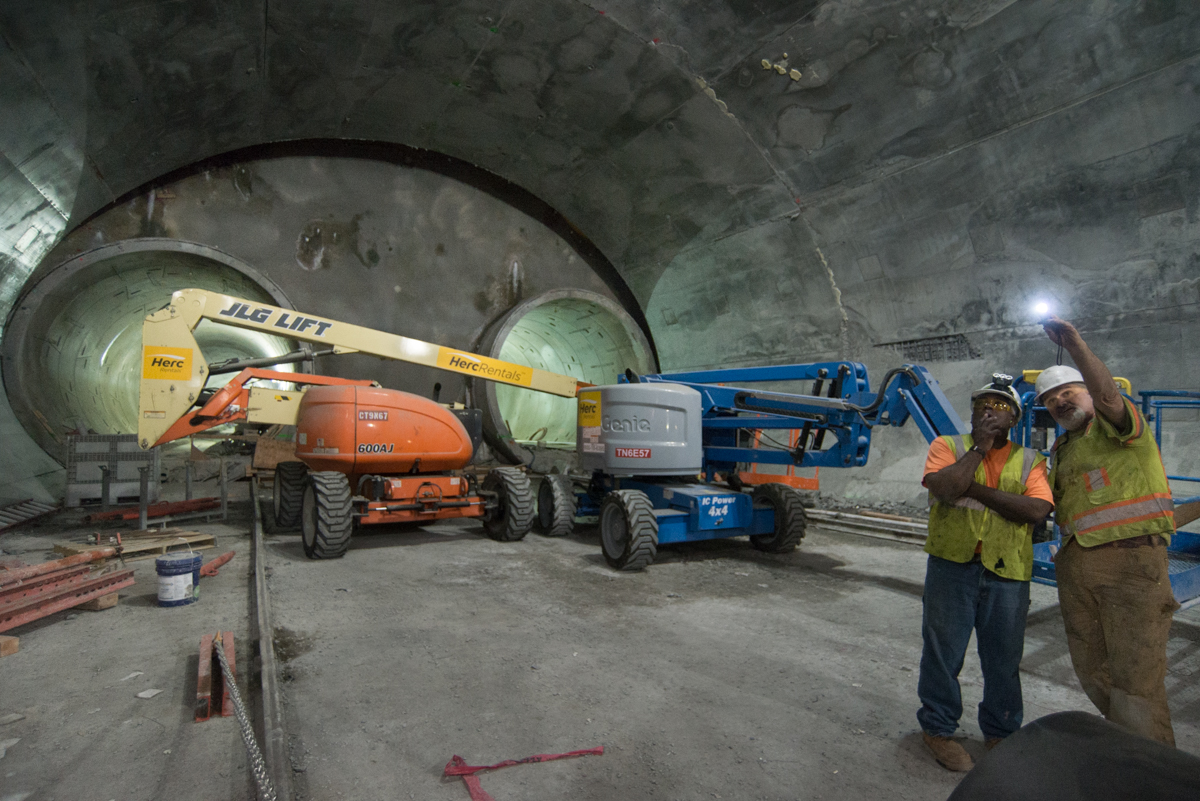 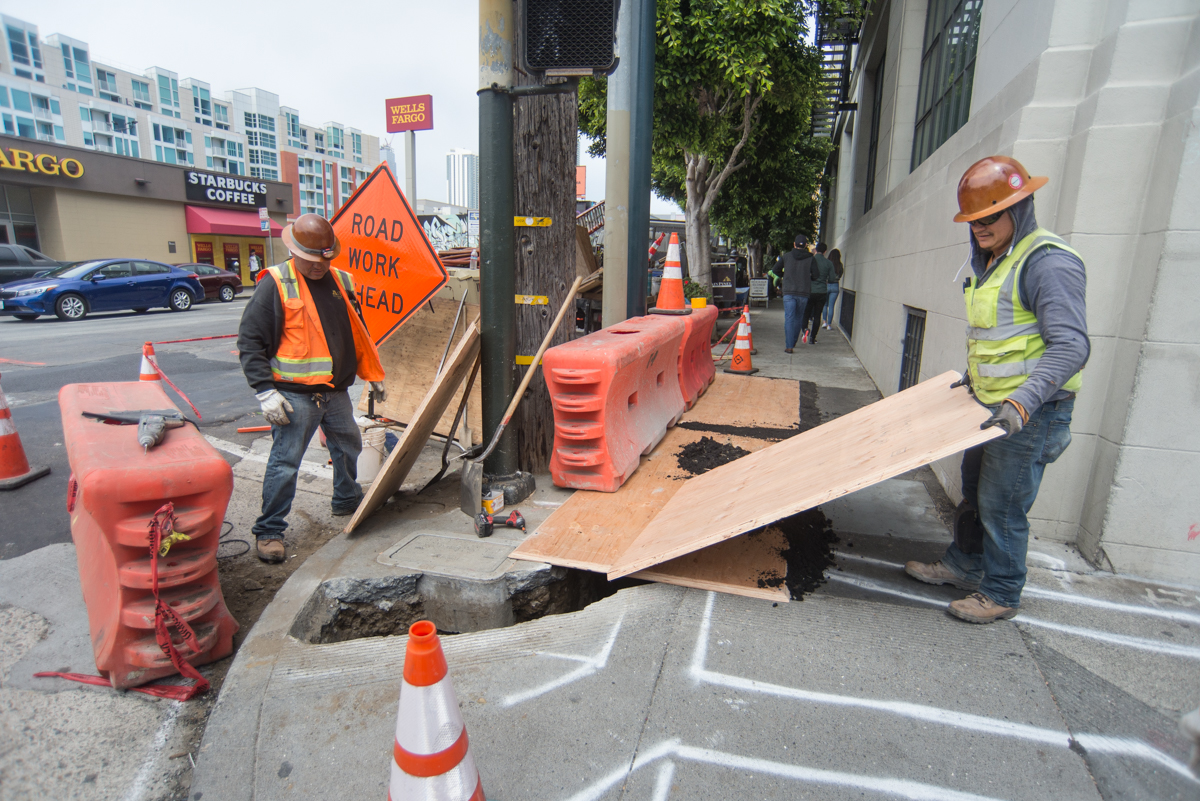 Sidewalk and pavement renovation work may occur on the south side of the 4th and Brannan street intersection.  We anticipate this work to begin this summer.  This work may affect vehicular and pedestrian traffic through that part of the intersection.  Construction of the 4th and Brannan surface station platform is ongoing.  Track installation work is ongoing between Brannan and King.  Some lane closures may also occur at night.  Regular day shift hours are from 7am to 4pm. 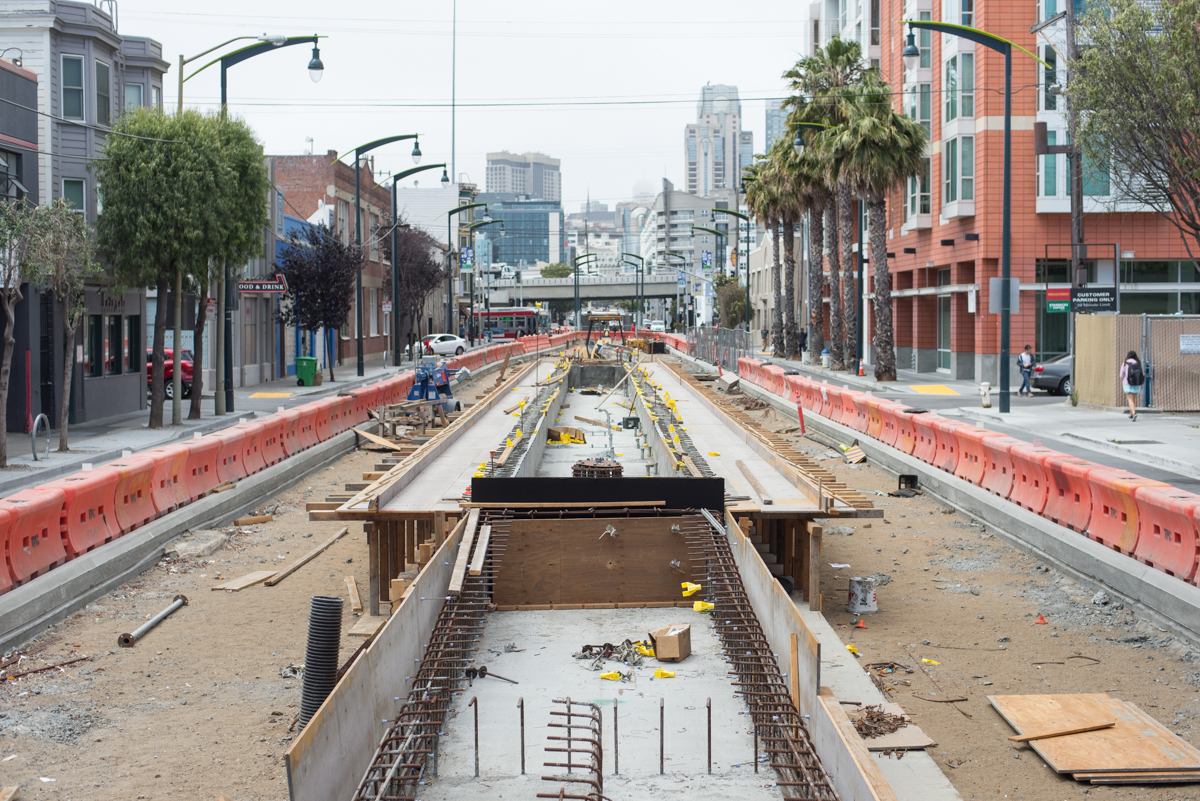 Concrete forms and temporary reinforcing have been built to prepare for construction of the 4th and Brannan surface station platform. 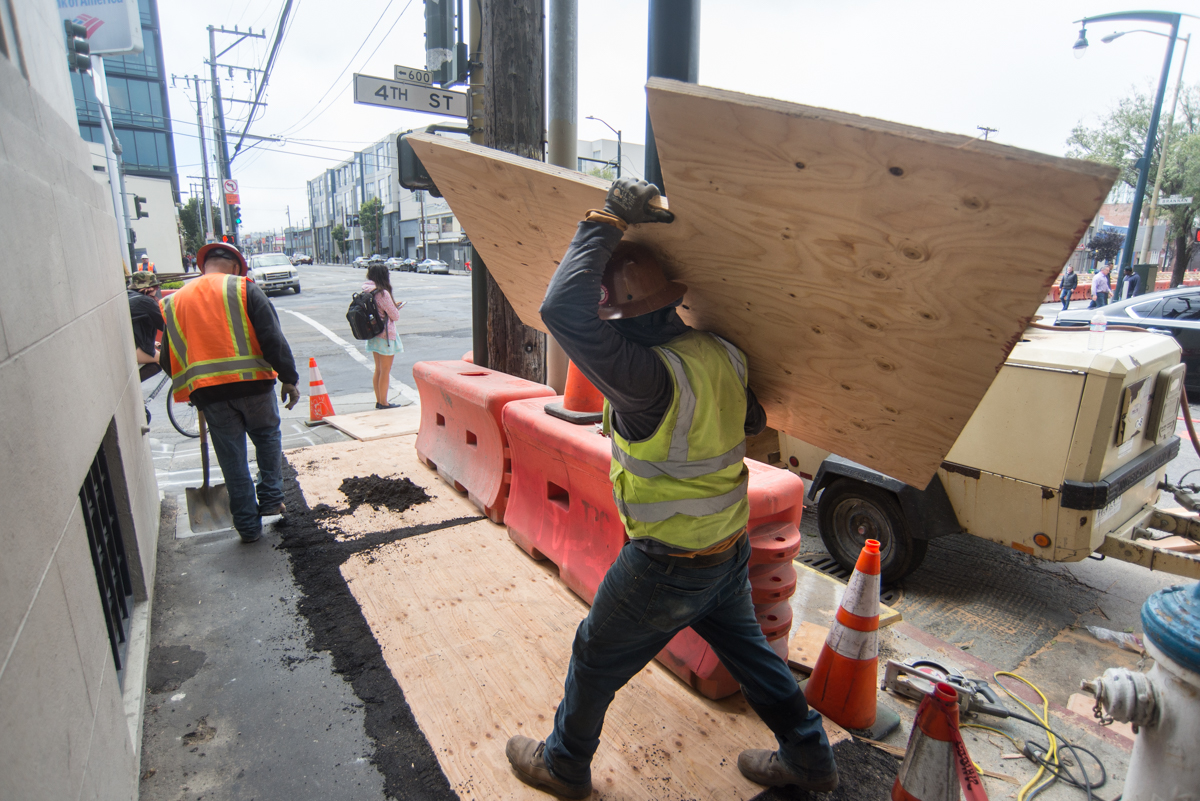 A worker hoists a piece of plywood used to cover a portion of shallow utility trenches along the sidewalk at 4th and Brannan. Overview 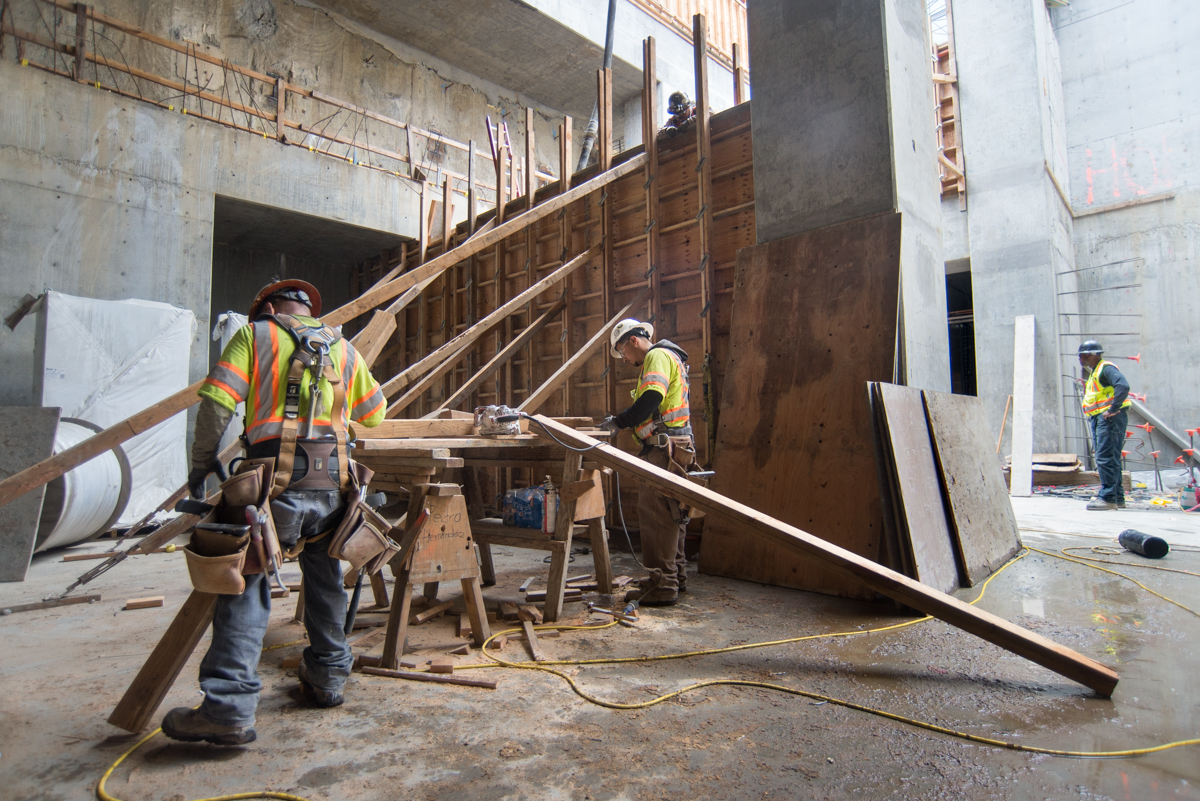 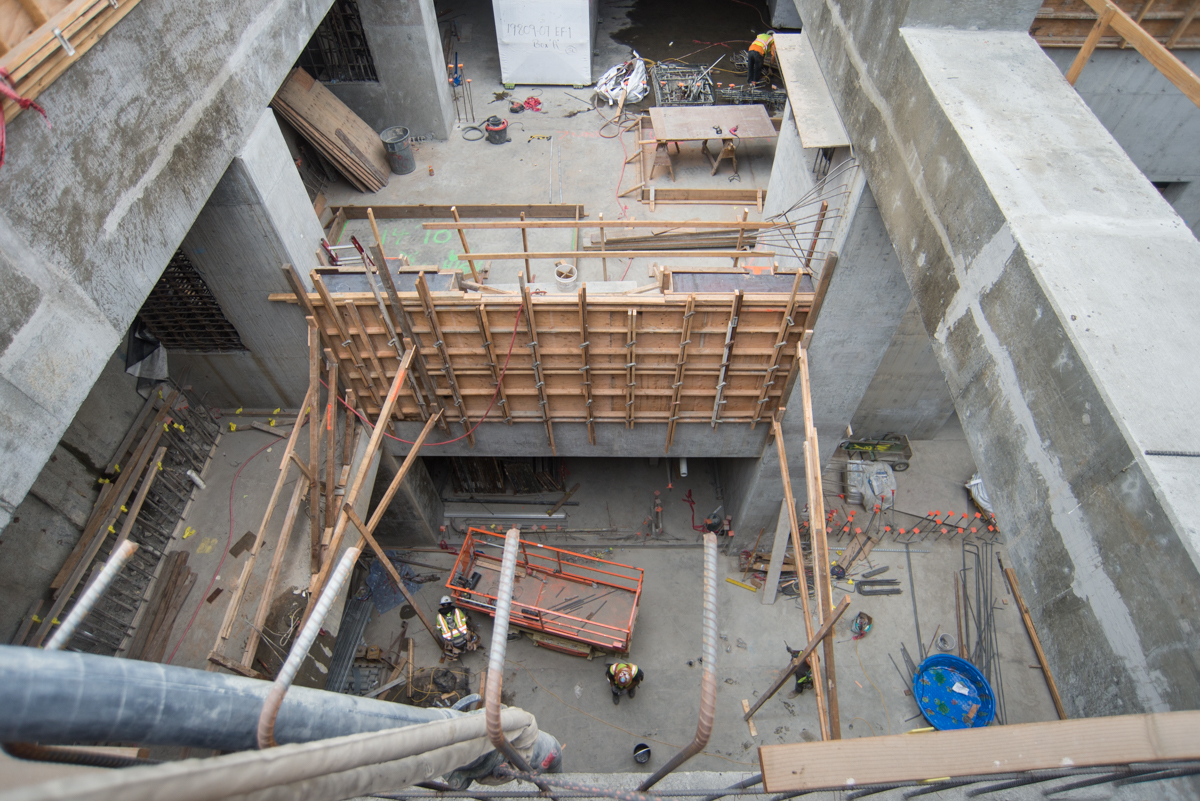 Looking down into an opening in the headhouse roof slab, workers are building additional concrete forms for future escalator supports. 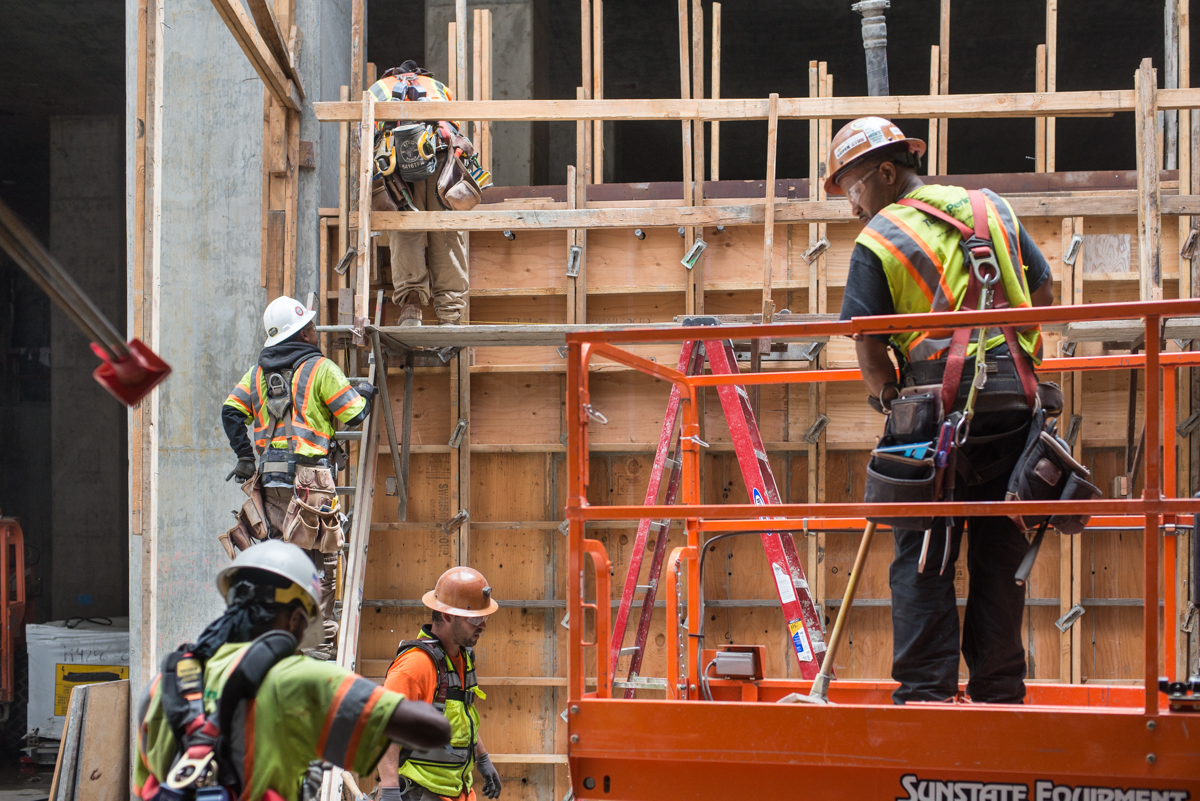 Crew members position themselves to move materials during construction of a support wall on the concourse level of the headhouse. Overview

What: Sewer and water line replacement work
Time: 9pm - 5am
When: Monday to Friday
Where: 4th and Howard Street intersections. 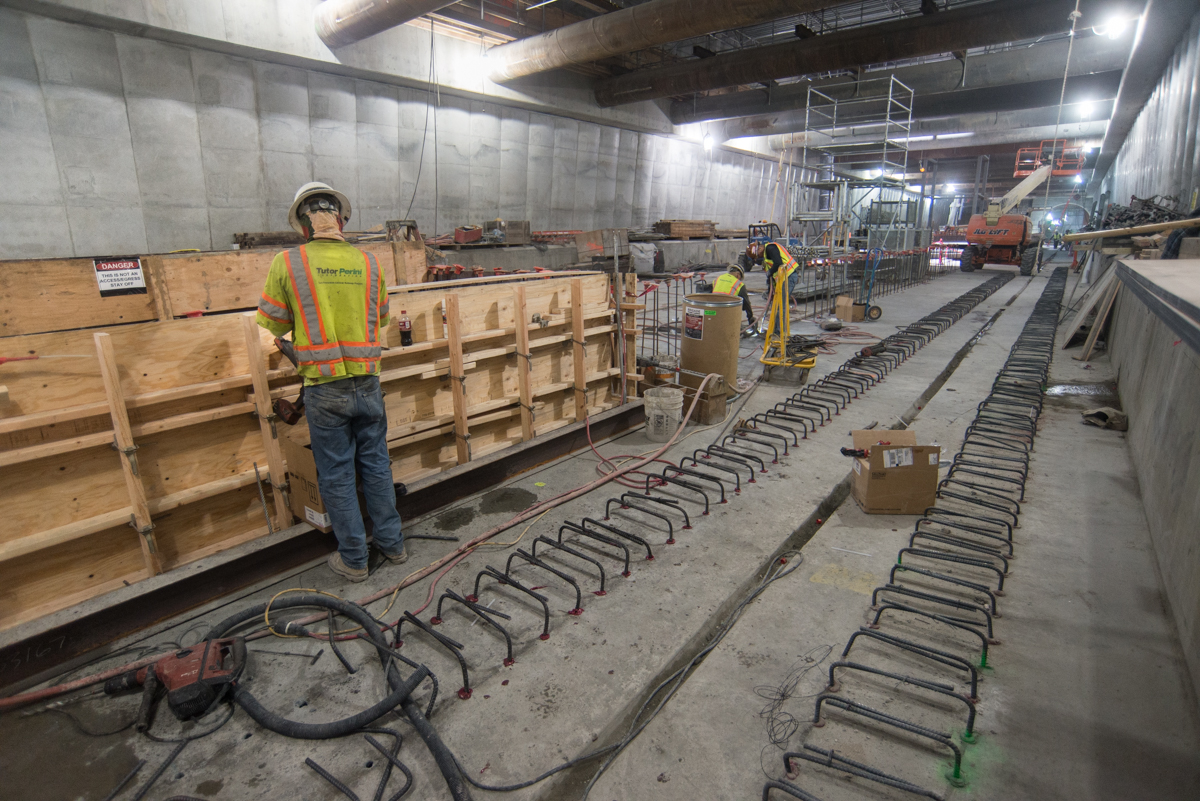 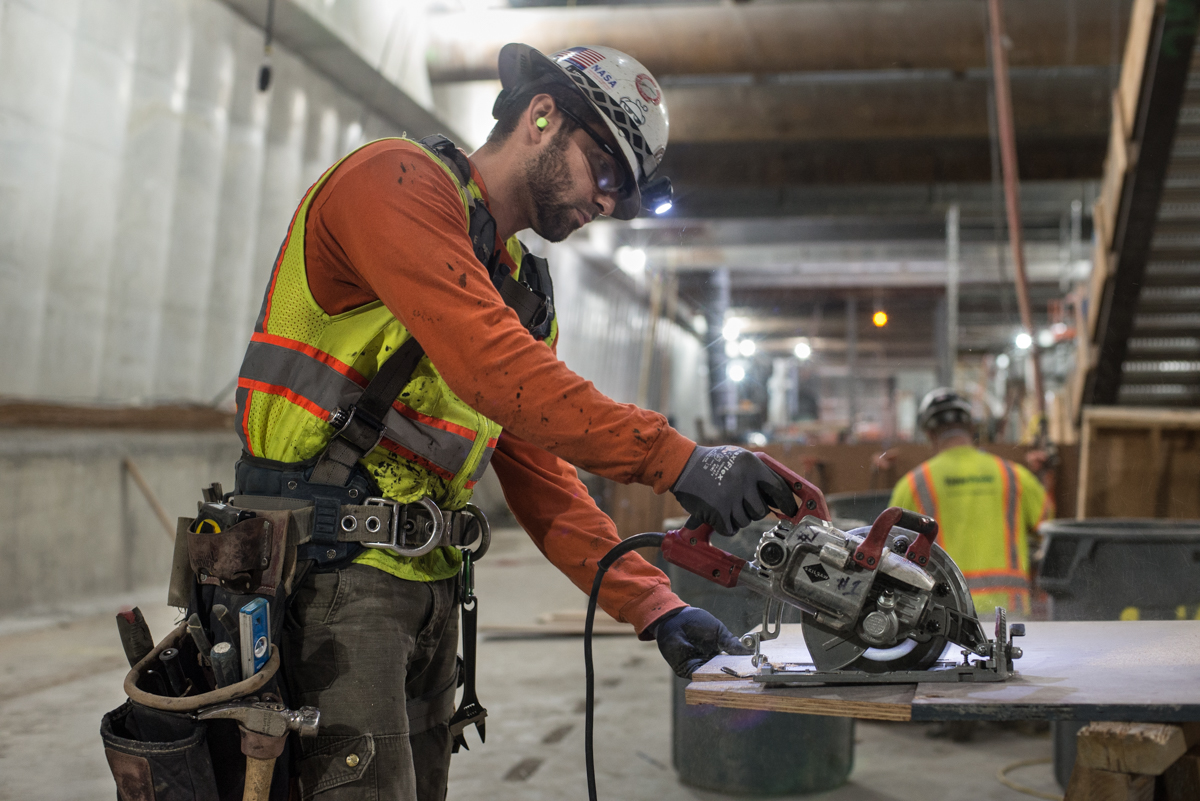 A carpenter cuts angled pieces of plywood as part of concrete formwork to build an internal staircase at the south end of the station platform. 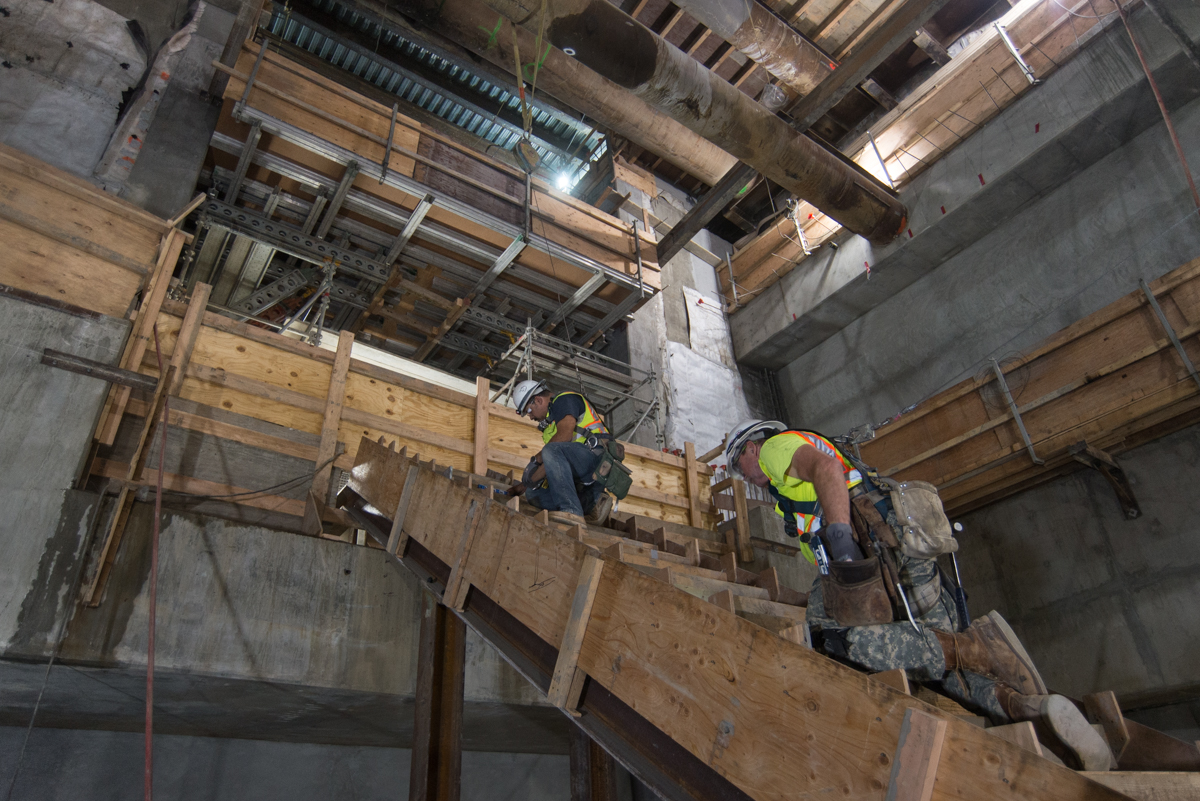 Steel framing, concrete forms, and rebar are being installed to prepare for construction of the staircase at the south headwall. Overview 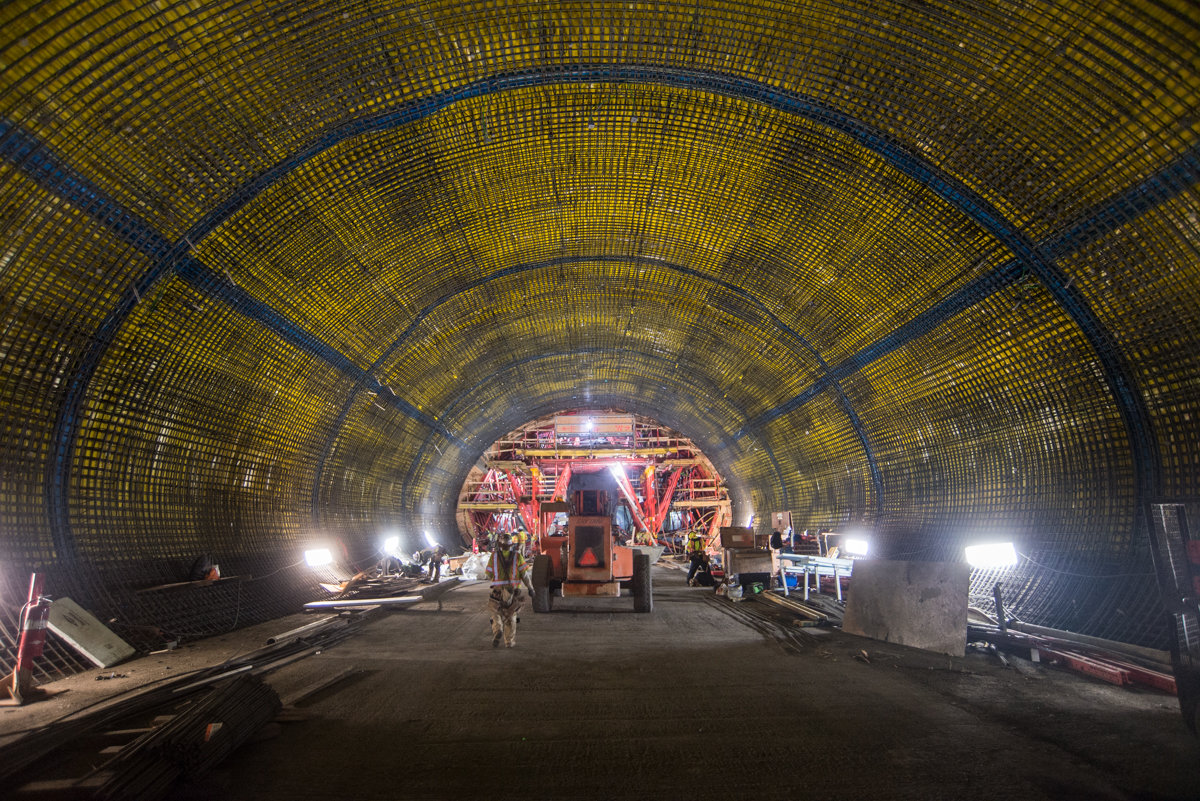 Looking south inside the Chinatown track crossover cavern, the rebar cage for the interior shell has recently been completed through to the station platform cavern to the north. Chinatown Station The construction of Chinatown Station used the sequential excavation method (SEM), providing a high degree of flexibility and control over ground conditions, thereby greatly reducing the risks of construction. This method of tunnel construction is used worldwide for small to large openings in a variety of ground types ranging from rock to soil.  Excavation of the Chinatown Station site was completed in February 2018. 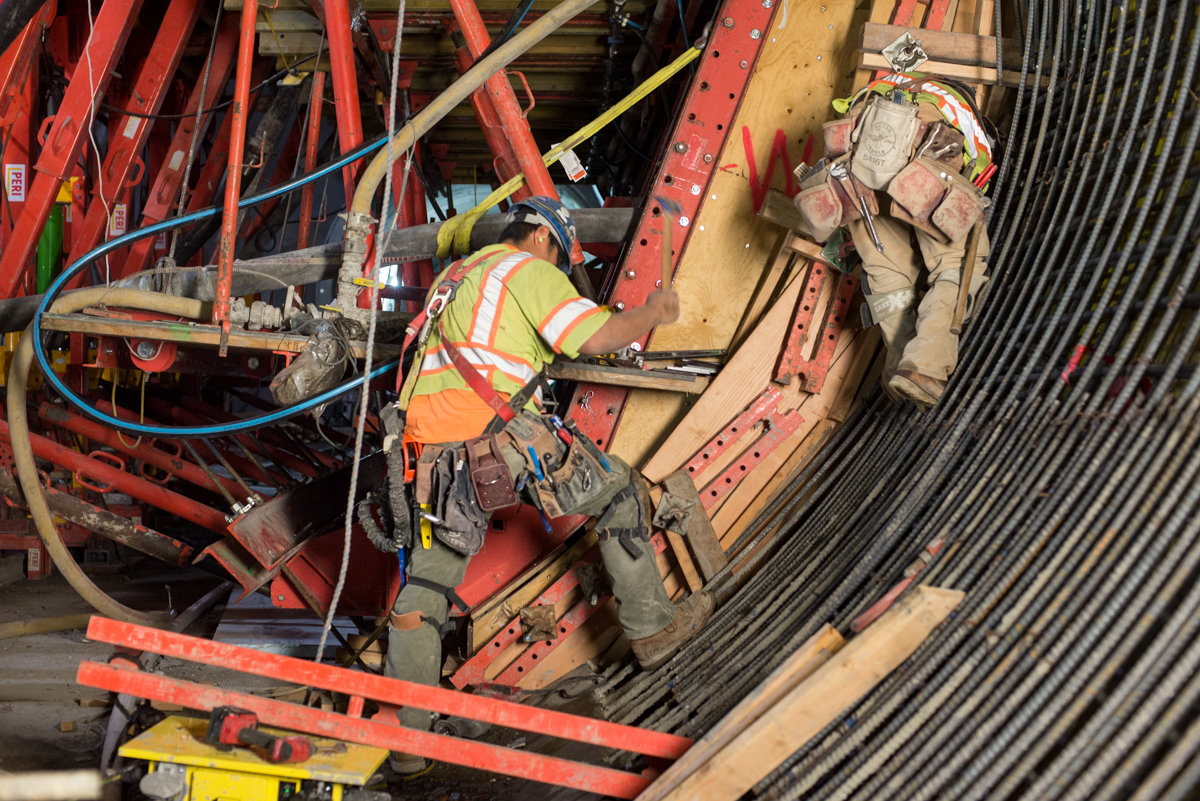 Workers adjust formwork and steel reinforcing ahead of a concrete pour for another section of track crossover cavern walls and ceiling. 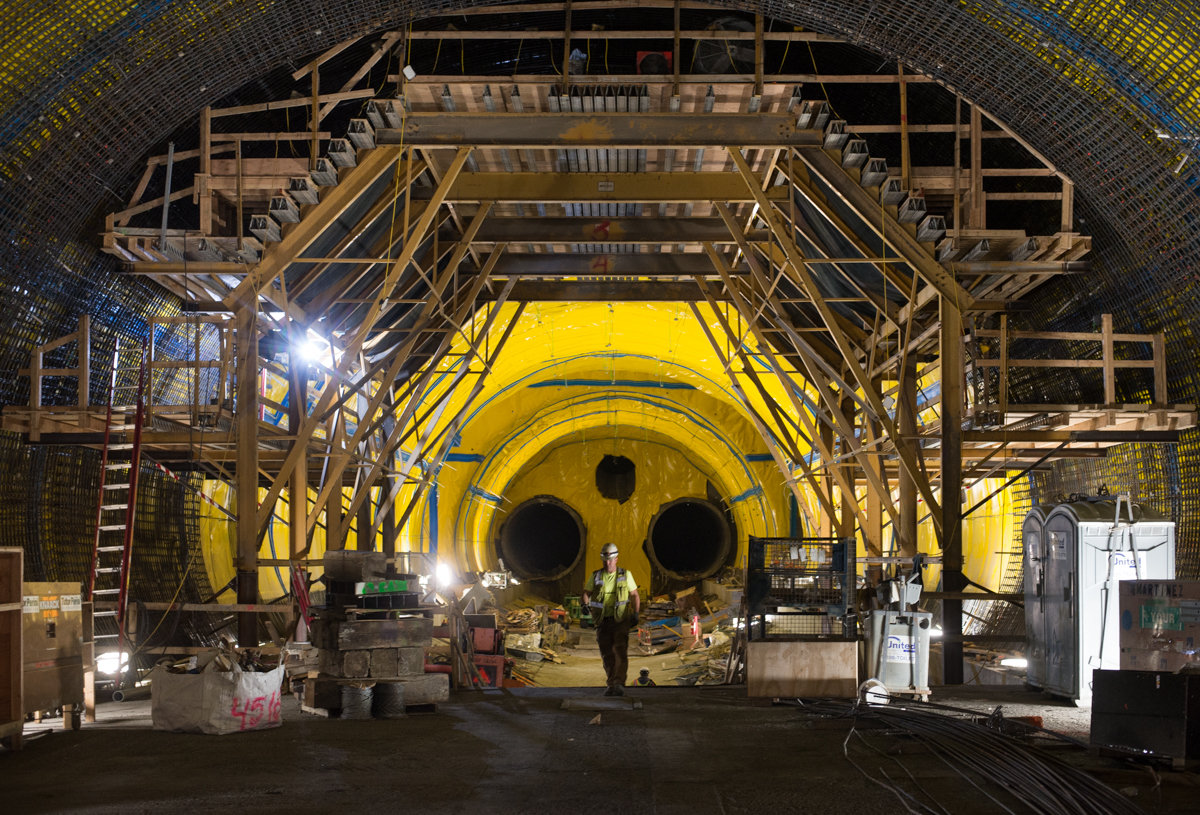 A worker ascends the ramp from the platform cavern to the track crossover cavern, as the rebar cage assembly scaffolding spans overhead. Overview