Share this: FacebookTwitterEmail
Update: The San Francisco County Transportation Authority Board meeting on the Equity Study related to Golden Gate Park, originally scheduled for April 12, will be heard at a later date. We will update this page soon with details on next steps.

March was a big month for the Golden Gate Access & Safety Program!

On March 10, the project team presented formal recommendations for the future of Golden Gate Park. These project proposals were shaped by months of community outreach that resulted in direct engagement with over 10,000 San Franciscans and over 50 organizations across the city. Aimed at enhancing the Park experience for all users, the specific proposals range from keeping JFK Drive car-free, to enhancing the Park shuttle (which is already in the works!) to bringing new mobility choices, like bikeshare, into the park. The SFMTA Board of Directors and the Rec and Park Commission met in person for the first time in two years to hear the proposals.

After an 8-hour meeting, each board and commission voted to recommend the proposals for approval to the San Francisco Board of Supervisors. The support from both groups is meaningful: they voiced confidence in the program proposals to make Golden Gate Park more accessible, equitable, and enjoyable for all, and recognized the over 70% of San Franciscans who expressed support for a car-free JFK and improvements to the Park during our outreach process.

During the meeting with the SFMTA Board and Rec & Park commission, our project team shared key points from the past 22 months of implementing the Golden Gate Park Access & Safety Program. To recap:

In terms of next steps for the future of Golden Gate Park, there are several key events to look forward to:

Thank you for your ongoing support and interest in the future of Golden Gate Park. We look forward to sharing more with you in the coming months. 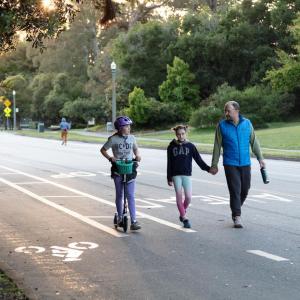