Recently SF Public Works installed two traffic circles along Euclid Avenue, at Parker and Collins Streets in addition to other measures intended to slow vehicle speeds along Euclid between Masonic and Arguello Avenues.  Since construction began in December the SFMTA has received numerous questions and comments from many in the community about these circles.  This update is meant to provide background on this traffic calming effort and answer common questions that we have been fielding.

The planning effort that led to the traffic calming measures currently under construction originated from the Laurel Heights/Jordan Park Traffic Calming Project, a community-driven, comprehensive traffic calming plan for this neighborhood.  The Project, led by the SFMTA, was initiated in response to the numerous requests for traffic calming in the neighborhood that the SFMTA had been receiving from many community members over the years.  Broadly, the intent of the Project was to address speeding concerns, improve pedestrian safety and comfort, and reduce commercial traffic through the neighborhood.

Data collected along Euclid Avenue confirms that traffic-related safety is an issue on the street.  From January 2011 through June 2016 there were 17 reported collisions along Euclid Avenue, from Arguello to Presidio, including an incident in which a three-year old child was critically injured while in a stroller in the crosswalk at Euclid/Parker.

The project was developed from Fall 2011 through Fall 2012 during which time SFMTA staff:

The widely publicized community workshops were held in September 2011 and October 2012.  Recommended locations for traffic calming in the plan correspond to the community’s assessment of the most critical traffic-related issues.

Euclid Avenue is not designated as an arterial street, like parallel California Street and Geary Boulevard, and like the higher volume Pine and Bush Streets that feed into Euclid.  Rather, Euclid is designated as a “Neighborhood Residential” street, which is intended to facilitate travel to local destinations in the neighborhood, not traffic traveling ‘through’ the neighborhood.  More information on roadway designations in San Francisco can be found here.  This was reinforced through our outreach process, with many of your neighbors emphasizing the large numbers of vehicles along Euclid as well as the need to slow vehicles and encourage compliance with the pedestrian right-of-way.

A copy of the final Traffic Calming Plan can be found here.

Implementation of the Traffic Calming Plan has taken place over three phases.  The first phase consisted of the following measures, implemented in 2015:

Other safety improvements initiated by the SFTMA, but not scoped in the original Traffic Calming Plan, have already been implemented.  These include:

In late 2016 a total of fifteen speed humps and a traffic island were installed on many of the cross streets in the neighborhood, including:

The current construction along Euclid Avenue represents the third, and final, phase of implementation of the Traffic Calming Plan.  Measures include:

We recognize that the traffic circles represent a highly visible change in not only the aesthetic of Euclid Avenue but also how one must navigate the corridor.  Some confusion is expected as these new devices require a change to the everyday routine of getting around your neighborhood.

Traffic calming circles are raised islands in the center of an intersection.  The intent of the circles is to slow vehicles traveling through intersections and to reduce the number of conflict points at the intersection.  These devices are different than roundabouts, which are typically intended to safely facilitate larger volumes of traffic.

Drivers should treat the traffic calmed intersections the same as a traditional four-way intersection.  All approaches to the circles on Euclid Avenue continue to maintain all-way stop control; drivers must stop for traffic in the circle and always yield to pedestrians in the crosswalks.  Traffic must travel to the right in a counter-clockwise direction in order to travel through the intersection. If two vehicles arrive at the intersection at the same time, the vehicle to the left shall yield the right-of-way (just as with any other STOP controlled or uncontrolled intersection).

Traffic circles are not as common in the Bay Area compared to other areas of the U.S.., but there are still local examples to draw upon.  The five-legged Dewey Circle at the intersection of Dewey Boulevard and Taraval Street in San Francisco is one good example of a traffic circle under all-way stop-control.  Another circle under stop-control is at Division/Townsend/8th Street, and two additional circles are currently under construction on McAllister Street at Steiner and Lyon.

The circles are designed to facilitate both passenger and emergency response vehicles.  During the design phase, engineers conducted a turning study that demonstrated passenger vehicles can maneuver without encroaching into the crosswalks.  Staff also conducted turn templates of Fire vehicles operating around the circles as well as a real-life ‘cone test’ of the proposed traffic circles that proved Fire vehicles can safely operate around the new circles.  The circles were approved by both SFFD and SFPD.

As construction progresses and cones, barricades and other equipment are removed from the circles, drivers should find them easier to navigate.

Evaluation:  SFMTA will continue to monitor conditions along Euclid and, in particular, at Parker and Collins Streets.  After construction equipment has been removed we will initiate a more formal evaluation of traffic operations to indicate whether any further design changes are necessary.  And, as always, we will rely on reports from residents such as yourself who live in the community.

Currently we are evaluating whether to pull the crosswalks back further from the intersection, if more prominent and/or additional warning signs are needed, and whether other tweaks to the design are warranted.  We can continue to report back to the community in upcoming months as our evaluation processes progress.

Please continue to let us know if there are any further questions and if conditions on the street do not change once the construction equipment is removed. 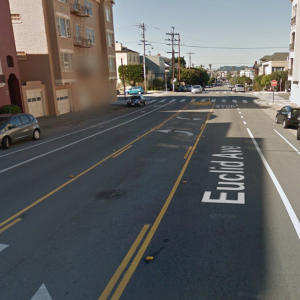