After nearly three years of planning and public engagement, SFMTA staff are preparing to bring the proposed parking changes for Phase One of the Page Street Neighborway to the SFMTA Board of Directors for approval. Originally slated for consideration in July, the MTA Board meeting is now scheduled for Tuesday, September 4, 2018 at City Hall Room 400 starting at 1pm.

The proposed parking changes would replace up to 12 parking spaces on and adjacent to Page Street for wider sidewalks and landscaping. Additional meeting information can be found on the SFMTA Board webpage as the date approaches, and more details regarding the project proposal are available at www.sfmta.com/pagestreet. Comments on the proposal can be sent to One South Van Ness Ave, 7th Floor, San Francisco, CA 94103, care of the SFMTA Board of Directors, or by emailing feedback prior to September 4 sustainable.streets@sfmta.com or casey.hildreth@sfmta.com with the subject ‘SFMTA Board of Directors.’ Submissions are public record and will be taken to the attention of the SFMTA Board.

A separate but related proposal to test circulation changes at the intersection of Page and Webster streets (diverting eastbound traffic on Page Street in front of John Muir Elementary School) is undergoing additional review based on public comment and will be considered at a future MTA Board meeting. A project update will be prepared as the proposal and meeting date are confirmed.

In March 2017, after 18 months of planning and public outreach, the SFMTA shared a draft final proposal for the first phase of the Page Street Neighborway, between Webster and Market streets. Recommended improvements included:

Since the March 2017 open house, SFMTA staff met with residents of Hayes Valley Apartments on March 21, 2018; met with families of John Muir Elementary at a principal chat on May 17 and provided a project flier in both English and Spanish for distribution in students’ weekly bulletin; held two outdoor “office hour” events on May 29 and May 30; and held a public hearing on June 1. In this time, the SFMTA has received approximately 80 emails in support of the project and a handful of comments in opposition to the loss of on-street parking.

SFMTA also confirmed with the San Francisco Public Utilities Commission (PUC) that Green Stormwater Infrastructure (GSI), or ‘rain gardens,’ can be included with most sidewalk extensions. GSI is a term that describes strategies that take advantage of natural processes to reduce, slow down and/or treat stormwater runoff – thereby reducing stress on the City’s sewer system. GSI differs from traditional “grey” stormwater infrastructure (underground pipes) in that it provides multiple community benefits such as street-level landscaping and enhanced habitat/ biodiversity in addition benefitting sewer system functions.

Due to the way certain streetscape changes are legislated, the proposal for a raised intersection at Buchanan Street is not approved by the SFMTA Board, but by Public Works as part of the detailed design phase.

A composite of the two main proposals are summarized in the Page St Neighborway Phase 1 Summary Graphic. 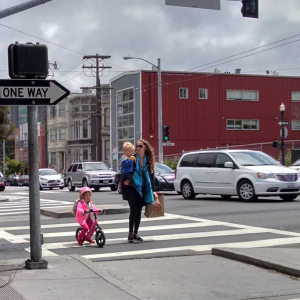