Safety improvements on Geary at Commonwealth/Beaumont 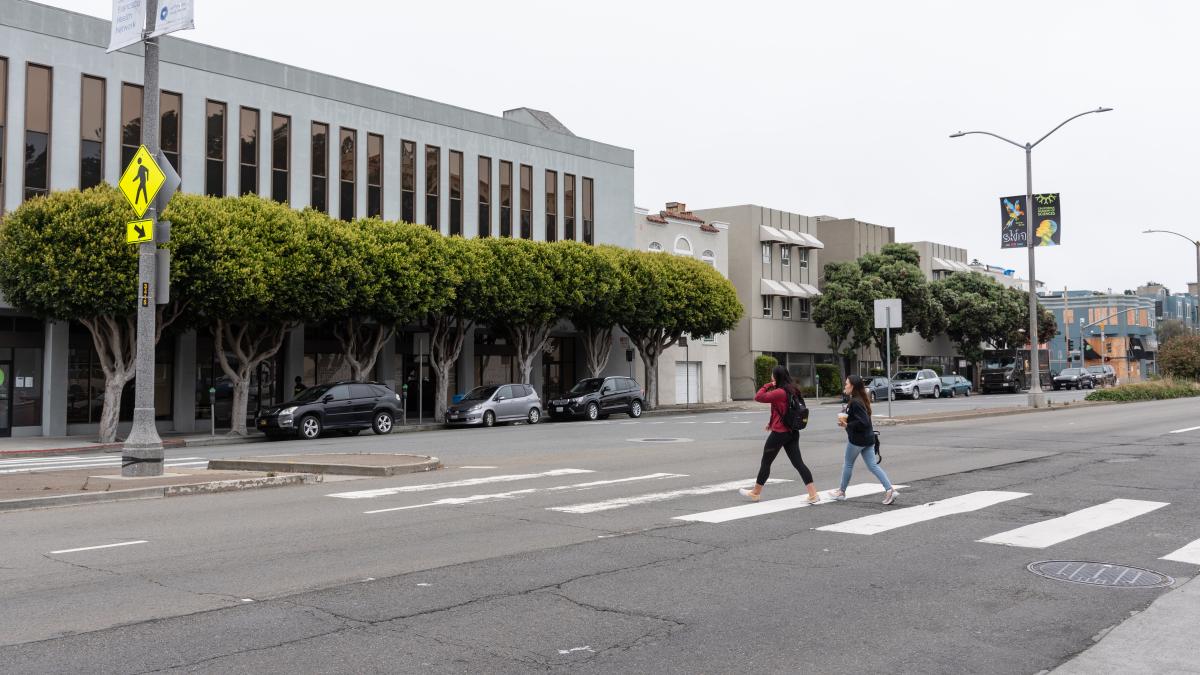 In response to requests from neighbors, and as part of San Francisco’s Vision Zero goal to eliminate traffic deaths, the San Francisco Municipal Transportation Agency (SFMTA) is installing pedestrian safety improvements for people crossing Geary Boulevard at Commonwealth/Beaumont avenues. Geary Boulevard is one of San Francisco’s high-injury corridors, and collisions have been reported at the intersection of Commonwealth/Beaumont in the past.

Geary is also a busy east-west thoroughfare that carries 100,000 people per day on buses and cars, so keeping traffic moving while making the streets safer are both priorities. While the SFMTA has recently made improvements to help make drivers more aware of people crossing Geary, such as high-visibility crosswalks and pedestrian crossing signs, we are also installing additional improvements at this intersection.

As part of the Geary Rapid Project, a new traffic signal will be installed at the existing crosswalk at Commonwealth/Beaumont. This change will give a walk signal to pedestrians crossing north or south across Geary and stop east/west vehicle traffic. To maintain traffic flow on Geary, this signal will be synchronized with adjacent signals and only be triggered by pedestrians when needed by pressing a button. The new signalized crosswalk will have the pedestrian countdown feature and be complemented by new pedestrian bulbs and new streetlighting. 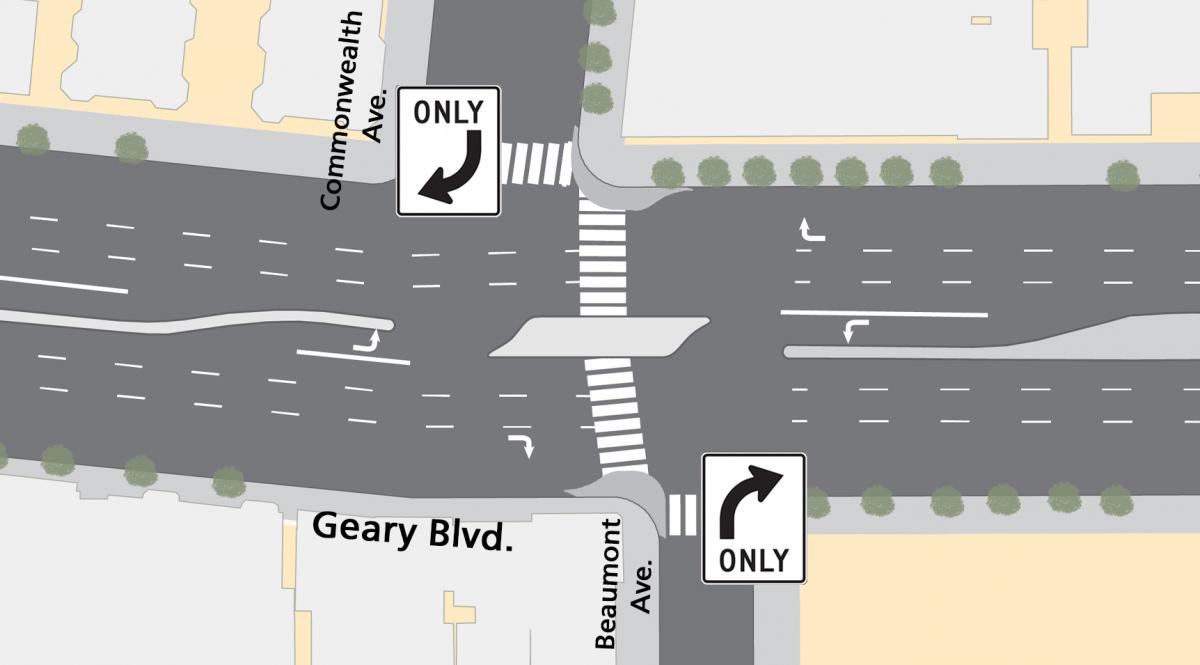 Thank you to community members who shared their feedback. In fall 2019, we conducted an online survey, collecting comments from neighbors via a bilingual mailer, email/text campaign, posters in the neighborhood and an open house event at Earth’s Coffee. Of 152 respondents, 65% were in favor of the proposed changes, with 26% against the proposal and 9% unsure. 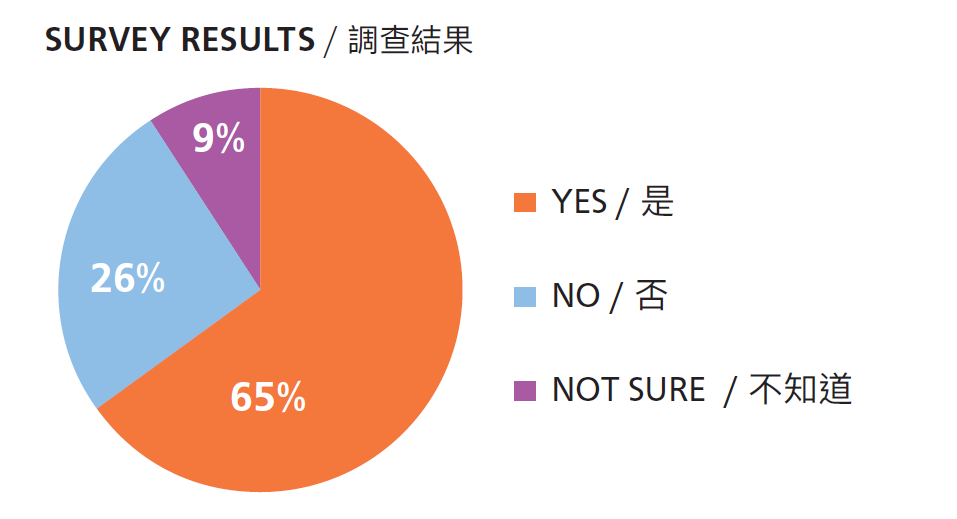 Installing a traffic signal would require making Commonwealth and Beaumont right-turn only onto Geary Boulevard. Is this a tradeoff you would support to improve safety for pedestrians crossing at this intersection? / 安裝一個交通信號燈會使Commonwealth和Beaumont街只限凖車輛右轉入Geary

Some comments we heard were:

Of the 102 people who supported the proposal, ten stated in the open response section that they would cross at Commonwealth/Beaumont more frequently if a traffic signal was installed. Of the 41 people opposed to the proposal, 28 stated that they did not think a full traffic signal was needed or that the current conditions are safe enough; nine cited impacts to their drive, many mentioning Parker Street. Neighbors also provided suggestions for consideration during implementation.

This proposal was heard on January 24 as part of the regularly scheduled SFMTA Engineering Public Hearing. The meeting agenda and materials were available before the meeting and remain accessible here.

Based on feedback received through the community survey, phone calls, letters and public comment at the hearing, the proposal was approved by the City Traffic Engineer. This decision is final. These safety improvements are expected to be implemented in late 2020.

The turn prohibitions improve pedestrian safety and help minimize the traffic impacts for cars and buses traveling on Geary Boulevard. About 100,000 people in cars travel east-west along Geary daily, compared with about 1,000 daily travelers south on Commonwealth or north on Beaumont. Over 70% of these north- and southbound vehicles make right turns onto Geary. Making Commonwealth and Beaumont right-turn only onto Geary allows a new signal to only stop traffic on Geary when a pedestrian pushes a button to cross, rather than stopping traffic every 90 seconds to let vehicles through. Additionally, right turns onto Geary do not conflict with pedestrians crossing Geary.

Installing a flashing pedestrian warning beacon is one of several tools in our toolkit to improve safety for people walking. However, on a major thoroughfare such as Geary Boulevard with multiple travel lanes, higher speeds and greater traffic density, a flashing warning beacon is not as effective as it would be on a calmer street where driver yielding rates are higher. It only takes one person driving through the warning beacon to cause a collision, even if other vehicles stop. The most effective safety solution is a fully signalized intersection, which requires vehicles to stop by law and typically has very high driver compliance. The cost of installing a full traffic signal is only marginally higher than installing flashing pedestrian warning beacons since they both require similar underlying infrastructure.

In the past 10 years, there have been three reported injury collisions at this intersection. The most recent involved a vehicle getting rear-ended while stopping for a pedestrian crossing. In the next, a pedestrian crossing southbound was hit and injured by a westbound vehicle in the left lane that did not stop even though the vehicles in the right and center lanes had already. The third collision involved a westbound vehicle hitting a vehicle in the process of making a southbound left-turn onto Geary. All three of these collisions took place during the day in clear weather.

Part of the SFMTA’s mission is to ensure that our streets are safe and accessible to everyone, including seniors and people with disabilities. There are several senior facilities in the area, including a home care center near the intersection, making it particularly important to have a safe crossing option for those with limited mobility at this location. While many pedestrians cross at Parker or Stanyan, we have observed over 35 people crossing at Commonwealth/Beaumont within one hour during the PM peak (Wednesday, April 22, 2015; 4:45-5:45 p.m.), and understand that more people may cross here if they felt safer at this location. It is important to ensure that people walking—current and future—can safely reach their destinations.

This change may impact the routes some drivers take, but since the impacted traffic volumes are observed to be low and spread throughout the day, we estimate that the impacts to traffic on neighboring streets will be minimal. Based on traffic counts taken on April 22, 2015, we observed a total of 18 vehicles that may be impacted by the turn prohibitions during the PM peak hour: 11 southbound left turns from Commonwealth to Geary eastbound, 2 southbound throughs, 4 northbound left turns from Beaumont, and 1 northbound through. This is a spot observation to provide a rough estimate of traffic volumes, but appears consistent with current informal observations. Once this change is implemented, many of these vehicles will likely change their route, choosing to travel on a street other than Geary, such as Euclid Avenue or Anza Street; or they may choose to access Geary from another point, such as from Parker Street. Based on the latest traffic counts, if all southbound vehicles using Commonwealth chose Parker instead, daily traffic volumes on southbound Parker would increase by less than 6%. Similarly, if all northbound vehicles impacted by the proposal moved from Beaumont to Parker, daily traffic volumes on northbound Parker would increase by less than 3%.

While collecting feedback in fall 2019, we heard concerns from some neighbors about potential traffic increases on Parker Street. To monitor this, we will conduct before/after traffic counts on neighboring streets in order to determine whether any mitigations could be made.

Because the traffic signal will be synchronized with adjacent signals and only triggered when needed by a pedestrian, impacts to traffic and bus service are expected to be minimal. This signal, along with all others on the Geary corridor, will also have Transit Signal Priority (TSP) equipment so that buses can communicate with the signal to try to extend the green light when approaching the intersection and make it more likely buses will not have to stop.

The Geary Rapid Project will install new pedestrian bulbs, extending the sidewalk at the intersection into Geary Boulevard on both sides of the crosswalk (at Commonwealth and Beaumont). This improves safety by shortening the crossing distance, making pedestrians more visible to vehicles, and slowing down vehicles turning right from Geary. The concrete center median (example can be seen in the map above) will be expanded to emphasize the right-turn-only requirement for northbound and southbound vehicles and to guide left-turns from Geary. The expanded median will have new ADA-compliant curb ramps, an Accessible Pedestrian Signal (APS; an audible yellow button), and will provide room for new traffic signal poles.

There are currently unsignalized crossings on Geary Boulevard at Cook Street and at nine intersections west of 30th Avenue, where there is less traffic and fewer travel lanes (31st, 35th, 37th, 38th, 39th, 41st, 44th, 45th, and 47th avenues). The Geary Rapid Project will install a new traffic signal at Cook Street in 2020, which makes the crossing at Commonwealth/Beaumont the last unsignalized crosswalk until 31st Avenue. (Note that both pedestrian and vehicle crossings are prohibited at Funston and 14th avenues.)

Nov
7
Safety improvements on Geary at Commonwealth/Beaumont Pop-Up We’re looking for feedback from neighbors about installing a new traffic signal on Geary Boulevard...