Thank you for your interest in the Sansome and Battery Connections Project! Over 50 people attended the project walking tour held on Thursday, February 21, 2019. Whether you attended the tour, have otherwise contacted the project team, or are simply reading along with this update, we appreciate the time and perspective you have brought to the project thus far!

Based on collective feedback received by the project team, the SFMTA is proposing the following changes to the project as originally introduced:

The target date to present the proposed near-term changes to the SFMTA Board of Directors (and obtain Port of San Francisco approvals) is Tuesday, April 16th at 1:00PM in Room 400, City Hall. In the meantime, the project team will continue stakeholder outreach and engagement throughout the month of March to further opportunities for feedback. If you are unable to attend the meeting, comments on the project can be sent to 1 South Van Ness Ave, 7th Floor, San Francisco, CA 94103, care of the SFMTA Board of Directors, or by emailing feedback prior to April 16 to sustainable.streets@sfmta.com or mark.dreger@sfmta.com with the subject 'SFMTA Board of Directors.' Submissions are public record and will be taken to the attention of the SFMTA Board.

To stay in the loop about the project and upcoming events, please sign up for project updates at SFMTA.com/SansomeBattery. 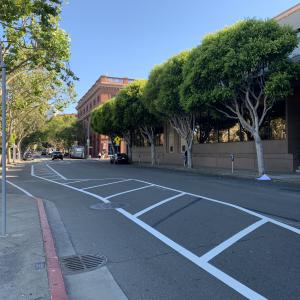