The beginning phases of the 22 Fillmore Transit Priority Project are hitting the street and will improve transit reliability and travel time as well as safety and accessibility for all users of the corridor.

This project is part of Muni Forward, an ongoing initiative to create a safe, reliable transit network and is a result of extensive community outreach and collaborative design with transit riders, merchants, residents, pedestrian and bicycle safety advocates, and other key stakeholders.

As a part of the City’s Vision Zero goal to end traffic deaths by 2024, 16th Street has been identified for safety enhancements because it is a High Injury Corridor -- the 12 percent of streets where over 70 percent severe/fatal injuries occur. The design for the 22 Fillmore Transit Priority Project will address the transportation needs of current and future residents, workers and visitors to the Mission, Potrero Hill, Dogpatch and Mission Bay. 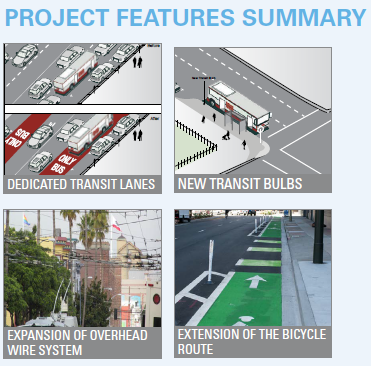 The project will provide transit and streetscape improvements for the southeastern portion of the 22 Fillmore route along 2.2 miles of 16th Street, including:

The project will also extend the 22 Fillmore route into Mission Bay. This requires extending the overhead contact system that powers our buses on 16th Street from Kansas Street to 3rd Street and will provide  zero-emission transit service into Mission Bay.

Where we are now

To set the stage for this work, new bike lanes were added to 17th Street in early 2017, creating a new route from Mission Bay and the Dogpatch to the Mission and Castro neighborhoods. This new bicycling route allows safer travel for all riding levels by reducing potential conflicts between bikes and buses and connecting to existing bike lanes that continue west on 17th Street into the Mission. For people who prefer to travel in dedicated bike lanes, 17th Street is a great option, though people riding bicycles may still share lanes on 16th Street. In addition, changes to traffic lanes were made on 16th Street between Bryant Street and South Van Ness Avenue to allow safer bus passage by slightly widening lanes and reducing the number of lanes from four to three.

To reduce congestion and improve safety, left turn restrictions will be added on eastbound 16th Street  at Alabama, Florida and Bryant streets. This measure will help keep traffic moving and make it so cars and buses do not get stuck behind turning vehicles.

Bike lanes on 17th Street will be extended from Kansas to Rhode Island Street to complete the connection to existing bike lanes west of Rhode Island Street. As an interim safety measure to improve pedestrian safety, a Rectangular Rapid Flashing Beacon (also called a  flashing crosswalk sign) will be added at 16th and Missouri streets to increase visibility for pedestrians crossing 16th Street until a new traffic signal is added during construction.

Starting in the fall, transit vehicles will benefit from additional street changes that will help  move them quicker along their route. To do this, bus stops will be removed westbound at Vermont Street (inbound) and eastbound at San Bruno Avenue (outbound).

Around that time, dedicated transit lanes will be added on 16th Street from 3rd Street to Potrero Avenue in both directions. These dedicated transit lanes will not be painted red until 2020 when the full project is constructed. Except for at intersections, where right turning vehicles are permitted to enter them, the new lanes will be reserved for buses and taxis at all times. . Additional left turn restrictions will also be added to keep vehicle traffic moving in the remaining travel lane. Left turn restrictions also improve safety for people walking by preventing “left hook” collisions, one of the top causes of collisions on high injury corridors.

Full construction of the project kicks off next spring and continues for approximately two years. To better leverage time and public money, project construction will coincide with replacing underground utilities and other aging infrastructure. Once completed, the16th Street corridor and the 22 Fillmore route will be safer and have better capacity to serve as one of the City’s most import connectors.

For full details on the project, see the 22 Fillmore Transit Priority Project webpage and sign up for future updates at this link