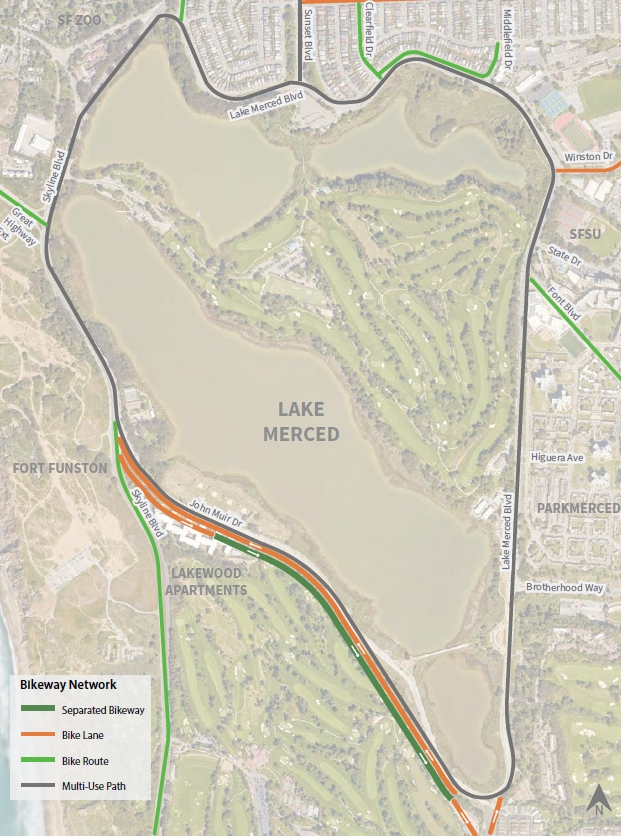 The existing bike facilities around Lake Merced are as follows:

The highest activity on the multi-use path in the vicinity of the lake is observed around the Winston Drive intersection, near the SFSU campus, and along John Muir Drive near the Lakewood Apartments. Additionally, Lake Merced Boulevard between Sunset Boulevard and Font Boulevard is part of San Francisco’s High Injury Network. Therefore, this section should be prioritized for both increasing capacity and enhancing safety for bicyclists and pedestrians.

SFMTA is overseeing two planning projects that explore potential areas of improvement for pedestrians and bicyclists on the roadways and paths that encircle the park. The Lake Merced Pedestrian Safety Project will identify safety improvements at pedestrian crossings along Lake Merced Boulevard between Skyline Boulevard and John Muir Drive. The Lake Merced Bikeway Feasibility Project, which is now complete, produced a study to determine the feasibility of installing bike facilities around Lake Merced Park.

At the request of District 7 Supervisor Norman Yee, the SFMTA conducted a planning study to assess the feasibility of installing a bikeway around Lake Merced Park. The completed study explored two bikeway options: 1) Extending or rerouting the existing multiuse pathway on property owned by San Francisco Public Utilities Commission (SFPUC) and managed by San Francisco Recreation and Park (RPD) to provide additional space for cyclists; 2) Installing a bike facility on Lake Merced Boulevard to connect with existing bikeway on John Muir Drive.

The Lake Merced Bikeway Feasibility Study was completed in January 2021. The final report presents near-term options for adding bikeways at road-level on streets adjacent to the lake and long-term options for widening the multi-use pathway around the lake.

If you would like to download a copy of the full Lake Merced Bikeway Feasibility Study, you may do so by visiting the links to the right.

Preparation of the report was made possible by the San Francisco County Transportation Authority through a grant of Proposition K Local Transportation Sales Tax funds under the Neighborhood Program for District 7. 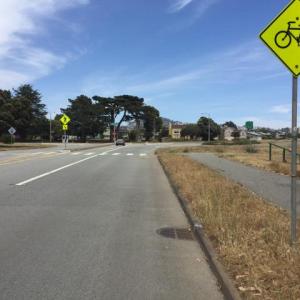 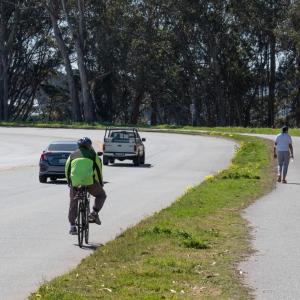