Lake Merced Boulevard between Skyline Boulevard and John Muir Drive is located in the southwestern corner of San Francisco and is surrounded by major recreational, education, and shopping destinations: Lake Merced Park, San Francisco State University, Lowell High School, Lakeshore Elementary School and Stonestown Galleria. Lake Merced Boulevard is one of three major roadways (i.e. John Muir Dr. and Skyline Blvd. are also major roadways) that provide access to the park, residential neighborhoods, and connections to local and regional public transit service (e.g. Muni 29 Sunset and SamTrans 122 lines). Lake Merced Boulevard is an official city bicycle route where cyclists can either use the bike path around Lake Merced or share the roadway with drivers on the north side of the street.

The Lake Merced Pedestrian Safety Project will study conditions for pedestrian safety and access along Lake Merced Boulevard between Skyline Boulevard and John Muir Drive.  The project will include public outreach including the formation of a steering committee to understand current walking patterns, barriers and opportunities to improve pedestrian connections to and from Lake Merced Park and nearby transit stops.  A traffic engineering analysis will review existing conditions, including collisions and traffic patterns, and an assessment of requirements to update the transit stops up to or beyond minimum standards.

The project will culminate in a Community-Based Transportation Plan (CBTP), and will include recommendations for improvements, preliminary conceptual designs, and an implementation plan.

The CBTP will reflect community needs and desires for the project that are feasible and implementable.

As part of the CBTP, a steering committee was created that is made up of 10 neighbors and stakeholders that include diverse interests and backgrounds including WalkSF, Merced Extension Triangle Neighborhood, Lakeshore Elementary, SFSU, Pomeroy Recreation and Rehabilitation Center, District 7 staff, residents, and regular commuters. The committee will weigh in on elements of the project including establishing baseline conditions, performing a community safety assessment, and developing a prioritize list of projects for Lake Merced Boulevard.

San Francisco Recreation and Parks Lake Merced 2012 Bond Project is currently implementing improvements (in two phases) to the northern portion of pathway include restoring asphalt, shoulder, and new curb ramps. Phase 1 - From Harding Rd. to Sunset Blvd. (along Skyline Dr. and the westernmost segment of Lake Merced Blvd.) and Phase 2 - The eastern half from Sunset Blvd. to Winston Dr. Construction is expected to break ground in early 2022.

Jun
8-22
Virtual Open House for the Lake Merced Pedestrian Safety Project From June 8 to June 22 , we are hosting a virtual open house as one way to provide information... 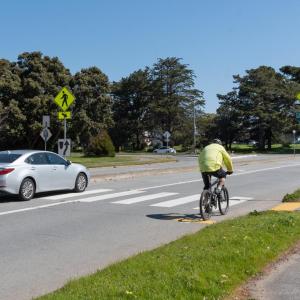