The Powell Streetscape Project will design and construct a new streetscape layout for Powell Street between Geary and Ellis streets to enhance the quality and use of the public realm, improve safety for all street users, improve cable car safety and performance, and renew transportation infrastructure. The project matches the footprint of the Powell Promenade Parklets (constructed in July 2011) and the Powell Street Safety and Sidewalk Improvement Pilot (implemented in Nov 2015). It will build and improve upon both successful projects with a permanent streetscape design, including wider sidewalks, reduced vehicle volumes, and improved loading for businesses and hotels. Intersection safety improvements at the crossings of Powell Street with Post, O’Farrell, and Geary streets and transit upgrades for the 38-Geary bus stop at Powell & O’Farrell, are also part of the project.

Powell Street is one of the most visited streets in San Francisco, owing to the world-famous cable cars running up and down the hill and its central location near the Powell BART/Muni station, Union Square, and Market Street. As such, Powell Street sees some of the highest pedestrian volumes measured in the city, with over 4,000 people per hour walking up and down the street during the peak period. However, the existing sidewalks are too narrow to support so many people comfortably. Although the temporary parklets provide additional space, they have reached the end of their useful lives.

The Powell Streetscape Project is a redesign of two blocks of Powell Street near Union Square, between Geary and Ellis streets – proposing a refreshed, pedestrian-focused streetscape design with wider sidewalks and improved loading. This new streetscape will provide a signature street for the iconic Union Square neighborhood, providing a welcoming environment for the area’s many visitors from around the world.

The project continues traffic regulations from the successful Powell Street Safety and Sidewalk Improvement Pilot. These piloted regulations include vehicle restrictions intended to reduce traffic volumes on Powell Street for improved cable car operations and a safer environment for walking. The project will address safety needs not covered by the pilot, such as upgrading painted sidewalk extensions at corners to become part of the permanent sidewalk. Additionally, the project will modify traffic signals at Powell & Geary to reduce conflicts between people walking in the western crosswalk and drivers turning right from Powell onto Geary; it will also upgrade signals at the intersections of Powell & O’Farrell and Powell & Ellis. The project also includes moving the Powell & O’Farrell bus stop serving the 38-Geary lines to the far side of the intersection, improving transit performance.

The Powell Streetscape Project results from over seven years of ‘tactical urbanism’, beginning with the installation of temporary aluminum parklets in May 2011, sponsored by Audi and designed by Hood Design Studio. These parklets were originally designed to last five years, and while remaining, have passed their useful life; this project will replace them with permanent sidewalk extensions ten years later.

In November 2015, the SFMTA initiated the Powell Street Safety and Sidewalk Improvement Pilot, which introduced vehicle restrictions on Powell Street between Geary and Ellis streets to reduce traffic volumes – addressing safety concerns and reliability issues for the cable car system. Specifically, the project restricted vehicle traffic from turning onto Powell Street for those two blocks to keep the roadway clear for cable cars and reduce the conflicts between turning vehicles and people in the crosswalks (it retained access for passenger and commercial loading for fronting businesses and hotels). In July 2017, these vehicle restrictions were permanently legislated by the SFMTA Board of Directors following encouraging results from the pilot. Traffic volumes decreased on Powell Street by roughly 60%, injury collisions within the project area dropped from 2-3 incidents per year to zero during the pilot, hazardous wear to the cable cars was reduced 23%, and turning movement volumes fell 70 to 80%. 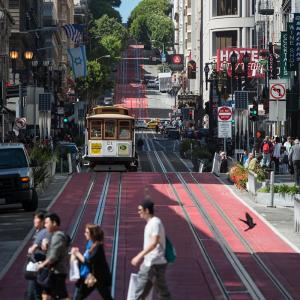