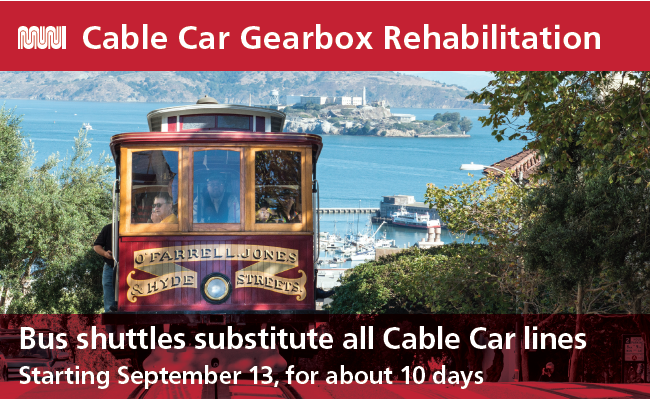 Muni will run bus shuttles for the Powell-Hyde, Powell-Mason and California cable car lines starting Friday, September 13 for about 10 days. As a part of the Cable Car Gearbox Rehab Project, the Hyde gearbox will be refurbished to keep the world-famous cable cars operating.

SF Public Works will also be making sidewalk improvements and trimming trees on the eastern sidewalk of Hyde between Beach and North Point.

Bus shuttles will not stop at cable car terminals, but bus stops will be conveniently located nearby:

Regular bus fare will apply: $3 for cash fare or $2.50 if paid by MuniMobile or Clipper Card.

To accommodate the bus shuttles, temporary parking removal will be in effect at the cable car terminals. To maximize the shutdown opportunity, maintenance work may also take place along the cable car lines at various locations during this time.

For those looking for an opportunity to take a ride on vintage vehicles during the bus substitution of the cable car lines, San Francisco’s unique historic streetcar line, the F Market & Wharves, will be in operation.

The cable propelling the Hyde Line is the master cable for all cable cars to go in and out of the Cable Car Barn. Cable cars are unable to enter into nor return from service when the Hyde cable is not functioning.

Since the project began in fall of 2017, the Cable Car Gearbox Rehab Project has successfully overhauled and refurbished the five gearboxes that propel the California and Mason cable cars, as well as a spare gearbox. 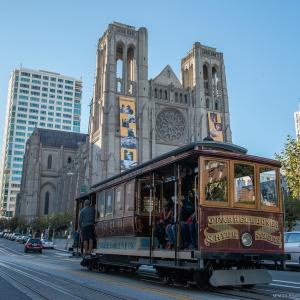