A series of transportation improvements on Beale Street will kick off this summer with a new transit lane from Market to Natoma streets. Transit lanes are part of the first phase of the Active Beale Street Project, and installation is scheduled to begin later this summer. The project was unanimously approved by the SFMTA Board of Directors on June 16, 2020 and received wide support from community members who participated in the meeting.

The project aims to promote active transportation in the East Cut neighborhood as it continues to grow. Other Quick-Build changes coming to Beale Street this summer also include a two-way protected bike lane between Market and Natoma, and a pickup/drop-off zone between Howard and Folsom. An extension of the two-way bike lane from Natoma to Howard streets and additional sidewalk widening on Beale Street would take place during construction phase one and two, which is expected to begin in late 2021.

As the City gradually reopens, the SFMTA is implementing improvements like this one for San Franciscans to reach their destination using different modes of transportation and  allow for more physical distancing.

A Faster Connection to the City’s Transit Hub

In a neighborhood composed of high-rise office buildings and affordable housing, transit lanes allow East Cut residents and those traveling downtown to complete their trips in less time on Muni and Golden Gate Transit, especially as we are seeing congestion return to city streets. The Beale Street transit lane keeps Muni a reliable option for people who depend on transit so that employees can get to work, and customers can access shops and services. Commuters connecting to other regional transit lines at the Salesforce Transit Center would also see improvements in travel times and frequency. Beale Street is used by six Muni lines, including the 5 Fulton, 5R Fulton Rapid, 7 Haight-Noriega (shortened), 38 Geary, 38R Geary Rapid, 30X Marina Express (suspended), 41 Union (suspended), and Golden Gate Transit.

Transit lanes benefit Muni customers by reducing crowding and helping maintain physical distance onboard. As San Francisco’s economy continues to recover, it has become critical during COVID-19 to protect the health of Muni passengers by enacting physical requirements that have reduced passenger capacity across our transit system. With transit lanes, Muni will be able to complete routes in less time and return into service more quickly. This enables us to provide more service with the same number buses to reduce crowding and pass-ups.

Customers also reduce their possible exposure to COVID-19 when their travel time is shortened. The SFMTA is developing a plan to install temporary emergency transit lanes as a temporary measure. These proposed lanes benefit customers on Muni routes that are critical to neighborhoods with high percentages of people of color and low-income households.

Installing a transit lane on Beale Street this summer as a Quick-Build before the larger construction will improve travel times, frequency, and reduce possible exposure to COVID-19 for Muni passengers. Be on the lookout for other future improvements on Beale Street that will provide better protection for people who walk and bike to encourage other modes of transportation and help maintain physical distancing.

16
Jun
Board of Directors meeting, June 16, 2020 Due to the COVID-19 health emergency and to protect our Board members, SFMTA staff, and members of... 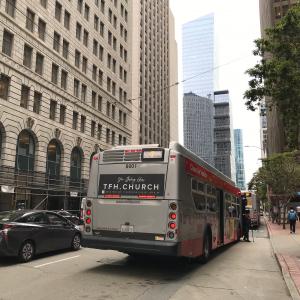