Bay Area Bike-Share to Boom With Sponsorship by Ford

Share this: FacebookTwitterEmail
By
Aaron Bialick (no longer with the SFMTA)
Friday, September 9, 2016 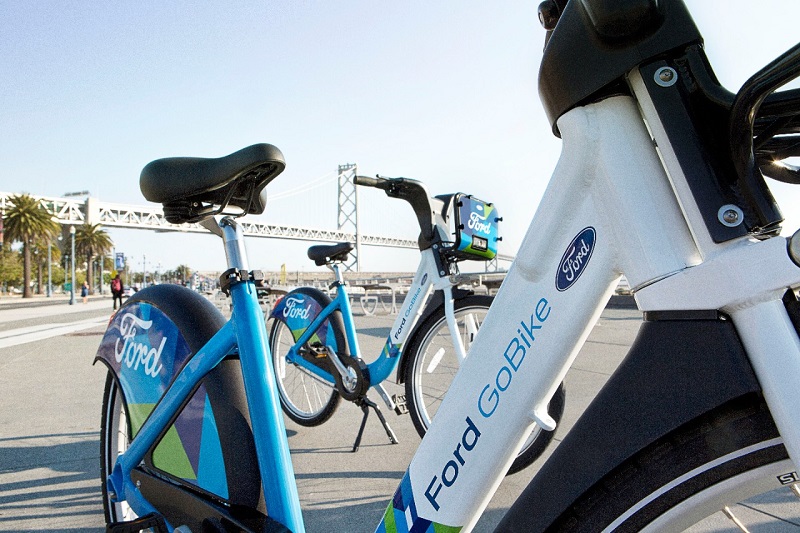 The new look of bike-share in the Bay Area. Photo: Ford

The ten-fold expansion of Bay Area Bike Share will be fully funded by sponsor Ford Motor Company, and the system will be re-named Ford GoBike.

Now, the expansion of the Bay Area’s bike-share system to one of the largest in the nation will come without any cost to taxpayers.

“When the bike-sharing program first launched three years ago, we saw a transformation in the way residents and visitors alike moved around the city,” said Mayor Lee. “Expanding this popular program will help more people travel through more neighborhoods more easily and to access much more of the Bay Area.”

In San Francisco, the existing Bay Area Bike Share system – launched as a pilot project in 2013 – is limited to downtown. With a full-scale expansion through Ford GoBike, more communities will be able to use the system to get to work, school and other destinations.

Starting in the spring, the first wave of new stations in SF will come to an area covering the Mission, the Castro and Noe Valley. The following phases will expand the system to outer neighborhoods across the city like the Richmond and Bayview districts. 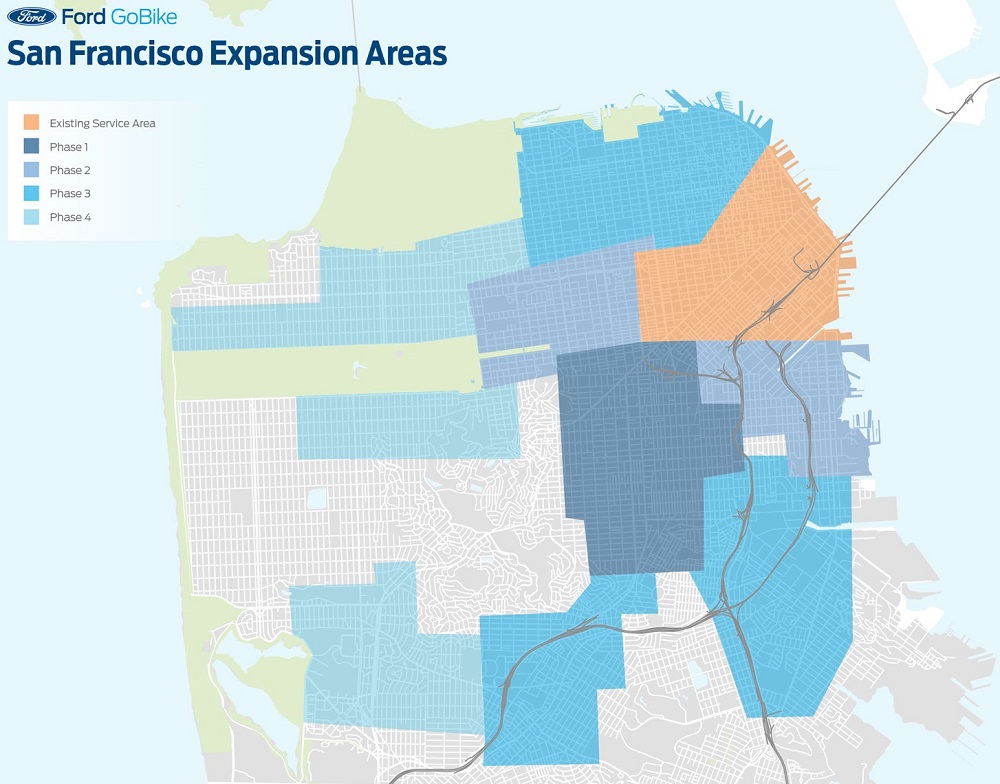 In San Francisco, areas with bike-share stations will grow from the existing downtown core to outer neighborhoods. Image via Bay Area Bike Share

The locations for new stations are being planned in collaboration with the communities they will serve and with a focus on equity. Early this year, the SFMTA partnered with the MTC, Motivate and members of the Board of Supervisors to host workshops for the public to help plan SF’s initial station expansions. Ford GoBike will also introduce bike-share in the East Bay and expand the existing system in San Jose, Palo Alto and Mountain View.

With bike-share booming in cities around the world, private sponsorships have provided a way for many of the systems to grow more quickly and with greater financial stability. That includes New York City’s CitiBike (sponsored by CitiBank), the nation’s largest bike-share system, which is also operated by Motivate, the largest bike-share operator in the world.

“A transportation revolution is coming to the Bay Area,” said Jay Walder, Motivate’s chief executive officer. “This unique partnership with Ford shows that bike share is no longer alternative transportation; it is central to creating smart, on-demand mobility that represents our values for equity and sustainability. Thanks to the partnership of Metropolitan Transportation Commission, San Francisco, San Jose, Oakland, Berkeley and Emeryville, bike share will soon be available for all in the Bay Area.”

Bicycling in San Francisco continues to be San Francisco’s fastest growing mode of transportation, as we found in our 2015 Bicycle Count Report. That boom is spurred as we grow networks of bike-share and bike-friendly streets to make bicycling a more convenient and visible option to get around.

“This bike-share expansion is the culmination of years of hard work by the SFMTA with our regional partners,” said SFMTA Director of Transportation Ed Reiskin. “It goes hand-in-hand with our efforts to improve conditions for cycling citywide and makes San Francisco’s streets safer and more comfortable for people of all ages and abilities to get around by bike.”