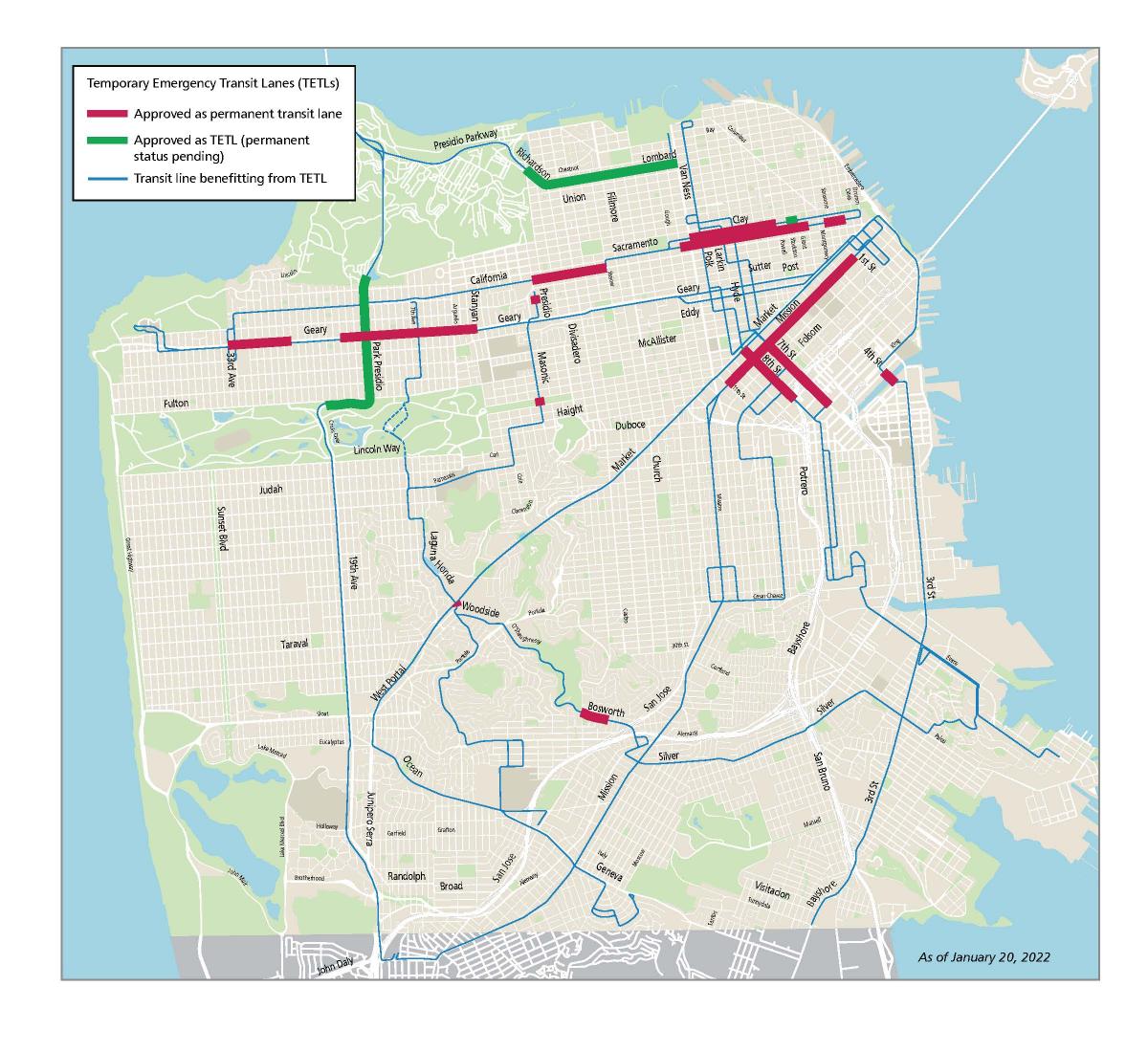 Map of nearly 10 miles of permanently approved and 13 miles of installed transit lanes as part of the Temporary Emergency Transit Lanes program.

The SFMTA Board of Directors voted to make most of the remaining Temporary Emergency Transit Lane (TETL) projects permanent at its January 18 meeting. This move is part of the SFMTA’s efforts to continue the successful temporary improvements in response to the pandemic to preserve those benefits longer term.

During the early months of the pandemic, with traffic at an all-time low, Muni routes saw a 15% reduction in travel time on average. This allowed us to provide more frequent and less crowded service at a time when resources were very limited. We launched the Temporary Emergency Transit Lane program to preserve this time savings even as traffic returned, so people making essential trips on Muni wouldn’t get stuck on slow and crowded buses.

The Temporary Emergency Transit Lane program used a quick-build approach to install nearly 13 miles of emergency-response transit lanes in about 18 months. This was the fastest expansion of transit lanes in the city’s history, benefiting routes that carry two-thirds of current Muni customers. Moreover, all these projects benefit lines that serve neighborhoods identified by the Muni Service Equity Strategy. The program has shown great results, and several corridors were made permanent in 2021.

The most recent round of temporary transit lanes that were permanently approved on January 18 benefit Muni’s 1 California, 19 Polk, 27 Bryant, 43 Masonic and 44 O’Shaughnessy, bringing the total to 10 miles that have been made permanent.

The 1 California’s transit lane was installed in summer 2021, benefitting one of Muni’s highest-ridership lines. The project evaluation showed up to 15% faster travel time for 1 California customers compared to pre-pandemic. Following evaluation and community input, we made some adjustments to the project, adding transit lanes to two additional blocks and removing afternoon towaway restrictions on one block of transit lanes in Chinatown. Although it was not part of the original project, three blocks of general traffic peak-hour towaway lanes will also be removed on Sacramento Street to help address merchant concerns about parking availability.

Between summer 2020 and fall 2021, transit lanes were installed on 7th and 8th streets in SoMa, critical corridors for the 19 Polk, a key north-south connector in San Francisco. The 27 Bryant’s route was modified last year so that it would also be able to use the lanes to travel through SoMa with less delay. The project evaluation found that the lanes helped preserve transit travel time savings as traffic returned. Transit travel time along 7th and 8th Streets decreased by up to 13% when the lanes were installed and remain up to 25% shorter than pre-COVID conditions, even as traffic volumes increase.

In April 2021, we installed temporary emergency transit improvements at six key locations where traffic bottlenecks occur on the 43 Masonic and 44 O’Shaughnessy. These spot improvements, which included transit lanes and left turn restrictions, helped buses navigate through these bottlenecks more quickly, providing a faster ride and better reliability for Muni customers. In addition to the transit improvements already made on Masonic, transit signal priority is being explored as an additional tool to further improve travel times.

The remaining project under the Temporary Emergency Transit Lane program is the Park Presidio Lombard Temporary HOV Lanes project which will finish implementation on the Park Presidio segment soon. Once implementation is complete, we’ll conduct a thorough evaluation in partnership with Caltrans, since this is on a state highway, before making a recommendation about whether to make these lanes permanent as well.