Beyond Safe-Hit Posts: Tackling the Challenges of Engineering Safer Streets

In an ideal world, making effective and lasting safety improvements on our streets would be as simple as planting plastic “safe-hit” posts along every bike lane and painted safety zone. But the transformation of our streets into friendlier places for walking and biking requires a heavier lift and more careful design consideration than may be apparent.

We’re on the cusp of a new generation of bikeways in San Francisco. As construction of crucial, major street transformations get underway, our planners and engineers work every day to develop plans for more.

In the meantime, we look for opportunities to install near-term, low-cost measures like safe-hit posts, which can help more comfortably separate bike lanes from motor traffic and cause drivers to slow down as they turn corners.

Recently, an advocacy group placed its own cones and safe-hit posts at various locations around the city. In those cases, we generally have no choice but to remove them to comply with transportation laws and avoid hazards for various types of traffic. 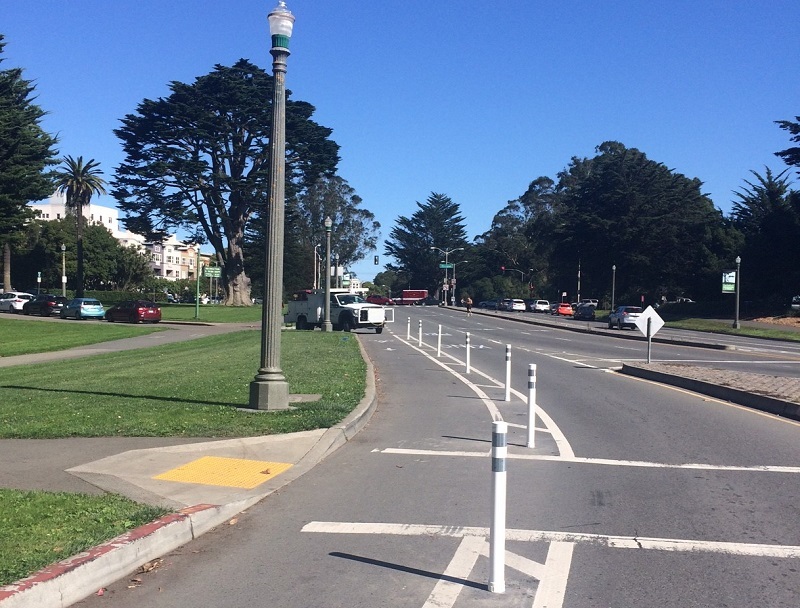 This week, we installed new safe-hit posts along the bike lane on John F. Kennedy Drive in Golden Gate Park to replace the unofficial ones installed by a safety advocacy group.

There was an exception on a section of the John F. Kennedy Drive bike lane, at the east entrance to Golden Gate Park, where we were able to leave the unofficial posts in place until we replaced them this week.

That exception was a result of rare coincidence. We’d already planned to install posts in this spot, in the buffer area of the bike lane, to better deter drivers from veering into the bike lane as they turn. Previously, we hadn’t installed them because the bike lane wasn’t wide enough for street sweepers to go through without destroying them.

As it happened, the posts were installed just as SF Public Works plans to switch to smaller street sweepers, which will allow us to install posts at locations like these. We’re now reviewing those opportunities to expand our ongoing installation of posts along bike lane sections across the city.

How We Choose to Place Safe-Hit Posts

When we choose where to install fixtures like safe-hit posts, access for street sweepers is just one factor we consider. For example, on JFK Drive, we made sure the new posts we installed can be detached from their base to help facilitate events like marathons.

In general, we aim to ensure the engineering improvements we invest in will achieve context-specific goals that make streets safer and more livable - and that they’ll last. That means safe-hit posts must cause the intended effect on traffic behavior, and that they won’t be routinely knocked down  - possibly causing hazards - and need to be replaced.

The Rules of Street Design - and How We’re Changing Them

It’s also easy to forget that the street changes cities implement must generally be approved in state and federal engineering design guidelines to fall under a legal protection known as “design immunity.” The risk of installing non-approved street designs, whether or not they’re deemed safe informally, is that the city may be to opened up to lawsuits - the cost of which fall on to taxpayers.

The good news is that those design guidelines have evolved to empower cities to install more measures like protected bike lanes in recent years.

The SFMTA played a major role in the creation of new state [PDF] and federal guidelines, which are paving the way for protected bike lanes across the U.S. Those guidelines are based largely on projects we pioneered – from the parking-protected bike lanes on JFK Drive, to green, post-separated bike lanes, to bicycle traffic signals and left-turn bicycle junctions.

That type of work may not represent the type of physical improvements on the street we all want to see more of. But as we move beyond posts and paint, and adapt lessons from other cities and countries to design truly protected bike lanes, it’s crucial to get the details right.

There is a visible sign of our continued effort to experiment on eastbound Market, from Gough to 12th Street, where we tested out four different curb designs for raised bike lanes this year. With the monitoring period finished, we plan to install safe-hit posts along the entire raised bike lane next week. 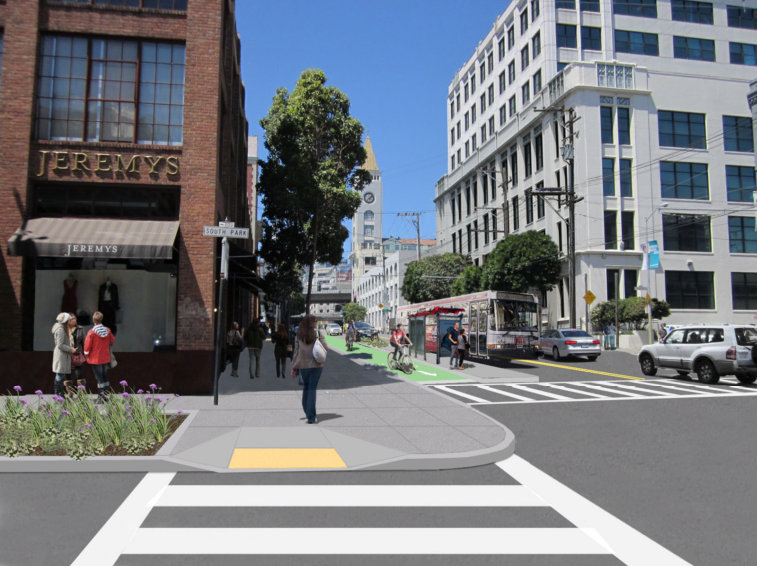 2nd Street is just one street where construction on a major overhaul with protected bike lanes gets will into full swing next year.

On the Way: Protected Bike Lanes and More

Here’s a snapshot of other major safety improvements on the way in the coming months:

With the resources available, we’re working every day to transform San Francisco’s streets for the better. While a number of major street overhauls will ramp up in 2017, for many safe streets advocates, they’ve been a long time coming. With the crucial role advocates play in elevating the conversation, building community support and pushing us to do more for safer streets, building understanding to work together is key to moving ahead with real transformations.