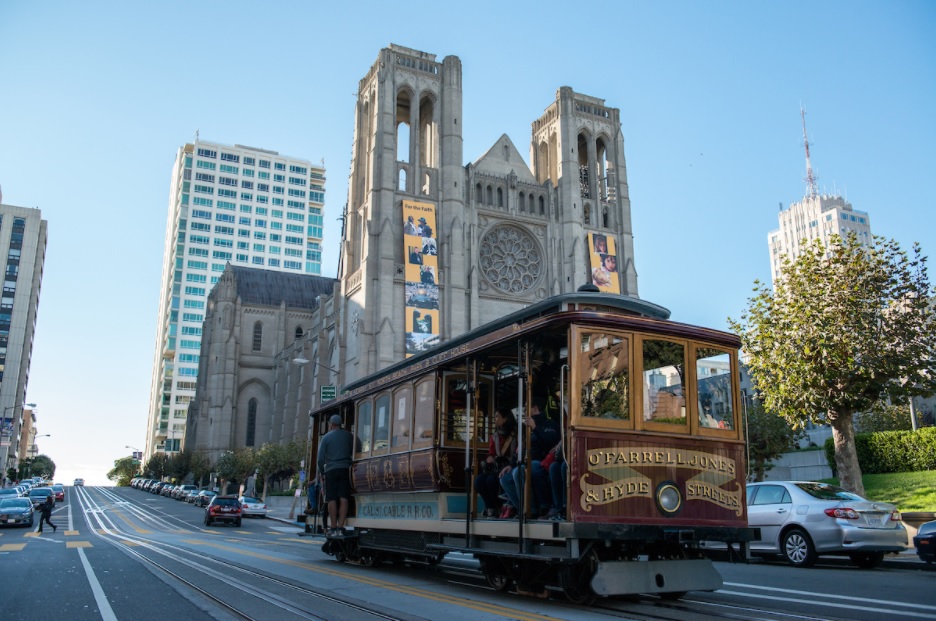 All aboard? Ding! Ding! A familiar sound is in the air again. It's time to experience San Francisco once more with a ride on one of the city's landmark cable cars. When was the last time you were on board? Shop, dine, and visit your favorite destinations along the cable car line and support the reopening of San Francisco's economy.

On September 4, 2021, San Francisco’s historic cable cars will return to revenue service after an unprecedented shut down of more than a year as part of the city's emergency response to protect operators and the public during the Covid-19 pandemic. Coincidentally, this reopening marks the 148th year of cable car operations in San Francisco.

Rebooting the cable car system required significant work. As the cars had been out of service since March 17, 2020 we had to recertify and hire new line inspectors and prepare the cable cars’ historic infrastructure to accommodate service. Cable car testing began with the Powell-Hyde line in July. In August, the SFMTA announced that free test rides would be offered to the public on all three lines as we worked out possible kinks in the system, leading to this month's return of the landmark cable cars.

History of the Cable Car

Andrew S. Hallidie, an engineer originally from Scotland, conceived his idea for a steam engine-powered, cable-driven rail system in 1869 after witnessing horses being whipped as they struggled to pull a passenger car up the wet cobblestones of Jackson Street.

Hallidie then entered into a partnership to form the Clay Street Hill Railroad, which began constructing a cable line on Clay Street—creating the first cable car line in the world, which launched in May 1873.

The existence of San Francisco's cable cars has been threatened over and over again throughout the years. They have persisted through two World Wars and The 1906 Great Earthquake, and have outlasted political attempts to remove them from city streets in the late 1940s and 1950s, eventually becoming the international symbol of San Francisco that they are today.

In 1946, the cable cars almost saw their extinction when some city leaders, including then-Mayor Roger Lapham, wanted to tear out the 1870s-era transit system. The wooden vehicles towed by an underground cable system were seen more as a costly nuisance than a joyous marvel. In the same year, however, Friedel Klussman founded the Citizens Committee to Save the Cable Cars. The committee began a public campaign proclaiming that the cable cars’ value to San Francisco was far greater than their operational costs. They succeeded in placing an amendment on the ballot. With newspaper coverage, public support quickly grew. Celebrities voiced their support for cable cars as well.  The measure passed in a landslide victory, and the city of San Francisco had rallied to save the Powell Street cable car system.

Despite a shut-down in the 1980s for system reconstruction and the more recent pandemic-related service suspension, cable cars have proven to be an enduring legacy of San Francisco. We appreciate the patience of our riding public as we work to bring this service back better than ever.