The San Francisco Municipal Transportation Agency (SFMTA) is exploring an extension of the Central Subway beyond its current Chinatown Station terminal at Washington and Stockton streets. Possible destinations include North Beach, Fisherman’s Wharf, the Marina, Cow Hollow and Presidio. 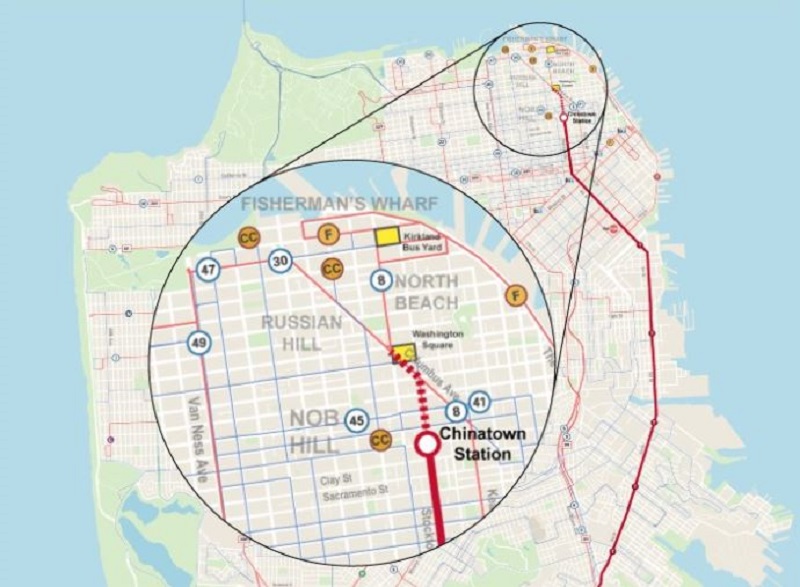 Although the Chinatown Station is the northern terminus of the Central Subway Project, subway tunnels were constructed north of the station terminating at Columbus Avenue and Union Street.  During construction of the Central Subway, these tunnels were created so that the tunnel boring machines could be removed from the ground in an area where off-street space was available. These tunnels can also be used to further extend rail service in the future.

In 2015, the SFMTA published a study, T Third (Phase 3) Concept Study, to understand whether extending the Central Subway was even feasible. The Concept Study’s main objective was to identify benefits and tradeoffs from sample subway extension routes along Powell Street, Beach Street and Columbus Avenue with input from community members and public agency partners. The study evaluated alternatives using criteria such as passenger experience, operational efficiency, system performance and construction effects. Ultimately, the study showed that a subway extension would be technically feasible but did not identify a route preference.

The Central Subway Alternatives Study builds upon the Concept Study by identifying community driven transportation goals, understanding whether there is a desire for a subway extension and seeking input on preferred routes and station locations.

The Alternatives Study will evaluate the technical feasibility of a variety of alternatives: combinations of routes and station locations. The end result will be two or three promising alternatives recommended for further study and environmental review.

So far, we’ve held two open houses in North Beach and the Marina neighborhoods and met with several neighborhood groups to better understand the community’s transportation goals. Share your input and draw your station location ideas on the map using our survey tool.

You can request a hard copy version of the survey by contacting Adrienne Heim, Public Information Officer, at 415.646.2564, or Adrienne.Heim@sfmta.com.