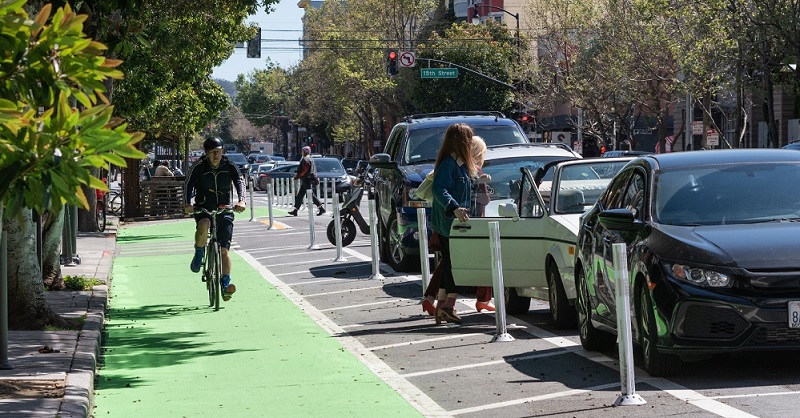 The SFMTA is announcing the next steps in the  Valencia Street Bikeway Improvements Project. Following a successful pilot of parking-protected bike lanes between Market Street and 15th Street in spring 2019, we are immediately advancing design work between 19th Street and Cesar Chavez, with the expected implementation of protected lanes in spring 2020.

In January 2018, the SFMTA began a planning process to better understand the safety concerns for people traveling on the Valencia corridor. We heard through community outreach that people did not feel safe with the existing bike infrastructure due to the constant loading and unloading of people and goods in the bike lane. In addition, our analysis of traffic collision data showed that about 48 percent of cyclist injuries resulted from dooring, double-parking and vehicle parking maneuvers on the corridor, suggesting the critical need for design changes. Under Mayor London Breed’s leadership in the fall of 2018, the SFMTA implemented a pilot protected bikeway project from Market Street to 15th Street in early 2019. Following the implementation of the pilot, we heard increased interest in more protected bikeways and pedestrian safety improvements along other portions of Valencia Street.

Why now? Why here?
Given the current state of existing infrastructure on Valencia Street from 19th Street to Cesar Chavez, we are working to more quickly implement safety improvements. This section of Valencia Street has a similar cross-section to that of the pilot project, which will help streamline the design process. Moreover, during a five-year period, 86 people were injured in traffic collisions between 19th Street and Cesar Chavez.

These improvements will support the San Francisco’s Vision Zero policy of eliminating fatal traffic injuries on our city streets and will also work towards Mayor Breed’s goal of 20 miles of protected bike lanes in the next two years.

Continued Evaluation and Next Steps
The project team will keep the community up to date on the status of the project by sharing draft designs and the associated tradeoffs throughout the design process.  Please sign up for e-mail updates to stay in the loop. We expect to complete design in late 2019, with implementation beginning as soon as possible following project approval.

In addition, as part of our Safe Streets Evaluation Program, data is currently being collected to evaluate the pilot (Valencia Street from Market Street to 15th Street) and the project team will utilize the results of the evaluation to help inform the design for protected bikeways on Valencia Street from 19th to Cesar Chavez streets. The results from the pilot project will be published on the project webpage in summer 2019, detailing some of the initial findings.

Finally, in June 2019, signal improvements will be made at the intersection of Valencia Street and Duboce Street to provide signal separation between bikes and right turning vehicles. This change, in conjunction with the pilot project, will be further evaluated in fall 2019.