Valencia Street is a vibrant commercial corridor with a diverse set of restaurants, shops, bars and services. Valencia also serves as a major north-south bike route for those who live, work, visit and travel through the neighborhood. As the street has become more popular, the city has heard increasing community concern about traffic safety and congestion. Ride-hailing services and commercial vehicles are frequently double-parking in the bike lane, posing safety concerns for all who travel on Valencia Street.

The SFMTA will work with the community to assess and recommend safety improvements for Valencia Street between Market and Mission streets. The Valencia Bikeway Improvements project will identify opportunities to upgrade the existing bike lanes given the high volume of cyclists on Valencia Street, history of bicycle-motor vehicle crashes, and evidence suggesting that illegal parking and loading within the bike lane is prevalent. The public engagement process will include outreach to local businesses, public meetings, workshops and other forums for community input.

The planning process will result in:

Under Mayor London Breed's leadership, the SFMTA Board of Directors approved a project to pilot and evaluate a parking-protected bikeway from Valencia Street from Market to 15th streets. Additional project elements include better intersection visibility, school loading islands and parking and loading changes. This pilot will help inform the additional near and long-term bikeway options for the Valencia corridor, as part of the Valencia Bikeway Improvements project. In achieving the project goal to provide protected bikeways for the entire length of Valencia Street, the project team will work to design protected bikeways in on Valencia Street from 19th Street to Cesar Chavez in 2019, with the goal to implement these improvements in spring 2020.

The section of Valencia Street from 15th to 19th streets is expected to have protected bikeways by 2021, as part of Mayor Breed’s commitment to add 20 miles of protected bike lanes by 2021.

The SFMTA understands the need for safer streets sooner. That's why incremental changes will be implemented along the corridor that will include:

Every year, around 30 people are killed and hundreds are severely injured while traveling our on city streets. These deaths and injuries are unacceptable and preventable, and San Francisco is committed to eliminating them. The City and County of San Francisco adopted the Vision Zero policy in 2014  - a commitment to building better streets, educating the people on traffic safety, enforcing traffic laws and prioritizing resources to implement effective initiatives that save lives. The goal of Vision Zero is to eliminate all traffic deaths and reduce severe traffic-related injuries in San Francisco by 2024.

Most of Valencia Street is part of the city's High-Injury Network, the 13 percent of streets that account for 75 percent of severe and fatal traffic collisions. Between 2012 to 2016, there were 204 people injured and 268 reported collisions on the corridor, of which one was fatal. Collisions involving vehicles and bikes were most common, accounting for 40 percent of all reported incidences on Valencia. These improvements will support the San Francisco’s Vision Zero policy of reducing and eliminating severe and fatal traffic injuries on our city streets and will also work towards Mayor Breed’s goal of 20 miles of protected bike lanes in the next two years.

The project team will be working with the community in developing near-and-long recommendations to improve safety on Valencia. The community engagement process will include outreach to local businesses, public meetings, workshops and other forums for community input.

Since March 2018, the project team spoken with close to 30 community organizations and reached out to over 200 local merchants on the corridor about the project. In parallel, the team has also had conversations about traffic safety with community members at neighborhood events and forums.

In July 2018, the SFMTA hosted a series of workshops to better understand the community’s opinions around tradeoffs associated with the bikeway design alternatives and near-term curb management improvements. Over 200 community members attended and over 360 surveys were collected at the workshops or taken online.

We encourage community members to sign up for project updates to stay in the loop and to hear about our upcoming project events.

Jun
16
Board of Directors meeting, June 16, 2020 Due to the COVID-19 health emergency and to protect our Board members, SFMTA staff, and members of...
Feb
24
Valencia Bikeway Improvements (19th Street to Cesar Chavez) Open House and Public Hearing Following a successful pilot implementation of parking-protected bike lanes between Market Street...
Dec
4
Board of Directors meeting, December 4, 2018
END_OF_DOCUMENT_TOKEN_TO_BE_REPLACED 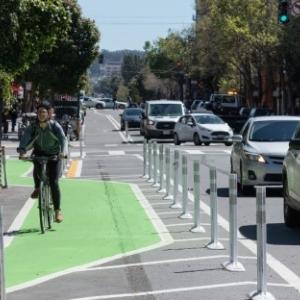 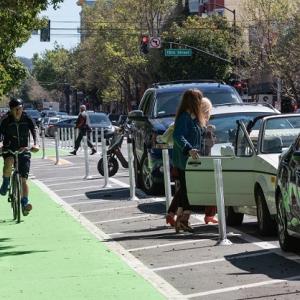 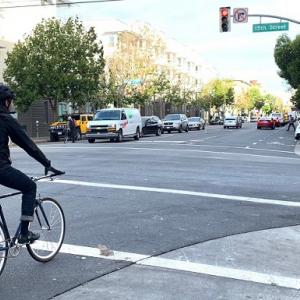 Up for Approval: Pilot Protected Bikeways on Valencia Street 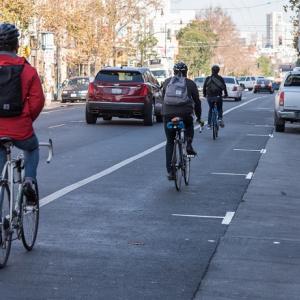 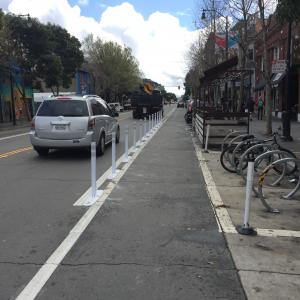