Muni's electric trolley buses have served San Francisco for 75 years, which we will celebrate during this year’s Muni Heritage Weekend (September 24 - 25) with a special historic photo exhibit inside the vintage buses out for the festival. Here’s a look at how these hard-working "green machines" came to service some of Muni's busiest routes. 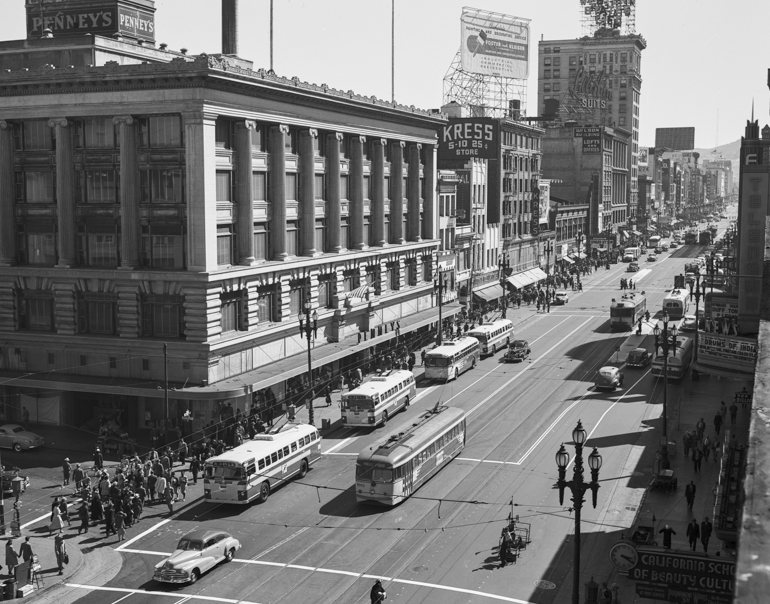 This view west on Market Street from Eddy Street on July 7, 1949 shows a line of electric trolley buses rolling down Market on the 5, 7, 8 and 21 routes.

San Francisco's first trolley bus route, operated by private transit company Market Street Railway Co., opened in 1935. But it wasn't until the late 1940s that these buses really gained traction on the streets of San Francisco.

In the post-World War II era, many Americans saw cars and highways as the best way to get around and public transit – served mostly by streetcar lines suffering from poor maintenance during the war – as slow, crowded, and outdated. Muni was no exception to this view, and as ridership declined and operating costs surpassed revenues, the city's transit provider looked to the electric trolley bus to help save the system.

But why choose trolley buses, when fuel was cheap and bus manufacturers were chomping at the bit to replace streetcars with their vehicles?  For San Francisco, it came down to operational costs and geography. 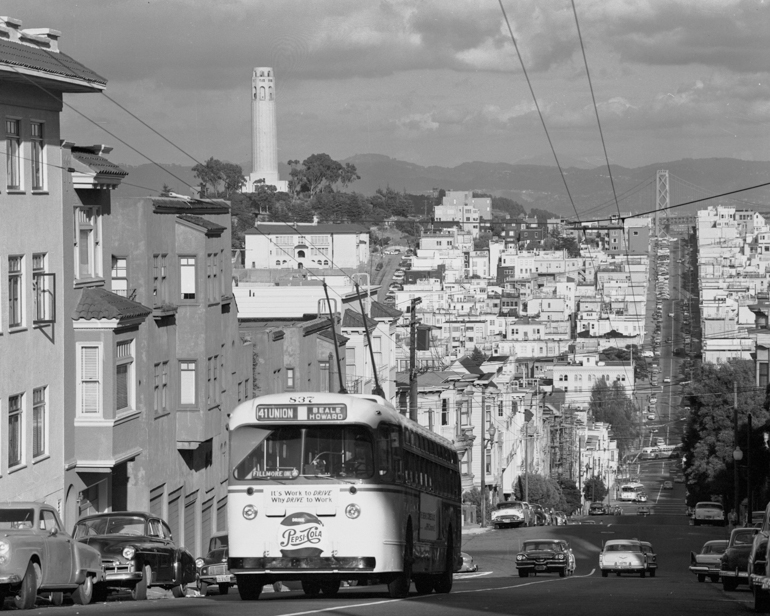 Both trolley and motor buses were favored over the streetcars of the time because they didn’t require rails or two people to run them, which meant a lower base operational cost.

However, when compared to motor buses, trolley buses were an even better bargain. With no oil changes, tune-ups, fuel costs or an engine or transmission to wear out, they lasted much longer and cost less over their lifetime. An added bonus in hilly San Francisco was their excellent hill climbing ability, giving them an advantage over both streetcars and motor buses.

Today, Muni operates one of the largest fleets of electric trolley buses in the nation. These quiet, zero-emission buses continue to serve some of our busiest and steepest routes in the city, from the 14 Mission to the 33 Ashbury, the modern descendent of SF's first trolley bus line.

Be sure to join us on September 24-25th to see and ride some of Muni's vintage trolley buses. Find more great photos on the SFMTA Photo Archive website follow us on Twitter and Instagram.