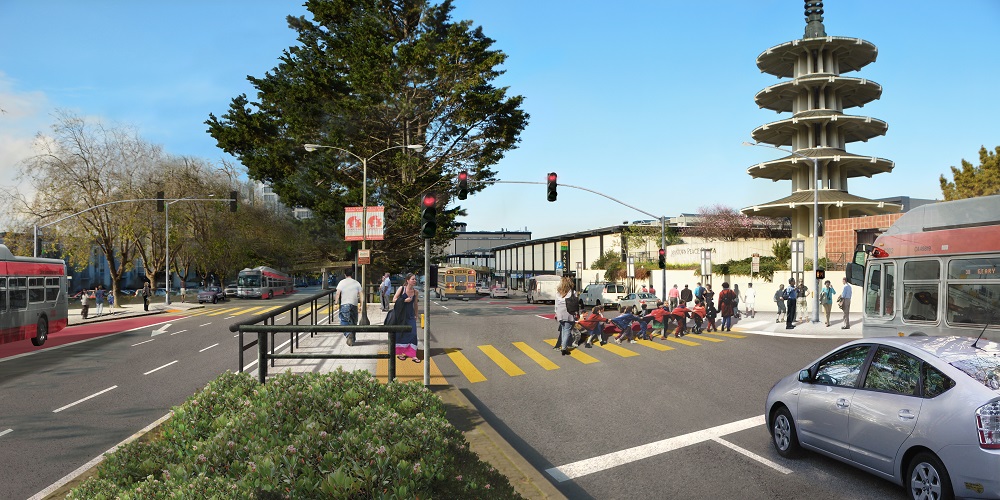 A visualization of Geary Boulevard at Buchanan Street with Geary Rapid improvements.

We’re gearing up to start the first set of Geary transit upgrades later this year.

In the coming months, we will launch further outreach for the Geary Rapid Project, which focuses on early improvements on the stretch of the 38 Geary route between Market Street and Stanyan streets. In the meantime, we will finalize the design and construction of longer-term improvements for the Geary Boulevard Improvement Project.

With the Final Environmental Impact Report (EIR) approved unanimously by the San Francisco County Transportation Authority (SFCTA) Board in January, lead management of the project is transitioning from the SFCTA to the SFMTA, which will design and implement Geary improvements as two separate projects.

The Geary Rapid and Geary Boulevard Improvement projects will each comprise different sections of the 38 Geary route.

The Geary Rapid Project will install upgrades along Muni’s 38 Geary route, between Market and Stanyan streets. Implementation is planned to start later this year and continue until 2020. Upgrades include extending the transit-only lanes to Stanyan and upgrading traffic signals to improve traffic flow and signal priority for bus service. Nearly every intersection will also get pedestrian safety features, including sidewalk extensions and crossing countdown signals.

The Geary Boulevard Improvement Project will include more construction-intensive improvements on Geary west of Stanyan to 34th Avenue. Geary, between Palm and 26th avenues, will be reconfigured for center-running transit-only lanes, with new amenities like transit boarding islands.

Public input helped shape the plans for Geary improvements throughout the environmental review process, and soon we’ll go back out to the community for more to inform the Geary Rapid project.  Expect to see the Geary Rapid project team out on the street later this month collecting feedback on the detailed changes planned for curbside parking and loading.

The Rapid project team will also host open houses in April and May, featuring the latest designs, data and visualizations. Join us to get updates on the next steps and share feedback with SFMTA staff. Stay tuned for other upcoming opportunities to learn more and provide input including open hours at local cafés along Geary and table setups at community events like farmers markets.

To get the latest information and contact the project team, visit sfmta.com/GearyRapid and sign up for updates.