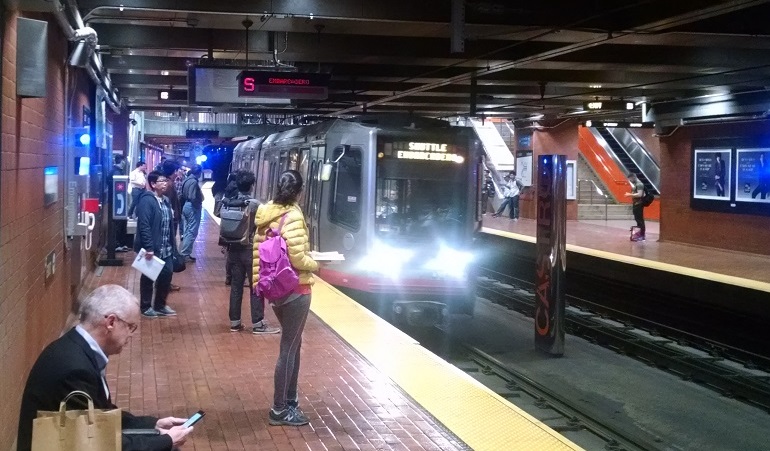 Muni customers wait to board an S Shuttle train at Castro Station. Muni's subway carries more than 100,000 trips per day.

On Monday morning last week, a group of commuters at Castro Station cheered when a Muni train arrived with plenty of room to board.

That was the day we re-launched regular S Shuttle service in the subway to provide relief from overcrowding during the morning rush hour. If you’re a regular morning commuter on Muni's subway, we want to hear what you think.

During the average morning commute, trains headed downtown are often quite full when they arrive at the subway stations. To provide some more room, we added two one-car shuttle trains that make multiple trips in the subway between Embarcadero and Castro station. Over the past week, the shuttles were carrying approximately 100 customers per trip.

Even with the extra trains, the Castro Station inbound platform can still be crowded at times. On that initial Monday morning, after each train was skillfully switched from outbound to inbound using the crossover tracks nearby, most of the intending customers were able to board. When the regular L, M or K trains pulled in, the rest of the riders could more easily find a spot on board.

With more space to go around, customers on all Muni Metro lines get a roomier ride in the subway. Adding “short trip” trains like these is a strategic way to use limited resources to provide a service boost where it’s needed most – and maybe make your morning a little more pleasant.

This new service is a re-launch of the Castro Shuttle that ran some years ago. Unfortunately, due to vehicle maintenance challenges and limited resources, we had to pause that original shuttle service to focus available trains on providing full-line Metro service.

Through Muni Forward, over the past couple of years we’ve added service on Metro lines on both weekdays and weekends, introduced double stopping in Metro stations and made improvements on the streets like smarter traffic signals and red transit-only lanes. Another major boost for Metro service will come when the first of our new Muni trains roll into service next year.

Have you noticed a difference with the new subway shuttles? Let us know what you think!