The Rules for When You Can Enter a Transit-Only Lane 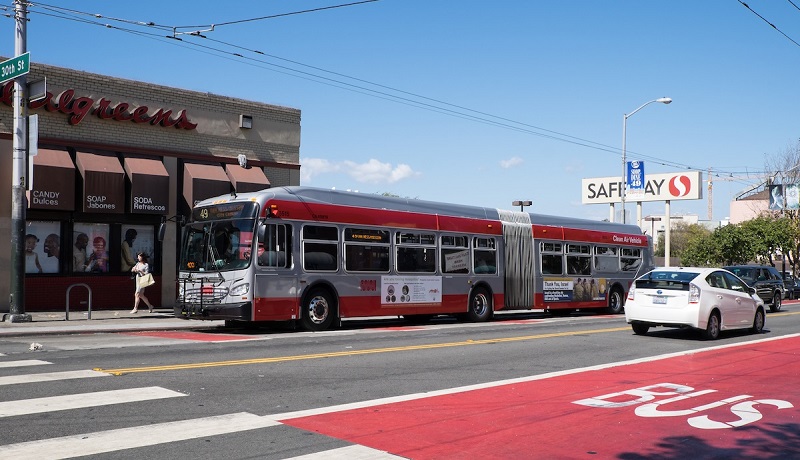 San Francisco's transit-only lanes are generally only for Muni, taxis and emergency vehicles, but there are a few scenarios when people driving and bicycling are allowed to enter them. We thought we'd help clarify the rules.

Transit lanes were introduced in SF more than 40 years ago to allow Muni riders to bypass traffic congestion on streets where they're needed. In the last few years, we've added red paint to make transit lanes more visible, which causes fewer drivers to violate them, thereby making your Muni trip more reliable.

As we've pioneered red transit lanes for American cities on an experimental basis, we've found that the treatment reduced driver violations by up to 55 percent, collisions by 16 percent, which helps keep Muni moving.

SF's transit-only lanes (red or not) are off-limits to people driving and biking – except for the three types of cases below.

When Entering a Transit-Only Lane is Allowed

People driving and bicycling are only allowed to enter a transit-only lane when necessary to make these maneuvers:

At intersections and driveways, people driving and biking can make right and left turns, with some conditions.

Right Turns: When preparing to make a right turn, safely enter the transit-only lane as you approach the intersection or driveway (as you would with any right turn).

Red transit lanes are often dashed approaching intersections to make it easier to see where you can enter the lane before making a turn.

Left Turns: For transit-only lanes in the center of the street, the same rules generally apply. However, left turns are restricted in some locations – look for street signs that indicate when and where left turns are prohibited.

As noted, drivers may enter a transit-only lane to pull in or out of a curbside parking space next to the lane.

We hope that helps set the rules straight for the next time you're driving or biking on a street in SF with a transit-only lane.