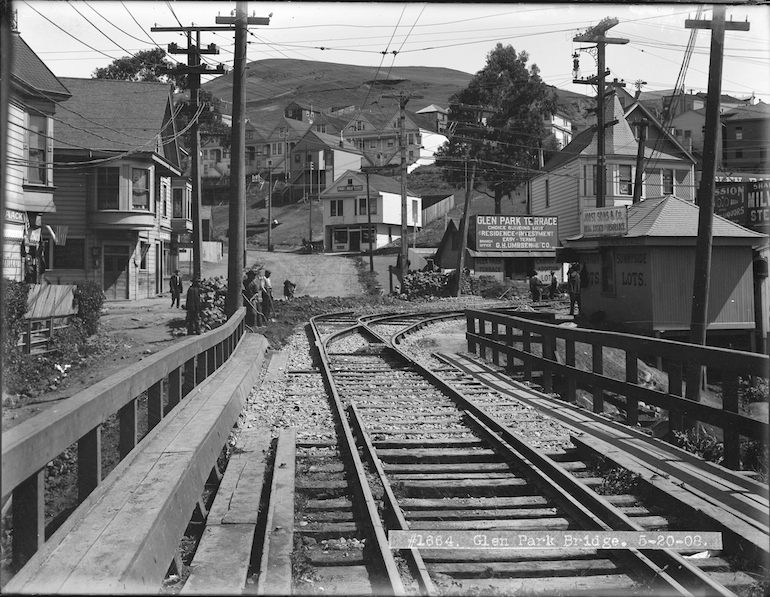 "Downtown" Glen Park in 1908, as seen looking north from a rail bridge built for San Francisco's first electric streetcar line along what is now Diamond Street towards Chenery Street. Most of the buildings seen here are still standing today.

San Francisco's first electric streetcar line opened 125 years ago today on April 27, 1892. Operated by the San Francisco & San Mateo Railway Company (SF & SM Ry.), this pioneering line had a lasting imprint on transit in our city that continues to this day.

The SF & SM Ry. line ran from Steuart and Market streets through the South of Market and Mission districts via Harrison Street, Guerrero Street and San Jose Avenue to Glen Park, and ended at the cemeteries in Colma.

The line was made viable by the advantages electric streetcars provided over horse-drawn vehicles and cable cars, which were the predominant means of transportation at the time. They cost less to build and operate, could carry more passengers and traverse much longer distances at higher speeds. After they were proved to be a practical way to improve and expand public transit by inventor Frank Sprague in 1888, they came to dominate the transit scene around the world by 1900. 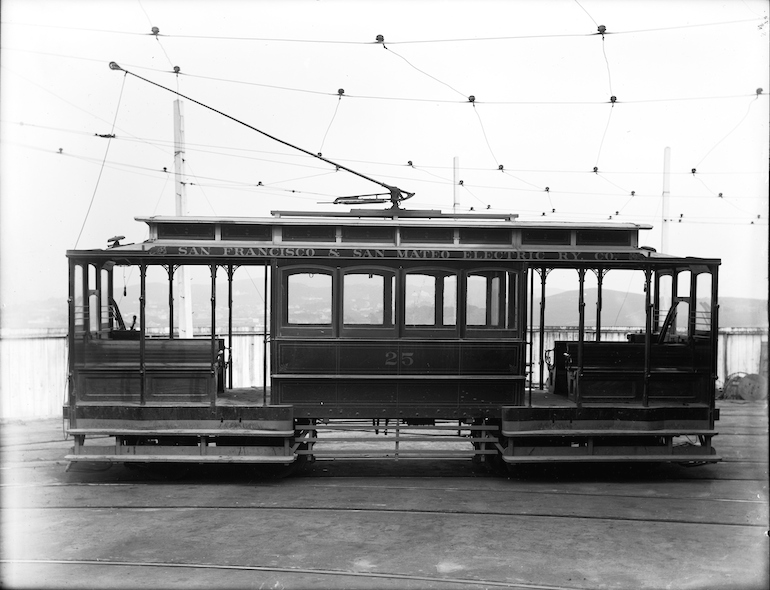 This shot, taken in March 1903, shows one of the first electric streetcars to run on the streets of San Francisco.

The SF & SM Ry. was founded by three brothers – Behrend, Isaac and Fabian Joost – who built the line to serve their isolated properties in the south-central part of San Francisco that included the neighborhoods we now call Glen Park and Sunnyside. Their hope was to profit from providing a modern, reliable transit service through the area and selling off properties served by the line after they increased in value.

In late 1892, the company opened a second line on 18th Street, which established parts of the same route as today's 33-Ashbury-18th trolley bus. This secondary line connected Twin Peaks, Upper Market and Ashbury Heights to the Mission and downtown via the company's main line, but unlike the 33, it ended at Frederick and Ashbury Streets and didn't serve Golden Gate Park.

Unfortunately for the Joosts, their transit venture never made much money and despite reorganization and expansion, SF & SM Ry. was sold in 1896. By 1902, the lines, facilities and equipment were all merged into the United Railroads Co. (URR). With its new monopoly over transit in the city, URR modified, extended and improved both of the former SF & SM Ry. lines to attract more riders. The line to Colma was realigned via busy Mission Street and extended to downtown San Mateo to form the 40 San Mateo, a profitable inter-city streetcar line that survived until 1949.

Despite the short life of the SF & SM Ry., the electric rail infrastructure built by the Joosts left a lasting impression on the shape of our city's public transit network. Muni's 12 Folsom/Pacific and 36 Teresita routes, as well as its J Church Line and BART's Peninsula lines all follow parts of that first electric streetcar line. Streetcars remain alive and well in San Francisco, with historic cars running on the F Market & Wharves and E Embarcadero lines and their modern-day descendants, light rail vehicles, serving the Muni Metro system.

Get your fix of transit history photos by checking out the SFMTA Photo Archive online and by following us on Twitter and Instagram.